When it was released May 2, 1997, there was no reason to think Austin Powers: International Man of Mystery would be a worldwide sensation. Test audiences gave it piddling scores. Its premiere at the Chinese Theatre was such a sleepy affair, nobody even bothered to take Seth Green’s photograph (“It felt like it wasn’t happening,” he recalls).

The New Line Cinema film performed respectably, if not spectacularly, in U.S. theaters — grossing $53.9 million, off a budget of $16.5 million — but Princess Diana’s fatal car crash that August didn’t help set the mood for its Sept. 5 U.K. release (even though filmmakers cut the joke about Dr. Evil blackmailing the royal family), and the overseas grosses topped out at a measly $13.8 million.

But thanks to the miracle of home video — and a flashy new 1990s gadget called the DVD — Mike Myers’ defrosted British spy would soon find an adoring audience and become one of the most beloved spy spoofs in Hollywood history, spawning a three-film franchise that would ultimately gross nearly (pinky to lip) a half-billion dollars.

Now, 20 years later, more than a dozen members of the cast and crew — including the famously press-shy Canadian comedian who invented the character — reveal to The Hollywood Reporter how the film came to be, from the inspiration for the shushing scene to how they shot that shagadelic sequence of Elizabeth Hurley eating a sausage (which nearly earned the picture an R-rating). 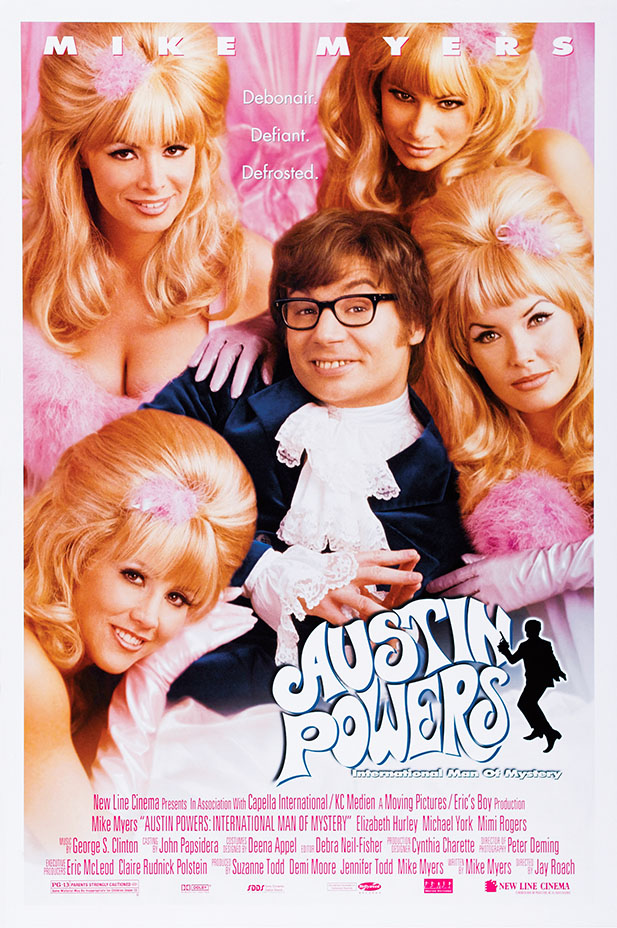 I wrote it in 1995, and the bones of the script came out in two weeks. It was one of those things where I didn’t know if anybody would get this movie who didn’t grow up in my house. But when I showed it to [director] Jay Roach — we had met at a party and become movie buddies — he gave me 10 pages of typewritten notes. Everything he said made it better.

Jay Roach, director I was just doing it as a friend. I tried to tighten it conceptually.

Myers Jay and I would sit around and think, “What if Austin Powers were based on an obscure British comic book that we were turning into a movie?”

Roach We never wanted to mock anything as a parody, but rather say we freaking love the look of those old films. He had shopped it around. I know it had been rejected by a lot of places.

Myers I was going to get it made somehow, even if through obscure financing methods. Then Mike De Luca read it and invited me over to meet the whole team at New Line.

Michael De Luca, then-president of production at New Line Austin Powers was blazingly original. At the time, a lot of the studio comedies were sitcom-y and the same thing over and over again. This really distinguished itself.

Myers Basically, he said, “I don’t want you to change a thing.”

De Luca I loved Mike and his stuff on SNL. So when I read the script, I could see him being the character. And he made it really easy for us. He came in and did the character — he wasn’t wearing a costume or anything — and really fleshed it out for us.

Roach There were still questions whether it would get greenlit even though they had optioned it and a part of that was waiting to see who the director was.

Myers Then it became the process of convincing New Line that Jay, who had only [produced] an independent movie about Hitler [The Empty Mirror] at that point, would be a good choice to direct.

Roach Mike goes, “Actually, I already put you up for the job.” And in a big room with lots of people, [founder and former CEO of New Line Cinema] Bob Shaye, rightly so, said, “Who are you? We’re not just going to hire Mike’s buddy.”

De Luca His directing reel was bizarre. It just wasn’t a good reel. It was very low-rent. But he came in and spoke about the movie and looked us in the eye and gave us his vision. And that is what got him the job.

Myers I was so excited, I jumped in the pool with all my clothes on.

Roach Once I got it, I presented storyboards for the fembots, based on the Castle Anthrax scene in Monty Python and the Holy Grail, when Sir Galahad is nearly thwarted by a group of seductive-looking women. I got Shaye and De Luca laughing, and they said, “OK, we’ll greenlight it for $16.5 million and not a penny more.” Then we started casting.

Myers I always loved the “We’re not so different, you and I” scene. That was the main reason I wanted to play both Austin and Dr. Evil. The Dr. Evil voice is a little bit Lorne Michaels, there are no two ways about it, but there is a lot more Donald Pleasence in there than Lorne. Lorne has a pinky thing, but he doesn’t do it anymore.

Elizabeth Hurley, “Vanessa Kensington” My agent called and said Mike Myers wanted me to star with him in a new movie. I was with my then-boyfriend Hugh Grant, who punched the air with excitement. He said Mike was one of the funniest comedians on the planet. 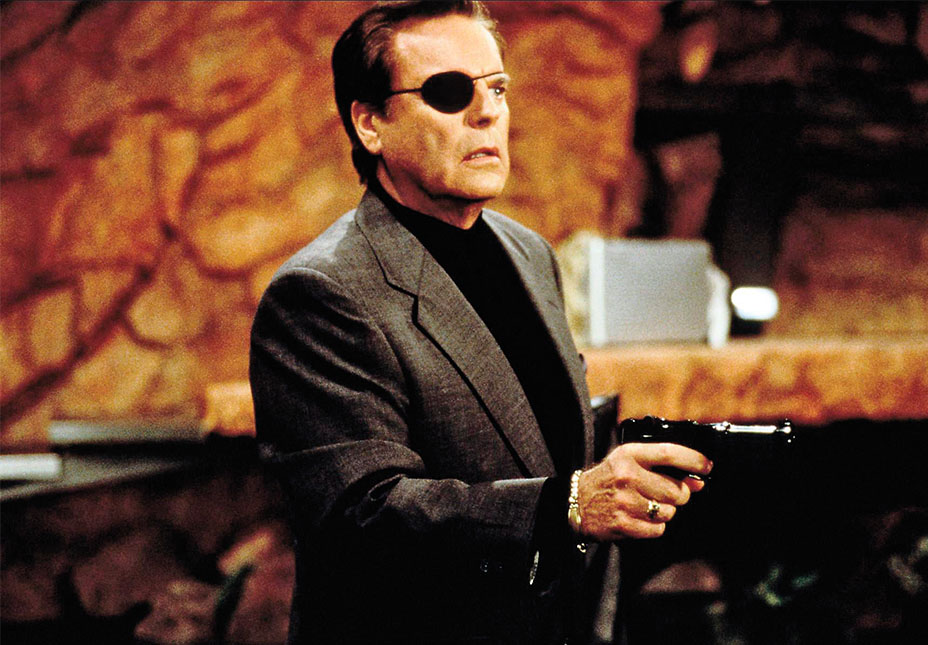 Robert Wagner, “Number Two” Mike wrote Number Two for me. The script hit the door, I read it and I just thought it was fabulous. It was a very provocative, dangerous thing to do, and I just embraced it from the beginning.

Seth Green, “Scott Evil” I got the script for Carrot Top’s Chairman of the Board and Austin Powers in the same week. I was doing a Mamet play at the time, so my head was in a spot about actor preparation, and all of my thoughts in respect to this character were to play it deeply sincere. I thought that would be funniest next to Mike’s broad character. If you look at me in the movie, I am in a drama.

Michael York, “Basil Exposition” Throughout my career, I have always relied on instinct and there was something about Austin Powers that really appealed.

Mindy Sterling, “Frau Farbissina” I met Mike when he came and did some improv shows with us at the Groundling Theatre and he tried out Austin Powers. I think Jay saw that particular show, and I must have done some kind of German woman. They asked if I would come in and audition.

Mimi Rogers, “Mrs. Kensington” Initially, they were talking to me about playing Alotta Fagina, but I was doing something where the dates couldn’t work. So it ended up being Mrs. Kensington.

Larry Thomas, “blackjack dealer” My manager kept calling and told me Mike Myers wrote this film called Austin Powers and there was this really fun character called Number Two. They didn’t have an answer from their celebrity offer, and I was halfway there when she told me the celebrity offer was taken, but they wanted to offer me a cameo because they liked me as the Soup Nazi in Seinfeld.

Clint Howard, “radar operator” It was a simple thing. Jay explained to me they were kind of doing a goof on the Apollo 13 flight control guy.

Roach Everything was shot in L.A. on backlots except the Vegas stuff. Outside Dr. Evil’s lair was Red Rock; we shot right outside Vegas. I think the main backlot at Paramount was the one we used to set up that whole opening Carnaby Street scene.

Myers The song “Soul Bossa Nova” was on a game show in Canada called Definition. It was just swinger music. Quincy Jones had to remaster it, I remember, because it speeds up and slows down.

Quincy Jones, musician, composer I wrote “Soul Bossa Nova” in 20 minutes 55 years ago, and it just keeps resurrecting itself. I worked with Mike when I hosted SNL in 1990. We became friends, so when they reached out to ask for permission to use the song, I happily agreed.