McG is known for commanding productions where hundreds of millions are on the line, so fear is not a trait you’d associate with the director. But he says that a phobia of flying that cost him one of the highest profile jobs in the business: directing a Superman movie.

The filmmaker behind Charlie’s Angels, Terminator Salvation, This Means War and the new Netflix film The Babysitter started developing anxiety disorder when he was around 16 years old, and part of that manifested in a phobia of flying. He was able to shoot the Charlie’s Angels movies in California, but turned down chances for world travel that came with the movie.

Rian Johnson Is "Pushing" for 'Glass Onion' to Return to Theaters, Wants Longer Run for Next Sequel

“It was sad and difficult, because Prince Charles would call and ask the girls to come to Buckingham Palace to watch the movie. I’d be invited and I wouldn’t be able to do any fun things like that,” McG tells Heat Vision. “So it was really embarrassing and emasculating and not fun. It all sort of culminated when I was working on Superman with J.J. Abrams.”

After the success of Charlie’s Angels, he was hired to direct Superman: Flyby for Warner Bros., based on a script by Abrams. Abrams was writing the script and the studio wanted it for a 2006 release. The catch? He’d have to shoot the film in Australia.

The day came to take the Warners‘ jet to Australia, and he couldn’t bring himself to go.

“It was very humiliating, and I got thrown off the movie that day,” says McG, who got professional help after the incident. “It just sort of resulted in my going to see two ladies who specialize in this sort of thing at UCLA and I slowly put one foot in front of the other and I’ve now been around the world many, many times and fly all over the place and try to never go two weeks without getting on a plane.”

Now McG has channeled getting over his fears into his latest project, The Babysitter, streaming Friday on Netflix. The horror-comedy movie follows Cole (Judah Lewis), a boy who is afraid of everything — from driving lessons to being left home alone — and is one of the last kids his age to still need a babysitter. Unfortunately for him, his babysitter Bee (Samara Weaving) has a taste for murder and satanic rituals.

In a conversation with Heat Vision, McG also talks about his buzzy producing projects he’s producing through his Wonderland banner (True Lies, The Amy Schumer movie I Feel Pretty) and why now was the right time to go from making $150 million blockbusters to a smaller scale project for Netflix.

Your young star Judah Lewis is quite good. How did you find him?

It was a lengthy, lengthy experience, sort of interviewing every kid you could find the world over. You just need that magic in a bottle. You see it in Stand by Me. Those kids obviously went on to do great things. Obviously the kids in Stranger Things. Then here come the kids in It. I just knew with Judah he was special and wise beyond his years and he had a sense of humor and a kindness and an empathy, where I found it very easy to root for him and thought he would make a great Cole. 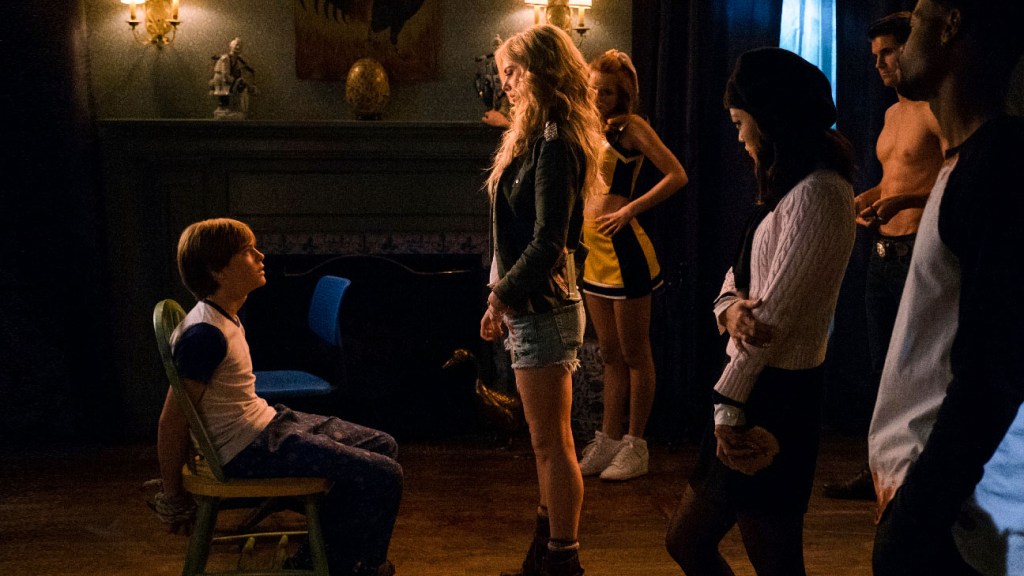 Do you have thoughts for a sequel?

We definitely have designs on a sequel, but that’s up to the audience. I think it’s presumptuous if people plan on sequels prior to being corroborated by the audience. We definitely have an idea, and I have a couple of stories I’d like to tell in that regard, but I defer to the appetite of the audience. For me, it was just a fun film to make. I got my start from Quentin Tarantino, who brought me over to A Band Apart, the company he had with Lawrence Bender. I was making music videos and commercials for him. He’s a tremendous influence and this is the closest … film I’ve been able to do that shows how much Quentin means to me. It’s a little bit of a grindhouse movie, and it’s definitely a mashup of styles.

This is a much smaller scale movie than something like Terminator Salvation or Charlie’s Angels. More and more blockbuster directors are scaling down these days. Is that a function of the industry changing?

When I was getting going in 2000 and 2003 with the Charlie’s movies and into Terminator and We Are Marshall with McConaughey, and even This Means War with Reese [Witherspoon] and Tom Hardy and Chris Pine, that was an era when everything was happening at the movie theater. And that was kind of pre-Game of Thrones and everything else was happening in a television capacity. It was also a time when you had to be a rich person to have a big screen television hanging on your wall and surround sound. Naturally all of those changed. There’s so much quality happening in a Netflix capacity, in an HBO capacity on all the outlets frankly. And still great stuff happening in the theater. So I try not to limit myself.

You rebooted Charlie’s Angels for film and Lethal Weapon for TV. You are producing a True Lies TV show and directing the pilot. Where are you in that process?

I got the outline yesterday. Our hope is to shoot that in the new year. It was tough to figure out how to do Charlie’s Angel when I did it. “Oh the TV show is sacred, you can’t play with that.” And I thought we had an interesting way in with those girls at those times. Now I think Elizabeth Banks will find an interesting way in on her terms [for her own Charlie’s Angels movie]. The same thing with Lethal Weapon … Now we go again with True Lies, which I think is an evergreen concept. Fundamentally, you think you know everything about your spouse or partner, and you come to realize you don’t. I think we are all guilty of that, and that is fuel for an interesting story.

I imagine it’s updated for now from what it was in the ‘90s.

Absolutely. I think that’s the trick, understanding what to do that honors the original idea but how to do it in a way that feels decidedly 2018.

You’re producing When We First Met, which stars Adam Devine as a guy who is able to go back in time to the night he first met his dream girl. What made you want to work with him?

I’m just a huge fan of new voices. I was excited about Tom Hardy when he was only making British films at the time and I thought he was amazing. … You look at Adam and Workaholics and everything he is doing with his comedic voicing, I thought it would be a great opportunity to make a film he is starring in. I feel the same way about Amy Schumer. We just wrapped photography on a film we produced.

The Amy Schumer film, I Feel Pretty, is out in 2018. What’s the message of that?

The message of the film is very simple. Amy Schumer’s character bumps her head falling off a bike at SoulCycle and all of a sudden, she thinks she’s beautiful, but nothing’s changed. And the irony, of course, is the world does change in the way that it responds to her, just as a function of her changing the way she sees herself. And that’s the message. It’s about how you feel, it’s not about how you really look. … Beauty is interior and that was the message of the movie and I think that’s custom tailored to what Amy brings. And hopefully people come to realize that.

The Babysitter is streaming now on Netflix.