In late 2014, Paul Verhoeven began to experience pain — deep, searing migraines that struck him at all times of the day and night. He consulted doctor after doctor, underwent test after test at home in Los Angeles and at his pied-a-terre in The Hague, Netherlands, and yet no cause was found, no explanation given. Then the headaches vanished as mysteriously as they had arrived.

Was it a coincidence that the problems began after Verhoeven, 78, agreed to direct his first feature film in a decade — Sony Pictures Classics’ Elle, a provocative drama starring Isabelle Huppert, 63, which opened Nov. 16 in Los Angeles — and after he learned the movie would be shot in French, a language he had not spoken with any frequency for 60 years?

“It was fear,” he acknowledges, sitting in the airy living room of his Pacific Palisades home one October afternoon, projecting very little fear at all. “Ultimately, when I started to realize I could do it, [the headaches] disappeared. It was undoubtedly stress.”

He bends toward a large, timid golden doodle that has just loped into the room. “It took him a while to feel safe around men — even me,” says the director.

In 1985, the couple and their two daughters started their lives anew in Los Angeles (one daughter is now a professor of revolutionary terrorism at Cornell, the other a painter), where the director switched styles, becoming an A-list helmer known for elevating genre movies such as 1987’s RoboCop and 1990’s Total Recall with a unique visual flair and electric wit. From the late ’80s to the mid-’90s, he was among the most successful artists in Hollywood. Then came 1995’s Showgirls.

The drama about women trying to make it in Las Vegas was a financial flop and critical bomb (“A film of thunderous oafishness that gives adult subject matter the kind of bad name it does not need or deserve,” said Kenneth Turan of the Los Angeles Times). The $45 million movie made less than half of that domestically. “It was difficult for people to accept this movie in any way,” says Verhoeven. After that, “I was in Hollywood prison.”

He laughs it off, then reaches down for the coffee and cookies his wife has just brought us, and runs his hand through his iron-gray mane of hair. If the Showgirls fallout still bothers him, he doesn’t reveal it.

Verhoeven followed that with Starship Troopers, a film about humans fighting killer bugs. “We were using the original story [in Robert Heinlein’s novel] and commenting on it, which was subversive,” he says. He adds that he has no interest in the remake. “They want to go closer to the novel. We had a discomfort with it. We didn’t want to say this military-fascist utopia was good.”

Even as Starship was being condemned, Verhoeven’s intellectual pursuits were tugging him away from the Hollywood mainstream.

Since the mid-1980s, he had been a member of the Jesus Seminar, a somewhat controversial collection of theologians who wish to place Jesus in his context as a man — a great one, but not the son of God. “They had started to study the historicity of Jesus’ actions and words,” he explains. “I thought, ‘OK, I should join them,’ because I wanted to make a movie on what really happened, and not even what the Gospels tell me.”

He has yet to make his Life of Jesus, which would portray Christ, warts and all. “[Christ] was drinking a lot and liked to eat,” the director notes. “That should be seen. And he was an exorcist, a real one.”

Verhoeven spent years researching that subject and continued to do so during the fallow period after his last American film, 2000’s The Hollow Man, an Invisible Man update starring Kevin Bacon that Verhoeven clearly abhors. “I’ve never done a movie that in retrospect I cannot defend,” he says. “I can defend Showgirls, but not Hollow Man.” 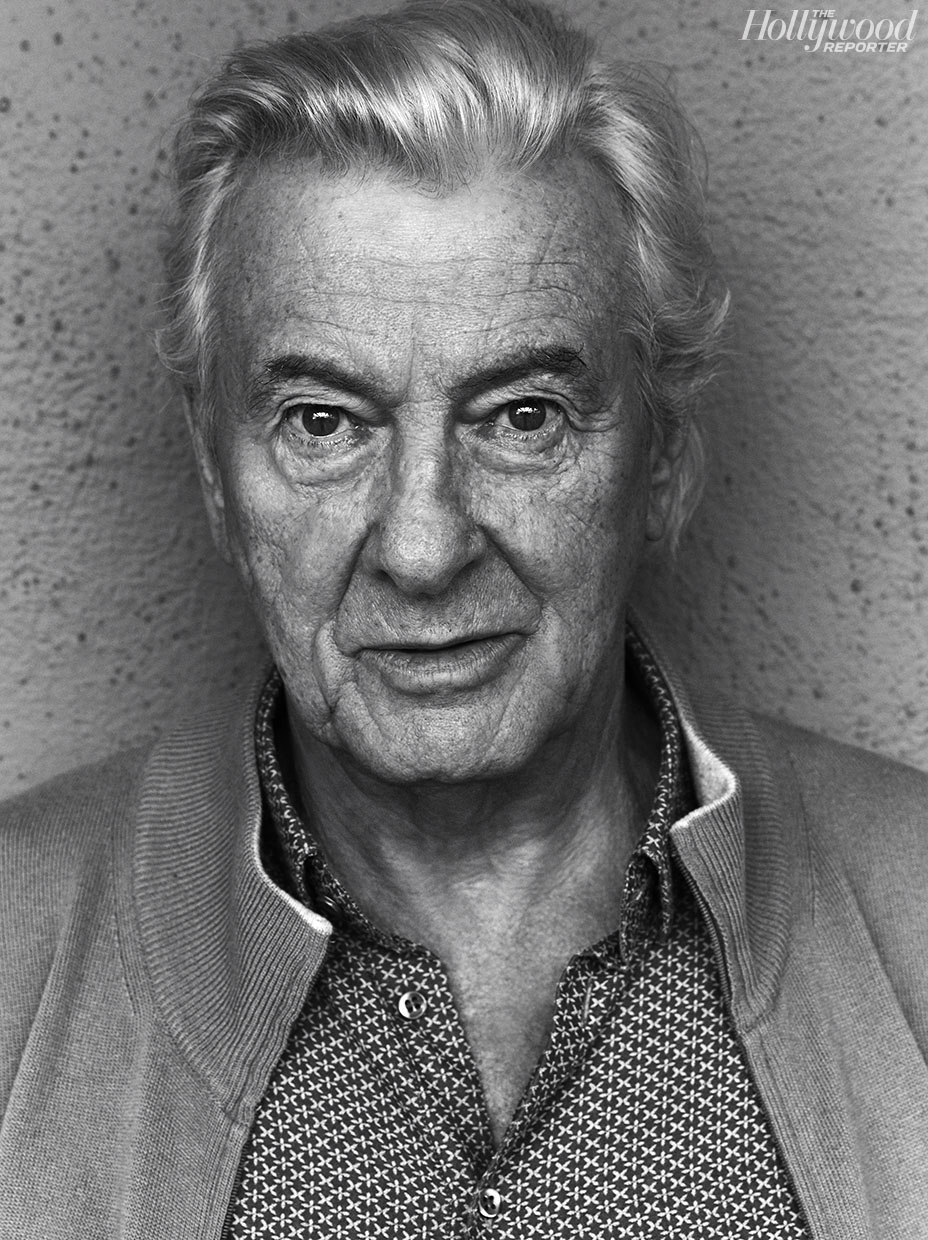 His last movie before Elle was 2006’s The Black Book, about a Jewish woman who joins the Resistance in Holland and falls in love with an SS officer. It is as troubling as it is entertaining, pushing on the side of its charismatic Nazi, even as we know he has been part of the genocide machine.

Verhoeven seems strangely blinkered to the ethical dilemma his hero poses. “People are good and bad,” he says. “You cannot say all Nazis were horrible and all the Resistance good. This was based on a real character who was called ‘the Soft One,’ because he was a very decent man.”

It’s late afternoon as we talk about the film, and I ponder what he has just said. Some part of me understands, another part wonders — a good Nazi?

I try to make sense of this brilliant but confounding man, as his dog wanders back, eyes me warily and sniffs my recorder. It strikes me what a gulf there is between the man I’m sitting with and the more turbulent artist inside. Huppert speaks of his “real delicateness. He’s the complete opposite of his films.”

The comfort of his home seems poles apart from the uncomfortableness of his films — as if the duality we find in his movies has its best embodiment in Verhoeven himself. He has created an outer life that’s almost at odds with his inner one. It’s a theme he plans to explore further in other pictures, now that he’s back behind the camera. And he has no plans to let Hollywood derail him again. “They applaud comebacks here,” he says happily. “You can fall as deep as you want. But if you come back, you’re OK.” 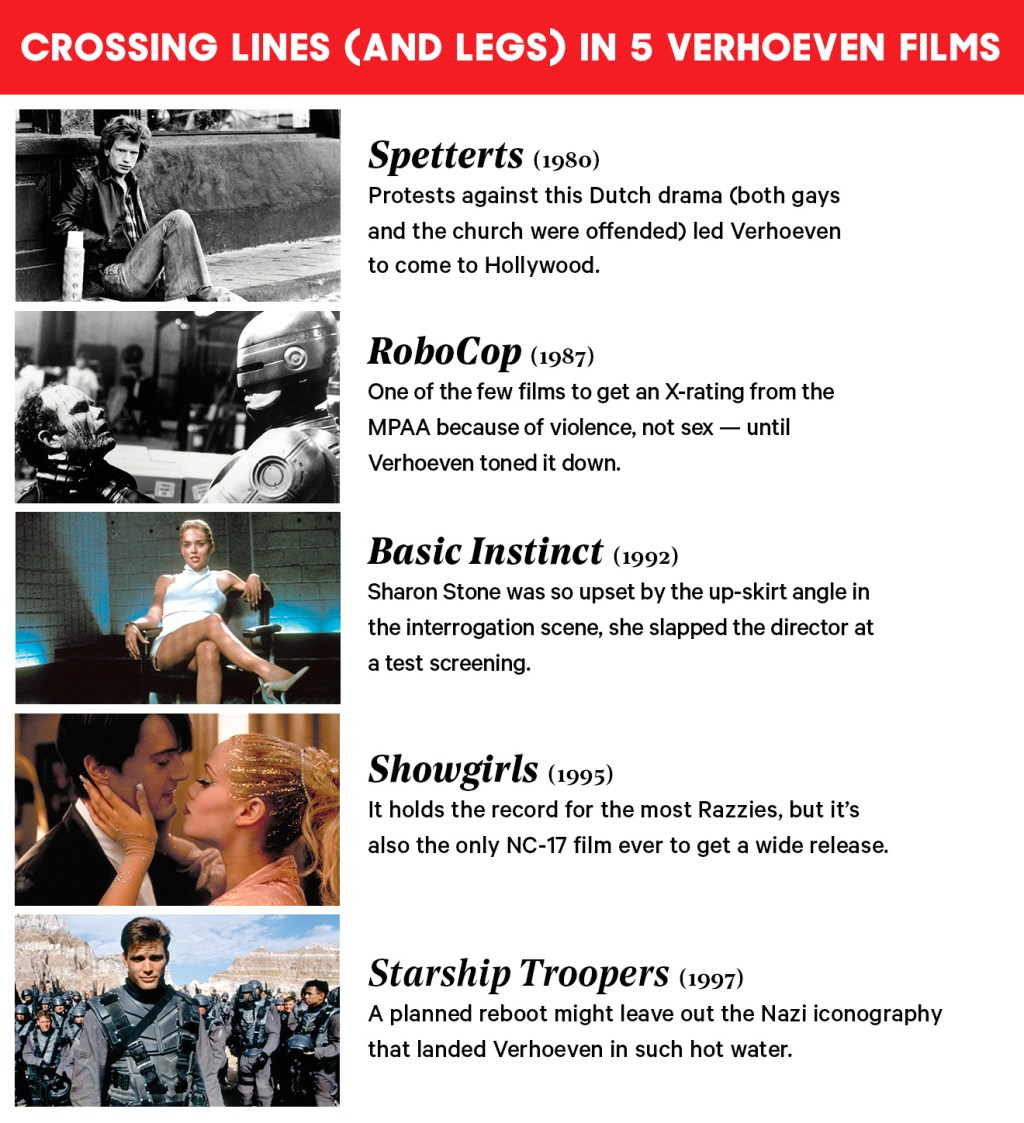