How does a mild-mannered software developer by day transform into a superhero news vigilante by night?

For Chris Begley, the 29-year-old founder of the news-driven fan site Batman-News, all it takes is obsessively consuming the news, furiously writing during his lunch break, and staying up all night after work to pump out story after story and tweet after tweet.

Since launching in 2010, Batman-News averages 2 million page views a month, while its Twitter handle boasts 94,000 followers. Perhaps more impressive is the level of engagement among its readership. Articles garner hundreds of comments, while a link from Batman-News can move the needle on much larger and more established sites.

Begley scours the Internet for news constantly, and has an army of readers who will tip him off for news that might be buried in long interviews on other sites. The Batman director Matt Reeves has dropped Ben Affleck’s script? Batman-News surfaces that comment from Reeves’ lengthy MTV podcast interview and the next day it is everywhere on more mainstream entertainment news outlets.

The website’s success comes from an obsessive drive that means Begley, who has a day job as a software developer in Connecticut, rarely goes anywhere without his laptop and at times turns down social invitations in favor of working on the site. Like many superheroes, he loves and believes in what he does, but feels a sense of burden as well.

“This is kind of sad, but it’s true. I go out to dinner, I’m freaking out about what’s happening in the news world. The news is 24/7,” says Begley. “I’m always on the edge. That’s probably the worst part about it. It’s fun, but I would like to have more free time.”

Begley likes to stay near his Batcave. He hasn’t been on a plane since he was a kid, but he is making an exception and will be coming to Los Angeles for Monday’s Justice League premiere. As part of a promotion, Gillette is capitalizing on his readership by footing the bill in exchange for coverage of the company treating him to a red carpet-worthy shave to get him ready for the premiere. He’s had luck with other sponsors as well. He’ll be wearing a custom Justice League suit, provided for free by Fun.com, and was sent a 4K TV from TCL after saying he’d love to watch Wonder Woman that way and would give the company a plug with his readers.

“I’m going to be meeting so many people for the first time that I’ve talked to for years in some cases,” Begley says of finally making it out to Los Angeles, where he’ll touch base with contacts he’s made through his site.

Begley’s love of Batman goes back to when his cousin gave him a toy at age five.

“I’ve never been a huge sci-fi fan and I like that Batman is just a man,” says Begley. “He doesn’t rely on superpowers. He’s extremely smart and trained himself to be the crime fighting machine that everyone knows.”

When Begley first started writing about superheroes in 2010, Los Angeles Times’ blog Hero Complex was the gold standard for Batman news, thanks to founder Geoff Boucher’s cozy relationship with Dark Knight director Christopher Nolan, who gave him the best access of anyone. Begley had spent years frequenting message boards, devouring every scrap about those films, and felt there was no one place that tied all the news together. So he decided to build one.

Batman-News launched in September 2010, and came into its own the following summer as Nolan began filming The Dark Knight Rises. Just eight months after launching, Begley marked his first 1 million page view month, courtesy of the first photo of Tom Hardy as Bane, which was juiced by Kevin Smith tweeting a link to the story.

“It just snowballed from there. I was covering the Dark Knight Rises better than anyone,” says Begley. “I was just posting every little piece.”

He remembers his success and failures vividly. In 2013, when Affleck was cast as Batman in Batman v. Superman, Begley wasn’t by a computer and was 40 minutes late posting the news. “I was furious at myself,” he recalls. A year later, his cousin asked him out to dinner — and he was hesitant to go, feeling the whole time he would miss something. As soon as they left the restaurant, he saw the news that Jared Leto would be playing The Joker in Suicide Squad. (He typed up a story from his cousin’s nearby home.) But the most life-altering of these disappointments came at 1 a.m. one morning in 2015, when Zack Snyder shared the first photo of Jason Momoa as Aquaman. Begley was asleep and missed it. Now he doesn’t allow himself to sleep until after 2 a.m., when he feels he won’t miss anything from the West Coast.

Joshua McDonald, a freelance comic book reviewer for Batman-News, notes he’d often file pieces at midnight from Los Angeles, and Begley would still be up, working away.

“There had to be plenty of times where it was 3, 4 a.m. his time and he’d respond right away to my emails,” notes McDonald. “Even early mornings, when the studios were going to release something, he’d stay up.”

To build a successful following in the fan community, you usually must have one or more of the following: the ability to generate scoops, access to talent, provocative opinions or an entertainingly pugilistic online persona. For the most part, Begley does not fall into any of the above categories.

“Most fan sites are about the writer shoving their opinions on people,” says Nashville-based Batman-News reader Jason Castleman. “Chris really sticks to delivering news and letting the readers discuss their opinions on it. That is a breath of fresh air compared to most comic book/superhero sites.”

Anton Volkov, founder of the trailer-focused site Trailer-Track, notes that the Begley’s solo operation allows readers to feel a greater connection to the site as a whole. On some sites, readers might be loyal to a prominent writer, but not the brand. Not so with Batman-News.

“When you  have a site that has this personal identity and ability to interact with everyone, it’s brilliant, because this sort of engagement as a website as opposed to an individual writer is kind of rare,” says Volkov. “These interactions do have this huge added benefit of building up a far more dedicated audience and a reputation for the site itself.”

Begley has noted that fandom has become divided since the Nolan days, when there was less turmoil behind-the-scenes in the Batman universe. Some readers publicly stated they were going to stop reading Batman-News after it began covering the drama behind the DC movies last year, such as Suicide Squad‘s rushed production, or a THR story calling into question Ben Affleck’s future as Batman, or even on-the-record quotes from Affleck’s brother Casey casting doubt that the actor would play the part in a solo Batman movie.

“He loves DC. He’s a big Batman fan, but he knows DC fans freak out over everything. He takes advantage of that,” says a Batman-News reader with ties to Hollywood, who asked to remain anonymous to avoid the ire of the superhero community.

“There are people who 100 percent believe everything Ben Affleck says,” says Begley. “‘Oh, he went on the stage at Comic-Con and says he loves Batman, so he’s never going to stop being Batman.’ I always try to cover both sides, and of course I don’t want Ben Affleck to leave, but there’s been enough rumors that you have to assume it’s a possibility.” 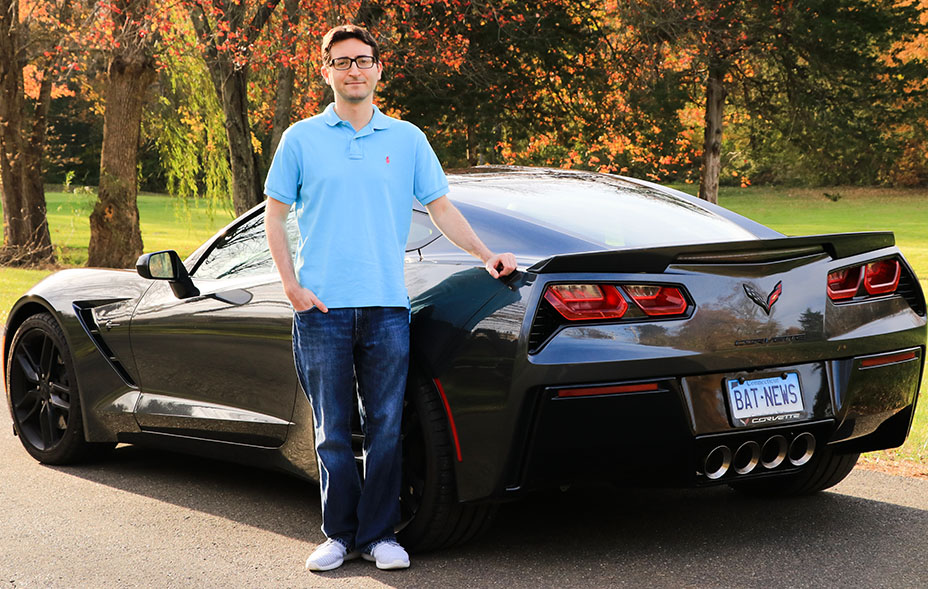 Begley declined to say how much money he makes from the site, but he did confirm it is profitable. He was able to purchase his dream car, a 2017 Corvette Stingray Z51 using only earnings from the site (Kelley Blue Book value: $58,000). He admits he’s not a car guy, but he’s always thought black Corvettes looked like the Batmobile. His vanity license plate? Bat-News, naturally.

Save for a few freelancers who review the latest comic books, Begley is a one-man show, which means he is able to reap all of the rewards of that labor. Rather than pounding the pavement to sell ads on his site himself (or employing someone to do so), he uses Google AdSense, GumGum, and Sharethrough ad networks — which automate the process. A programmatic advertising approach seems to be working for a lean and mean operation like Batman-News, which counts on the popularity of superhero news to drive page views.

When Nolan’s Dark Knight trilogy ended in 2012, Begley thought Batman-News might slow down, so he launched Spider-Man News (to focus on a slew of Sony films that never materialized) and then Superhero News (to cover all things superheroes). He admits he’s largely a Batman fan, and created those sites more as a way to expand his little empire rather than pure love.

“Superhero News is basically a business decision. I’m not actually into superheroes, I really only love Batman,” says Begley.

But so far, even stories powered by all of Marvel’s and DC’s big-screen heroes haven’t been able to top Batman-News. The spinoff site gets about 300,000 page views monthly, but Begley is going to keep at it — and wonders if some day he could trade his day job for the sites.

“One day, Superhero News could be even bigger than Batman-News,” he says. “Maybe I do this full-time one day.”