Amazon’s issues at its streaming service call to mind the costly disaster that befell Japan’s Sony Corp. after it bought Columbia Pictures in 1989. Sony came to Hollywood facing a huge cultural divide, with little idea on how to navigate the treacherous waters. After Sony hired Jon Peters and Peter Guber, two producers widely known in the industry as operators hardly suited to such a job, their focus seemed to be on milking Sony. After Peters was eventually fired, he boasted that he personally had taken the Japanese for $100 million. When Sony finally rid itself of Guber, it incurred a $3 billion write-down.

Amazon Studios wasn’t run by hustlers, and its management backed several solid, well-reviewed series and films, winning two Oscars for Manchester by the Sea. But there’s been quite a housecleaning at the Santa Monica-based streaming service in recent weeks: Content chief Roy Price was ushered out Oct. 17 following allegations that he had harassed the executive producer of the Amazon series The Man in the High Castle. (Albert Cheng is running the studio on an interim basis.) Joe Lewis, the head of original series, soon followed, as did reality chief Conrad Riggs.

Amazon has shown itself to be formidable in many businesses, of course, but its delay in addressing manifest problems at its Los Angeles content studio — some of which it had known about for months, if not years — has left it to contend with some bad press and what insiders concede is a major rebuilding project.

The Sony and Amazon stories both illustrate one rule that hasn’t changed in Hollywood: When outsiders with big money venture into town, the community always finds a way to take advantage. And it’s easy to make a bad choice when newcomers look to hire executive and creative talent. Many in the industry can spin a good yarn about their key role in making hit movies or shows, but those tales don’t always withstand scrutiny. Only real insiders can see behind the curtain.

Price and some of his top executives had less experience than those typically charged with running a major studio. How did this happen? Several sources say the Seattle-based online giant’s overall approach to hiring, which involves an extensive interview process known as “the Loop” as well as a basic background check, is not designed for Hollywood. “It’s all about how you perform in interviews as opposed to doing a deep dive,” says one person with firsthand knowledge of the process. That helps explain, for example, why Lewis was hired in 2013 despite having exited abruptly at two of his previous jobs.

At Viacom, he is said to have departed after he was associated with the improper accessing of the computer of former Comedy Central chief Doug Herzog. Lewis then went to Fox and was out again in less than a year. In 2010, he decided to start a streaming startup called Bark Industries. It had not launched when Price hired him as head of comedy at Amazon. In October 2016, Lewis’ turf was expanded to include drama series, while previous drama chief Morgan Wandell — who championed such well-reviewed shows as Man in the High Castle, Goliath and Patriot — was moved to head of international. Wandell recently left for Apple.

At this point, several high-profile showrunners have spoken publicly and disparagingly about Amazon’s management of scripted programming under Lewis. David E. Kelley described the studio to The Wall Street Journal as “a bit of a gong show,” adding, “They are in way over their heads.” (Lewis did not respond to requests for comment; Amazon declined to comment.)

Also exiting Amazon Studios was Riggs, who had led the streamer’s modest push into reality programming since 2014. The producer, said to be a tennis pal of Price’s, arrived with a slim résumé and one huge credit: He had partnered with Mark Burnett in bringing Survivor to America in 2000. But while Riggs retains his co-executive producer credit, he hasn’t had any involvement in years. Riggs sued Burnett in 2008, pursuing more than $70 million in profits from their collaboration. The suit settled for an undisclosed amount four years later. In 2015, Riggs’ production shingle Cloudbreak Entertainment filed for Chapter 11 bankruptcy.

Amazon’s unscripted offerings under Riggs were slim. His biggest impact was helping shepherd a cast reunion of Top Gear after the core trio departed the British hit amid reports of abusive behavior by host Jeremy Clarkson. Amazon named its show The Grand Tour, which has already has been renewed through a third season. Riggs and Price also pursued a reality series about tennis star Novak Djokovic that fell apart after the champion washed out of Wimbledon.

Price, who hired both Riggs and Lewis, ended up atop Amazon Studios even though his previous experience in the business was a stint of about five years, ending in 2000, in Disney television animation. He arrived at Amazon in 2004, launching Amazon Video and then Amazon Studios. In July 2015, Amazon hired an outside investigator to look into allegations that he had harassed Man in the High Castle executive producer Isa Hackett. After the investigation, Hackett never saw Price at another event for her show.

Last spring, as I was looking into a story about Price and Lewis, I asked Amazon about alleged episodes of questionable conduct involving Price as well as Lewis’ apparent conflict of interest in pressing for the casting of his fiance, Yara Martinez, in the streamer’s series The Tick. Amazon declined to address specific questions.

Around that time, the same investigator returned to Amazon with a primary focus on Lewis. Both the company’s HR department and the investigator were told of incidents subsequently reported by THR, yet the company took no action for months, waiting until after a series of critical stories on the website The Information, in the Journal and in THR. When Price stepped down, Jeff Blackburn, a lieutenant of CEO Jeff Bezos, told staff in a memo, “Roy’s resignation followed new information that surfaced last week, as well as other factors.” Having maximized the negative publicity, Amazon was left to scramble.

It’s not surprising that this happened at the intersection of the tech industry and Hollywood. The digital giants have seen themselves as inventing new rules and operating outside old systems. In the entertainment industry as well as in other businesses, some rules and traditions may be anachronistic, but it turns out that other norms came into being for a reason. And when bad things happen, many in Hollywood sometimes take a grim satisfaction. I’m told some Amazon insiders have joked about sending a copy of Hit & Run, the book I co-wrote about the Sony debacle, to Bezos with a note reading: “Hint: You’re the Japanese.” 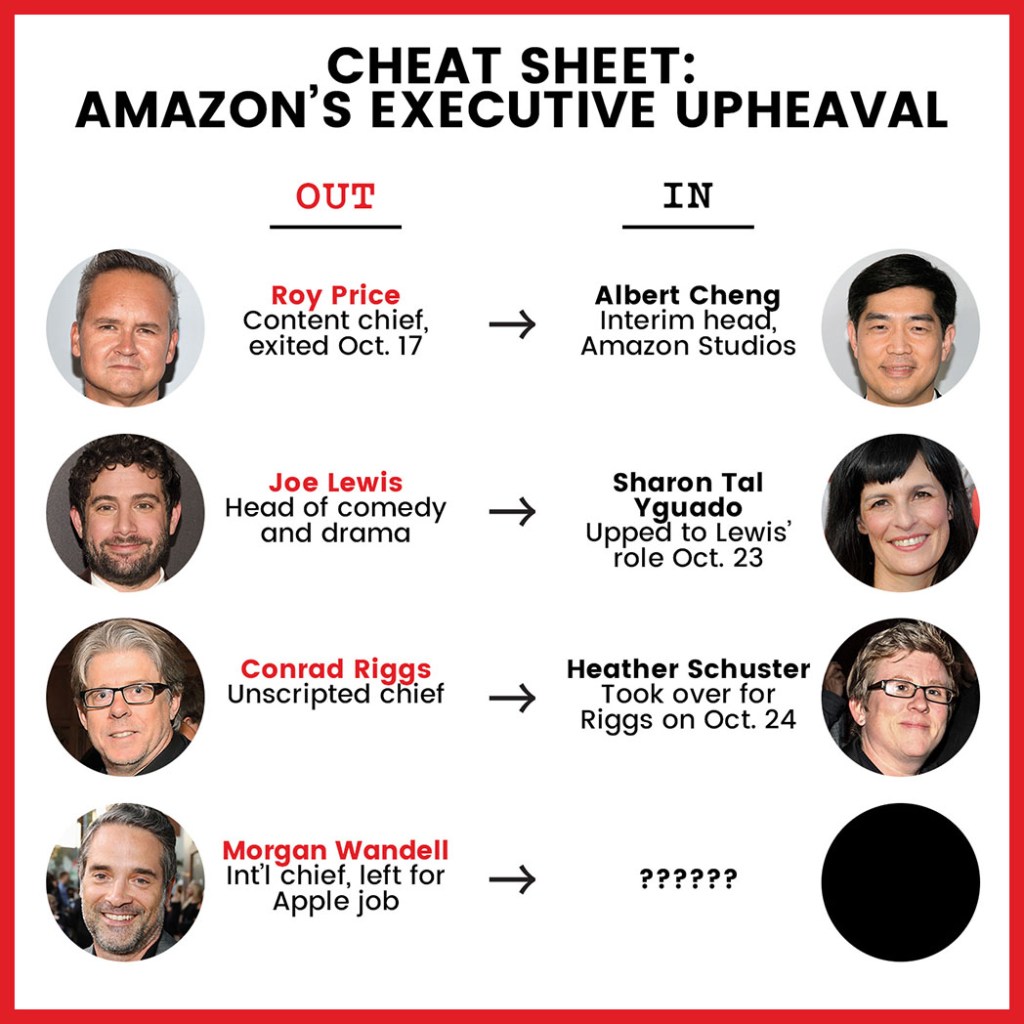