A new season is upon us, and with it comes not only a new year but a new decade. And that, of course, means new movies, some of which may shape the trends and franchises of the 2020s. Winter has become something of a haven for horror movies, and releases are only becoming more prominent as studios seek to provide a warmth from the low temperatures, warmth best provided by fear. While the ill-informed too often turn their noses up at the year’s early offering of titles, seen by some as counterprogramming to the awards-season fare and leggy Christmas releases, January through March has historically offered no shortage of chills. Over the past few years we’ve seen the likes of The Witch (2016), The Boy (2016), Split (2017), A Cure for Wellness (2017), Raw (2017), Get Out (2017), The Strangers: Prey at Night (2018), Escape Room (2019) and Us (2019) all add their screams to the orchestra of winter horror. From major studios to independent releases, new voices and favored auteurs, winter has become one of the most exciting times of the year for horror. And 2020 is no exception — and in fact may provide the best variety yet.

Bundle up, and take a look below at what’s to come.

What’s it about?: A new take on Takashi Shimizu’s Japanese horror classic Ju-On: The Grudge (2002), the story tells of a house plagued by a vengeful ghost who delivers violent deaths to all who set foot in it. The film stars John Cho, Andrea Riseborough, Demian Bichir, Betty Gilpin, Jackie Weaver and Lin Shaye.

What’s unique about it?: The latest iteration of The Grudge is produced by none other than horror legend Sam Raimi, who in recent years has brought us Evil Dead (2013), Don’t Breathe (2016), and Crawl (2019). The Grudge looks to fall in line with those grisly endeavors, and its R rating promises a film that’s far more shocking and hard to shake than the PG-13-rated American adaptation in 2004. Directing is Nicolas Pesce, who has made a name for himself on the indie horror circuit with The Eyes of My Mother (2016) and Piercing (2019). With creative voices unafraid to disturb audiences and a strong cast, The Grudge looks poised to start this year in horror off right.

What’s it about?: A group of aquatic researchers struggle to hold their underwater lab and sanity together after an earthquake, but quickly discover that something else is down in the water with them. The film stars Kristen Stewart, Jessica Henwick, John Gallagher Jr., T.J. Miller, Mamoudou Athie, Gunner Wright and Vincent Cassel.

What’s unique about it?: While there’s no escaping the similarities to Ridley Scott’s Alien (1979), something the pic’s marketing hasn’t shied away from, aquatic horror is still a bit niche and welcome within the genre. Underwater looks to deliver on the claustrophobic scenarios and creature effects that are enough to pull in any horror fan. Plus, who doesn’t want to see Kristen Stewart battle a sea monster? The movie is directed by William Eubank, who delivered the sci-fi gem The Signal (2014), in which he displayed a talent for creating interesting twists to familiar genre scenarios. 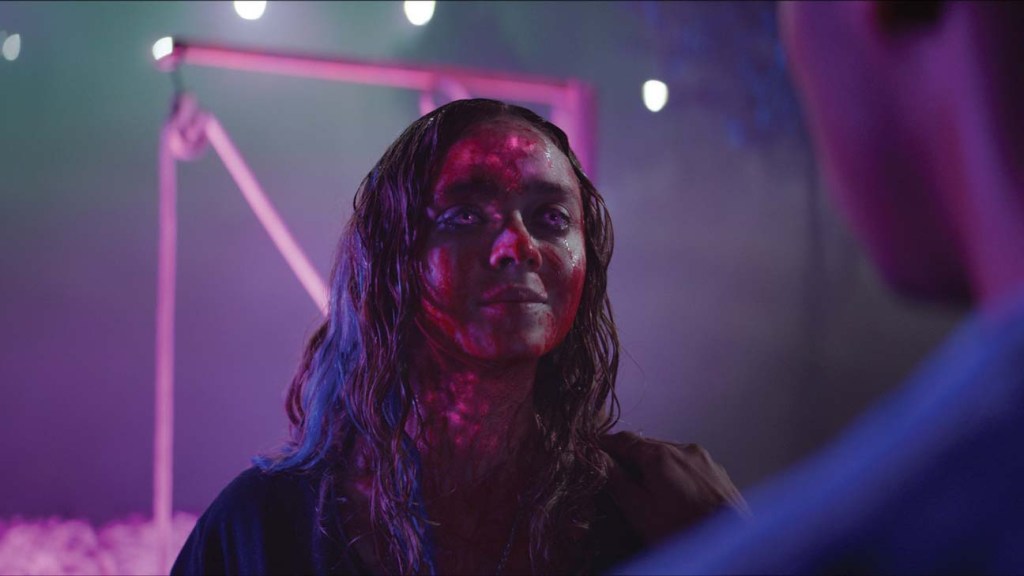 Color Out of Space (RLJE Films)

What’s it about?: Based on H.P. Lovecraft’s story of the same name, a town is struck by a meteorite of alien origin, one that starts to have a strange effect on a local family. The film stars Nicolas Cage, Joely Richardson, Madeleine Arthur and Tommy Chong.

What’s unique about it?: Everything. Color Out of Space is cult filmmaker Richard Stanley’s first feature effort since his troubled production on The Island of Dr. Moreau (1996). Lovecraft isn’t an easy author to adapt, and many who have tried have lost the voice of the work, but this film has quite the team behind it. Produced by Elijah Wood’s SpectreVision, who delivered glorious Nicolas Cage horror goodness with Mandy (2018), Color Out of Space seems likely to deliver a similar kind of artful insanity if the reviews out of the Toronto International Film Festival are any indication. While it may not be the biggest horror release of the winter, it’s practically guaranteed to be one of the most interesting.

What’s it about?: A young governess is hired to look after two children and becomes concerned they may be corrupted by a supernatural presence in this modern adaptation of Henry James’ novella The Turn of the Screw. The pic stars Mackenzie Davis, Finn Wolfhard and Brooklynn Prince.

What’s unique about it?: A passion project for producer Steven Spielberg and the first horror film he’s had a credited involvement with since Arachnophobia (1990), The Turning has all the makings of a great ghost story. While the most famous adaptation of James’ novella is The Innocents (1961), Floria Sigismondi looks to contemporize the story while still playing with the themes of the supernatural, seduction and sanity. The Turning marks the first of two Turn of the Screw projects in 2020; the second is Mike Flanagan’s The Haunting of Bly Manor for Netflix. As one of horror’s most examined stories, subject to many different interpretations, it will be interesting to see what new perspectives Sigismondi and Flanagan bring to the tale.

What’s it about?: A dark(er) reimagining of the Grimm’s fairy tale, a brother and sister encounter an ancient evil within the woods. The film stars Sophia Lillis, Sam Leakey, Charles Babalola, Alice Krige and Jessica De Gouw.

What’s unique about it?: Director Oz Perkins, the filmmaker behind the winter chiller The Blackcoat’s Daughter (2015), repositions the classic fairy tale as a coming-of-age story in which Gretel takes the focus rather than her brother. Grimm’s fairy tales have always been horrific, and Perkins’ film looks to cut away the softened edges and deliver a sharp and beautifully shot dark fantasy that could be this year’s answer to The Witch.

What’s it about?: A woman and her two soon-to-be stepchildren are snowed in at a remote cabin when strange events begin to drive the three apart and dredge up long-buried secrets. The pic stars Riley Keough, Richard Armitage, Lia McHugh, Jaeden Martell and Alicia Silverstone.

What’s unique about it?: Pushed from last fall to this winter for release, the second feature from Severin Fiala and Veronika Franz (Goodnight Mommy) has already drawn comparisons to It Follows, The Witch and Hereditary as the latest horror great following its premiere at Sundance. Said to be a slow-burn that is guaranteed to leave audiences debating, The Lodge is one best gone into as cold as possible.

What’s it about?: In this new spin on the 1977-1984 television series, Mr. Roarke makes the secret dreams of his guests come true at private resort. Those dreams subsequently become nightmares and the guests must solve the island’s mystery in order to escape with their lives. The movie stars Michael Pena, Maggie Q, Lucy Hale, Portia Doubleday, Austin Stowell, Ryan Hansen, Jimmy O. Yang and Michael Rooker.

What’s unique about it?: One of the most intriguing horror movies coming this winter, Fantasy Island looks to pull the rug out from under TV-to-film reboots and deliver a fresh and unexpected twist on the property. Director Jeff Wadlow, director of the cult slasher Cry Wolf (2005) and the more recent Blumhouse’s Truth or Dare (2018), is well adept at delivering engaging horror mysteries, and the scale of Fantasy Island suggests that he has some new tricks up his sleeve. This one looks to be a twisty ride promising to be just as fun as it is nightmare-inducing, and we have a sense you’d do best to avoid spoilers.

What’s it about?: A group of war veterans must defend their VFW post and a teenager against a gang of drug-addled punk mutants. The pic stars Stephen Lang, William Sadler, David Patrick Kelly, George Wendt and Fred Williamson.

What’s unique about it?: The third film from the revived Fangoria, VFW has all the makings of a midnight-movie classic in the vein of the ’80s pics so many horror fans love. Director Joe Begos, who impressed the indie horror circuit last year with the vampire film Bliss, returns with a film that seems practically dripping in punk-rock vibes and bloodshed. Following in the footsteps of John Carpenter’s Assault on Precinct 13 (1976) and Walter Hill’s The Warriors (1979), VFW promises to pack a punch with gnarly practical effects and some of our favorite genre-film character actors kicking ass.

What’s it about?: A woman believes she is being stalked by her abusive ex-boyfriend — only he’s supposed to be dead and no one can see him. The movie stars Elisabeth Moss, Oliver Jackson-Cohen, Aldis Hodge, Storm Reid and Harriet Dyer.

What’s unique about it?: With Dark Universe behind it, Universal seems ready to really put its weight into reviving its classic monsters, alongside Blumhouse. James Whale’s 1993 adaptation of H.G. Wells’ book of the same name is one of the best of the classic Universal Monster movies. This modern reimagining looks to make the character scary again while positioning the story squarely within contemporary social injustices of the #MeToo era. Leigh Whannell, who as a writer helped define the 2000s with Saw (2004) and the 2010s with Insidious (2010), may just do it again with The Invisible Man. He seamlessly blended sci-fi and horror with Upgrade (2018), and, with Moss as his leading lady, it’s hard to think of a better choice to lead us into a new age of gods and monsters.

What’s it about?: The Abbott family is forced to venture outside of their home while contending with creatures that hunt by sound and other new threats. The film stars Emily Blunt, Millicent Simmonds, Noah Jupe, Cillian Murphy and Djimon Hounsou.

What’s unique about it?: Shhh. After the runaway success of the first pic in 2018, John Krasinski’s sequel could end up being the biggest horror film of the winter and one of the biggest of the year. Mum’s the word in terms of plot specifics, but we’re betting that since Krasinski decided to return as writer and director, this sequel will offer much more than a repeat scenario of the original while still delivering on the must-see theatrical experience of the first.

Creepy kids, ghosts, nightmares, cults, witches, monsters and stalkers — the start of 2020 promises a diverse collection of studio shocks and indie anxieties worthy of marking your calendars in anticipation. So lock your doors, head to the movies and remember, it’s cold out there.