Anyone who’s read and listened to writer-director Christopher McQuarrie during his press tours for this year’s Mission: Impossible – Fallout and 2015’s Rogue Nation are well aware that every Q&A or podcast he does is like a director’s commentary in and of itself. So, some might be asking if there’s anything left to learn as the film hits digital (Nov. 20) and Blu-ray (Dec. 4). The Hollywood Reporter has reviewed an advanced copy of the Blu-ray, and it’s safe to say that the answer is yes.

Besides the film itself, the Blu-ray’s marquee attractions are its special features, including three full-length audio commentaries, as well as a deleted-scenes montage and isolated score track. The lead commentary that features McQuarrie and Tom Cruise is 2.5 hours of insight from the close friends and frequent collaborators. Within minutes, it’s immediately understood why Cruise and McQuarrie are embarking on their 10th collaboration together, Top Gun: Maverick. Earlier this month, Empire revealed that McQuarrie was rewriting the Top Gun 2 script, something Cruise eagerly mentions toward the end of the commentary.

At this same point in the commentary, Cruise starts to tease McQuarrie about returning for another go-round in the Mission: Impossible franchise, something the filmmaker laughingly tried to resist. While McQuarrie never intended to come back for another installment that is now Fallout, he playfully remarks to Cruise, “Oh, God. Stop… You call me, you start talking… and then I’m in a helicopter… on a mountain. Tom knows I would literally never make a movie again if he did not create the pressure cooker that makes me go, ‘Oh, alright.’”

Cruise is widely considered to be one of the last remaining “movie stars.” While he has become increasingly more private over the last decade, his audio commentaries with McQuarrie on Fallout and Rogue Nation offer a rare opportunity to get to know the actor. Hearing him trade stories with McQuarrie and let his guard down a little bit is something you don’t get during his press tours. Of course, his perspective on his stunt work in Fallout, as well as the particulars of his broken ankle and how it affected the remainder of production, are covered in detail by Cruise and McQuarrie. 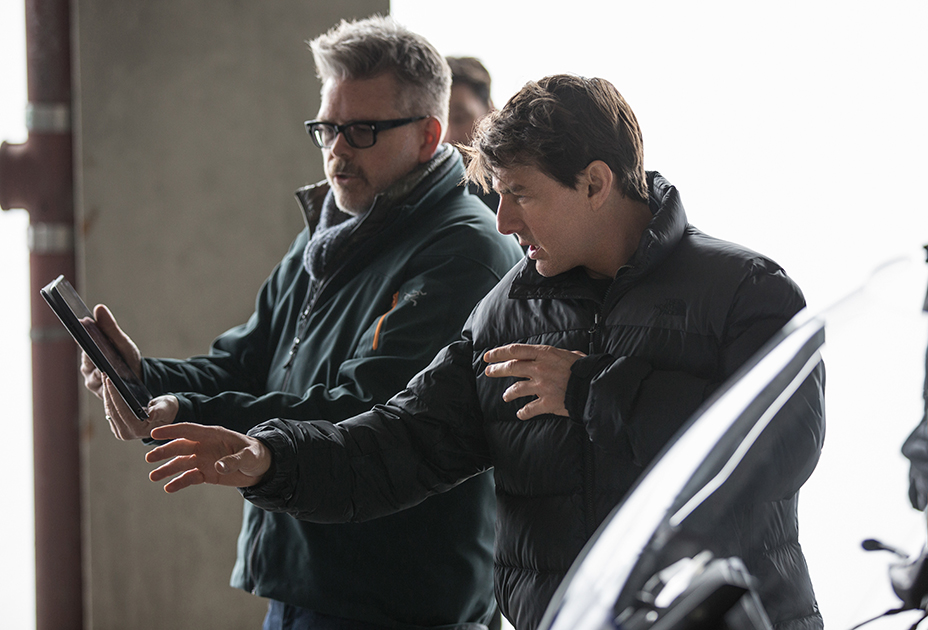 In addition to the McQuarrie and Cruise commentary, “McQ” provides yet another thorough commentary with editor Eddie Hamilton, who had the Herculean task of assembling and editing Fallout, including handling 70 hours of helicopter footage. (The finished film’s helicopter sequence ended up being 7.5 minutes of footage). Fallout’s commentaries, as well as a third commentary with composer Lorne Balfe, go to remarkable lengths to inform the audience as to how blockbuster films are made in today’s marketplace. McQuarrie famously started shooting Fallout with an unfinished, 33-page script so the commentaries discuss how he crafted the story on set, during production hiatus and through rigorous test screenings.

To get an idea of the granular details you’ll learn from these commentaries, below are a few of THR’s favorite tidbits.

1. McQuarrie has made no secret of the fact that Alec Baldwin suggested the heroic fate of IMF secretary Alan Hunley, however it was Tom Cruise who came up with Hunley’s final line of “Go.” Baldwin recorded his famous last word on his iPhone and sent it to McQuarrie for inclusion in the final cut.

2. McQuarrie provided the mission briefing voice at the start of the film. However, before he committed to the role, they experimented with Baldwin’s voice. Ultimately, McQuarrie deemed Baldwin’s voice as “velvety.” Editor Eddie Hamilton also added that it was distracting due to our familiarity with the actor’s voice.

3. The initial exchange between August Walker (Henry Cavill) and Ethan Hunt aboard the C-17 military aircraft had to be reshot because the character of Walker evolved quite a bit throughout production.

4. The celebrated bathroom fight at the Grand Palais features Chinese wushu champion and acclaimed stunt performer Liang Yang as John Lark’s decoy. McQuarrie and Cruise first worked with Yang on the set of Edge of Tomorrow as he doubled for Emily Blunt. (Side note: Cruise twice refers to Edge of Tomorrow as All You Need Is Kill, the film’s original title, in the commentary.) Since 2008, Yang has put together an impressive resume including FN-2199 in Star Wars: The Force Awakens, a Praetorian Guard in Star Wars: The Last Jedi and Oberyn Martell’s (Pedro Pascal) stunt performer during his fateful fight on Game of Thrones. Yang also trained Daisy Ridley and Felicity Jones for their Star Wars stunts.

5. When Ethan Hunt poses as John Lark and meets “The White Widow” (Vanessa Kirby) at a bar inside the Grand Palais, a series of hitmen attempt to kill Ethan/Lark. The hitmen’s affiliation was never clarified until now. McQuarrie reveals that The White Widow’s brother, Zola (Frederick Schmidt), hired these men to protect his sister from Lark given the latter’s underworld reputation. This also explains Zola’s contempt for Lark. They were not associated with The Apostles, despite the popular fan theory.

6. Once the IMF team arrives in London with Solomon Lane (Sean Harris), the elaborate spycraft sequence at Pennington Street Warehouse proves to be a painful endeavor for both Cruise and Baldwin. Despite breaking his ankle six weeks prior, Cruise had just finished shooting the foot-chase sequence the day before, and he states how he couldn’t walk on this particular day of shooting. To add injury to injury, Baldwin was overdue for double hip replacement surgery. Thus, McQuarrie blocked a major portion of the scene around a table that would provide Cruise and Baldwin some support, as well as call for the least amount of movement possible.

7. When Luther (Ving Rhames) opens up to Ilsa (Rebecca Ferguson) about Ethan’s past life with Julia (Michelle Monaghan), McQuarrie was inspired by a similar scene in Sidney Lumet’s The Verdict involving Charlotte Rampling and Jack Warden.

8. The opening and closing scenes of the movie were filmed on the same day in order to accommodate Monaghan’s schedule on Hulu’s The Path. Once production wrapped in the medical tent, the cast and crew flew from Queenstown to Milford Sound, New Zealand, to shoot the opening dream sequence. Originally, Baldwin was supposed to play the minister in Ethan’s dream, however, he was unavailable. Sean Harris/Solomon Lane took his place as the dream sequences throughout the movie represent Ethan’s greatest fears and regrets.

9. Despite not appearing in the Kashmir portion of the film, Kirby was on set in Queenstown since The White Widow’s resolution hadn’t been decided at that point in production (pre-broken ankle). Similar to Cavill’s Walker, Kirby’s character would evolve as the story evolved. While it isn’t mentioned in any of the commentaries, McQuarrie has suggested elsewhere that Ilsa and The White Widow were once slated for a confrontation on an airstrip in Kashmir. After all, the plotline was there for the taking since The White Widow demanded that Ethan/Lark give up Ilsa before the IMF headed to London in pursuit of the remaining plutonium cores.

10. The final shot of the movie ended sooner than McQuarrie wanted as the camera rolled out of film. This shot was not supposed to be the final shot of the movie, however, due to a long run time, the movie felt like it needed to end in the medical tent despite Cruise’s reluctance to conclude a Mission film with Ethan in a hospital bed. If you’re curious, the original (and beautiful) final shot is included in the deleted scenes montage. Since the final shot in the movie rolled out of film, the subsequent flash was incorporated into the closing credits “curtain call.”

'Mission: Impossible' Director on the Dark Plotline Cut From 'Fallout'