Tucked away in an inconspicuous business park in a sleepy section of Santa Monica are the offices of one of the biggest developers in video games, Treyarch.

The studio, founded in 1996, has been producing best-selling games for nearly two decades, and after its acquisition by Activision in 2001 it was given control of one of gaming’s crown jewels: Call of Duty.

Five years after working on its first Call of Duty game, the 2005 Call of Duty 2 expansion Big Red One, Treyarch developed the first entry in an ongoing spinoff series, Black Ops. Upon its release in 2010, the game broke records for the largest entertainment media launch in history — more than any other game or film at the time — selling 5.6 million units in its first 24 hours and grossing over $650 million in its first week. The game has taken in more than $1 billion in revenue, all told.

It held the title of best-selling game ever for three years, until 2013, when Rockstar released Grand Theft Auto V, the current title holder, which has grossing over $6 billion dollars and sold over 90 million units.

That first game’s success spawned a new franchise of its own, and Black Ops games soon became a standard in the first-person shooter genre themselves. Now, close to a decade later, Black Ops 4 is set for release this month and Treyarch is aiming to make an impact in a gaming landscape that has grown and changed drastically in the past few years. 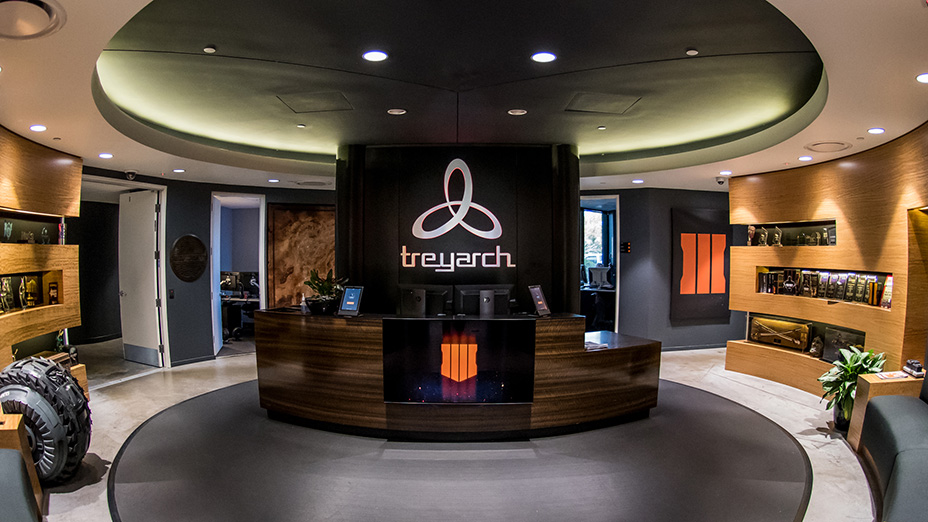 “The studio itself has evolved significantly,” Dan Bunting, co-head of Treyarch, tells The Hollywood Reporter in the studio’s impressive multimedia room, an expansive space fitted with theater seats, wall-to-wall HD televisions and a conference table that looks like it was lifted right out of Dr. Strangelove (no accident, it turns out, as it was designed to resemble the film’s “War Room” for a promotional event tied to the first Black Ops, set during the Cold War).

“I think every game is a process of change and growth,” Bunting continues. “We try to push ourselves a lot. I think the opposite side of the coin of passion is constantly needing to be challenged. We’re always challenging ourselves because it keeps us invigorated in doing what we do.”

One of those challenges is implementing the hottest trend in gaming into one of the industry’s most well-known and historic franchises. As Fortnite continues to drive record revenue and dominate the cultural zeitgeist — the game has been referenced by Saturday Night Live and South Park in the past week, the NHL’s Vancouver Canucks has banned the game among its players, and Jimmy Fallon hosted a Fortnite dance competition with K-pop supergroup BTS recently — the genre of Battle Royale, a multiplayer mode that pits a large group of players against one another until only one remains, has dominated the current gaming conversation. Black Ops 4 features its own version of Battle Royale, titled Blackout, which has already earned rave reviews from previewers.

Working on AAA titles — major releases by marquee video game publishers — is a serious undertaking, and Treyarch’s sprawling studio features two floors filled with artists, engineers and various other creatives working hard to get the game ready to ship as the clock ticks ever closer to release. While much has been publicized about the “crunch” that developers go through in the final days leading up to launch (long hours, sleepless nights, generally crushing workloads, etc.), during THR‘s brief visit to the studio, employees were not only visibly excited to show off their work, but effused a giddy passion.

Shawn Jimmerson, senior sound designer, works in a small corner office down a hallway painted with custom art tracing the Call of Duty franchise history at Treyarch. His room is filled with acoustic foam, mixing boards and bizarre, futuristic instruments used to cultivate the rich soundscape featured in the new game. He eagerly delves into the staggering amount of individual sounds that make the game convincingly immersive, and happily gives up the secret behind one of his most beloved personal creations: the creaking hull of a sinking ship. Drawing a violin bowstring across a metal sheet, he produces the eerie screech of a keeling ocean liner.

Adam Rosas, associate animation director, shares a similar enthusiasm as he explains the process of performance capture used to translate live actors’ movements into the game’s character models. Rosas, who has been with Treyarch since 2004’s Spider-Man 2 game, tied to the Tobey Maguire-led film, was present on set for the performances, working with a number of actors he has built up a rapport with over the past few titles in the series. 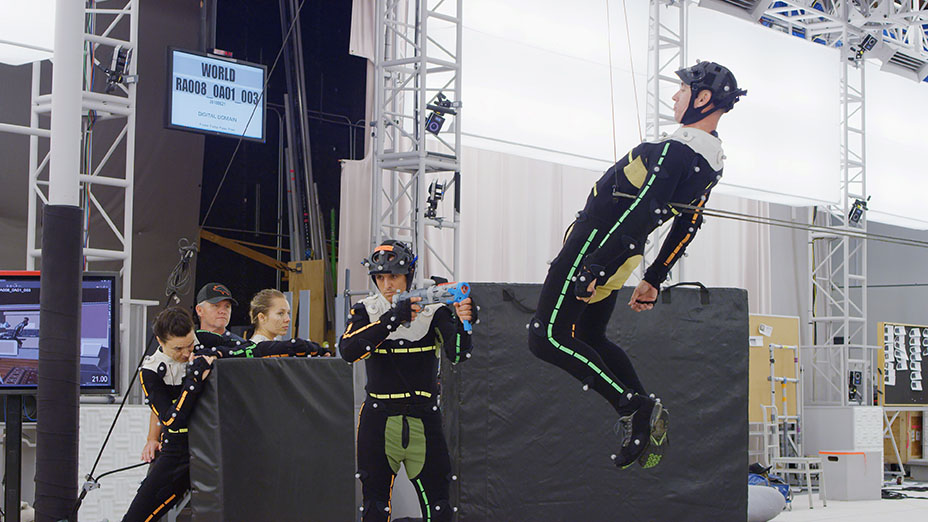 Upstairs, senior artist Mike Curran gives a detailed walkthrough of creating one of the game’s playable “Specialist” characters, Torque, a burly builder covered in pockets, tools and mustache hairs. Curran, working at a standing desk sporting two large monitors and a litany of keyboards and artistic software, shows off the many different looks the character can model in the game, as well as initial designs for his garb (including a kilt!). He also excitedly showcases a few Easter egg models that he worked on that can’t be revealed until players discover them on their own when the game is released.

In a year when single-player, story-driven games are experiencing a major surge (PlayStation 4 exclusives God of War and Marvel’s Spider-Man both had record-breaking openings for the Sony console this year), Black Ops 4 has done away with a core single player narrative, a first for the series.

“There is narrative, but we’re just doing it in a different way,” Bunting explains. “We wanted to make a game that was built around social gameplay experiences. In multiplayer games, a lot of times, narrative and story create tension between systems-driven gameplay and multiplayer. Those worlds butt heads a lot.”

That particular approach to storytelling isn’t entirely new to Treyarch, as the studio has explored similar ground in its Zombies modes — in which players battle hordes of the undead — over the years. Since first appearing in 2008’s Call of Duty: World at War, Zombies mode has grown into one of the most popular brands under the CoD banner, with a mythos influenced by the community itself and an in-game universe rife with Easter eggs, wild plot machinations and an ever-growing roster of characters, all crafted without a traditional narrative single-player campaign. This year marks the spinoff’s 10th anniversary. 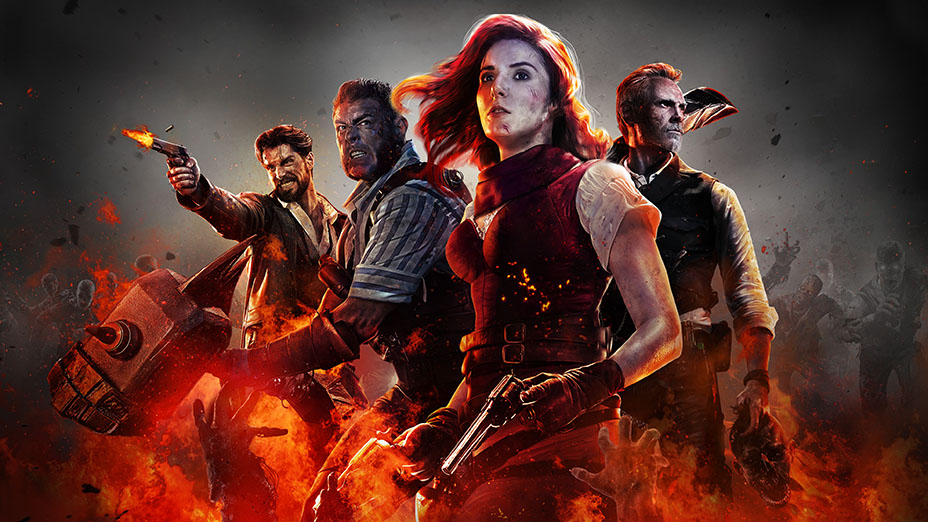 Jason Blundell, director of zombies at Treyarch, runs his team from an office adorned with posters that are a testament to past entries in the horror-inspired offshoot series (elsewhere in the building, an entire hall is decked out in severed limbs and blood-smeared walls in homage to the undead game mode).

“When you’re making a Black Ops game or Call of Duty game, you have your narrative and you have to honor that and stay in those boundaries,” Blundell, who first got involved in the Zombies spinoff by created the Der Reise map in World at War, says. “That’s completely opposite than in Zombies mode. In Zombies mode, we’ll sit down and have a storyboard and we can go wherever we need to go and turn things on their heads. That’s completely liberating from a narrative point of view, from a game designer point of view, because there are no hard rules in that sense.”

Bunting calls Blundell’s mode “at its core, a social gameplay experience” and drew inspiration from it for the main experience of Black Ops 4. “It’s heavy if you want to get into it, but you don’t have to. It’s sort of there for the taking, and that was a great lesson for us on how to tell stories differently, which I think you’re going to see in a lot of ways,” he says.

The Zombies mode in Black Ops 4 is the largest day one offering in the franchise’s history, featuring three separate maps: IX, a gladiator arena in ancient times; Voyage of Despair, set aboard the RMS Titanic; and Blood of the Dead, which takes place on the prison island of Alcatraz. The latter focuses on the ongoing Aether storyline familiar to Zombies fans, while the other two introduce the new Chaos plot and new characters.

“Based on which story you’re in, the mechanics change,” Blundell says, before adding with a laugh, “The stories are completely separate, regardless of what the community says.” He does offer one cryptic hint for fans, however: “Secrets are in the posts.”

The goal for Bunting and team is to construct a game that creates opportunities for sandbox gameplay where players can craft their own memorable moments. “There’s just something really magic about the stories we let our fans create for themselves,” he explains.

“I wouldn’t say we’re trying to consciously push the industry in this direction, but we’re definitely trying to push ourselves that way,” Bunting says. “We hope that it creates new trends and inspires others, but ultimately it’s about us just trying to delve into new territory.”

Of course, the experiences players create on their own is dependent on the work that Bunting, Blundell and their teams put into making the game itself, and Treyarch is certainly a company where the adage “it takes a village” applies. As games’ shelf lives continue to stretch longer and longer, that sense of community is important, as in many ways the launch of a new title is just the beginning, particularly for a game that is centered solely on multiplayer experiences.

“Game launch is the halftime of the Super Bowl,” Bunting says. “It’s this big spectacle, but then you’ve got the second half ahead of you, which is arguably the more important half.”

Black Ops 4 will be available Oct. 12 for the PlayStation 4, Xbox One and PC.