Tucked away in the Palisades, just off Pacific Coast Highway, is Lake Shrine, a 10-acre self-realization retreat with a hilltop temple, a lush meditation garden and a spring-fed pond, all blocked from the wind and city bustle by a wall of trees and greenery. Here, on this overcast February morning, sitting at the water’s edge as hummingbirds and butterflies flitter nearby, is Winston Duke, the hulking 6-foot-5, 230-pound actor who played M’Baku in Black Panther and who now stars in horror auteur Jordan Peele’s Get Out follow-up, Us, which premiered March 8 at the South by Southwest Film Festival and opens March 22. (“Fiercely scary,” declared The Hollywood Reporter.)

“When I’m in Los Angeles, it feels like things never stop moving,” says Duke, 32, who often comes to the spot to meditate. “So I seek places of stillness, where the only thing moving is nature.”

Things have been moving, all right. One minute he was doing bit parts on Law & Order: SVU and playing a drug dealer on Person of Interest. The next, he’s inking a multipicture deal with Marvel (his second appearance as M’Baku was in April 2018’s Avengers: Infinity War, his third will be in this April’s Avengers: Endgame, and his fourth likely will be in the Black Panther sequel that Ryan Coogler is writing) and headlining opposite Lupita Nyong’o in Peele’s hotly anticipated second act. Plus, he just wrapped work on the Netflix crime drama Wonderland, helmed by Peter Berg and starring Mark Wahlberg; signed on to Heroine, an action thriller from Paramount’s indie unit, Paramount Players; and is attached to play MMA fighting legend Kimbo Slice in an upcoming biopic.

“The intention was always to be successful. But it has not been a straight path,” Duke says, his eyes slowly following a pair of swans paddling across the still-as-glass water. “A lot of times, I didn’t know anything was going to happen.”

Duke was born in the island nation of Trinidad and Tobago. But when he was 9, his single mom moved the family to Brooklyn so that his older sister could pursue medical school (she’s now an endocrinologist in Las Vegas). It was a tough adjustment. “I was very reclusive because I didn’t really understand American culture,” Duke says. He spent a lot of time at home alone while his mom worked and his sister was at school — he started watching TV and movies and reading comic books, and his new culture gradually became second nature. “Story kind of became my outlet,” he says. “I loved reenacting things I saw on TV.”

A teacher noticed Duke’s flair for performing in front of the class and encouraged him to sign up for his high school’s drama program, and that’s when he got hooked. Later, at New York’s University of Buffalo, he tried a few other majors, like prelaw (“I enjoyed the idea of the performing side of law”), anthropology (“I loved the study of culture”) and archeology (“huge history buff”). While he enjoyed acting, he had no reference point to believe that a guy from a small Caribbean island could go on to make a living in Hollywood. “That’s a crazy idea,” he says. “That example wasn’t set by anyone else that we knew — there were no actors. Being a person that you see on TV, being a person that you see in the movies, no one had seen that.”

In the end, though, he couldn’t shake the urge to perform.”So I switched my major to theater, and everything changed,” he says. After college, he thought about taking the LSATs, even studied for them, but instead applied to a dozen drama graduate schools. He ended up getting accepted by the best. And it was there, at Yale, that he met a fellow student named … Lupita Nyong’o, who’d been assigned to show him around campus. 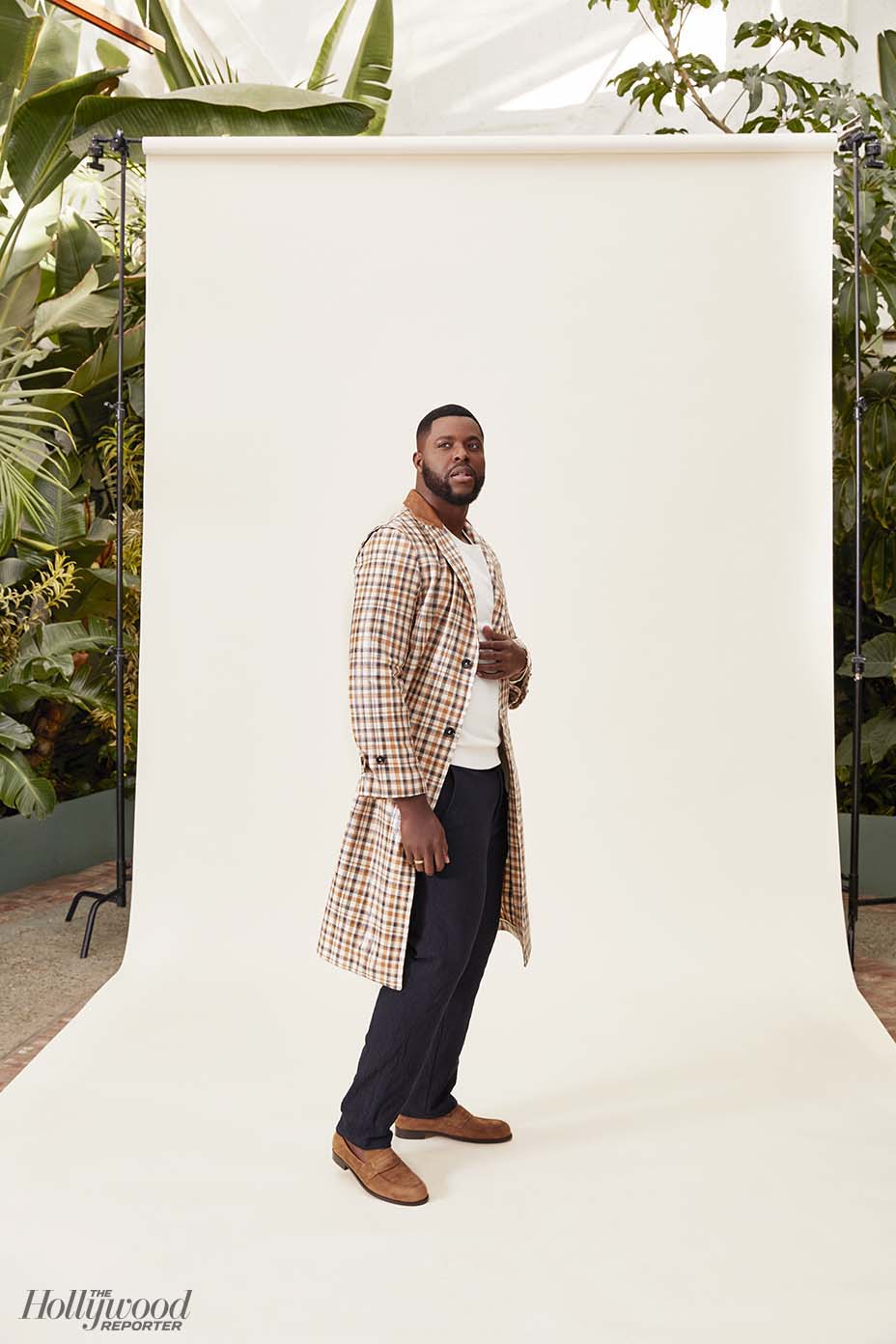 “He was extremely tall, and he has quite the presence — but he was also very internal and pensive,” recalls his classmate (and Black Panther co-star). “He was on edge because he was auditioning to get into the school, but he also had a very clear idea of who he wanted to be in the world.”

Duke estimates he went on about 400 auditions in the first year after graduating from Yale in 2013. Eventually, he started landing parts in (way) off-Broadway shows (like an August Wilson play in Portland, Maine). To eat, he took part-time jobs, like waiting tables and working as a holiday-season gift wrapper. Even after he started landing small TV gigs — he played a football player who gets assaulted during a college recruitment trip in a 2014 episode of SVU and a football player during a 2016 three-episode arc on Modern Family — he was barely surviving. There were many nights of “sitting on the floor alone thinking, ‘What am I doing?’” he says. “If I committed this much attention and intention to anything else, I’m pretty sure I’d be successful at it. “ 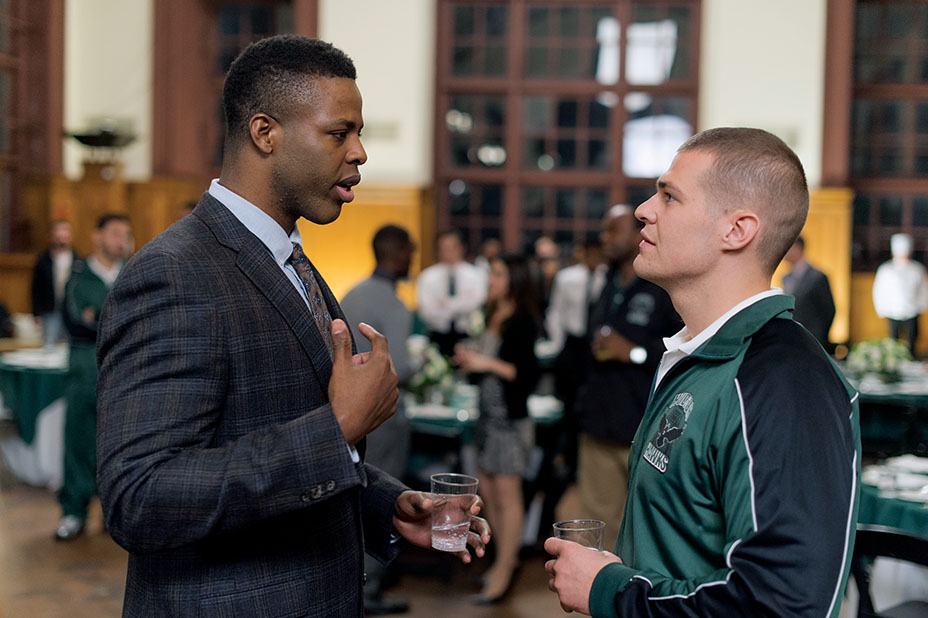 Then, in 2016, his agent sent him on yet another audition, this one for an untitled Marvel project. The movie was veiled in the usual Marvel secrecy, with NDAs and fake sides, and Duke didn’t find out until his third callback that he’d been trying out for M’Baku, the pelt-wearing warrior who battles T’Challa for the throne in Black Panther. “Winston has such a big personality and physicality that he leapt off the screen in the taped auditions. Initially, we thought the character was going to be played deadly serious,” says Panther producer Nate Moore. “But after watching Winston’s read, we saw that there was a pompousness to his portrayal that made M’Baku a little more fun and a little more sympathetic than imagined.” 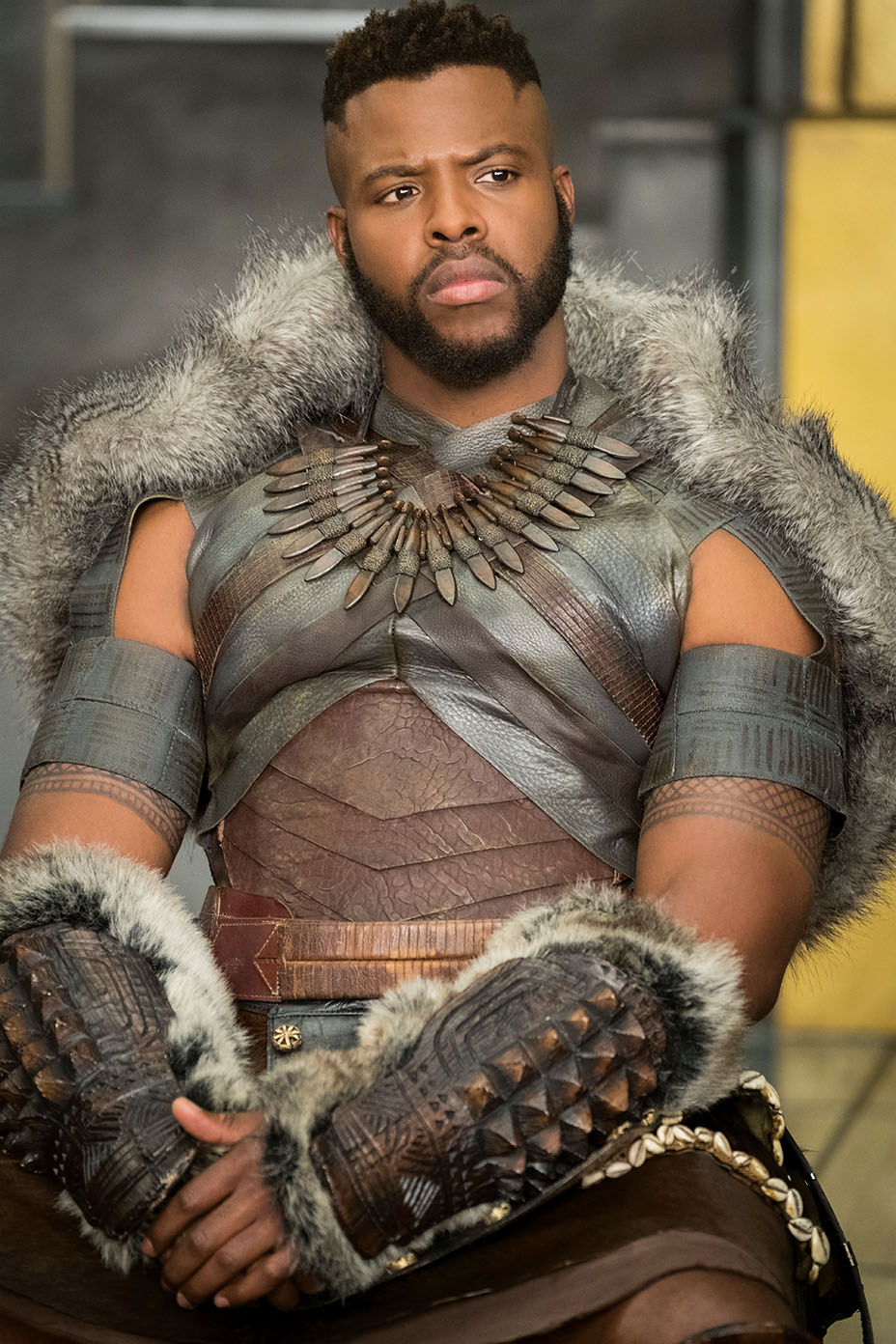 The movie came out Feb. 16, 2018, and over the next couple of days, as his performance garnered more and more attention (particularly his scene-stealing “We are vegetarians” line), Duke saw his fame explode. The sudden attention came as a shock. He lives a relatively discreet life, residing in the North Hollywood house that he bought after Panther‘s success (his mother lives with him half the year, spending the other half with his sister in Las Vegas), and when asked about his relationship status, he just shrugs off the question. But in a matter of days he saw his profile heightened dramatically. His Instagram account spiked from 9,000 followers pre-Panther to 25,000 a day after its release. A few days later, it was 200,000. A few more, 620,000. His text messages blew up, as well: The morning after the film’s release, he woke up to find he had 1,000. “I was getting congratulations from people I hadn’t seen since 10th grade,” he says.

Some of those messages were from agents, but the offers that started rolling in were not exactly what Duke had in mind as he strategized the next phase of his career (now that he had a career). “I was in conversation for a lot of [roles in which] the character was a fighter, a big guy — he’s aggressive, a warrior,” he says. But Duke was holding out for a part that would allow him to transcend his linebacker-like physique and show off other aspects of his range. “I loved playing M’Baku, but that’s not who I am. I want to convey the full spectrum of masculinity. I want people to say that this guy helped change the definition of masculinity onscreen 40 years from now. I’m trying to be that person.”

A few weeks after Black Panther‘s release, Duke attended the Oscars with Nyong’o and Panther co-star Danai Gurira. At an afterparty, he spotted Jordan Peele and walked over to congratulate him on his Oscar win for Get Out‘s screenplay. “I’m not afraid to go up to people and just say, ‘Hi, I’m new, and I’m a big fan,’ ” Duke says. “You can only be ‘new’ once, so I took full advantage of that.”

Peele, as it happened, was looking for the male lead in his next movie, someone to star opposite Nyong’o as her husband, Gabe, in a horror story about a couple who take their two kids on vacation to a beachside town and are stalked by four freaky strangers who look exactly like them. But Peele was concerned that someone of Duke’s formidable size would make the family’s peril seem less believable. “It would take away from our ability to feel afraid [for the family] if they have M’Baku on their side,” he explains. On the other hand, Peele goes on, “Winston had this charisma that just stole scenes and really left an impression.” Peele asked Nyong’o what she thought of her former classmate, texting her a photo he’d found of her and Duke at the SAG Awards. “I said, ‘hell yeah,’ ” she remembers. 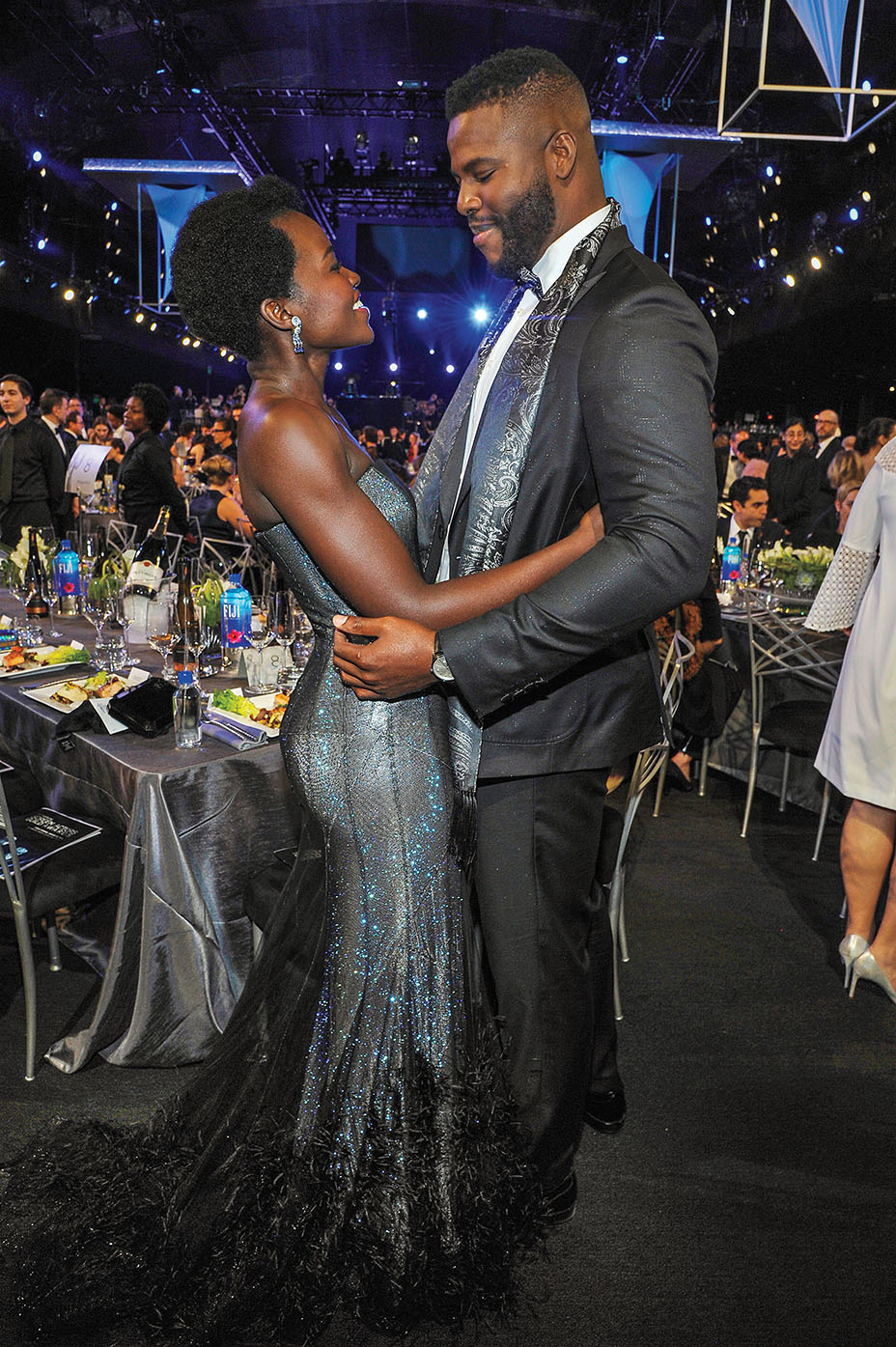 Duke threw every bit of his Yale training at the part, prepping for weeks. He studied horror classics — The Shining, The Birds, The Sixth Sense — and even hired a dramaturge (a literary adviser who helps interpret scripts) to comb through the symbolism in the screenplay. To Duke, Gabe wasn’t just a character but an opportunity to put on the screen exactly the sort of fully fleshed-out black male character he wished he’d seen in movies when he was growing up. “I saw him as funny. I saw him having a rich sexual life — which you don’t get to see that often. I wanted him to be thick, sexy, funny, playful, serious, deadly — I wanted him to be everything.”

The 45-day shoot began in July 2018 in Los Angeles and Santa Cruz. Although Peele didn’t know it at the time, one of Duke’s main inspiration for the performance was Peele himself. “[The character] has Jordan Peele-like intellect, humor and nonchalance,” says Duke, who stole some of Peele’s mannerisms for his portrayal. The director, though, doesn’t see it. “The character has glasses and a beard,” Peele concedes, “But I think the character’s much more like him than it is me. He’s a guy — I’m talking about both Winston and Gabe — with a ton of heart, a ton of enthusiasm. I would call Winston and Gabe both the heart and soul of Us.” 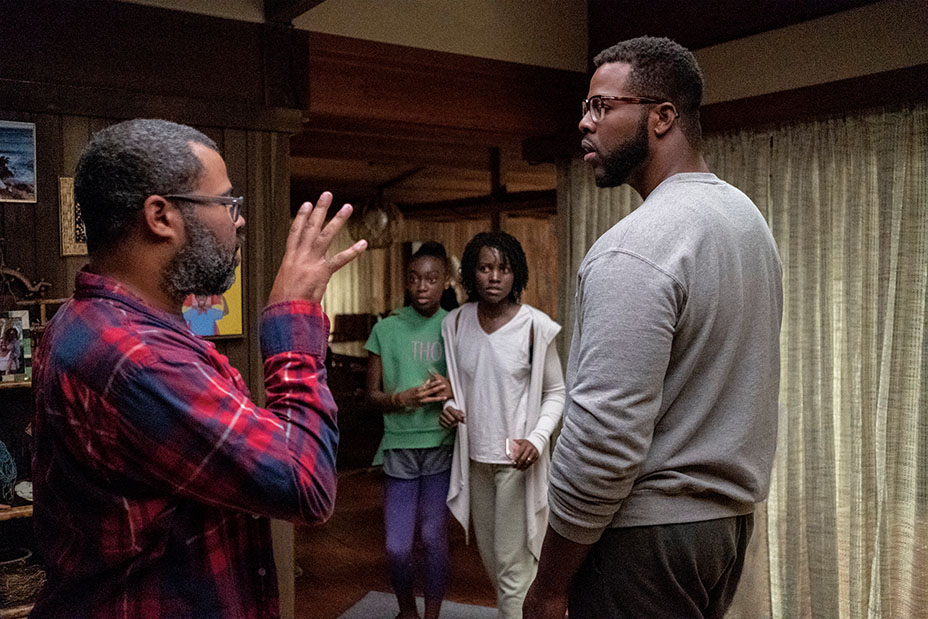 What made the role twice as demanding — and interesting — for both Duke and Nyong’o was that they had to play not only the main characters but also the creepy doppelgangers who are out to kill them. “I never viewed [the double] as a villain,” Duke says, waxing philosophic as he watches a hummingbird hovering nearby. “I just think they have different motives. As much as I enjoyed playing Gabe, Gabe was in the position of privilege. And I viewed those [doppelganger] versions as not having any agency in their lives. They’re not shadows, they’re just the people who bear the cost of your actions.”

Just as he’s about to finish his thought, the floating hummingbird pivots and darts through the air, zooming straight for the spot on Duke’s head right between his eyes. Duke barely ducks in time to get out of its way. “You’ve got to watch out for those things,” he says, his stillness once again disturbed. 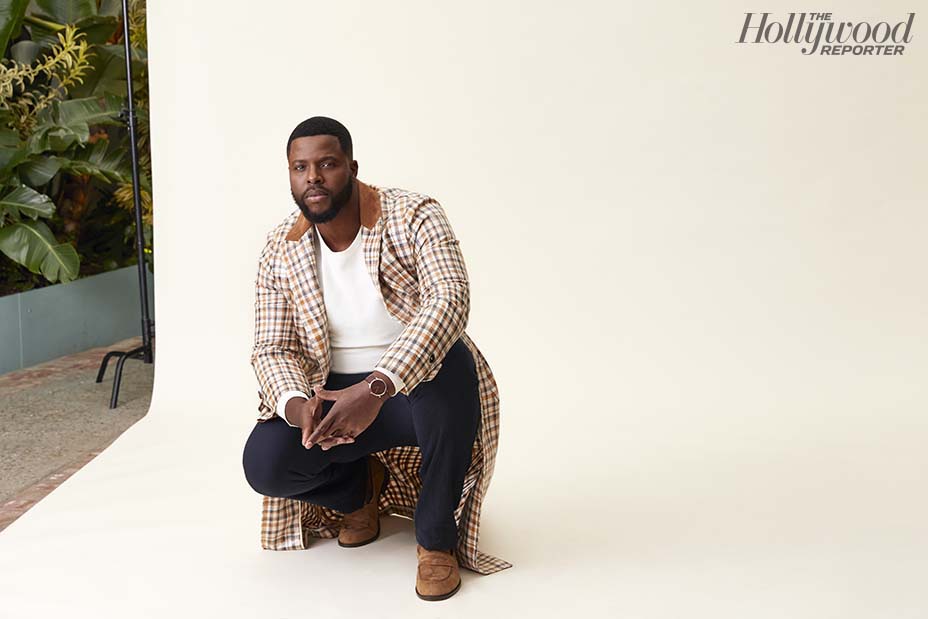 A version of this story first appeared in the March 13 issue of The Hollywood Reporter magazine. To receive the magazine, click here to subscribe.