There wouldn’t be a John Wick without Jason Bourne. Or Paul Greengrass.

Fifteen years ago Tuesday, The Bourne Supremacy director unleashed (for better or worse) his signature gritty, shaky-cam approach to the successful sequel’s action scenes, which would become an aesthetic that so many action movies would cover (or outright rip-off) that it would redefine the genre for nearly two decades.

What started as a means for Greengrass — picking up from Bourne Identity director Doug Liman — to apply his documentarian style in an effort to ground Matt Damon’s amnesiac super assassin’s fights and car chases with a sense of realism, it would extend far past that and become a visual vocabulary unto itself — one spoken by everyone from Bond (2008’s Quantum of Solace) to every John Wick movie. Since Supremacy’s release in 2004, the use of this visceral verisimilitude has proven hit and miss, with some lesser entries in the genre eventually approaching or achieving self-parody (including Greengrass’ own Jason Bourne in 2016). But what those movies get wrong that Supremacy doesn’t is how the sequel never loses sight of why we’re watching the movie at all: the characters.

The character-first set pieces are fueled by emotionally-driven stakes. From the jump, Greengrass — working from script by Tony Gilroy and an uncredited Brian Helgeland — is less concerned with exotic tradecraft and more about Bourne’s struggle with finding who he is at the cost of getting violently closer to the truth about the killer he was. The audience only knows what Bourne does, when he knows it, for most of the film’s first act; here, everything unfolds at human height.

This intimate epic approach allows audiences to re-enter Bourne’s life after our initial and exciting exposure to it in Bourne Identity, but in a new, more personal, more painful way. This is best dramatized when Bourne, playing fugitive from his nefarious CIA handlers at Treadstone, witnesses the assassination of the only person he can trust, the closest thing he has to love, Marie (Franka Potente). We’re in the cab of their Land Rover when the bullet pierces the window and Marie’s skull; and it’s salt on the wound when their vehicle plummets into a dirty river below and our last moments with Marie are spent watching Bourne watch her lifeless eyes before her body drifts away — and, along with it, any sense of a life free from more killing Bourne may have. 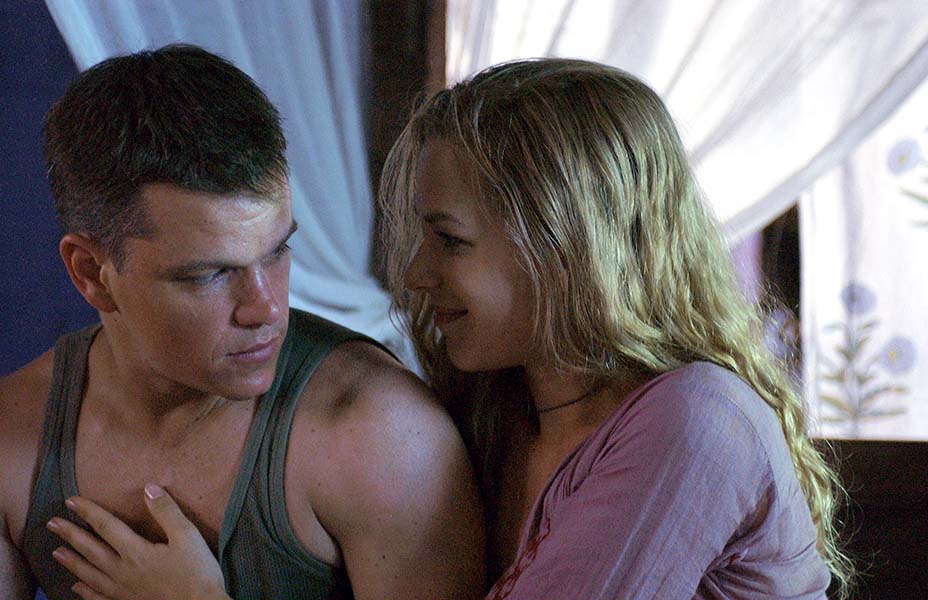 And that’s all before the 30-minute mark. In a movie full of trailer-friendly moments as the hero finds inventive ways to assault a baddie with a rolled-up magazine, it’s impressive the filmmakers got away with such a violent and emotionally traumatizing beat in a summer blockbuster. The emotional toll of Bourne watching a bullet meant for him take out an innocent person bleeds into every subsequent scene as Supremacy positions our assassin as some sort of lost samurai almost, a ronin looking to make a kind of peace with himself by confronting another innocent life hurt by a bullet fired long ago, this time by Bourne himself. Supremacy’s plot hinges on Bourne discovering the truth behind those nightmarish flashes that wake him up gasping in the middle of the night. But the film’s story, its emotional throughline, what it’s really all about, is Bourne making amends with himself before the daughter of the parents he killed.

He’s not seeking forgiveness; Greengrass and his collaborators are too polished and smart to go for something so trite. No, he’s there to confess his guilt to the one person more haunted by it than he. To get it off his chest and acknowledge that as hard as he’s trying to be a “good” person, he’s a bad man. A liar. A killer. In the service of liars and killers. The toll of his choice to confront a past that makes it hard for him to have much of a future is nothing short of exceptional emotional storytelling. When Bourne confronts the daughter inside bare-bones government housing in Russia, it’s all in service of what he thinks is best for his victims’ surviving child. To give her some sense of closure after believing for years her parents died in a way that tarnished their memory. The look on the young woman’s face once Bourne leaves, after telling her the truth, leaves both him and the audience thinking that perhaps the lie was more preferable. That maybe as painful as a guilty conscience is, nothing hurts more than knowing what causes that pain to begin with.

Bourne Supremacy explores such weighty notions in between all the kick-punching and jerky camera moves. The end result is a kinetic action movie hiding out in a drama that firmly resonates in ways its imitators rarely do or even try to pull off. As tired the copiers of Greengrass’ style may be at times, there’s no substitute — emotionally or visually — for the original.