Director Travis Knight is still buzzing about his time on Bumblebee.

With more than 20 years of experience as an animator and over a decade of know-how as an animated filmmaker, Knight was pleasantly surprised by the overlap between stop-motion animation — the bread and butter of his company, Laika — and his first voyage into live action via December’s Bumblebee. Of course, Knight still felt overwhelmed and “blanched” at times, since the biggest difference between the two mediums is pace, but he knowingly never lost sight of his North Star: story and character.

“It took me five years to make Kubo and the Two Strings. Stop-motion is filmmaking at the pace of a glacier. In live action, you’re moving so quickly,” Knight tells The Hollywood Reporter. “We get through more pages of material in a day than we would in a typical week working in stop-motion.”

Since Bumblebee earned $466.9 million at the box office, as well as the Transformers franchise’s best reviews by a wide margin, many fans are wondering if Knight will return to helm a sequel, since producer Lorenzo di Bonaventura recently stated that a Bumblebee sequel is in development.

With Bumblebee now available on digital and Blu-ray, Knight spoke with THR about his admiration for his lead actor, Hailee Steinfeld, as well as the possibility of branching out from the family-adventure storytelling he’s become known for in the last decade.

With your first live-action movie in the books, what parts of the process proved to be more, or less, challenging than you originally expected?

The main thing that’s different, fundamentally, is the pace. It took me five years to make Kubo and the Two Strings. Stop-motion is filmmaking at the pace of a glacier. In live action, you’re moving so quickly, and there’s a great thing that comes with that. There’s a lot of energy; there’s fertile ground for innovation, creativity and new ideas. Things are always moving; you have to be nimble. It’s really exciting. Your brain is always firing; the synapses are going all over the place. You’re trying to figure out how you can shape it and craft it at this crazy, breakneck speed. We get through more pages of material in a day than we would in a typical week working in stop-motion. It’s much quicker and much, much faster. The bookends of the process are identical: how you develop it; how you script it; the post process. It’s very similar. The visual effects process is essentially working in animation. The shoot itself presented some unique challenges, but it was a ton of fun. I loved every minute of it. 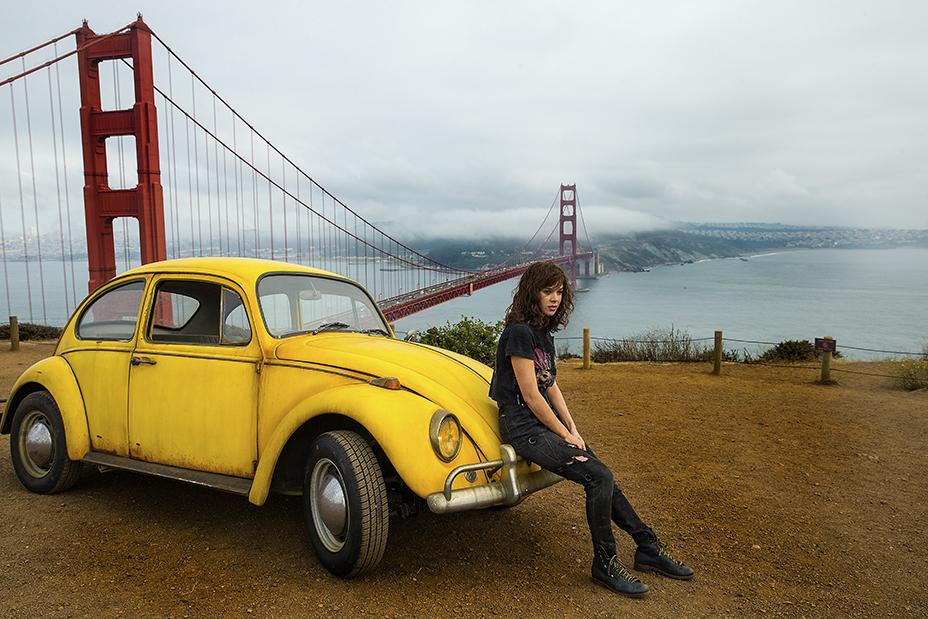 I asked Hailee Steinfeld about this, but I wanted to get your perspective as well. In the Bumblebee-Charlie scenes, Hailee obviously had to act without a real-life scene partner. Scene partners typically help each other keep the tone in check. How did you prevent overacting while gauging the right tone?

Well, there’s the old saying that directing is 90 percent casting, and I was incredibly blessed to have Hailee Steinfeld as my leading lady. She is one for the ages. She is incredibly talented; she’s so good. From the outset, I knew that she was my Charlie. At the very first meeting, I said to Paramount that Hailee Steinfeld has to be Charlie just because she’s so damn good. I knew it was going to be a challenge for any actor, so you had to get a great one. Most of those scenes, she’s acting against vapor. Either there’s nothing there or there’s a stuffy, a tennis ball or some kind of a foam, plastic bust thingy. So, for her to give that kind of a performance with that kind of depth and nuance, it really is extraordinary. I worked those scenes very much the way I would in stop-motion, where they were storyboarded within an inch of their lives. So the cast and crew always knew exactly what was going on in the scene, what the intent was and what the performance of the robot was going to be. In a lot of ways, I based that on me, and I would act things out. I would say, “Okay, this is what he’s doing in this moment; this is how he’s feeling; this is what he’s going through.” So we were able to talk through all that stuff. Hailee and I essentially had to hold hands, jump off a cliff together and learn how to trust each other in this process. We had an extraordinary working relationship, and I think you see that on the screen. It wouldn’t have mattered if she couldn’t pull it off, and she’s just absolutely exceptional. To be able to give that kind of performance when there’s nothing there, it’s amazing. It takes my breath away.

Compared to the previous films, your Transformers looked more tangible than ever, especially Bumblebee. Is improved technology responsible for this look? Or is it a by-product of the less-is-more G1 designs?

I think it’s the function of a number of things. The technology is always improving, although, that said, we had a significantly lower budget than the previous Transformers films. So, while the technology improves, you have to be able to do more with less. I think a big part of it, obviously, is the animation team at ILM. They’re the best in the business. They’re so good. A lot of these teams have worked on the previous Transformers films, but what I told them was that we need to harness all of that experience in a different direction. It’s not gonna be a lot of bombast; it’s going to be acting. It’s not just spectacle and pretty pictures; it’s about making this character feel grounded, real and emotional. That was a different kind of approach than they’ve taken in the past. It meant that Bumblebee had to feel real. They understood that if Hailee is in the scene, giving this extraordinary performance, and then you have this thing that feels false and inauthentic, the scene would fall apart; it wouldn’t work. So they understood that the bar was very, very high. I think part of it is my approach working in stop-motion, where you’re working in practical visual effects, as opposed to just digital visual effects. That meant that what I was focused on, what was a priority for me, was about those kinds of things. ILM pulled it off; they did a beautiful job. I think when people see Bumblebee as real, and they react emotionally to what he’s going through when he’s communicating his feelings just through body language and facial expressions. To me, that’s movie magic right there.

There is clarity to Bumblebee’s action scenes that’s been missing from this franchise for quite a while. What were the key factors in achieving such clarity?

It’s about choreography; it’s about composition. It’s about the way you’re moving the camera; your cutting patterns. It’s all those things combined. Coming from the world of animation, every single line counts; every single gesture counts. You put thought into every single one of those things and the way a frame is composed. It’s painstakingly put together, and so I brought that same kind of perspective to this film as well. I wanted to make sure that the action, when it came, was gonna be high-octane, but you’d also be able to follow it and know exactly where to look at any moment. A lot of times, when I was working with my animators, those are the kinds of things that I would say: “I want the audience looking at this thing. This is the most important thing in the shot. This is the most important thing in the frame, so let’s make sure that we compose it, light it and texture it so that the audience goes right to this thing, because this is the thing that matters.” So it comes down to planning, the way you shoot it and then, ultimately, the way you incorporate all the visual effects as well. It’s a lot of different things. I love action movies as much as anybody, but I also want to know what I’m looking at.

You clearly have a knack for family and adventure storytelling, be it stop-motion or now live action, but out of curiosity, are you champing at the bit to make your Heat or your Goodfellas someday?

(Laughs) Well, I will say that when I started out with my company, I wanted to tell different kinds of stories in different genres. I wanted to essentially play around with every single genre I could before I shuffle off this mortal coil. So there’s virtually no genre of film that doesn’t excite me in some way and that I wouldn’t love to have an opportunity to play around with and put through my prism. I would love the opportunity to play around in the sandboxes that I have in the past, but I’m excited, moving forward, that some of the things I’m developing and some of the things I’m thinking of are entirely different kinds of things for me, things I’ve never done before. It’s terrifying and it’s exciting. Generally, what I find is most artists get excited by stretching themselves, growing and taking on new challenges. That’s certainly true for me. I loved this experience, and part of it was that it was such a new thing; it was such a challenge. To have gotten through it and to have audiences respond so positively to it is really encouraging. Looking forward, I want to continue to challenge myself as a filmmaker. 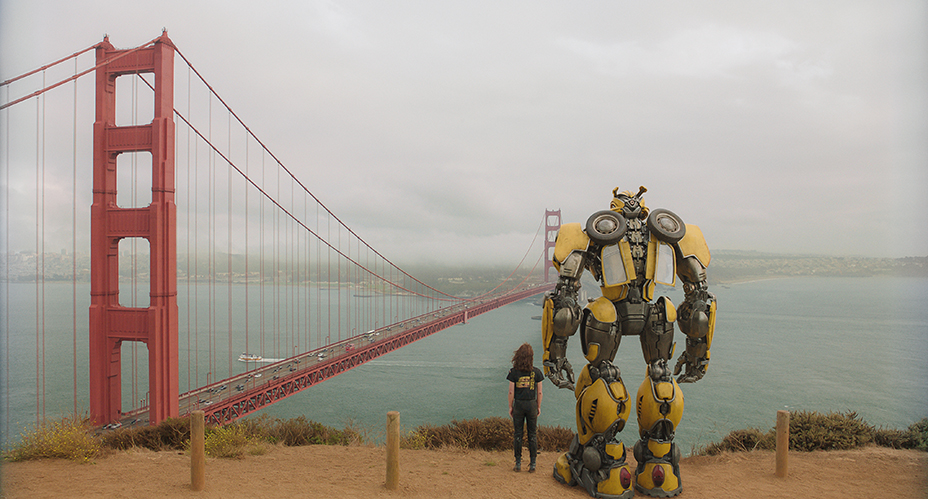 If the stars align, are you open to returning to Bumblebee’s universe to continue what you started? Or does a sequel not present a new-enough challenge, like you just mentioned?

I viewed the film as a self-contained thing. Every film that I’ve ever done, I’ve viewed it as, “This is a statement about this. These are these characters. This is our point of view and on this story.” Once it’s done, it’s done. So I tend to not think about sequels or where the story goes beyond that in terms of actually producing something. However, every single thing I’ve done, these characters, they reside in your mind and imagination. You live and breathe them for so long. You always imagine their lives and their stories outside of the confines of the pictures. What happened in their life before? What happens in their life after? You actually create these stories even though they never make it into the movie. So in my mind, I have all kinds of ideas for where Charlie goes from here; where Bumblebee goes from here; where Optimus Prime goes from here. In my mind I’ve already made those movies on some level. Like you say, if the stars align, would I tell another story in this universe? I mean, I love these characters, so it’d be a thrill to be able to tell a different kind of story in this universe. Time will tell.

Bumblebee is now available on digital and Blu-ray.

How Hailee Steinfeld Humanized the 'Transformers' Franchise With 'Bumblebee'