With director Travis Knight now at the helm, the solo outing of one of the franchise’s most popular characters shifts the action back a few decades to the mid-1980s. After Bumblebee arrives on Earth on a mission from Optimus Prime, he encounters Charlie (Hailee Steinfeld), who helps him evade the dangers posed by Decepticons sent after him and the U.S. military unit, headed by Agent Burns (John Cena), that they’ve tricked into viewing Bumblebee as a threat.

To sell the movie, Paramount has focused not only on the story of the bond between Charlie and Bumblebee but also on how, unlike the previous efforts, this one features the classic ’80s looks of the Robots in Disguise. Here’s how the campaign was rolled out.

Charlie and Bumblebee are seen looking out at the sunset on the teaser poster, indicating that the studio will be touting this as a relationship story as much as, if not more than, a large-scale action movie.

A poster released at San Diego Comic-Con showed Bumblebee both in robot and VW mode. Another that came out a bit later showed Bee kneeling down by Charlie, giving off a distinct Iron Giant vibe many people picked up on.

The theatrical one-sheet has all three main characters — Bee, Charlie and Agent Burns — looking out into the middle distance, a shot of Charlie and Bumblebee in car form standing on a ledge overlooking the Golden Gate Bridge in the background.

That bridge, which helps establish the story’s physical setting, is also seen on the Dolby-specific poster. In addition to photos of Charlie and Bumblebee we see Agent Burns again, this time standing alongside his Decepticon conspirators, offering a better sense of the conflict that will drive part of the action. The Imax poster ditches the rest of the cast to just show our robot, not in disguise at the moment, standing heroically in the same Bay Area location.

Charlie uncovers a yellow VW Bug in a junkyard as the first trailer (24 million views on YouTube) opens, a scene set against audio of someone explaining how the car picks the driver, not the other way around. She takes the car home and starts fixing it up when things start getting strange, ending with it turning into a giant freakin’ robot. The two form a friendship, and we see shots of them enjoying drives and so on as well as avoiding unfriendly fire and escaping from the military.

The second trailer (11.9 million views) hits many of the same beats, but expands on some of the points regarding what the Transformers are doing on Earth in the 1980s and how they’ve presented themselves to select humans. It looks like Decepticons are misrepresenting themselves to members of the military, positioning Bumblebee as an escaped criminal. But Charlie believes in him. 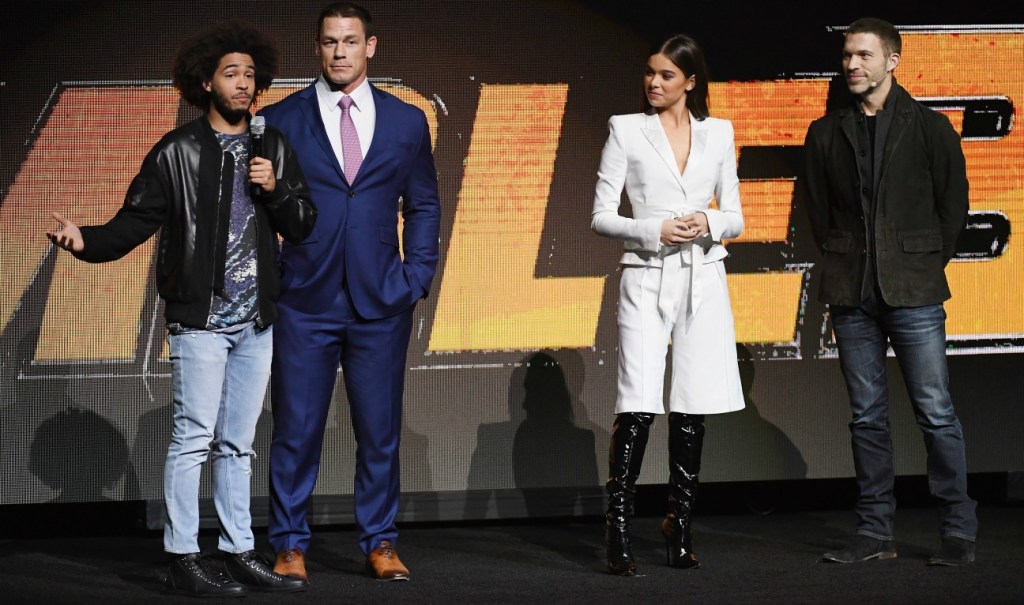 In April, Steinfeld helped Paramount show off footage from the movie at CinemaCon and talked about what a spectacle it was going to be, selling exhibitors on it being a sure-fire hit. The pic was also part of the later CineEurope presentation from the studio.

Since this was the first Transformers adventure not directed by Michael Bay, Paramount released a brief introduction to Travis Knight in June that played up his experience on movies like Coraline and other stop-motion animation projects, an attempt to lure in fans of those films and show a different approach was being taken here.

Early in July, just a few weeks out from the convention, Paramount announced it would be bringing a panel on the movie to San Diego Comic-Con, making it the first in the Transformers franchise to show up there. At that panel, the crowd got a first look at new footage showing Bumblebee fighting a Decepticon as well as news that, yes, Optimus Prime would be making an appearance and, yes, he would be showing up in his more classic ’80s look.

At the convention, Hasbro offered an exclusive Bumblebee toy featuring his new look, one of several movie-related toys the company showed off in San Diego.

A bit later, Fathom Events held a one-night screening in September of Transformers: The Movie — the original ’80s classic — that included a special look at the new film as well.

Because Steinfeld is a singer as well as actress, it was a natural that she offered an original song for the movie’s soundtrack, with “Back to Life” being released in early November to help bring in fans.

A 30-second video was used on a promoted tweet published in mid-November. A bit after that, online ads started running using the key art of Steinfeld and Bumblebee, sometimes with Cena added, as people were encouraged to click through to buy advance tickets. TV spots started airing in early December and taking different approaches to selling the movie, with some focusing on the Charlie/Bumblebee dynamic and some selling a more straightforward action movie. Outdoor billboards used the same artwork.

Early screenings prior to the pic’s release date were announced in late November, with those who bought tickets for those showings gaining access to exclusive bonus content and getting a movie-themed Transformers toy. A couple of the stars also showed up at some of those screenings to get fans excited.

A featurette from late November had the cast and crew talking about how not only did the story jump back in time, but also how they decided to embrace the Gen 1 look of Bumblebee and the other characters to make an even more overt play to nostalgia in the audience. Another in early December introduced us to the Triple Changers, a new kind of Decepticon making their debut in the movie. They were also the focus of the first clip released at the same time, which showed them turning the humans against Bumblebee.

Shortly after that, two featurettes were released allowing Cena and Steinfeld to talk about their characters and how they fit into the story. One more 55-second commercial was recently released, which included some of the praise from early reviews while also showing off the mix of humor and heart in the story those critics have called out.

? Entenmann‘s, which offered $5 in movie cash to use toward a ticket with the purchase of select pastries. The company also added downloadable coloring pages on its website.

? Pop Secret, which partnered with Fandango to give those buying select products an $8 voucher to spend at the online ticketer.

? McDonald’s, which offered movie toys in its Happy Meals and promoted their availability with TV spots and other ads.

? Pep Boys, which ran a sweepstakes offering a free advance screening to the winner, promoting that contest with a TV commercial.

? Turo, which curated a movie-inspired lineup of classic cars customers could reserve, including the VW Bug used in the supporting commercial. 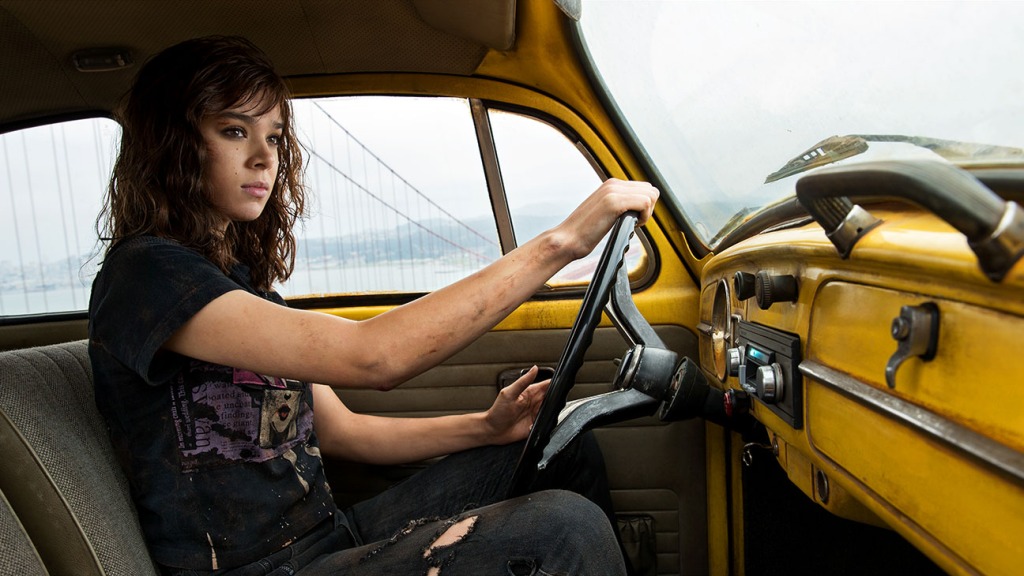 Paramount appears to be hoping audiences who may have been discouraged by the last few Transformers movies give the franchise another chance with Bumblebee. Thus, it has run a campaign that features a human/Transformer relationship viewers can become invested in and care about. The dynamic between Steinfeld’s Charlie and her new robot buddy is at the core of the entire campaign, featured on all the posters as well as in the trailers, clips and featurettes released by the studio in the final weeks.

The focus on Steinfeld, including her original song for the movie, seems aimed at younger audiences who may feel the Transformers have passed their prime, offering them something more relatable. Meanwhile, moviegoers who are a bit older may be drawn in by the promise that the pic features the kinds of character designs familiar to them from the days when they asked Santa Claus for a Soundwave toy along with some of the two-packs of the figures to be ejected from his tape-deck chest.

Bumblebee at the moment sports an impressive 98 percent fresh on Rotten Tomatoes, a score that’s over 40 points higher than any Transformers movie to date.

How Hailee Steinfeld Humanized the 'Transformers' Franchise With 'Bumblebee'