It’s an eternal question, and the implicit basis for just about every science fiction film ever made: What does the future hold? One of the surest answers these days — given most geopolitical indicators, as well as the makeup of the world’s population — is that it’s going to look a lot more Chinese.

Yet Hollywood hasn’t quite kept pace: most studio depictions tend to project a decidedly American vision of humanity’s forays into the future and outer space. The interstellar picture, however, is about to get a lot more diverse.

Over the past year, no genre has captivated the Chinese film industry more than sci-fi. There are now no less than 10 high-profile such projects targeting release over the coming 12 to 18 months, and many of the country’s most esteemed film figures have caught the bug.

“It’s the next big trend,” says Hong Kong director and DreamWorks Animation veteran Raman Hui (Shrek the Third, Monster Hunt). “Even I thought maybe I should try a big sci-fi movie, and my background is family animation.”

As is often the case in China, the first major title to hit the market will star Jackie Chan. Set in the not-too-distant future, Bleeding Steel, a sci-fi action thriller written and directed by Lijia Zhang, features Chan as a hardened special forces agent who gets swept up in a global conspiracy while trying to protect the young inventor of a futuristic technology. Produced by Heyi Pictures and Village Roadshow Pictures Asia, the film is set for a day-and-date release in China and North America on Dec. 22.

China’s first full-scale interstellar spectacular probably won’t come until late 2018, however, with the release of The Wandering Earth, a big-budget adaptation of a short story by Liu Cixin, China’s first winner of the Hugo Award, the highest honor in international science fiction writing. The film is co-produced by China Film Group and Beijing Culture, the red-hot Beijing studio behind mega-blockbuster Wolf Warrior 2 ($870 million worldwide). Set in a distant future — one in which China plays a key role in interplanetary affairs — the story revolves around the imminent explosion of the sun.

Among the many other Chinese sci-fis in the pipeline are: Crazy Alien, an extraterrestrial comedy by hitmaker Ning Hao (2014’s Breakup Buddies, $195.3 million); Realm of the Tiger, a sci-fi superhero movie starring Li Bingbing; Shanghai Fortress, a disaster flick about an alien attack on earth starring heartthrobs Lu Han and Shu Qi; a big-canvas space spectacle called Star Core; sci-fi romance The Girl From the Future; and Pathfinder, an interstellar survival movie about a crew that crash-lands on a desert planet, among others. 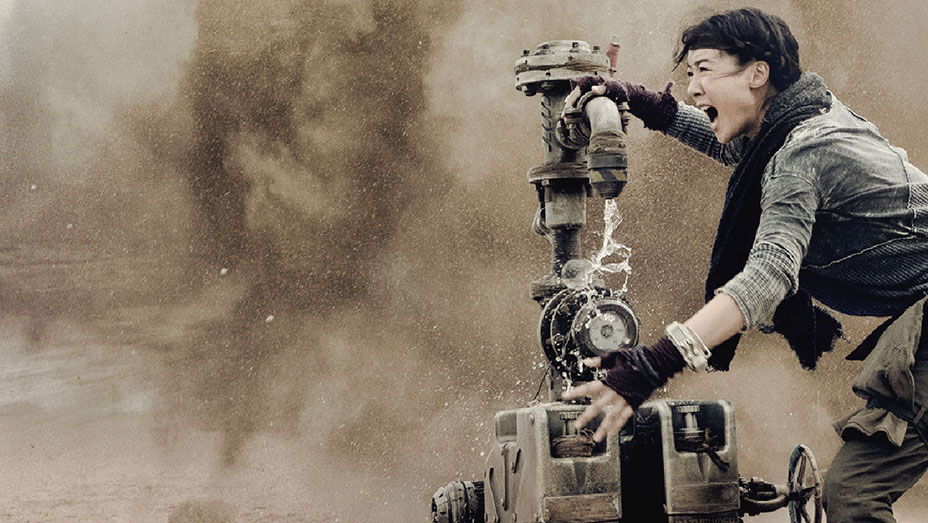 The impending Sino sci-fi wave has local industry leaders looking ahead with a mixture of excitement and apprehension — in part because Hollywood has had such a mixed track record with the genre in China.

The biggest Western sci-fi fantasies, such as Star Wars and Star Trek, have tended to underperform in China. Since most of the local audience is unfamiliar with the original film series, the nostalgia-driven story beats of the rebooted franchises have tended to leave the Chinese crowds confused as often as delighted. But other U.S. sci-fi originals have been smash successes. Christopher Nolan’s Interstellar earned 18 percent of its $675.1 million global total in China; and The Martian took 15 percent of its $630 million haul there. Guillermo del Toro’s Pacific Rim also performed well, earning $111.9 million in China (compared with $101.8 million in North America), back in 2013 when the local box office was half its current size. But Star Wars: The Force Awakens, by contrast, earned just 6 percent of its historic $2.06 billion global gross in the Middle Kingdom. More recently, Blade Runner 2049, which disappointed virtually everywhere, performed especially poorly in China, only taking in $11.6 million there, compared with $90.2 million in North America.

Legacy baggage won’t be a problem from the homegrown fare, of course. Rather, the sheer novelty of the first well-made Chinese sci-fi, on Chinese screens, could generate considerable excitement in the domestic market — it could even attract some box-office notice overseas, where filmgoers have come to expect mostly martial arts fare or period epics from China. There is plenty of inbuilt interest in East Asian sci-fi among the genre’s die-hard fan base, helped in large part by the fact that nearly every cult Hollywood sci-fi is to some extent a rip-off of a Japanese manga or anime. In 2013, for example, South Korean sci-fi dystopia Snowpiercer earned $26 million overseas.

“It’s an opportunity for us to do something fresh, which is very enticing,” says Hui. “But the technical requirements for sci-fi tend to be very high,” he adds, noting that Hollywood has trained audiences in China and around the world to expect a VFX polish that remains beyond the grasp of much of the still-maturing Chinese industry.

Already there have been missteps. A hotly anticipated adaptation of The Three Body Problem, the smash hit Chinese sci-fi novel which won Liu the Hugo Award, finished shooting in mid-2015 but has languished in postproduction ever since. Amid reports that visual effects expenses had more than doubled the film’s expected total budget, the entire postproduction team was replaced at one stage. Yoozoo Pictures, the young studio that initiated the film has since stepped back from the project, with the more established Beijing Enlight (the company behind hits like The Mermaid and Lost in Hong Kong) said to be taking over. A release date remains unconfirmed.

How China Consumes Movies: Breaking Down the Data

Beijing studio Jetavana Entertainment, by contrast, was careful to avoid overshooting its fiscal and technical reach while conceptualizing Dream Breaker, its first sci-fi effort, which it is billing as China’s first original cyberpunk. Set for release in early Spring 2018, the film stars rising actress Chen Duling as a young woman who must fight her way through a mysterious, holographic game world designed by her late father in order to avenge his death.

“Many young Chinese millennials are familiar with the cyberpunk sensibility from gaming and Japanese manga, but they’ve never seen a cool Chinese version in cinemas,” explains Sisi Wu, the company’s former general manager of film production. “Creating the sci-fi world for our story was about conceptualizing really stylish production design and costumes, with the right amount of visual effects, which was something we felt we could deliver.”

But can China really hope to match Hollywood wizardry when it comes to a genre that is especially reliant on eye-catching effects? Wu is cautiously optimistic.

“Trying to beat Hollywood at visual effects is like attacking a giant with a small stick — we have to be smart about it,” she says. “Of course, the situation will be different in the future.”