Not 24 hours after The Big Bang Theory wrapped its 279th and final episode, creator Chuck Lorre whizzes by its soundstage in his golf cart, startled by what he sees.

“They’re tearing the set down already?” he says.

Having created 11 sitcoms over the course of his four-decade career, Lorre should be plenty familiar with studios valuing available space over sentimentality. But even the physical dismantling of his billion-dollar Warner Bros. franchise doesn’t dampen his mood. The 66-year-old comedy vet, once dubbed “the angriest man in television,” seems downright Zen. And why not? Big Bang signs off May 16 as TV’s No. 1 comedy with a stunning 17.5 million weekly viewers in its 12th season, leaving behind the enduring Lorre hits Mom and Big Bang spinoff Young Sheldon on CBS’ schedule — as well as the recently ordered Bob Hearts Abishola. In January, Lorre won his career-first Golden Globe — a best comedy nod for his Netflix meditation on aging, The Kominsky Method, starring Michael Douglas (who also nabbed a Globe) and Alan Arkin.

“It’s taken me a long time to understand that anger isn’t necessary,” says the Brooklyn-born showrunner, who’s married with two grown children. “You can be adamant without being angry.”

The road here wasn’t without struggle. Lorre started in entertainment in 1984 after a financially unfulfilling stint as a musician — his first taste of success came from writing the animated Teenage Mutant Ninja Turtles theme song in 1987 — only to wrestle with Hollywood egos that could put rockers to shame. But a career of behind-the-scenes talent battles (see Roseanne Barr, Cybill Shepherd, Brett Butler and, infamously, Charlie Sheen) gave the man behind Dharma & Greg and Two and a Half Men clarity — and some very good stories. Taking a breather in his Burbank office before Big Bang‘s wrap party, THR‘s TV Producer of the Year talked lessons from those low points, odds on another Big Bang spinoff and what it will take to keep him from leaving Warner Bros. when his nine-figure deal is up in 2020. 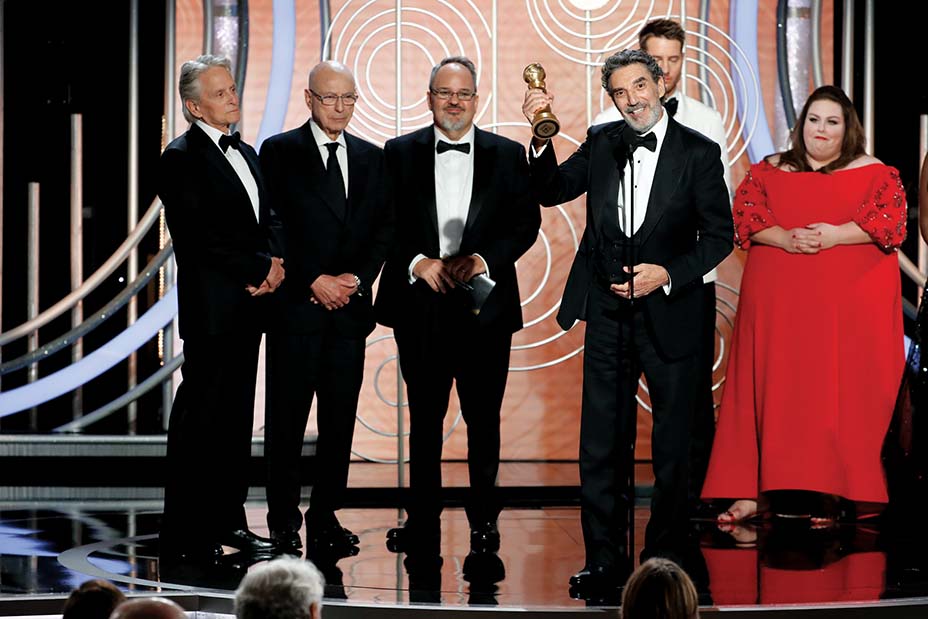 With The Big Bang Theory, how important was it for you to …

To land the plane safely? It meant a lot — to be there from our very clumsy beginnings, to when we actually figured out how to do it and sustain it, to ending with what I think is a wonderful [episode]. I know what it’s like to leave too soon. I never want to do that again.

You regret leaving Dharma & Greg one season before it ended?

I made a mistake. I got to make that up this time.

Did you go to anyone for advice on how to land that plane?

I didn’t have a clue how to do it. Steve Holland, who’s been the showrunner for the last two years, suggested that rather than bringing the show to a hard stop — where everybody packs their bags and goes in different directions and the show is exploded in some final way — that we have an emotional finale. I thought that was brilliant.

Originally, there were talks of renewing it for 13th and 14th seasons, but Jim Parsons came to you and said he was done. Is that right? 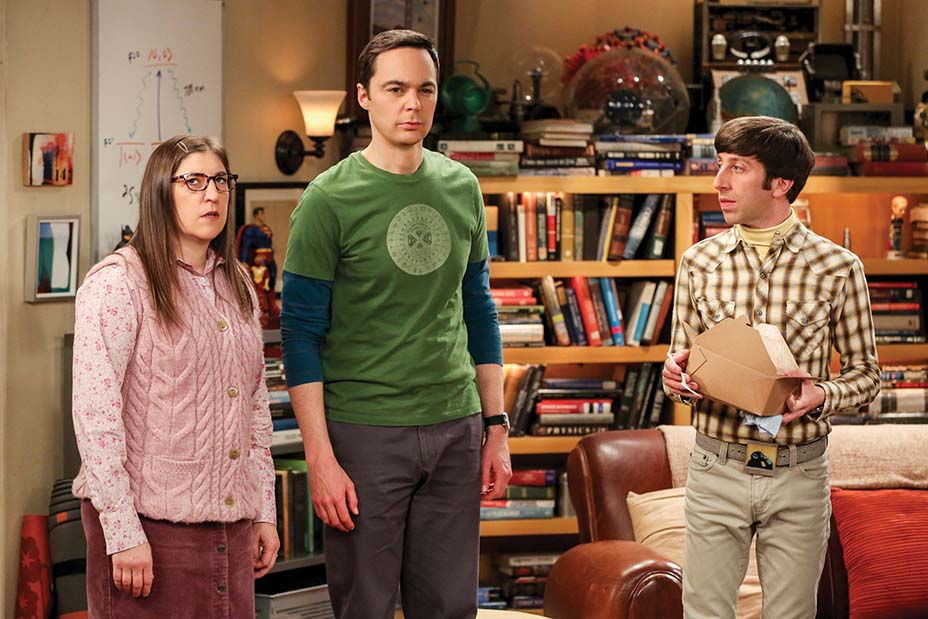 Parsons aside, did you have any hesitations about continuing?

My hesitations might’ve been about my ability to keep going. But I never felt it was my place to get in the way of this show. Considering the extraordinary success and the economic nature, I didn’t want to step in front of it. It gets bigger than you and you’ve just got to get out of the way.

The show is still huge.

It’s the tank in Tiananmen Square. I’m not the guy to stand in front of it. Proceed. If they wanted to keep going, I would’ve said “God bless.” It’s hundreds of people that are making a living on this show. You don’t want to stop that.

Any talk of a spinoff for the other actors?

I can’t speak for them.

You can speak for yourself.

Truthfully, the reason for a spinoff is economics, and that’s not the reason to do a show. You should do a show because you have something you really love, and you want to do it. Economics follow passion. If you start with economics … well, shit, become a network executive.

But you could say that there was an economic pressure to make prequel Young Sheldon.

Nobody asked us to do Young Sheldon. It flowed rather elegantly from a conversation with Jim. We’d already written his backstory, and we were excited about it. If money follows, great.

So, no gestating ideas for anything with other Big Bang characters?

You can’t help but gestate a little …

How involved are you on shows like Young Sheldon and Mom?

I try and contribute without being destructive. I’ve experienced, and I think most writers in TV have experienced, the guy who comes in at the last minute and throws a hand grenade and leaves. He’s a hateful person, because the writers work their asses off for hours and hours, generating something that they believe in, and then you come in at the last minute and go, “This doesn’t work.” It can cause fantasies of murder. (Laughs.) 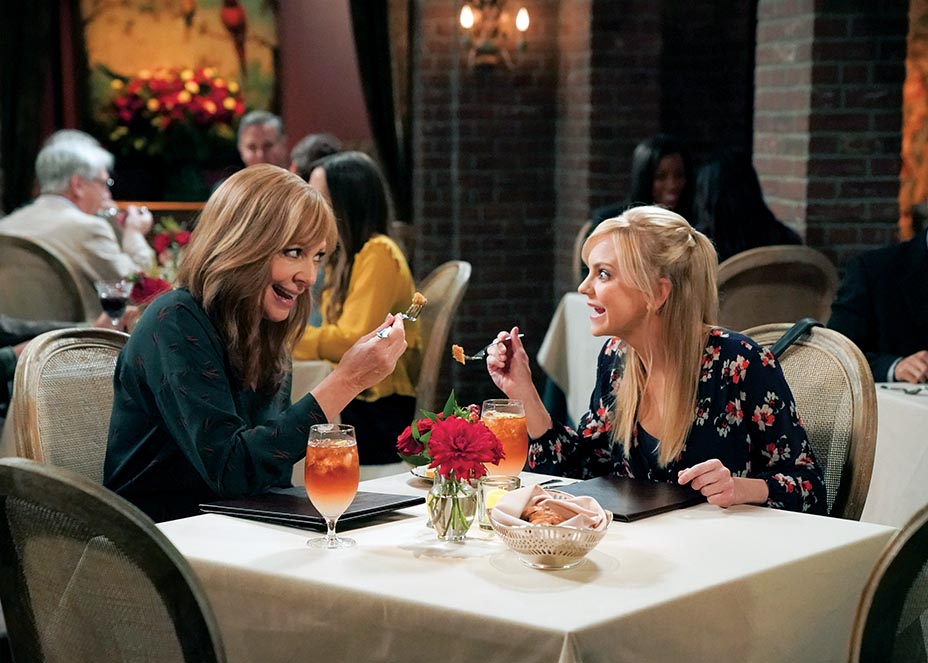 Which show are you most involved with?

I micromanage the hell out of Kominsky. That’s been my baby this year.

How regimented does this require your daily schedule to be? I’ve heard you schedule your bathroom breaks.

You can’t schedule bathroom breaks with a bladder this unpredictable.

Speaking of, what are some of the more personal pieces of you in Kominsky?

None of your fuckin’ business. (Laughs.) The process of getting old felt like a story to me. When it’s not tragic, witnessing your body decay in front of your eyes is amazing. The “I” doesn’t have an age. It walks past a mirror and goes, “Yikes, who’s the crypt keeper?”

You won a Globe for Kominsky out of the gate. How’d you digest that?

I don’t want to digest it. I want to chew on it forever. It was great validation.

Has it changed your status or perception in Hollywood?

That would require me assuming I know what other people think of me. I’m still coming to grips with what I think of me. (Laughs.)

Well, you were once labeled “the angriest man on television.”

Because I was fighting with network executives all the time. I was trying to get my way with broadcast standards, all that note-driven nonsense. I had my fists up because I had a vision. Even though they were sitcoms, maybe considered a bastard genre, I still wanted to do it well. The anger was the only way I could carve out some safe space to do it — because there’s a lot of people telling you how to do it, especially when I got started. There were company executives, network executives, stars, managers of stars, husbands of stars, boyfriends of stars … everybody had an opinion. Why not fight for some autonomy?

What was the biggest fight you’ve had?

There was a lot of pushback when I was doing Two and a Half Men. They didn’t want Jon Cryer. He’d been in a series of pilots that didn’t get on the air — or, if they did, they got canceled — and he got pinned with that label, “show killer.” 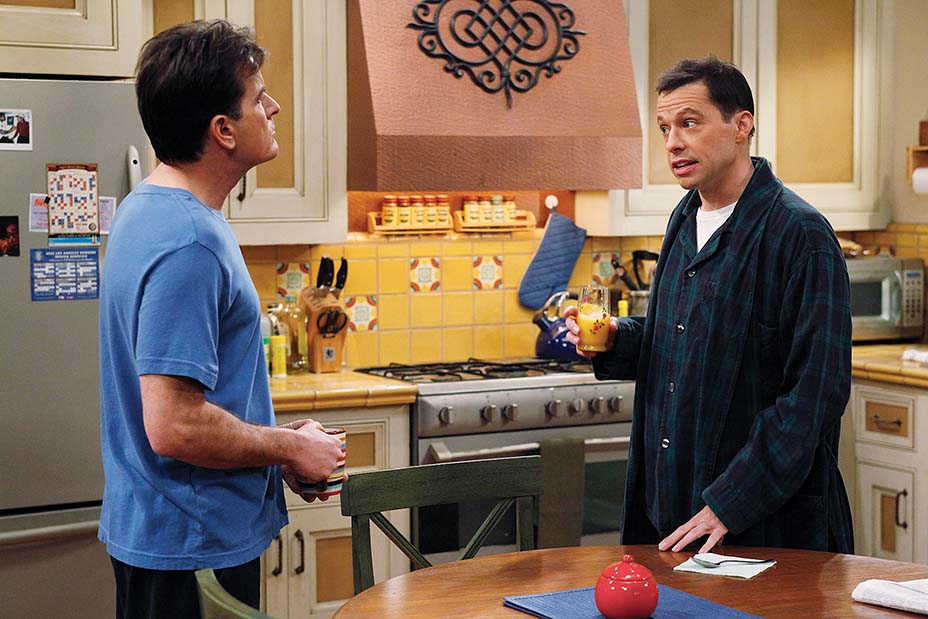 You’ve had other casting battles.

They didn’t want Melissa McCarthy on Mike & Molly. A year later, she did Bridesmaids and became a superstar. In casting, you’ve got to fight for what you believe in.

Was Christine Baranski an easy sell on Cybill?

Marcy Carsey and Tom Werner were familiar with Christine from Broadway, so they flew her out to read. Christine Baranski auditioning, can you imagine that? She was brilliant. CBS didn’t want her. I believe the head of comedy development, who I won’t name, used the words “death of comedy” when discussing her.

And now she’s the face of CBS All Access.

I was sitting next to Marcy, and I could feel every muscle in her body tense up. She just went, “Well, we’re going with Christine Baranski.” I realized [then] the extraordinary leverage that comes when you have shows like Roseanne on the air. So, we got Christine. And I got about 18 episodes before I was fired.

… Roseanne, Brett, Cybill, Charlie. What lasting effects do you think the cultural shift in Hollywood will have on people like that?

You’d think that behavior across the board has to improve dramatically. A hostile work environment doesn’t create good stuff. It creates fear, anxiety and colitis.

What are some of your low points — and what did you learn from them?

The whole experience with Charlie Sheen was heartbreaking. What do you learn from it? That ridicule will not kill me. Everybody was, for the best of all reasons, trying to be helpful — and all we were doing was causing harm by trying to be helpful. Getting fired by Cybill [Shepherd] was another low. If I recall correctly, there was a disagreement about whether the second act worked for an episode. I dug my heels in and wouldn’t change it — and I was told not to come back. Don’t pick a fight with the star. (Laughs.) Lesson learned.

When was the last time you had to fight over the content of a show? 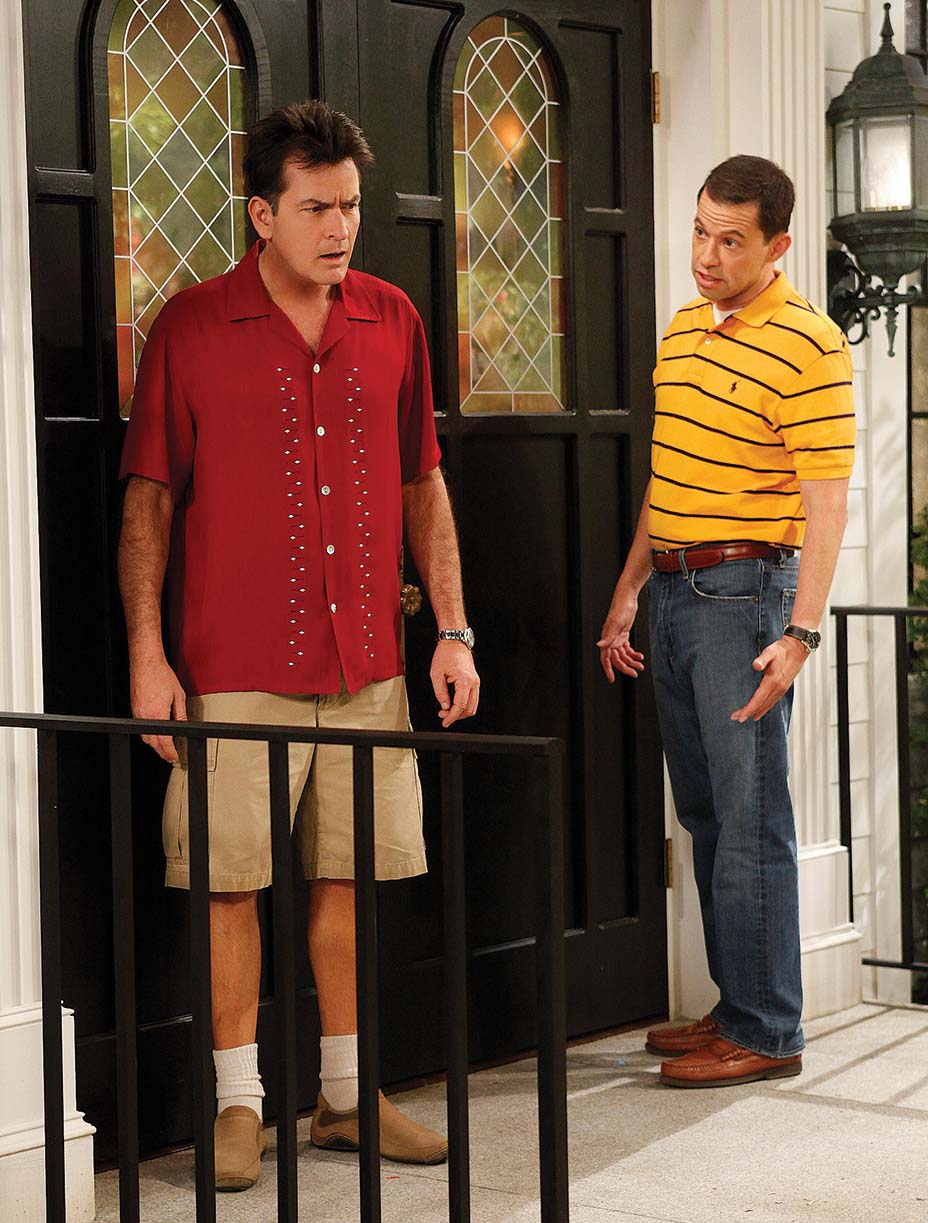 The current feud between the WGA and the agencies means most writers don’t have agents. Do you think they need them?

You shouldn’t represent yourself. The closest I’ve ever come to representing myself, I started crying. We don’t represent ourselves well. But since I’ve been at Warner Bros. — even before, back at Fox — I was making four-year deals. And I decided I didn’t need an agent to make one deal that lasts four years. I needed a lawyer. So I had lawyers make those deals. [Per Lorre, he has had a verbal agreement with UTA to rep him outside of TV since 2015, though he notes he has yet to make any deals outside of TV.]

What’s your take on these massive overall deals that your peers have signed?

I’d rather see the money go to Shonda [Rhimes] than some faceless, monolithic, globe-straddling corporation. She’s going to make something — likely something really cool. Nobody blinks when the money goes pouring into some company, but somehow it’s an issue when it goes to a person?

If they’re giving somebody $100 million, they’re not doing it out of goodwill. They’re doing it because they anticipate making $1 billion. That happens because a person has proven they can do it. That’s leverage.

You have leverage. What will factor into your next negotiation?

I’ve been really lucky, I’ve done really well. Kominsky taught me that I can work my ass off on something that’s close to me. The only priority is getting up in the morning and being excited to go to work.

Does the end of Big Bang make you want to slow down a bit?

Generating 22 episodes that you’re proud of … it’s a murderous schedule. Somewhere around 17 or 18, you’re exhausted, just dead inside, and everybody is sick. The first year of Kominsky, we did eight episodes to accommodate Michael’s schedule — but also because it felt like the right number. We’re not treading water. There’s no economic motive behind it. If you’re in business affairs at a big corporation and you hear some clown like me talking about “the right number of episodes to tell the story,” you want to smack ’em. But at this point in my life, that’s what I want to do. I don’t want to be driven by the economics of it. I’ve benefited from those economics, but it’s maniacal.

Have your new bosses from AT&T asked you to make a shorter-order show for the new WarnerMedia streaming platform?

No. I’ve still got to switch over from Verizon. AT&T doesn’t do well in my neighborhood. 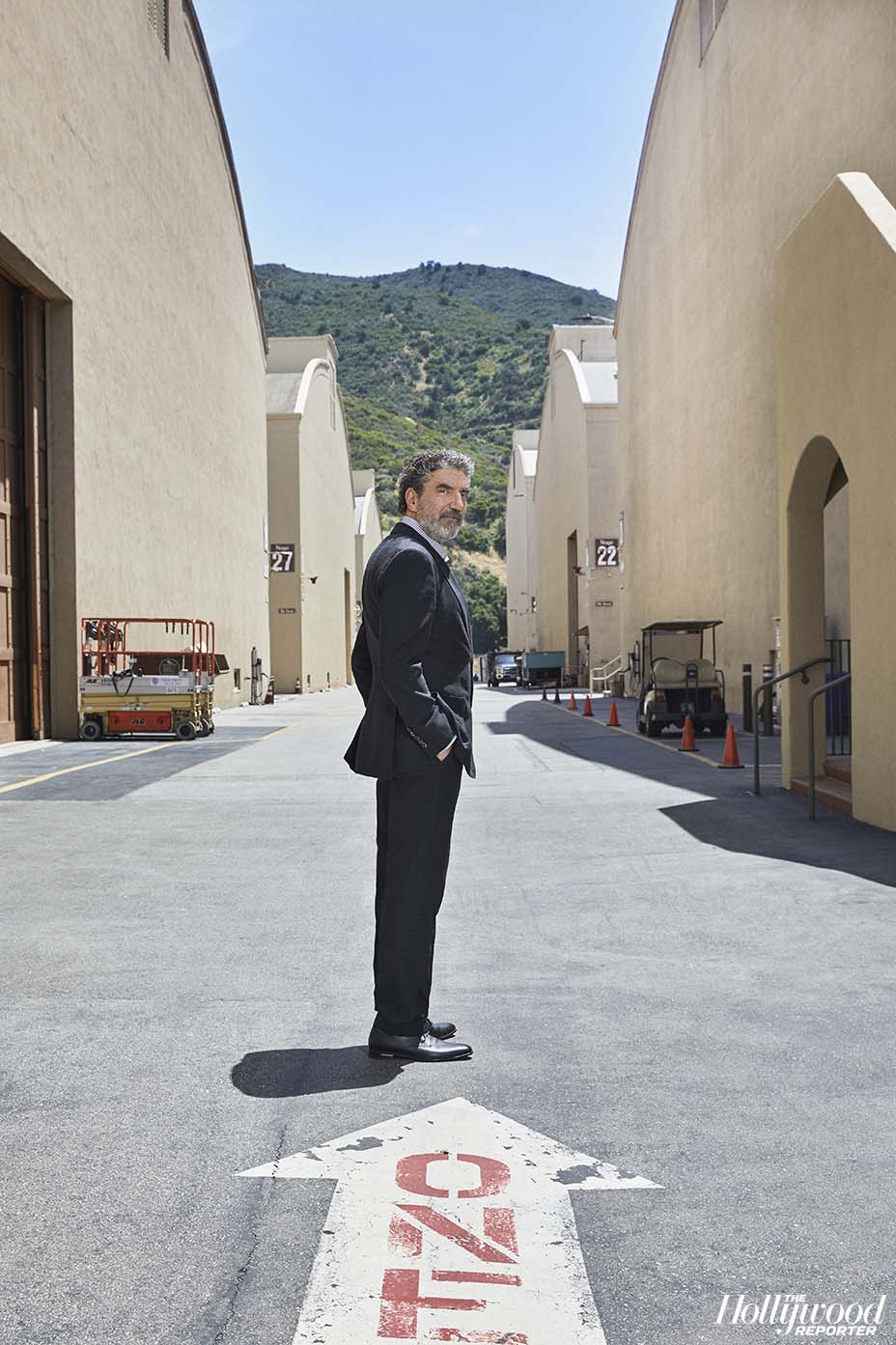 This story first appeared in the May 13 issue of The Hollywood Reporter magazine. To receive the magazine, click here to subscribe.