There’s much to love about Pixar’s wonderful new film, Coco; most likely audiences will adore its stunning animation, which is vibrant, exuberant, and positively alive despite being set in the Land of the Dead. Coco spends most of its time in the company of skeletons and alebrije than living, breathing, flesh-and-blood types, but in keeping with the spirit of Dia de Muertos, the Mexican holiday of remembrance for lost loved ones, the film rarely feels funereal. Instead it’s celebratory, a dedication to life, to family, to Mexican culture at large, and to Dia de Muertos itself. For practitioners of the holiday, Coco may feel like a love letter, or perhaps an homage, but to the rest of us it feels like an invitation.

'The Legend of Vox Machina' EPs on Season 2, Adapting an RPG for TV and Amazon as a Home for Animation

You won’t walk out of the movie wishing away your vitality, but you’ll probably want to know more about Dia de Muertos, which may be at least part of the point.

Coco, first conceived back in 2010, began as the product of a white filmmaker working for a predominantly white-led studio. It’s also true that during production, Disney, Pixar’s parent company, got it in its head to try to trademark the phrase “Dia de los Muertos” for ostensible merchandising purposes. If the story of Coco was defined only by this element, the element of outsiders borrowing narratives from a culture other than their own, maybe the film wouldn’t feel as essential as it does in 2017 (though quite frankly, it’s essential even in the context of Pixar’s filmography, too). Because along the way, between 2010 and now, Unkrich and Pixar opened up production to allow Mexican American creative voices a seat at the table, like cartoonist Lalo Alcaraz, playwright Octavio Solis, erstwhile Mexican Heritage Group CEO Marcela Davison Aviles, and of course Adrian Molina.

Alcaraz, Solis, and Aviles make up Coco’s cultural consultant group, but Molina, who started off on the project as a screenwriter and earned co-directing credit for himself last year, is one of its storytellers. That, combined with the film’s voice cast of Latin-American actors, makes Coco feel like an honest attempt by a major studio at honoring a significant cultural tradition, and in 2017, that can read as something of an act of defiance. Making Coco without the input of its consultants would have been easy, though the result would almost invariably have been embarrassing at best, insulting at worst. Making Coco in its present form takes considerably more work, but the result of that work speaks for itself: Not only does Coco succeed as a film, it succeeds as a commemoration of its subject matter. 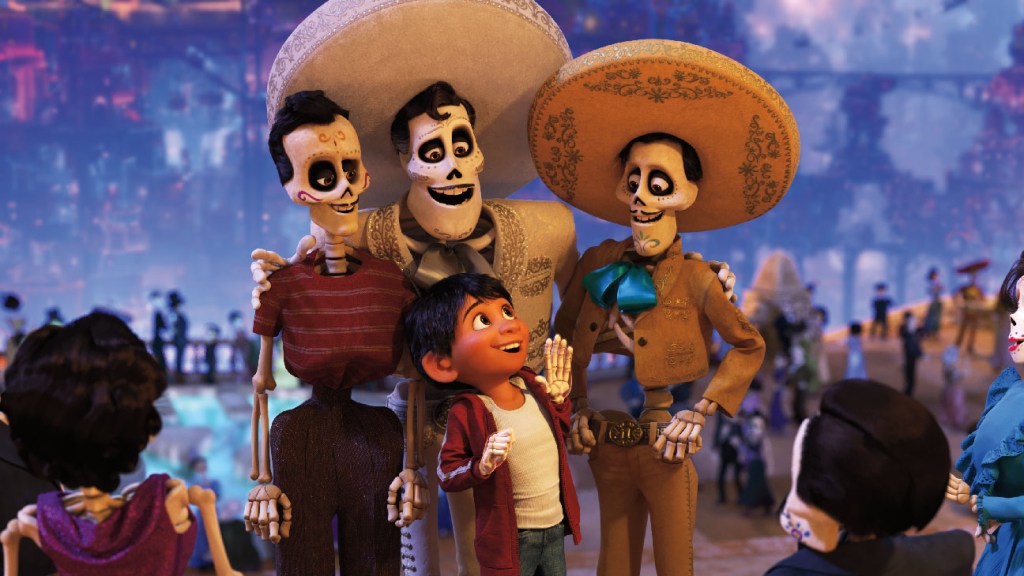 This is a big, screaming deal for the political moment we’re going through in America right now, a moment colored in part by open disdain for Mexico and its people by our government. Absurdist talk of a border wall dividing the United States from Mexico is close to graduating from “talk” to “action,” with prototypes already upright and in place along isolated corners of San Diego’s borderlands. Coco has nothing to do with The Wall, though in its own way it is about borders, being the border between the realms of the living and the dead, but really, the film doesn’t actually have to be about anti-Mexican sentiment on the rise in the United States in order to have something to say about it. Just by being what it is — a top- down cross-cultural creative collaboration about an important Mexican holiday — Coco sends precisely the message it needs to.

That message may have been marred by news from behind-the-scenes at Pixar, which has seen Pixar and Walt Disney Animation head John Lasseter take a leave of absence amid allegations of misconduct. And Toy Story 4 writers Rashida Jones and Will McCormack have stated they left the project because Pixar has “a culture where women and people of color do not have an equal creative voice.”

When Coco ends, it isn’t just the Land of the Dead we’re reluctant to say goodbye to. It’s the people Molina and Unkrich have created to populate that land, and the people they’ve left behind in the world of the living. Coco’s beauty isn’t only found in its color palette. The bond Molina and Unkrich build between the audience and their characters is a thing of beauty, too. You might not observe Dia de Los Muertos, and it might not belong to your own heritage, but you’ll see bits and pieces of yourself in the story of the Rivera family’s history regardless.

You’ve probably rebelled against the wishes of your parents and grandparents, too, bristled at the path your elders have laid out before you in your youth, tried to break free from what feels like predetermination defined by ancestry. That’s the stuff that Coco is made of, and that stuff allows the film to cut through the cacophony of racism normalized by 2016’s general election, quietly but firmly speaking against that tide of prejudice through presentation. Art connects us to other people and other cultures. Coco connects us to both at a time when these connections are more necessary than ever.