In this week’s episode, J.K. Simmons talks about his role in Defending Jacob, Apple TV+’s limited series about a couple (Chris Evans and Michelle Dockery) whose son is accused of murdering his classmate. The family dynamic is made all the more complicated because the young man’s grandfather (Simmons) was convicted of a brutal crime, making the family (and law enforcement) wonder if that “murder gene” could have been passed through the family.

'Spirited': Ryan Reynolds and Will Ferrell's Musical to Hit Apple TV+, Theaters in Time for Thanksgiving

Simmons, who won the Oscar for his role as an intense jazz band teacher in 2014’s Whiplash, plays William “Bloody Billy” Barber, who is in prison for the grisly crime he committed. Simmons says it was the script, written by Mark Bomback, that made him interested in playing the role. “The thing that I look for in scripts in general is when you’re playing a character who’s done such terrible things, it’s easy for a writer to be lazy, an audience, an actor, to be lazy, and just go, ‘Oh, he’s evil. He’s terrible. He’s the bad guy’— which he is. But Mark is smart enough and kind enough to offer us little glimpses here and there into this guy’s humanity,” he tells THR. “Whether or not you can empathize or sympathize with him, you at least have a glimpse into his psychology and his damage and his humanity.” 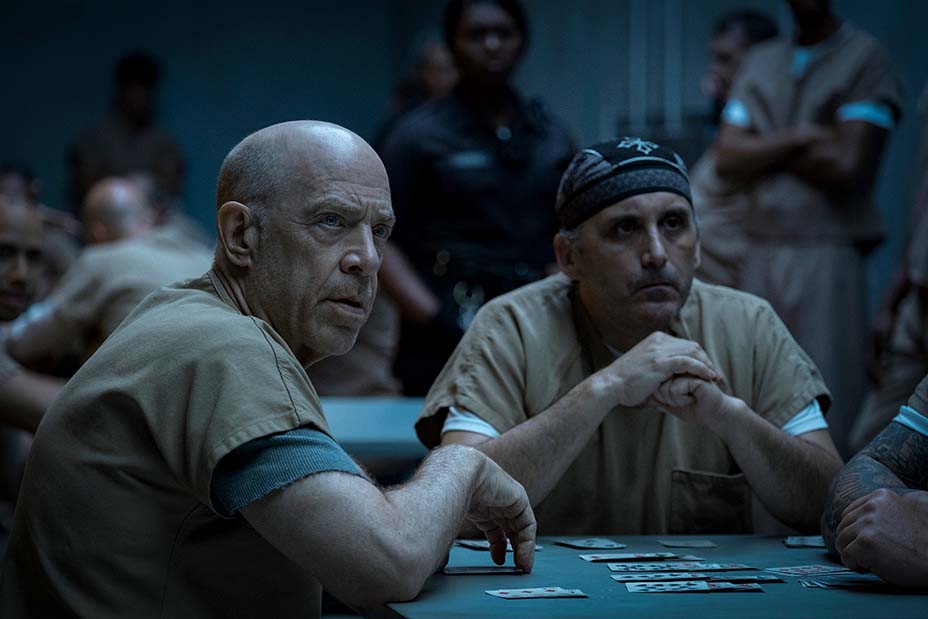 The project also reunited Simmons with Morten Tyldum, the director who worked on Starz’s Counterpart, which starred Simmons. “Morten’s a real visionary. I think it can be an overused word in our business, but his visual sense is so far over my head that it’s something that I appreciate about what he brings to the table, too,” says Simmons. “And in this case, I mean usually in eight episode, eight different hours, you’re going to have at least three or four different directors on it. So to know that Morten was the director for essentially an eight hour movie was a great thing in terms of just continuity and knowing that this is the guy that has his hands on all aspects of this, and a really thorough understanding of where everybody’s coming from.”

Fans of Simmons’ work will no doubt enjoy seeing him back in a prison jump suit for the Apple TV+ series, which debuted on April 24. Simmons’ role on HBO series Oz, in which he played the inmate Vernon Schillinger, the leader of the prison’s Aryan Brotherhood, is considered one of his most memorable over his long career. “That whole show, created by Tom Fontana, was such a groundbreaking and brilliant piece of work that all those of us who really got big breaks from that show are eternally grateful for it,” he says of Oz. “Having said that, I even went into that job expressing to Tom my fear that if this show has the impact that we think it might, I’m going to be stuck playing the psycho white Nazi murdering bastard for the rest of my career, and I don’t want to do that. So he allayed my fears and enough fortunate breaks have come along in the meantime, playing very different characters, that it wasn’t a concern of mine at all to be going back 20 years later almost to be playing another incarcerated, horrible human being. Because in both cases, there were occasional glimpses of humanity that made it a compelling and a complex character to play.”

Simmons also spoke with THR about his favorite projects over the years, and also his take on the announcement that Zack Snyder will be releasing a Director’s Cut version of The Justice League (Simmons played Commissioner Gordon). “I’m always in favor of a director’s vision, especially a filmmaker who’s been so iconic in that genre in general,” he tells THR. “There were obviously a variety of reasons for the way things shook out the first time around with that film. Whatever your feelings were about the version that was at first released, I think even if you absolutely loved everything about that film, I would certainly be interested as an audience to see Zack’s vision. The one thing I do know for sure is that it will be long, because he’s got a lot of stuff that he wants to get in there.”

For much more from Simmons on Defending Jacob and how he’s navigated his career in the years since Oz, tune in to the latest episode of In Conversation With.