[The following story contains spoilers for You season one.]

Elizabeth Lail has had an eventful first five years in Hollywood. After graduating from the University of North Carolina School of the Arts in the spring of 2014, Lail quickly landed the role of Anna (based on the Frozen character) on ABC’s Once Upon a Time. From there, Lail wasted no time as she became a finalist to play Kara Danvers/Supergirl on CBS’ Supergirl. Shortly thereafter, she landed her dream job at the time by way of David Fincher and HBO’s Videosyncrazy, which halted production after just four episodes and never resumed filming. To recap, all of these events took place within the first few months of her acting career.

In early 2016, Lail booked a starring role on Freeform’s Dead of Summer, which lasted 10 episodes. After a couple of guest spots on The Blacklist and The Good Fight, 2017 paved the way for what would become her biggest casting to date as Guinevere Beck, the female lead on Lifetime’s You. The psychological thriller premiered on Lifetime in September 2018 but was canceled just three months later. Fortunately, Netflix, who already owned You’s international distribution rights, swooped right in and renewed the series for season two. The first season then hit Netflix (in the U.S.) on Dec. 26, 2018, and within a month, the streamer reported that You had been watched by 40 million Netflix members. Despite a tragic fate for Lail’s character, she couldn’t be more grateful for the experience.

“It feels like icing on the cake,” Lail tells The Hollywood Reporter. “You never really know what you’re getting involved in, and you have no idea if anyone will want to watch it or not. People were so invested in her fate, and it’s created so many interesting — and important — conversations about toxic masculinity and online stalking. I’m still grateful, and it’s still influencing my career to this day.”

The success of You quickly led to Lail’s first feature offer as the lead role in STX’s Countdown, a horror film about an app that predicts the exact time of a person’s death. For the first time in her career, Lail enjoyed the process of hosting chemistry reads involving her male counterparts.

“That was fun for me because I’ve always been the one testing with the guy who’s leading a show or movie,” Lail explains. “So, this time, everyone had to test their chemistry with me, and that was a really rewarding experience for me.”

In a recent conversation with THR, Lail also discusses her return on You season two, her experience with Fincher on his now-defunct HBO show and the particulars of her Supergirl audition.

It’s a lousy first question, but if this life expectancy app actually existed — minus the demons — would you download it out of morbid curiosity?

(Laughs.) I decided that I would not download it. The less apps I have on my phone, the better…. I prefer to live in the moment and hope for the best. If I ever read that I’m most likely to die between the ages of 72 and 76, I wouldn’t be able to get that out of my head…. I wouldn’t be able to undo it or unthink it. So, no, but that’s just me. I think a lot of people would download it.

Has this movie led you to read user agreements more often?

It has not. Apparently, I don’t learn anything. (Laughs.) I haphazardly agree to the user agreements just like everyone else. If anything, it’s made me want to start a movement that makes user agreements more simple and to the point. At least make them easier to read. 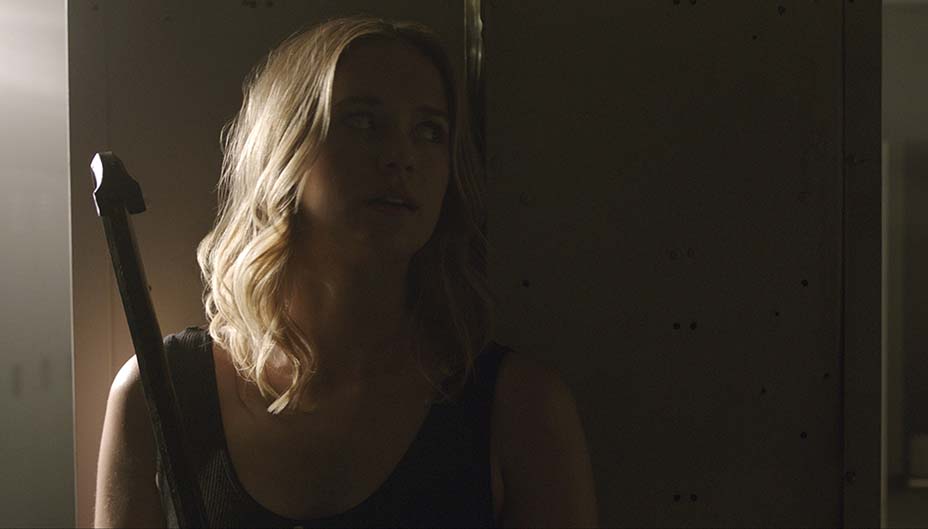 Was there anything unusual about the casting process?

It was the first time that I got to do chemistry reads, which were with the actors auditioning for Matt. That was fun for me because I’ve always been the one testing with the guy who’s leading a show or movie. So, this time, everyone had to test their chemistry with me, and that was a really rewarding experience for me.

And Countdown was also your first offer?

How far removed from You did you receive the offer?

Maybe like six months or so. It was very soon after it had released on Netflix.

On the Conjuring sets, a priest has to bless their sets because a lot of creepy stuff has happened over the years. Did anything unusual happen on the Countdown set?

Wow. That scares me. No, nothing, really. It was such a fun and joyful set on top of being creepy and scary. Everyone was so happy to be there; the energy was so positive. I think we expelled any negative energy ourselves just by being beams of light, regardless of what we were making.

Actors have told me that they get creeped out making horror movies despite the presence of a looming boom operator. Others tell me that they just feel a bit goofy during the scary moments. Were you ever genuinely frightened during various takes?

There’s some sexual harassment in the movie, and that makes my skin crawl a lot more than the jump scares or seeing the demon [Dirk Rogers]. I tried really hard to not see the demon until I was on camera and ready to shoot for the first time. It’s pretty miraculous what the makeup team can create.

Would they separate you and your castmates from the demon in order to keep the illusion going?

Only in the beginning — before I had seen it for the first time. Dirk would sit with us on set, and I felt so bad for him because he had these fake teeth and prosthetics that made it very hard for him to eat and drink. I found myself trying extra hard to treat him with kindness, just like everyone else, because his costume was so horrible to look at. (Laughs.)

You had hilarious scenes with Tom Segura. Were those scenes all on the page, or did writer-director Justin Dec let the two of you run wild with improv?

I think my lines were written, but Tom, as a professional comedian, was improvising quite a bit while we were filming. He’d do the gist of what was written, but he’d also add his own personal comedy to it. I think he’s incredibly funny. Along with P.J. Byrne’s Father John, those are my favorite characters in the movie. They bring so much levity and fun to the movie. 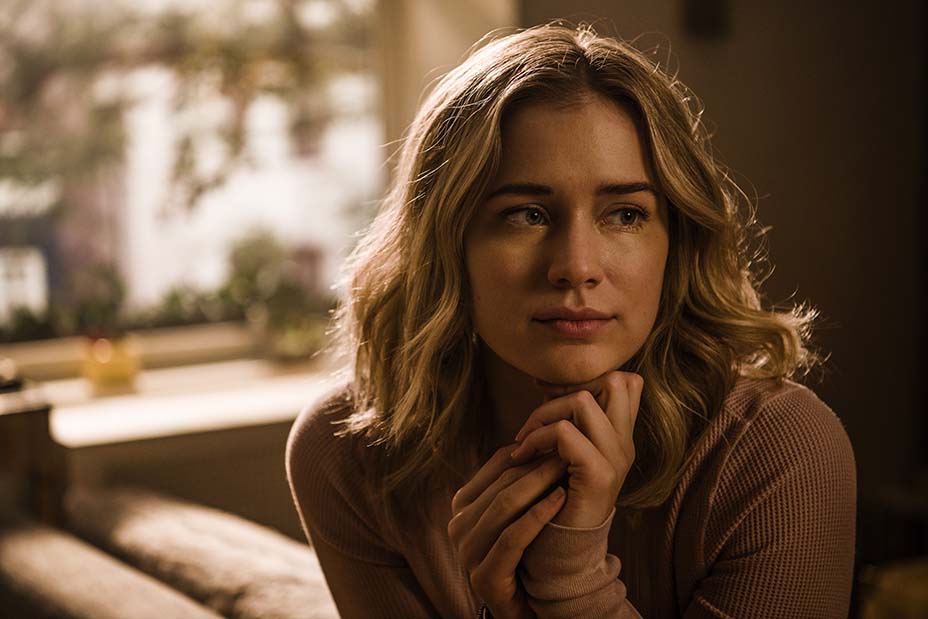 Similar to Breaking Bad, when You launched on Netflix, it became a phenomenon. Even though you were aware of Beck’s fate from the start of the project, did the feeling become bittersweet once 40 million people watched it within its first four weeks on Netflix?

No, it feels like icing on the cake. You never really know what you’re getting involved in, and you have no idea if anyone will want to watch it or not. It made me even more grateful to be a part of it than I already was. People were so invested in her fate, and it’s created so many interesting — and important — conversations about toxic masculinity and online stalking. I’m still grateful, and it’s still influencing my career to this day, which is great.

Did the material make you more paranoid in your own life? For example, do you guard your phone now more than ever?

I’d say that it’s made me braver in my own life. Prior to that, if someone who I just met asked me for my phone number, I’d probably just give it to them to avoid any awkwardness. That’s just the nice girl inside of me who doesn’t want to come off in a particularly negative way. But, now, I would definitely be like, “No, you can’t have my phone number. Maybe, you can email me…. Or, I’ll never see you again….” (Laughs.) If anything, it’s made me realize that personal boundaries are healthy, and they’re worth setting. It’s best to tap into that sooner rather than later before something horrific happens.

I can’t imagine a scenario where Beck doesn’t return to the show. Is it safe to say you’ll be back for You season two in some capacity?

Well, I hope your Force Ghost, or whatever form you’re in, drives Penn Badgley’s Joe to the brink of insanity — even though he’s already insane.

You’ve had quite an eventful first five years in the business. You were very close to being cast as Supergirl, and you were actually cast on a David Fincher HBO show called Videosyncrazy, which halted production after four episodes. Can you tell me about your brief time with Fincher?

Oh, it was incredible. It’s one of the hardest things I’ve ever had to do. I remember leaving set feeling sore. Every part of me was being used entirely: my emotional self and physical self. I just loved it because it was an incredible challenge. I really want to work with him again; I just really look up to him and am a massive fan. That was the second job I ever had, so it was a real learning opportunity. Even to watch the other actors I was working with, such as Kerry Condon and Jason Flemyng, was amazing because they’re such pros. I was sad that it had to end because it was a dream job for me.

Is that still the most takes you’ve ever done on any job?

Definitely, yeah! (Laughs.) I’d love to give it another go because now I’m further along in my career. I’d be interested to see what my stamina is now versus then.

Were you just on set one day when a producer announced that you had to stop? Is that how the shutdown worked?

I’ve heard a few actors talk about their screen tests for superhero roles and how they’ll purposefully ask to go to the bathroom just so they can take a picture of themselves in the costume if they don’t get the role. Were you able to do something similar for Supergirl?

No, I think I was in my own clothes. I did have to pretend to fly at one point. There was some wind machine. (Laughs.) We did stuff between Kara and her sister if I remember correctly. We did the human interactions in the pilot when she hadn’t quite become the superhero that I’m sure she is now. That was so much fun for me. I loved doing that test. That was my first time acting on the Warner Bros. lot, and that was a career highlight for me at that time. It was really exciting.

While Countdown has plenty of laughs, your last three projects have been pretty dark. Nevertheless, have you told your agent to find you something lighter in the near future?

(Laughs.) I think I tend to be attracted to dark things, but I definitely wouldn’t mind a romantic comedy. To me, all of this is a challenge in its own way, and I’m usually just looking for whatever resonates with me at the time. I like to keep myself open to whatever projects and opportunities might come my way. Sometimes, I’m surprised by what resonates with me, but I just try to trust my gut instinct on that.