Ho Che Anderson continues to build out the pulp universe of his Stone prose series with this week’s new release, Rizzo — a title that also features exquisite illustrations from Jesusfreak and American Blood artist Benjamin Marra. The Hollywood Reporter has a preview of both Anderson’s writing and Marra’s artwork.

Part-jailbreak story, part-political thriller, Rizzo sees its eponymous hero work to enact his plan to overthrow the family controlling the city he lives in… just as soon as he manages to escape from the prison he was thrown into years earlier. All he needs is the help of his friends, and for the elaborate heist he’s been planning for some time to come together…

Zack Estrin, Showrunner on Netflix's 'Lost in Space,' Dies at 51

The title, the follow-up to the recently released Stone, will feature 15 illustrations from Marra, including 5 full color paintings — the first time Marra has ventured into fully painted artwork.

“Ho Che Anderson is a legend whose comics work I’ve been following for decades,” Marra said in a statement. “I have a tremendous amount of respect and admiration for his talents as a writer and artist. It’s been a special honor to get to know him as a friend and an incredible experience to collaborate with him on this project. I hope it’s the first time of many. The story Ho Che wrote is pure pulp crime genre goodness. It’s exactly the kind of thing I love and which inspires me to make art. It was easy to be inspired by his prose to create the illustrations accompanying the narrative, and I hope my images do his words justice.”

Rizzo will be released digitally Oct. 20. Keep reading, however, for an exclusive sneak peak not only at Marra’s illustrations, but also the first chapter from the title — as well as the cover to the book, from design house WBYK. 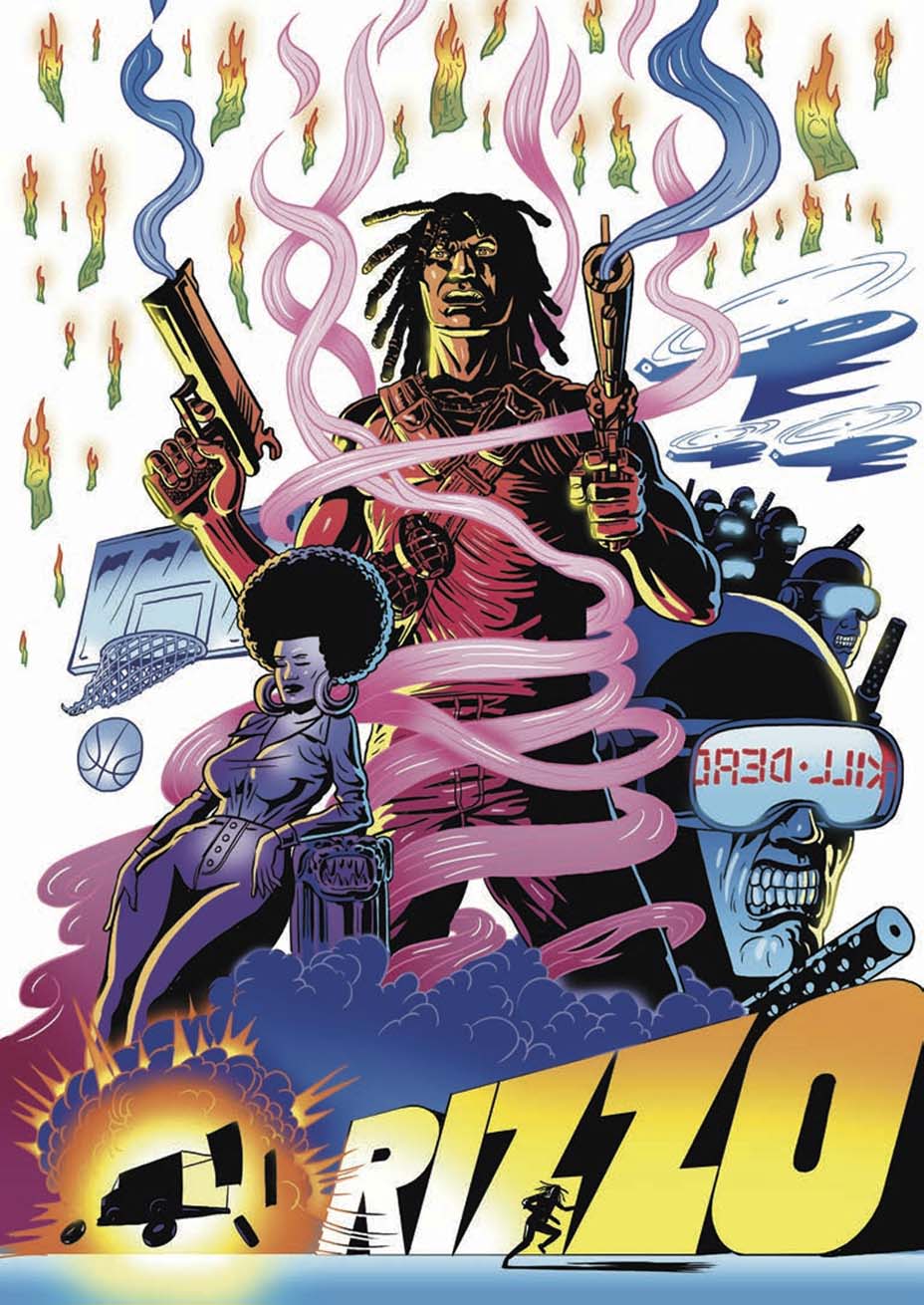 Every morning they awoke to the sound of dogs.

Even before the bell sounded or the boots started yelling and hitting their sticks against metal, it was the dogs barking, excited to be dogs doing what dogs do, that signaled it was go time.

Rizzo sat on the edge of his bunk, watching his breath wisp and dissipate, listening to the hounds, trying to isolate one bark in particular. Nothing.

Now came the boots, barking loud as the dogs. The only detainees who required a little incentive to rise from a short troubled sleep were the new ones, not yet used to existence as an ex-human, the ones still clinging to the memory of when their lives were their own. A broken finger, plus a work detail minus their footwear, plus a garnished day’s rations and the fish soon realized down whose stream they swam.

Rizzo at the front of the twelve-man line, gang leader and not a job he ever wanted, ever asked for. But Rizzo was Rizzo. Six-six, two- forty-five, all of it muscle and brains. So there he stood on point, the first to have his hands cuffed and chains shackled to his ankles. The dogs sniffing his crotch and his crack, leaving wet patches. The bulk of the chain weighing him down, hurting his joints, making it difficult to walk, to work, to think, to breathe, that weight, always there, even when the shackles were removed.

Out of the chain house they marched, past tent city and the canteen and on toward the kennel. Rizzo spotted what he was looking for: the cage just outside the kennel. Empty this morning. Rizzo’s eyes swept the grounds, searching, seeing nothing but broken men, crumbling brick and concrete walls, barbed wire, and shabby canvas tents.

Yelling and scuffling at eight o’clock. The entire chain turned to watch two boots dragging a detainee by the ankles from one of the tents out to the yard. Screaming for his mother. His hands bound behind his back, a rope strung through the binding. Watched the boots put the rope into a metal loop in the rafter of a burned out portable at the base of the smoke stack, and hoist the man two feet off the ground by his wrists. Basic stress position.

“Sir,” Rizzo said, watching the stain form and spread in the man’s crotch. If only shutting out his screams were as easy as looking away.

“Chain-hut!” Rizzo yelled, and the men stood at attention, all of them by now veterans of the chain gang.

They marched past the train tracks leading around the mountain and into the camp, marched beneath the flashing red neon “vacancy” sign hanging beneath the South guard tower and out of the grounds of the Mountainview Detention and Re-Education Residence, and as they marched, Rizzo led the chant:

Those words kept the men in step. Kept their heads in the game. Kept them unified, a team, comrades in misery and degradation. He never wanted the job but Rizzo had to admit leading the chain was in many ways like leading his warriors on the court. Those years as a baller had prepared him for moving the chain along better than he could have imagined in even his darkest fantasies.

But that was all over now, if it had ever really existed. It’s possible that life was something that had only ever played out in his mind. Right now the chain was the only thing that felt real. The chain and the cold.

Through the forest and down the mountain they marched, past the dorms for the women and the one for the children. Two sets of junior chain gangs filed past them, boys and girls, the oldest no more than thirteen, on their way to an endless day of breaking rocks with sledgehammers and moving the stones and shards out with shovels and wheelbarrows. Because the state and the corporations behind it were generous and kind, children only worked nine-hour days. That generosity did not extend to three full meals per day, ensuring for many of them a stunted growth physically and mentally even if they were to escape the gang through means other than death.

Rizzo pushed these thoughts from his mind, focusing instead on the tale of Swamp Red as he emerged from the bog and enacted revenge against the men who had laid him there.

On an empty stomach the gang marched. The boots rode in transports and sipped coffee. They marched past people staring at them from the windows of their cars or their homes. They saw no one without a barrier between them. The locals knew that when the chain marched through town you kept something between them and you.

A vast field on the outskirts of the town, the gravestones on its edge slowly proliferating. Once it had been an open area the town kids congregated in, away from their parents controlling eyes. Then, in a rare and unrepeatable moment of compassion, the town had allowed some of the land to be used as a burial ground for the homeless and a generational change had been made.

Rizzo watched four kids on the far end of the field—was that basketball they were playing?

Practicing this early, in this cold? Out here in Buttfuck, Nowhere? Rizzo had to nod his head. He watched as the kids stopped what they were doing and peered back at the mass of detainees and guards and transport trucks forming down by the boneyard.

“How many times today am I gonna have to tell you to keep your fucking eyes on your fucking work, detainee?” Detention Officer Shaquile yelled at Rizzo — known more popularly as DO Shitheel by his fans in the chain house.

“Sorry, sir, won’t happen again,” Rizzo said. Another boot unshackled the gang from each other and Rizzo directed some of his guys to help unload their gang’s designated truck.

Four gangs had gathered this morning to spend their shift digging graves for the indigent. One gang connected a series of large heaters to generators and started blasting hot air at the ground; a futile endeavor no doubt, but when trying to break frozen ground even scumbag criminals and air tax evaders needed all the help they could get.

Rizzo helped unload his gang’s master lowering device to lower the casket, metal detectors to find the grave markers, planks of wood to mark the new grave borders. When he was done he helped distribute shovels and pick axes. Rizzo judged they weighed about the same as the M15s the boots wielded. He looked back at the kids by the courtyard. They’d lost interest in the chain gang. One of them threw a hook from twenty feet back. The ball caught air and sailed through the net without hitting the rim.

Rizzo smiled. It was time to get to work. 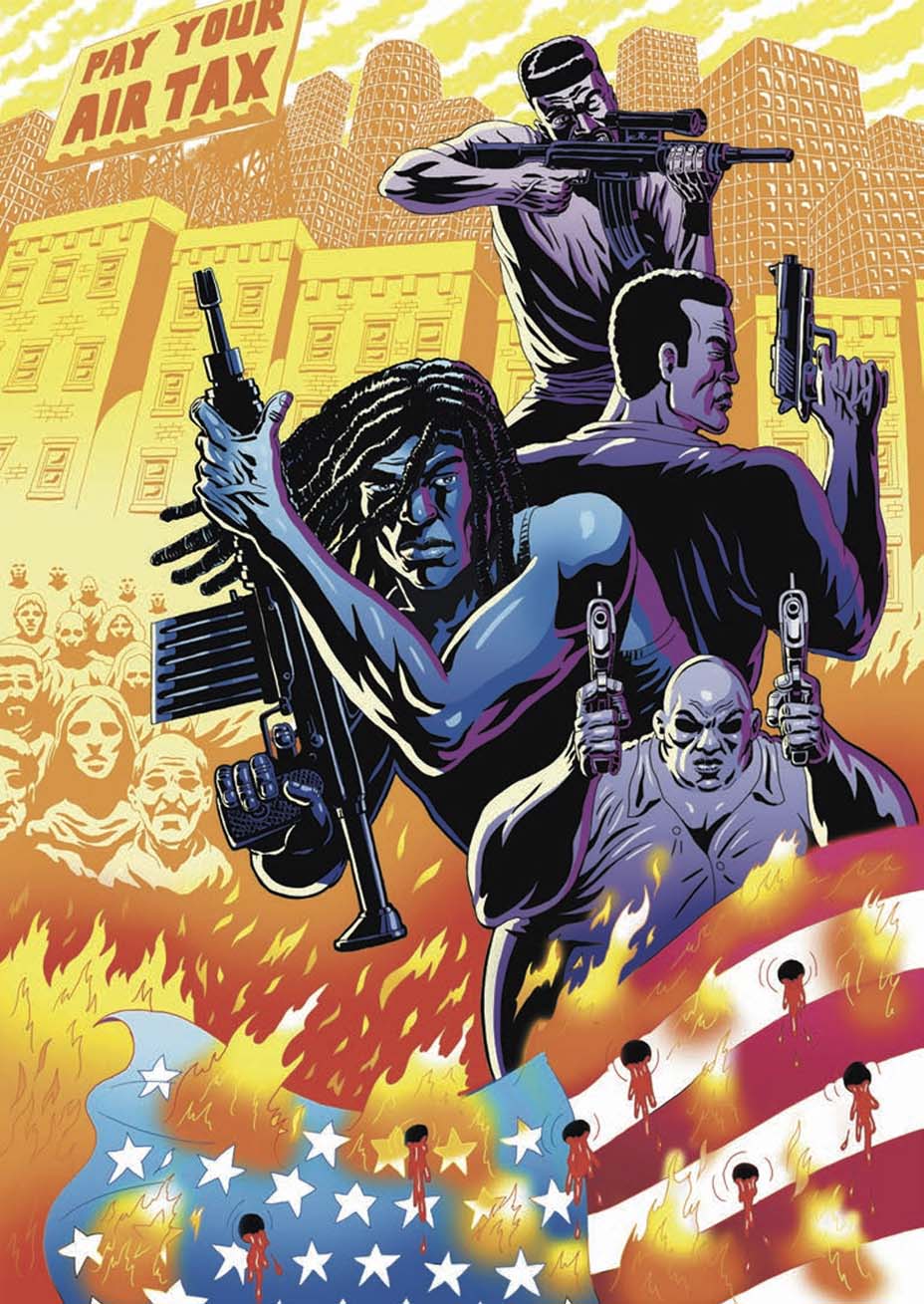 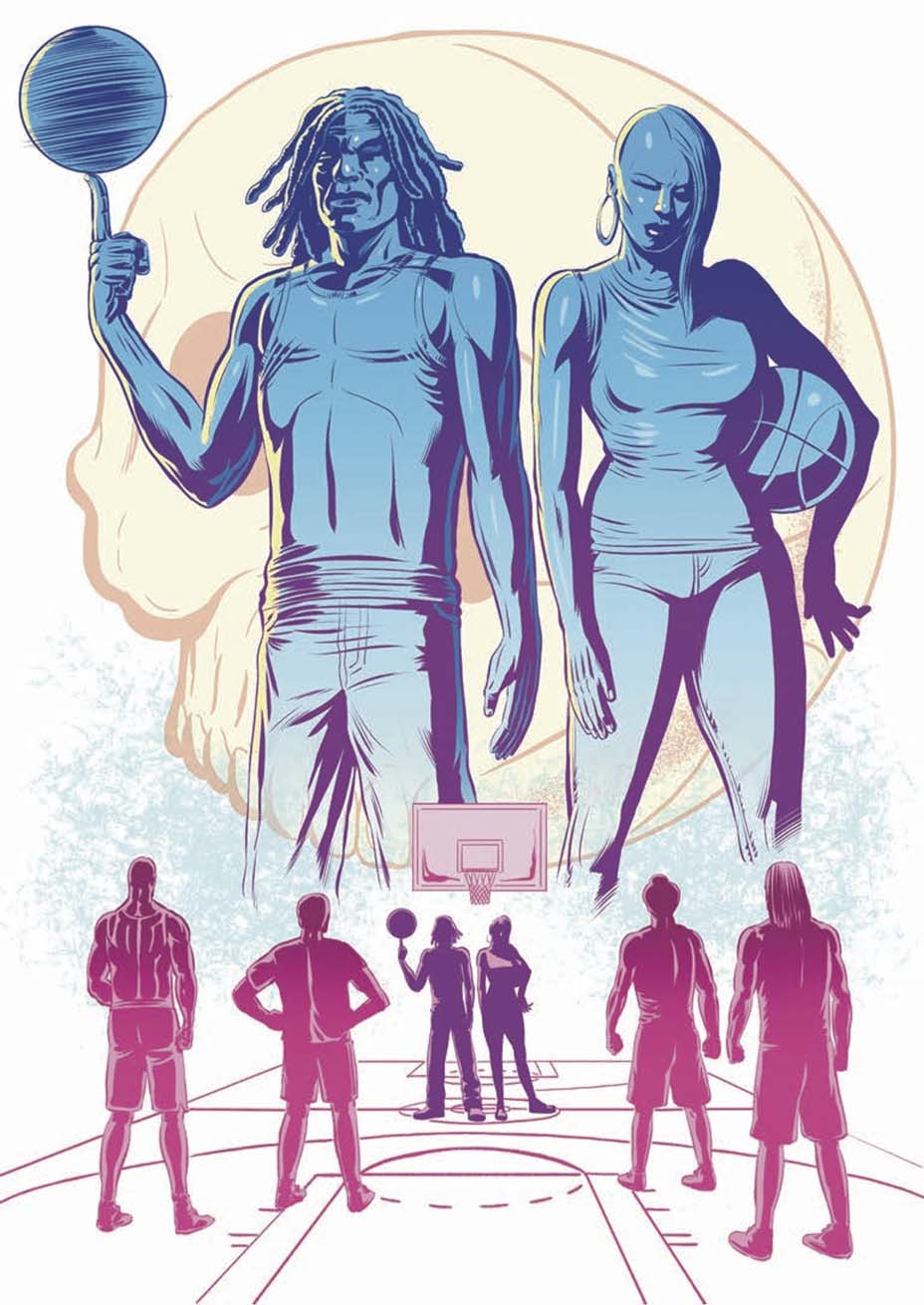 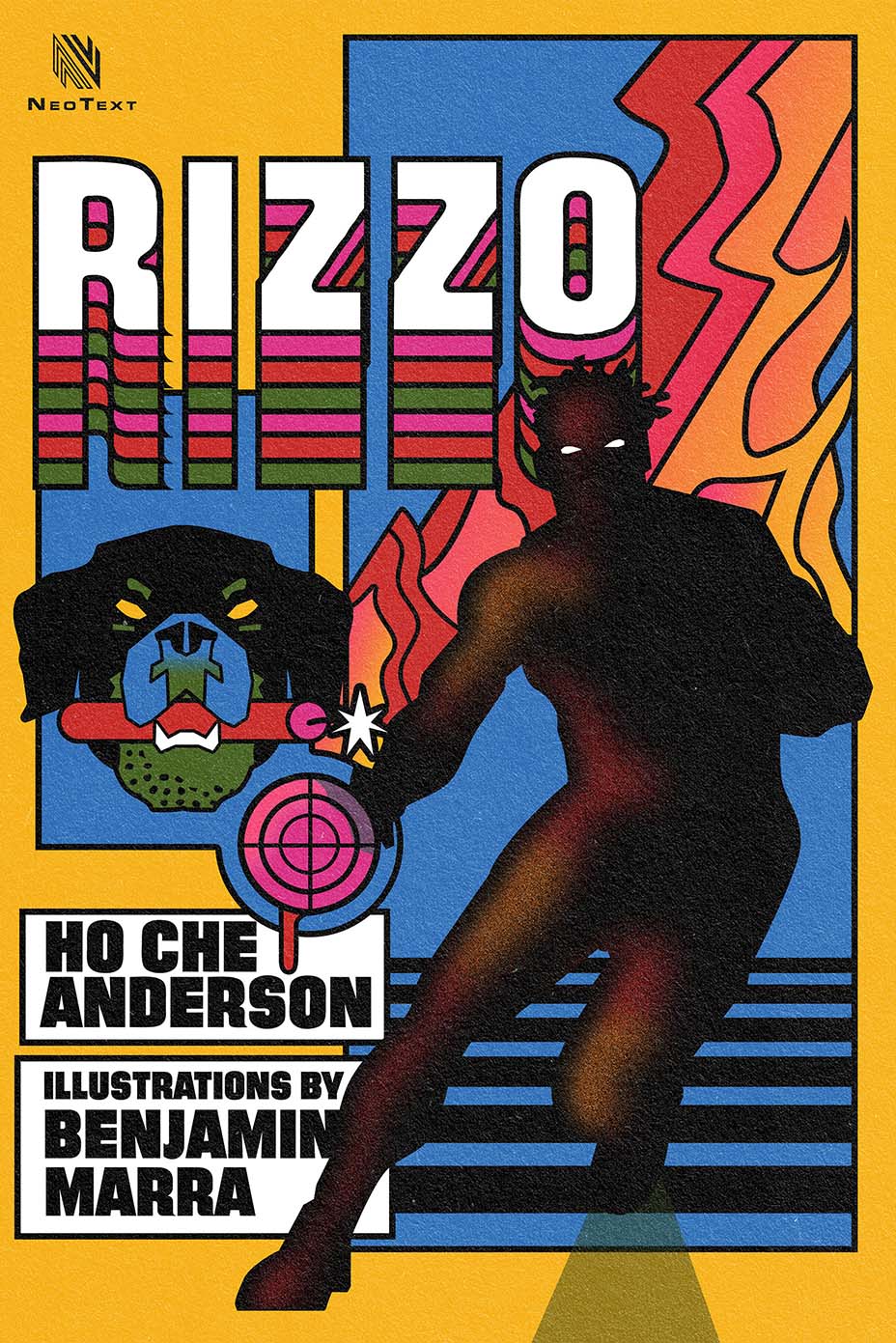