This past summer and for the first time in a few years, I took my two young children, both of whom were born and live in France, to visit our family in New York. We spent much of the holiday bumping around bridge-and-tunnel Queens and New Jersey, but then one day we headed into downtown Manhattan — and, without really planning it, wandered onto the 9/11 Memorial at the site of the original World Trade Center.

After walking around the cavernous man-made waterfalls marking the spots where the Twin Towers once stood, looking at the names of all the victims engraved along the barriers, my kids inevitably started asking me questions. Being too young and having grown up in a foreign country, neither of them had really heard of the Sept. 11 attacks, so they wanted to know what happened, and, more specifically, how.

“They flew the planes into the towers?” my son asked. “Yes, one plane into each tower,” I said. “How did they get the planes?” he continued. “They were passengers and they hijacked them.” “How did they do that?” “They used knives.” “What kind of knives?” “I think they were small utility knives or box cutters.” “So they used knives to take control of the planes, then flew them to New York and crashed them into the towers?” “Yes.” “It sounds like a movie,” he said. “I know. But it really happened.”

It’s been 20 years since Sept. 11, 2001, and it’s still not easy for many of us to explain — whether to ourselves or to our children — the realities that took place that day. For those who were fortunate enough to be far away from Ground Zero, witnessing the events on television, it seemed like a Hollywood disaster scenario come to life in the most terrifying way possible. As the Slovenian philosopher Slavoj Žižek put it in his 2002 collection of post-9/11 essays, Welcome to the Desert of the Real (the title comes from the scene in The Matrix where Morpheus introduces Neo to the real world behind the computerized simulation he’d been living in):

“For the great majority of the public, the WTC explosions were events on the TV screen, and when we watched the oft-repeated shot of frightened people running toward the camera ahead of the giant cloud of dust from the collapsing tower, was not the framing of the shot itself reminiscent of spectacular shots in catastrophe movies, a special effect which outdid all others, since … reality is the best appearance of itself?”

How did Hollywood cope with such a reality in the 9/11 aftermath? During the weeks that followed, its first task was to delay the release of blockbusters like Arnold Schwarzenegger’s Collateral Damage — whose opening sequence featured a terrorist bombing in downtown Los Angeles — so that audiences could better digest the movie industry’s fabricated disasters at a later date. (The delay didn’t make Collateral Damage any more digestible, and the movie would become one of Schwarzenegger’s last big-budget efforts before he successfully ran for governor of California in 2003.)

In the year after the Sept. 11 attacks, two feature-length films that were released, one on television and one in theaters, portrayed the events in drastically different ways.

The two-hour TV documentary 9/11, which aired on CBS in March of 2002, provided a harrowing you-are-there chronicle of Ground Zero as witnessed by two French brothers, filmmakers who were in Tribeca shooting a movie about a rookie NYFD firefighter and then found themselves swept up in a major American catastrophe.

Twenty years later, the footage that Jules and Gédéon Naudet captured, including one of the only shots of the first plane hitting the North Tower, remains a startling time capsule of the destruction that took place on what was expected be an average Tuesday morning in the city. In terms of pure documentary evidence, you can’t find much better, and although some scenes are hard to watch, there’s a light at the end of the tunnel when we learn that both brothers, as well as several firefighters who appear in the film, survived.

The other feature was Spike Lee’s 25th Hour, which was adapted by future Game of Thrones showrunner David Benioff from his own novel and follows the last day of freedom for a convicted drug dealer, played by a particularly downbeat Edward Norton. Initially the film had nothing to do with 9/11, but then the attacks occurred during preproduction and Lee decided to integrate them into his movie, which opens with shots of the massive floodlights that replaced the Twin Towers after they went down.

If the plot itself doesn’t specifically deal with terrorism, focusing instead on how Norton’s character wound up in jail after getting in too deep with the Russian mob, no other film has better grasped the deep despondency that persisted in New York in the wake of the attacks — the sense of loss, of the city and cityscape being forever altered, with New Yorkers trying to find meaning in their changed lives. (Lee’s new documentary NYC Epicenters 9/11 –> 2021½, which aired on HBO in late August, revisits the events of 9/11 in a more direct manner.)

It would take Hollywood a few years after that to pump money into what could be considered the first, and perhaps last, 9/11 blockbuster: Oliver Stone’s epic and bombastic World Trade Center, which, despite a story partly based on real characters, comes across as a rather schmaltzy attempt to portray the disaster from the viewpoint of New York’s firemen, police officers and Port Authority workers.

Stone’s film was released in 2006, a few months before the much more memorable United 93, which found Paul Greengrass applying his visceral docudrama style — something he would perfect the next year in The Bourne Ultimatum — to the true story of the only plane hijacked on Sept. 11 that didn’t reach its intended target, the U.S. Capitol, thanks to a revolt of passengers who knew they were doomed.

There are a handful of other movies and shows depicting the attacks, their planning or their aftermath, some of them quite decent (The Report, the Hulu series The Looming Tower, the TV doc 9/11: The Falling Man), and others, for the most part, indecent (Extremely Loud & Incredibly Close, the Charlie Sheen starrer 9/11). But the events of Sept. 11 were so consequential and generation-defining, their effect on Hollywood stretched beyond mere content, impacting the way blockbusters would be made and experienced in the decades that followed.

On the one hand, and to go back to Žižek’s quote about “a special effect which outdid all others,” there were attempts to re-create the dauntingly real spectacle of the original newscasts, primarily in found footage films like Matt Reeves’ Cloverfield and Josh Trank’s Chronicle — a 2008 monster movie and a 2012 teen superhero movie, respectively — that captured sequences of mass urban destruction through a shaky amateur-style lens. Other disaster flicks, such as Steven Spielberg’s 2005 version of War of the Worlds, were more traditional in design but featured realistic set-pieces that channeled the sense of uncontrollable chaos and helplessness seen at Ground Zero.

Much greater, though, was Hollywood’s shift away from realism toward pure CG spectacle. The first post-9/11 movie based on a comic book character to really hit the jackpot was Sam Raimi’s Spider-Man, which came out in the spring of 2002. The film includes a scene where Times Square is terrorized, explosions causing chunks of buildings to fall on innocent pedestrians. But the fact that the attack was perpetrated by the Green Goblin and his pumpkin bombs obviously made it more palatable for viewers — to the point that Spider-Man would gross $825 million worldwide and set the stage for the Marvel Universe that Hollywood and all of us now live in, for better or worse.

We’ve seen whole cities decimated in The Avengers and in Batman v Superman, to cite two examples, and according to these movies’ prodigious box office takes, we can’t get enough of it. Does watching digitally rendered urban catastrophes, the bigger the better, provide a catharsis for the real destruction we witnessed on 9/11?

Perhaps for some. For others, though, who are still trying to make sense of it all — especially as we approach the event’s 20-year anniversary and find the United States’ major 9/11 foreign policy initiative in Afghanistan having tragically gone to pieces — it might be worth revisiting a movie that tackles the repercussions of Sept. 11 in ways both historical and existential: Kathryn Bigelow’s Zero Dark Thirty, a thriller about the hunt for Osama bin Laden.

At the time of its release in late 2012, the film received generally glowing reviews and performed well in theaters, but was also mired in controversy regarding its factual accuracy, and, some would argue, pro-torture stance. One journalist compared Bigelow to Leni Riefenstahl, and Žižek was among those appalled by the film’s politics. Watching it now, though, Zero Dark Thirty plays like a grippingly long and complex quest to solve an unsolvable problem: America’s place in a post-9/11 world. 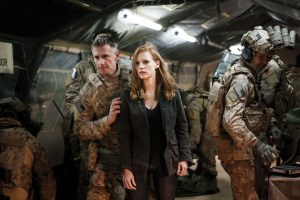 In the movie, Maya, the CIA analyst portrayed by Jessica Chastain who tracks bin Laden for nearly a decade, and the rest of the U.S. intelligence establishment spend billions of dollars and move mountains to reach their target by any means necessary, resorting to torture — during the film’s crude opening section — in order to obtain leads as to the al-Qaida leader’s whereabouts.

When they finally locate him in a compound in northeast Pakistan, Bigelow presents bin Laden’s assassination at the hands of U.S. Navy SEALs as a surgically handled home invasion where parents are murdered in front of their screaming children and the terrorists gunned down like crabs in a barrel. There’s nothing glorious about it: It’s dirty work accomplished efficiently and without any pomp and circumstance — about as far from Riefenstahl as one can get — and it leaves us wondering if it was all worth it, if this one killing will really solve America’s confounding problems abroad.

Zero Dark Thirty begins with chilling audio excerpts taken from calls made on Sept. 11 by people trapped in the Twin Towers or on the hijacked airplanes, setting the stage for Maya’s journey to avenge their deaths and catch the man responsible. It ends with her boarding a military transport plane completely alone, until she breaks down in tears, as if both the magnitude and the futility of her mission accomplished had suddenly hit her. “Where do you want to go?” the pilot asks her, and he seems to be asking the question to all of us. She never answers him.