The game has fueled internet speculation since it was first announced at E3 in 2016. Two years later, Kojima has returned to the annual gaming convention with new footage from the game (which debuted during Sony’s showcase on Monday evening) showing off gorgeous environments, new stars (Lea Seydoux and Lindsay Wagner, joining a cast that already boasts Norman Reedus, Mads Mikkelsen and Guillermo del Toro) and sparking a whole new crop of theories about what exactly the game is all about.

Heat Vision caught up with Kojima on the E3 floor to discuss his new game, the first title to be released under his Kojima Productions banner after he left Konami in 2015, where the director dropped a few hints about Death Stranding, explained how he pulled together the cast and teased an online component to the new game.

It was a big surprise to see Seydoux and Wagner revealed in the latest trailer. You’ve assembled quite the cast for this game. How’d you do it?

First, it was Norman and that was before the plan was solidified and set in stone. I made my mind up on making a game with Norman as the main character. After that, I started thinking of who the heroine should be and Lindsay is a very special person to me since my teenage years. She’s the person that I admire the most. Now I’m 55 and I don’t know how much longer I’ll be active, so before I said I wanted to make something with her. The day after I decided on Norman, I decided I wanted to do something with her.

Lindsay appears as a younger version of herself in the trailer.

Before I had the script solidified, I knew I wanted to have her as a younger version of herself in her 30s. Very early we started doing experiments with how to make her look young in real time. This was one of the challenges. For the other heroine, Lea is an actress I really respect a lot, so I knew it would be a huge honor if she agreed to accept the role. With games like Detroit, The Last of Us, Ghost of Tsushima, its pretty common nowadays to use actors and actresses in games, so it comes down to whether the actor likes what I’m trying to create. I always first try to meet them face to face without an agent in the room, talk about my ideas and establish a relationship with them. For Norman Reedus, Guillermo del Toro is a good friend of mine and he has a close relationship with Norman and he introduced us. For Mads Mikkelsen, a close friend of mine got me in contact with him.

Was it hard to get one of your heroes, Lindsay Wagner, to do the game?

Lindsay knows that in most games there are a lot of guns and a lot of violence; she’s not fond of that concept. Despite that, she agreed to meet me and I was very nervous, very stressed, because she’s such an important person for me. When I started talking with her, I mentioned that I’ve been making games for 30 years, and while most games are about violence and using sticks, guns, etc. to show who’s the best … in my game, while yes you will be able to use sticks, guns, etc., the idea of what I’m trying to making is using a rope to pull everyone together, to tie everyone together. She got very emotional and was very wooed by what I was saying. “Is that something that really can be done?” she said, and was in tears at some point. At that point, she accepted the offer and I was really happy with that outcome.

Guillermo del Toro just won the Oscar for best director and best picture. He clearly has a cinematic eye. This latest Death Stranding trailer was very cinematic. Do you see a blending between the two mediums?

The process is almost the same. The only difference nowadays is if they are interactive or not. When it comes to the fact of controlling, being able to adjust the camera, I think that will keep changing and this will be an element that will increasingly be combined and maybe the line between these two mediums will disappear.

Did Guillermo offer any input on this game’s direction?

Yeah, we talk about this stuff a lot. We’re both creators and creators are very fond of talking about the future. We talk about games, movies, toys, art — we have a lot of things in common. We never run out of things to talk about. 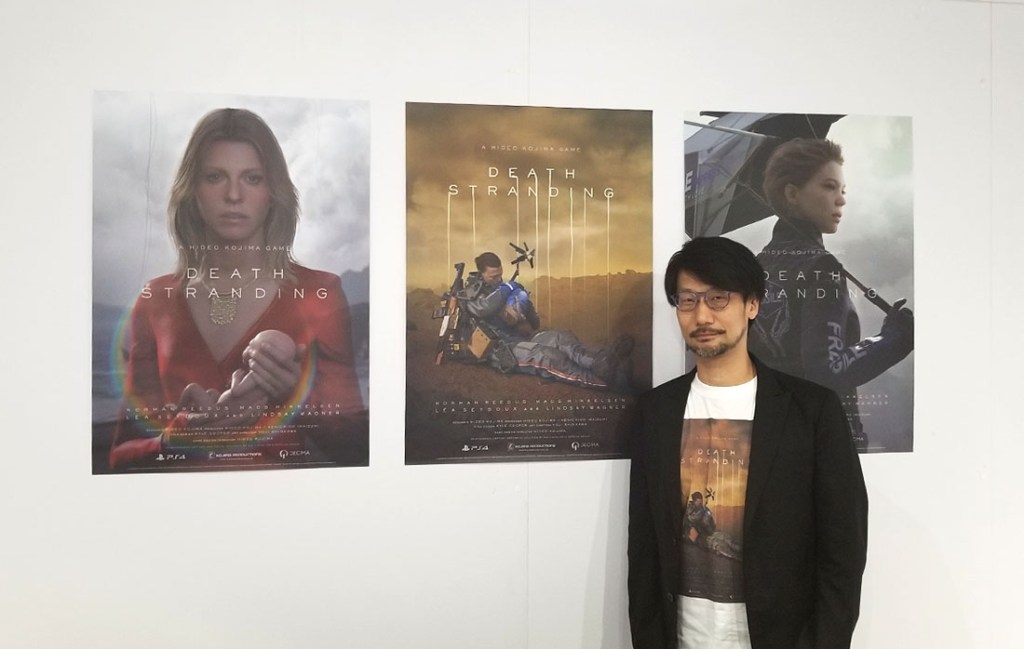 This is the first game under your own production company. Does that offer more freedom or is it more intimidating?

It’s not too different from what I’ve done. It comes down to thinking what I want to make and how to surprise people and how they’ll react. Obviously, it’s a completely different story, but the creative process itself hasn’t changed much. Of course, there’s a lot of pressure because I can’t go wrong on this one.

How do you balance making a satisfying interactive experience and making it cinematic?

First off, games are not movies. The player controls the character, that has to be very clear or else it leads to failure. A game is about the player controlling, going where they want to go, looking at what they want to, and from there, getting to catharsis. That said, unless we were talking about expression, when it comes to audio and visuals, its just a square frame and that’s all the methods you have to express.

The stars in this game have very busy schedules. What’s the benefit of using big-name actors as opposed to lesser-knowns who have much more freedom with their time?

I didn’t consider this factor. For me, it’s a project where I’m putting my life into it. This could be the last game I ever make, which is a concept I take into every game that I make. Since games are digital, we could have gone the route of just rendering the actors, but that’s not fun. We wanted something living, something organic. When you have an actor, you have things that make them unique, each of the freckles, each of their wrinkles. I wanted to make sure you could tell that this person is playing that character. For every character we did performance capture [in different places around the world.] One huge difficulty for us was last year’s SAG-AFTRA strike for video game actors. That had a huge impact on us and the development team.

Do you think there will always be an audience for single-player, narrative-driven games?