With less than a decade of fossil fuel left, there’s only one thing for Big Oil to do: create a time machine to change the course of history and make sure the dinosaurs lived longer in the first place. That’s the hook behind Tankers, one of the first wave of titles from indie publisher Bad Idea, and things only get crazier from that point on.

As might be expected, things don’t necessarily go to plan when Greenleaf Oil sends six contractors, armed with high-tech mech suits, back to the Cretaceous Period to change the trajectory of the meteor that wiped out the dinosaurs, with the aim of guaranteeing another few millennia’s worth of oil. When the contractors return to the present day, they find that human history has been essentially wiped out, and in its place are some super-evolved dinosaurs with a grudge. No wonder Bad Idea describes the series as “a Saturday morning cartoon that’s run irresponsibly overbudget.”

Emmys: The Hollywood Reporter's Critics Break Down the Frontrunners

Tankers is one of Bad Idea’s launch titles, alongside the previously announced ENIAC by Matt Kindt and Doug Braithwaite — a series initially scheduled for earlier this year, before COVID hit. The other titles in the launch line are Whalesville by Kindt and Adam Pollina, a one-off all-ages fantasy in which the son of a whaling captain has to save a community living inside a giant whale; The Lot, a four-issue horror series set in a seemingly haunted studio by Marguerite Bennett and Renato Guedes; and Slay Bells, a black comedy about Santa seeking revenge on a family that accidentally shot Rudolph the Red-Nosed Reindeer, by Zeb Wells and David LaFuente. (The last title, a one-shot release, will be released in July, of course.)

All Bad Idea titles will be available only from the publisher’s “destination store” network — 100 stores and growing — with each issue featuring additional material, including new chapters of The Hero Trade, the publisher’s surprise first launch. No collected editions of the publishers’ series are planned, as per Bad Idea’s operating theory.

The Hollywood Reporter talked to the two-thirds of the creative team of Tankers, Robert Venditti and Juan Jose Ryp about the series, which features colors by Jordie Bellaire.

There’s no getting around it: Tankers sounds absolutely ridiculous in the best way possible. It’s high concept on top of high concept — time traveling mech suits! Living dinosaurs! — and clearly has its tongue firmly in its cheek, too. So, the obvious question: What is wrong with you two? No, wait — I mean, where did this all get started?

Robert Venditti: Talking with Bad Idea, we came up with this concept about oil companies inventing time travel to send soldiers into the past to guarantee more oil in the present. That was it really. Just a few lines. Everyone loved it, and I started building out the story from there. We realized early on that we’d need extra space to fit all the giant concepts and the mech vs. dino action, so we decided to do the series as three oversized issues. That really opened things up for Juan to cut loose.

Juan Jose Ryp: It’s all Robert’s fault! (Laughs.) No, seriously, all the credit is all his — all that originality, all of the teeth, all that “punch” came from Robert. I wish I could lie to you and assign credit to myself for this or that part of Tankers, but I would not be being honest. When the story comes to me, it’s completely finished without needing to be tweaked — at least on my part! I just try to do the best job possible, adjusting to Robert’s ideas.

Robert, I’m curious as to how you handle this concept — there’s obviously some heavy satire at play — “Greenleaf Oil,” I mean, come on — but such things only work when there’s genuine passion or anger fueling it. How are you approaching writing this — and are you prepared for readers to misread it or miss the satirical intent, as has happened in everything from Judge Dredd to Starship Troopers?

Venditti: I’d say it’s more passion than anger. It’d be a bit hypocritical for me to be angry — I fill my car with regular unleaded just like a billion other people around the globe. But I am also passionate about how recklessly we’re treating the natural world. It’s that imperfect balance that really drives the tone of Tankers. As for people misreading the satirical nature of the story, I can’t see how. The Tankers’ mission is absurd on its face, and it’s made even more so by the completely serious manner in which the characters attack it.

Juan, the artwork I’ve seen from the project is phenomenal — at once dynamic and toyetic, and filled with bombast. It feels like you’re throwing everything at the reader in a way that really sets the tone. It looks fun to create, but I’m wondering if you could talk about what’s going into the book from your point of view. Are you purposefully looking to overwhelm the audience in such a sensational way?

Ryp: My intention is to be faithful to the story as it comes to me from Robert. He is a writer who fills the script with nuance and allusions … details that enrich and wonderfully frame the story. I try to follow his lead and punch in his weight class. I would settle for not letting anyone down! Tankers is a crazy, funny story, but it also includes some important and subversive messages. The series has some obvious second readings that I’m trying to underscore with my drawings, too.

The book’s a mini — at least, this series is, which is my question: Is Tankers a finite story with a definitive ending, or does this have franchise potential in your minds?

Venditti: Tankers is a complete story, and we hold nothing in reserve for the next one. There’s definitely franchise potential, though. If there happens to be a next story, we already know what that story will be.

Tankers launches April 2021, with new issues running bi-monthly through August. Look below for some of Ryp’s uncolored art from the first issue. 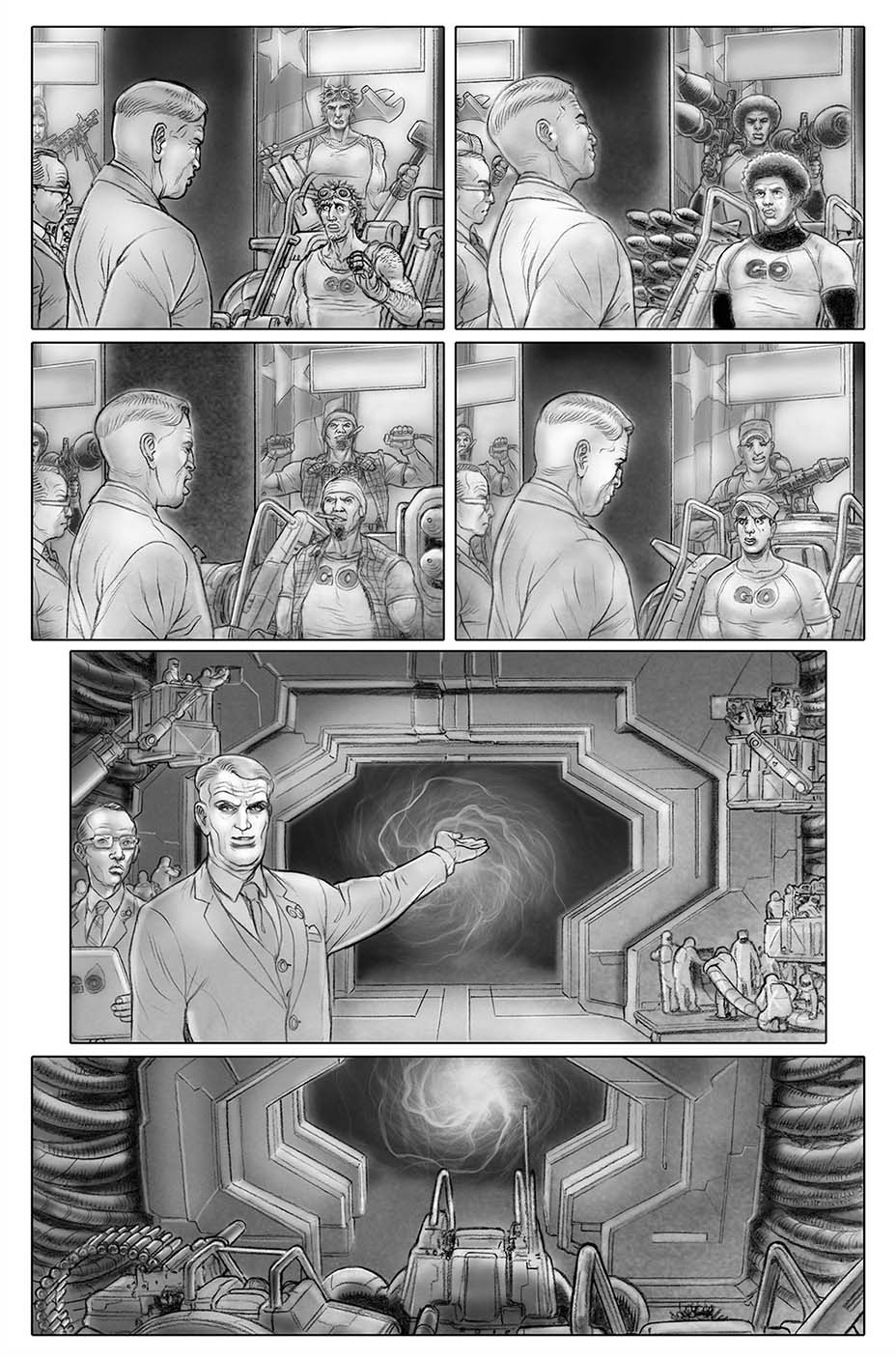 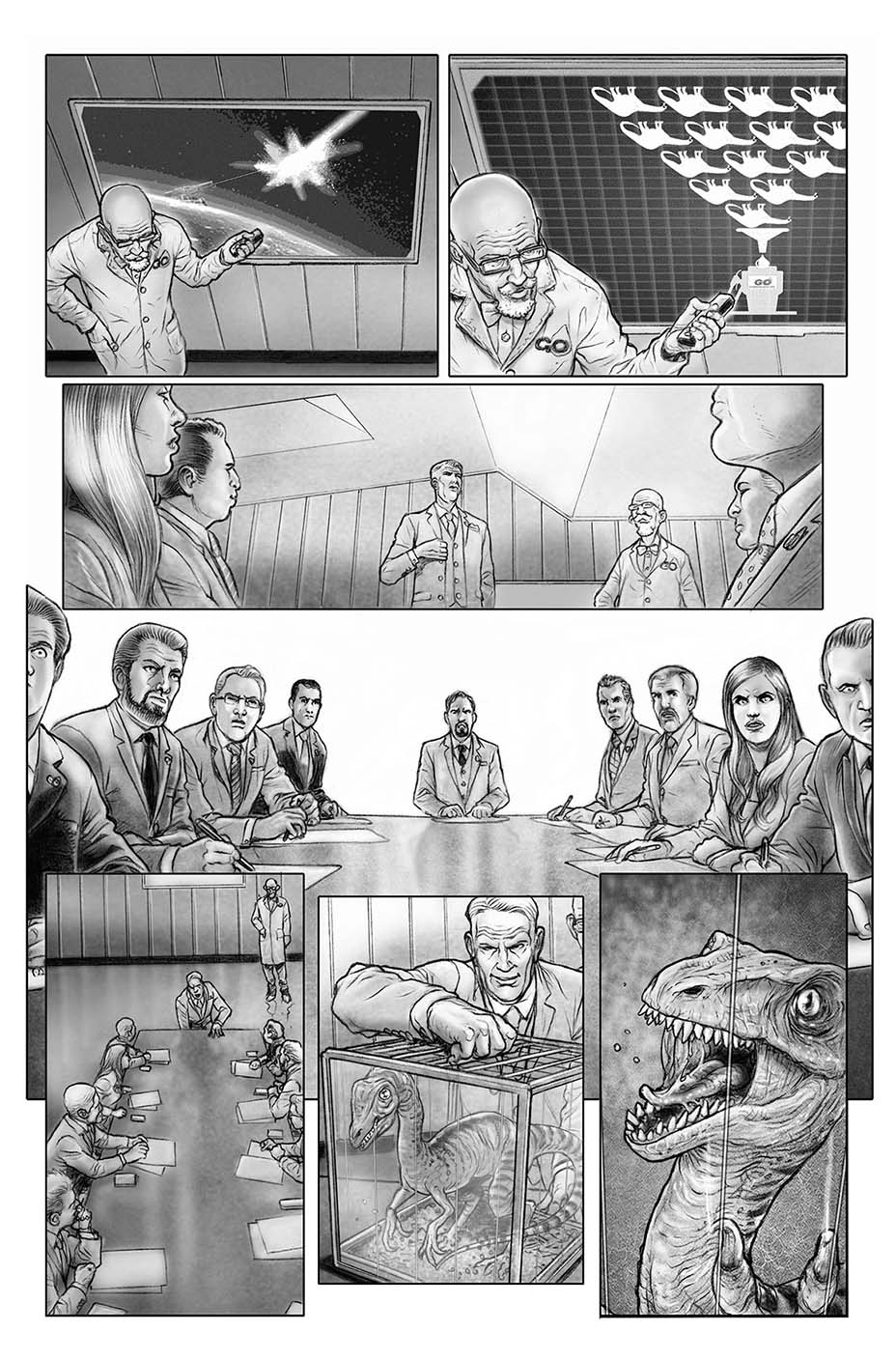 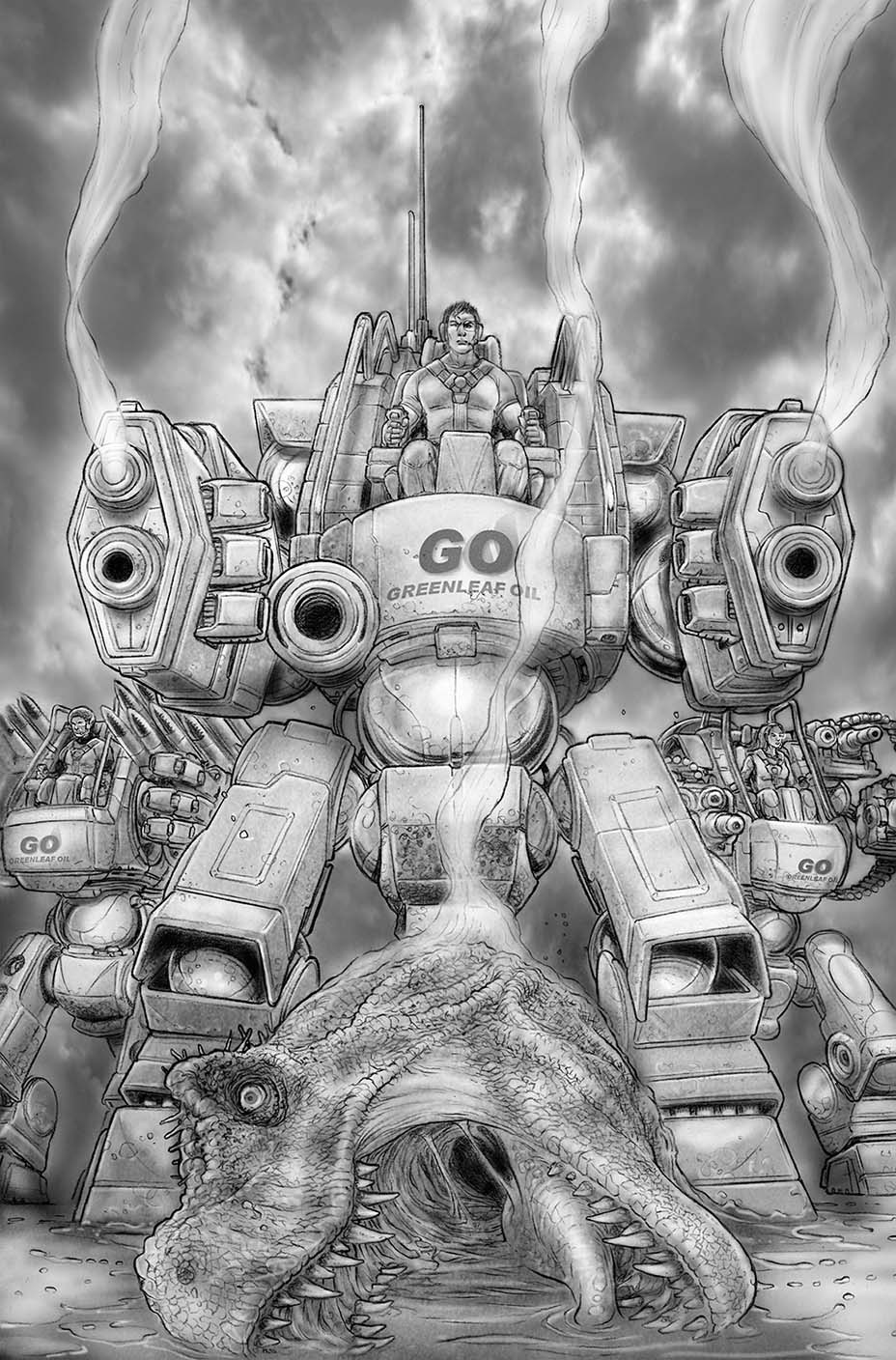 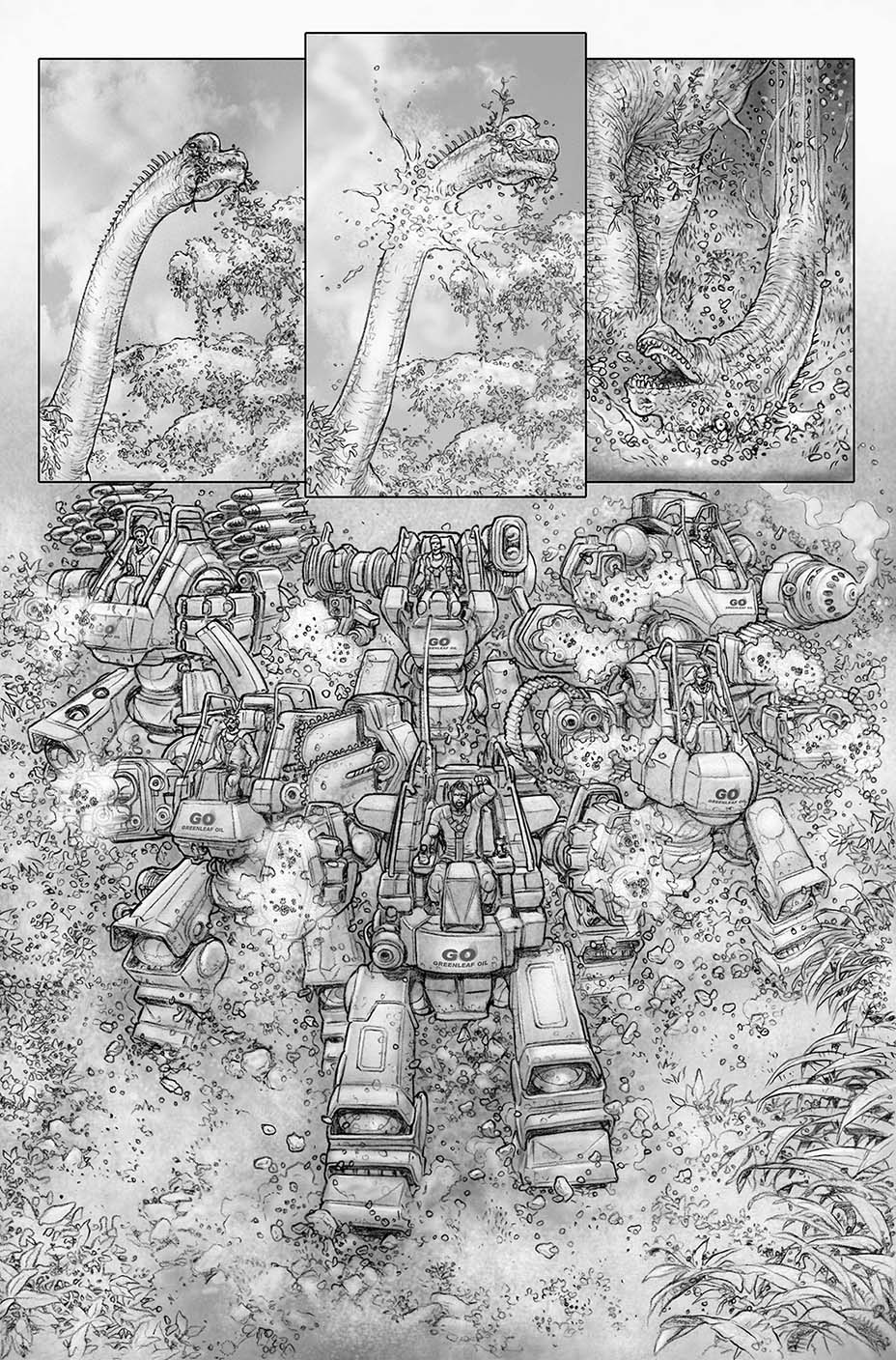 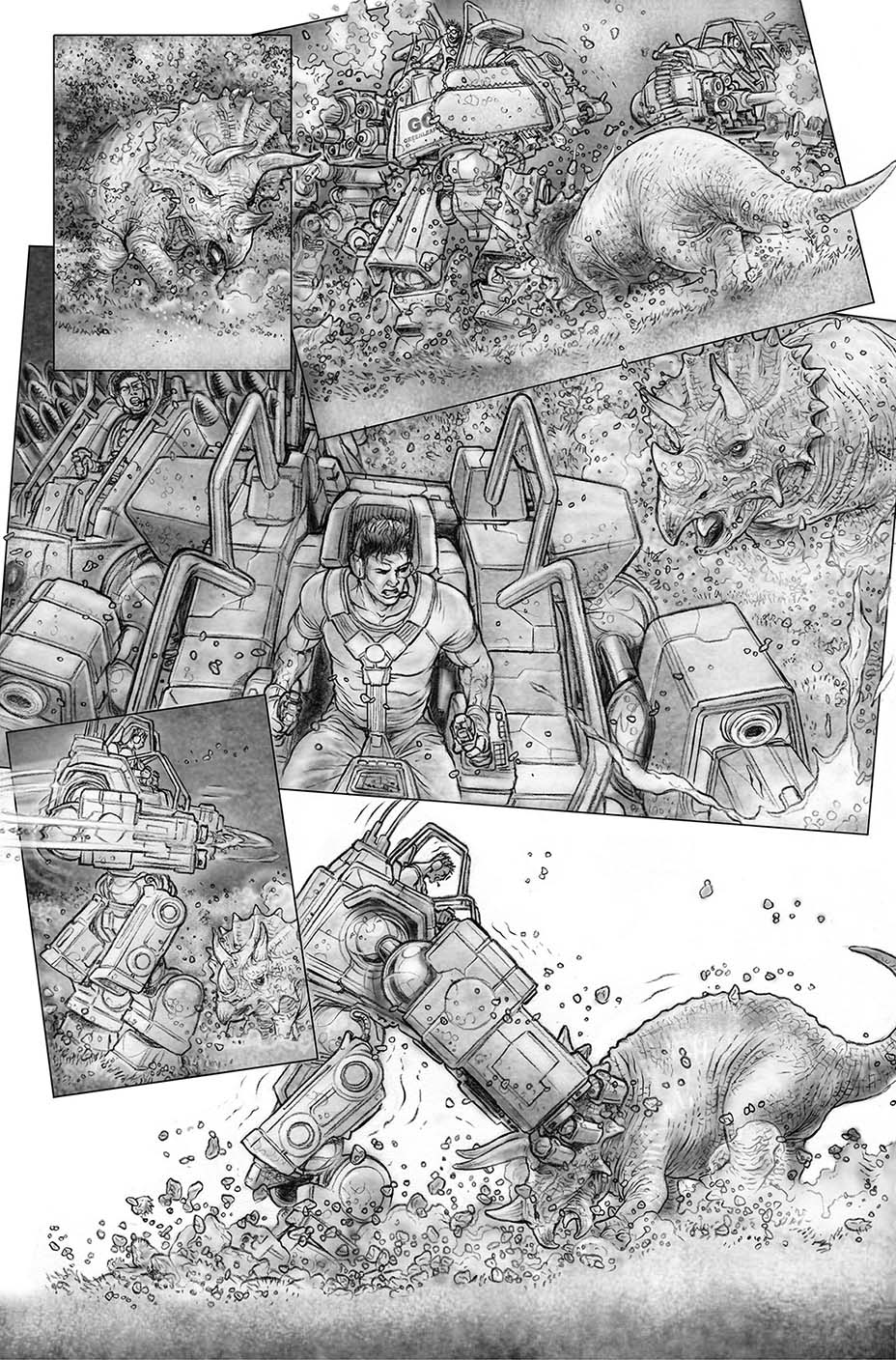