Disney’s live-action remake of Aladdin hits theaters May 24, just a couple months after the relatively underwhelming returns of Tim Burton’s Dumbo ($347 million worldwide) and a couple months before Jon Favreau’s anticipated update of The Lion King. For this one, Guy Ritchie directs a cast that includes Mena Massoud as the title character, Naomi Scott as Jasmine and Will Smith as Genie, a role voiced in the original by the late Robin Williams.

This new version, opening during the busy Memorial Day holiday weekend, uses that cast to tell a story that pulls generously from the original while adding some new elements to give the audience something original. The marketing — posters, trailers, billboards, paid social media buys — has relied heavily on nods to the 1992 animated classic to present the movie as something both familiar and as nostalgic as possible.

Mid-October saw the release of the first teaser poster (from agency BLT Communications), which simply showed the lamp Genie lives in sitting on a pedestal, a faint blue smoke coming out of the end. It’s the latest example of a trend in Disney’s live-action remakes, with the teasers for Cinderella, Beauty and The Beast and others all featuring a single, iconic image to immediately hook the audience.

A much more elaborate poster (from agency LA Associates) came out in March featuring all the main characters along with settings from the story, from the cave the lamp is found in to the city most of the action takes place in to the palace Jasmine lives in and more.

Genie got his own poster in late April showing him looking ready for mischief standing amidst flowing curtains and other luxuries. Aladdin, Jasmine and Jafar got their own character posters (all from entertainment agency BOND) in early May.

All the main characters are set in a plume of blue smoke coming out of Genie’s lamp on the IMAX poster released in early May. For Real 3D’s poster the image shows Aladdin on the run from something in the bazaar, Jasmine close behind him while Genie and the monkey are seen in the foreground, the former looking amused at the hijinks going on. The Dolby Cinemas poster just has Aladdin resting as he suspends himself between two buildings while he checks out the lamp that’s now in his possession. (All also from BOND.)

The first teaser trailer (26.6 million views on YouTube) from mid-October didn’t show much — it just set the stage for the overall look and feel of the movie. There’s nothing seen of the Genie, just a bit of narration about a “diamond in the rough” before we see Aladdin lifting the lamp.

The official trailer (31.1 million views on YouTube), released mid-March, starts off showing Aladdin in the middle of one of his thieving adventures. His skills bring him to the attention of Jafar, who wants the young man to steal something on his behalf in exchange for fabulous wealth. His quest for the lamp unlocks Genie, who is ready to grant him three wishes. With Genie’s help, Aladdin sets out to woo the princess who is a captive in her own kingdom, and much of the second half of the trailer is devoted to various sequences set to the music the audience knows from the original film. 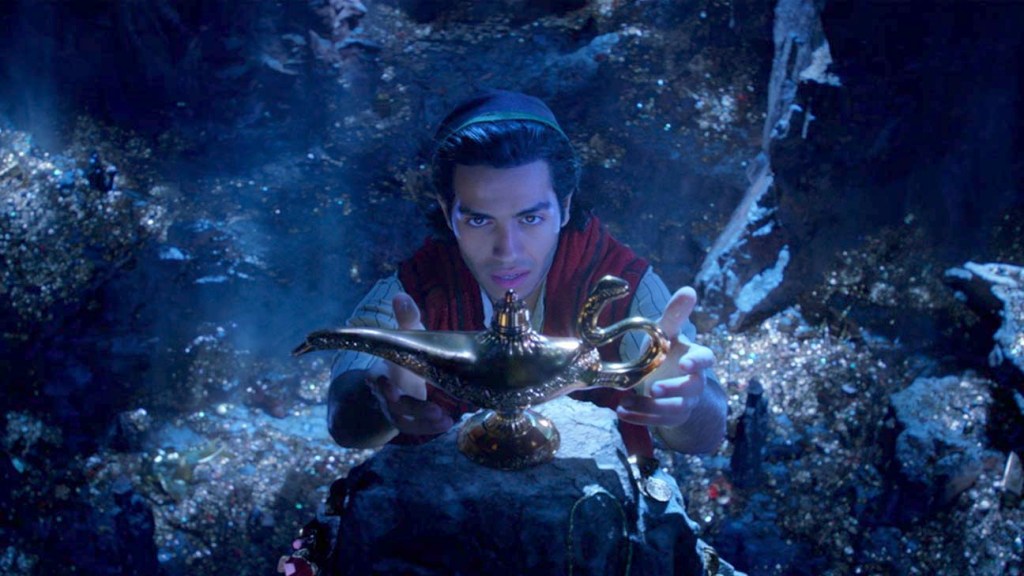 After a global casting call that included more than 2,000 actors and actresses reading for the leads, details about the cast were announced at Disney’s D23 event in 2017. Two years later the studio showed off some early footage featuring Smith at CinemaCon. The movie was also part of the later CineEurope presentation from the studio. Footage shown to CinemaCon 2019 attendees included a clip of Genie singing “Friend Like Me.”

A “Special Look” TV spot aired during February’s broadcast of the Grammy Awards offered a bit more footage, showing Aladdin being prodded to enter the cave by Jafar. The commercial offered the first full look at Smith as Genie at the very end, a look that prompted lots of Twitter speculation about the character’s appearance.

Genie is telling someone Aladdin’s story in a March TV commercial, which is filled with big production numbers and colorful costumes. TV advertising started in earnest in late April with a spot where Genie offers to help Aladdin make a connection with Jasmine and one showing the rags to riches story of the movie. Aladdin had the basics of making wishes explained to him in another commercial, while confidence was the theme of a later spot. The month was capped off when the three stars made an appearance at “The Kids Choice Awards.”

At the end of April, Disney bought a Promoted Trend on Twitter to boost #FriendLikeMe on World Wish Day, offering to make a donation to the Make a Wish Foundation for every post on Twitter and Instagram where someone tags a friend of theirs. Smith explained how that worked in an accompanying video.

Another video used in paid spots on YouTube and social media had Massoud and Smith letting everyone know that as of April 29 tickets were on sale for them to purchase.

A “Special Look” commercial included a snippet of Smith’s version of “A Friend Like Me.” Another, released just days before the movie was to hit theaters, touted the grand splendor and legendary characters audiences would experience. In the midst of all that Disney Music released a full video for “A Whole New World,” performed by ZAYN and Zhavia Ward, a version of the song that plays over the movie’s end credits.

? MAC, which created The Disney Aladdin Collection of cosmetics inspired by the movie and its characters. Those products were used by YouTube beauty vloggers in tutorials on how to get the most out of that makeup.

? Subway, which offered a free movie ticket to those buying a “Fresh Fit for Kids” meal and put movie-related toys and activities in those meals.

? Zales, which created a collection of replicas of the jewelry seen in the movie. That collection was featured in a commercial that included the movie’s production team talking about the details they paid attention to and Zales’ executives offering similar sentiments.

? Skyspace L.A., which offered “magic carpet rides” above Los Angeles in a helicopter.

? Twitter users who added #Aladdin, #Jasmine, #Genie or #MagicLamp to their updates unlocked custom emojis. Movie-themed stickers could be added to iMessage messages. 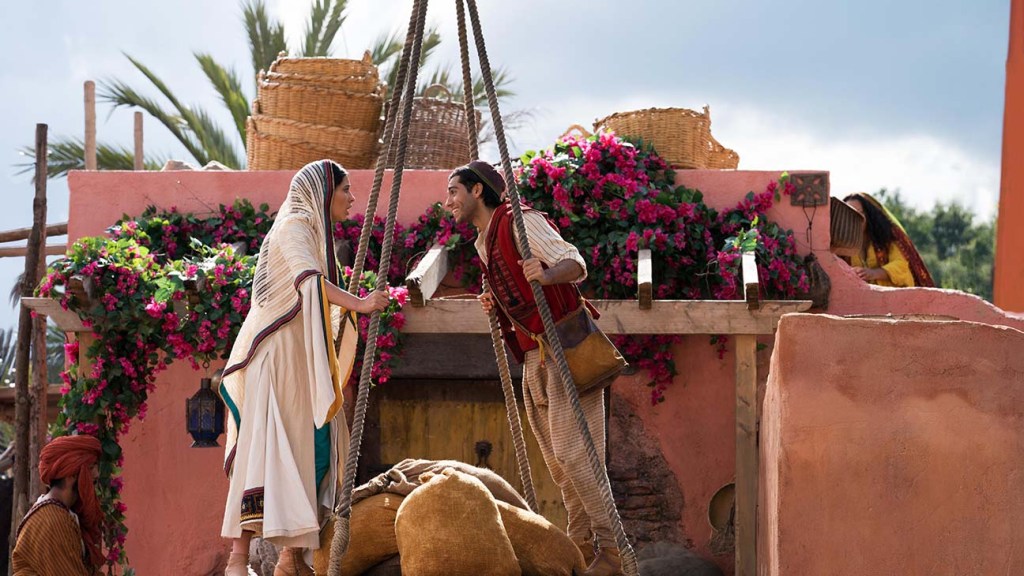 One of the last TV spots released by Disney sums up the studio’s approach and message for the movie, labeling it as the “Biggest Event” audiences would find when they went to the theater. All of the commercials, clips and featurettes have worked to present the stories, characters and settings as existing on a grand scale the likes of which must be experienced on the biggest screen possible.

Almost the entire campaign is rooted in showcasing how the new movie borrows elements from the original animated feature, with only one or two snippets from the featurettes and TV commercials offering anything new. So there’s lots of attention paid to the new takes on classic songs, Smith’s Williams-esque performance as the wish-granting Genie and other moments.

It’s a strategy Disney has employed on other remakes and one that’s on display in the buildup to The Lion King. Early reactions have been mostly positive, and with little else in the way of major releases on the calendar for this weekend it comes down to whether audiences need to see Endgame again or if John Wick 3 will hold better in its second weekend.