The introduction of the Skrulls to the Marvel Cinematic Universe with next year’s Captain Marvel has unleashed a wave of speculation — if not outright expectation — amongst fans that the next big comic book storyline to be adapted for the screen, following Avengers: Infinity War, will be Secret Invasion. If true, this means that it’s time for a wave of paranoia that’ll make the days of “Hail Hydra” look like a walk in the park.

The basic concept of Secret Invasion is a simple one: The Skrulls — a race of shape-shifting aliens that are bent on galactic domination — have a habit of replacing familiar characters in the Marvel Universe with sleeper agents for years, with the intent to take over the various power structures on Earth without anyone even being aware that it’s actually happening.

The dual twists in the eight issue comic book series, which was released to much acclaim in 2008, were that the Skrulls in question were religious extremists who believed they were divinely blessed in their mission, and that multiple heroes begin claiming to have been kidnapped and replaced by Skrulls at various points in the past, essentially resetting relationships (and, in some cases, character deaths) moving forward. For the extent of the storyline — and even in the months leading up to it — it was purposefully unclear which heroes were, or were not, themselves, an intent reflected in the tagline for the series: “Who do you trust?”

Beyond confirmation of the existence of Skrulls in the MCU, it’s not entirely obvious why so many fans have jumped to the conclusion that Secret Invasion will be adapted for the screen. Ignoring the fact that most Marvel Studios projects tend to, essentially, riff on the concepts behind comics, rather than adapt them outright — compare the comic and movie versions of Civil War or Infinity Gauntlet/War as proof — there’s the fact that 2014’s Captain America: The Winter Soldier has offered up a sleeper agent drama for the MCU already; is there really that much more that could be added by making sure that the storyline features aliens this time around?

The answer could be yes. As the comic book version of the story made clear, Secret Invasion, and the idea of an invasion of the superhero body snatchers, allows Marvel to not only undo any plot development it wants — It didn’t really happen! It happened to aliens! — but also to upend existing relationships, alliances and allegiances in the name of melodrama, while gleefully playing with fan expectations. It provides a framework to rewrite history without actually undoing the stories that have previously been read, seen and loved; they still happened, they just happened in a different way, and with different characters than had previously appeared. 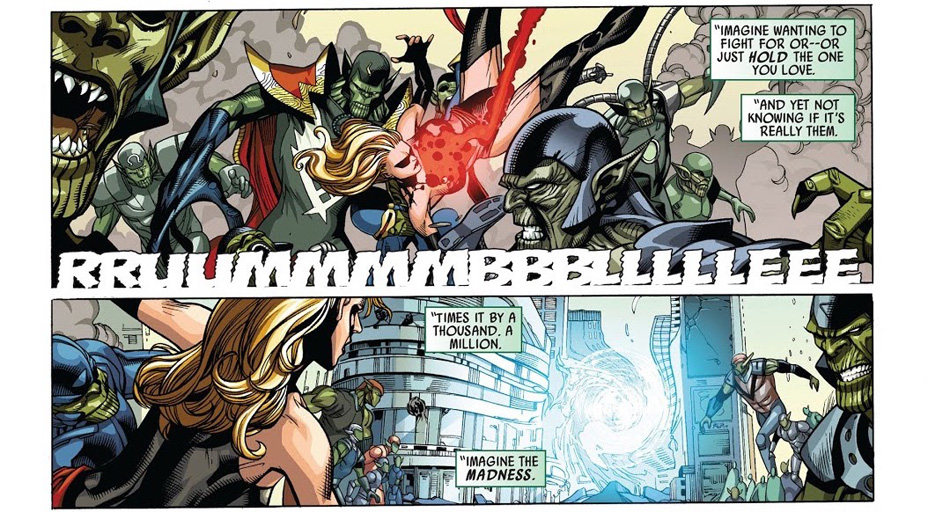 For Marvel Studios, there’s an added, particularly cynical, bonus. Many central characters in the MCU are aging out of use, with Iron Man, Captain America, Thor and others expected to be retired after the follow-up to Avengers: Infinity War. However, what if it was revealed that some of them weren’t actually the real versions of the heroes, and that there are other, more authentic versions (played, of course, by younger and cheaper actors) who have been hidden away until this moment?

Right now, it’s merely speculation that the Skrulls in Captain Marvel mean anything more than pointy-eared villains for that one movie. But then again, as the Secret Invasion comic book taught everyone, perhaps it’s not a bad idea to be a little suspicious, just in case.