An evil laugh at the end of the trailer Star Wars: Rise of Skywalker teases the return of Emperor Palpatine, something that feels fitting for the final chapter of the Skywalker saga and also raises a big question: how?

The answer may be time travel, something that has precedent in Star Wars canon.

To truly understand this theory, and why it actually makes a lot of sense, we have to look back at the final episodes of Star Wars Rebels. The fan-favorite animated series followed Ezra Bridges and a ragtag group of the titular heroes, taking place between the events of the final film in the prequel trilogy (Episode III: Revenge of the Sith) and the first entry of the classic trilogy (Episode IV: A New Hope). As the series wrapped up, the action began to center around an ancient Jedi Temple on the planet of Lothal, which the Empire appeared to have nefarious plans for. As viewers reached the 13th episode, “A World Between Worlds,” the Temple ended being at the core of the series’ largest and most universe-shaking revelation.

Under the Lothal Temple, accessed by an ever-shifting mural of the Mortis family — the Father, the Daughter and the Son, who were first introduced in George Lucas’ original Clone Wars series — was something unlike anything that had ever been seen in the galaxy far, far away. It was a giant portal, which acted as a gateway to any moment or place in the entire universe. As Ezra wandered the infinite paths, voices from the past and present of Star Wars echoed through the space. It was a startlingly moving moment and one that changed everything.

In the words of an Imperial Minister, what was introduced was “a pathway between all space and time … whoever controls it controls the universe.” Ezra proved the power of the portals by pulling Ahsoka Tano out of her time and saving her from almost certain doom in the Malachor Sith Temple. It was a confirmation of not only the power of the mysterious realm but also of the ability to travel through time and space within the Star Wars universe.

So what does any of this have to do with Star Wars: The Rise of Skywalker? Well, the reason that the Empire was interested in the Temple on Lothal was the ability that it would have given the Emperor to control the entire Galaxy, completely. The Emperor and his minions were the few people who knew about the spectacular powers that were buried under the Lothal Temple, and while he was defeated it doesn’t mean that one of his disciples or followers couldn’t have learned about the abilities of the realm and the possibilities of discovering a similar space again.

The Rise of Skywalker filmmaker J.J. Abrams has talked about how he wants this entry into the series to unite the three trilogies, and with the instantly recognizable cackle of Palpatine and the arrival of actor Ian McDiarmid onstage after the trailer first played at Star Wars Celebration, it seems to confirm that the ultimate evil from has once again returned. But, of course, fans who have watched Star Wars were wondering how, and the events of “A World Between Worlds” seem to hint at an answer to that burning question.

Does 'Star Wars: The Rise of Skywalker' Title Refer to Rey? 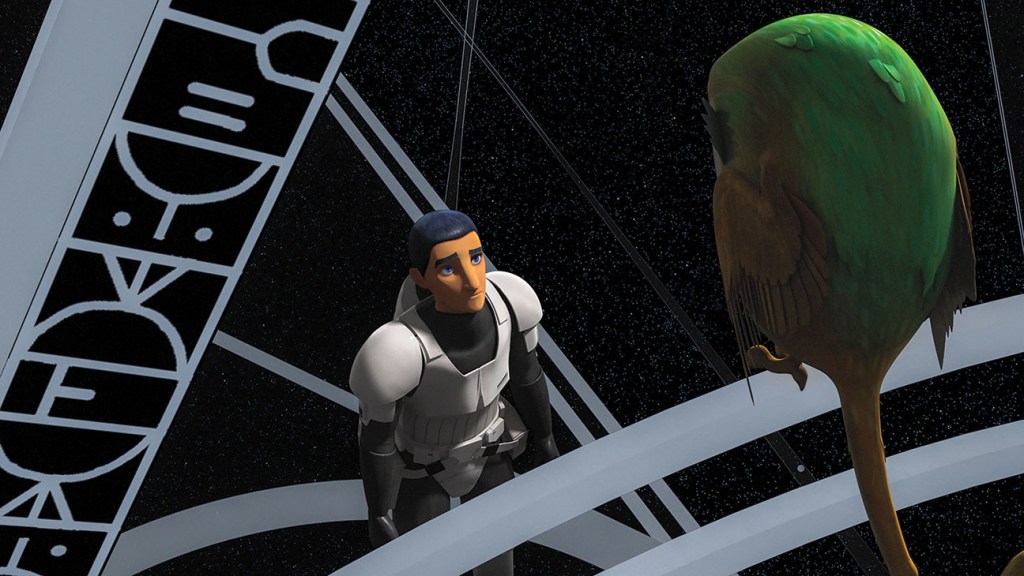 It wouldn’t take much for The Rise of Skywalker to introduce the concept into the canon of the films, and there’s precedent for the animated world testing the boundaries of the galaxy before concepts are directly introduced into the films. Luke’s much-debated Force projection in The Last Jedi was actually already established in another Lothal-centric episode of Rebels during season two’s “Shroud of Darkness,” which saw Yoda project into the Temple from his cozy swamp on Dagobah. Another controversial The Last Jedi moment, Leia’s Force flight, had also been seen in cartoon form as Mother Talzin utilized Force levitation during The Clone Wars.

From the brief glimpse that fans got of Star Wars: The Rise of Skywalker, it seems like there will be plenty of planet hopping and some kind of search which sees our heroes venturing across the galaxy. The Force Awakens introduced the importance of relics, something that was highlighted by Kylo Ren and his connection to Vader’s helmet. But the real question is … where did he get it? The Star Wars cartoons and comics have focused heavily on the lore and mythology of the objects and spaces within the universe, so maybe that’s something that can be brought to the big screen.

The reason that arc is vital is that if the Resistance is looking for something vital to their future, and we know that at some point Kylo searched for an object that was key to his past, it’s likely that there’s a culture and economy based on Force relics. That means it’s also very reasonable that someone somewhere knows about the Lothal Temple, its magical mural and its secret. If that trade exists, just as it does in the non-cinematic world, then all it would take is one disciple of the Sith — perhaps Kylo’s old cohorts in the Knights of Ren — to discover the possibilities of the Jedi temples and harness them in an attempt to restore the Emperor to his former power.

It could explain McDiarmid’s return, as well as offering up a way to say goodbye to some of the series’ long-lost characters in a way that differs slightly from the Force Ghosts that fans have come to expect from the Star Wars spirit world. Whatever happens, we’ll have to wait until December to find out just how the Emperor will end up back onscreen, wreaking havoc once again on the galaxy far, far away.