Five years ago, Don’t Breathe star Stephen Lang unveiled The Blind Man, a terrifying villain who terrorized a group of young people who break into his house and discover darker secrets than they could have imagined. The project earned a massive $157 million globally on a $10 million budget, and almost immediately, director Fede Alvarez and his co-writer Rodo Sayagues started talking about sequel ideas.

Soon they pitched Lang the premise of The Blind Man becoming the central figure in the sequel, and the actor approved of the creative decision right away. When production got underway in Serbia amid COVID last year, Lang pushed to show the character’s weaknesses, not just the strengths, as he protects a young girl, Phoenix (Madelyn Grace), from home invaders.

When the premise was unveiled of The Blind Man becoming the protagonist, it was met with controversy, with critics questioning if the character should be seen in a heroic light after his crimes in the first film. Yet Lang believes the production handled it with care. “No one is truly a lost soul,” the actor tells The Hollywood Reporter.

In a conversation with THR, the actor also breaks down his most challenging scene, looks at the ending confession and also delves into the possibilities of more Blind Man in his future: “I never say goodbye to my characters.”

Before filming this, you spent time in quarantine educating your small grandchildren. Did that prepare you to work with a young actor on this role?

I think it did. I certainly do enjoy relating to real young kids at this point, just having reached a certain age myself. They fill you with hope and the last year or so was such a difficult time for everyone that any place you could look for some inspiration and for some hope and some good vibes, that’s good place to go.

Talking to other actors who have worked with children, they enjoy how kids give different types performances. They aren’t schooled, necessarily. Did you learn anything from her?

I did. I was filled with admiration for her, truly, because she has ice water running through her veins. We were on difficult sets. They were dark, they were dank. They were somewhat dangerous. A lot of sharp edges. Stuff like that. Madelyn just brings her own sense of serenity and joy with her. When the director would say action, she was right there. When the director said cut, she was Madeline again. It’s a great gift.  I loved talking with her about the scenes. Massaging scenes. And of course, Rodo did it with her all the time. She’s very, very responsive to that. She was very capable of shaping the nuances of the scenes and it ended up being quite a lovely performance. 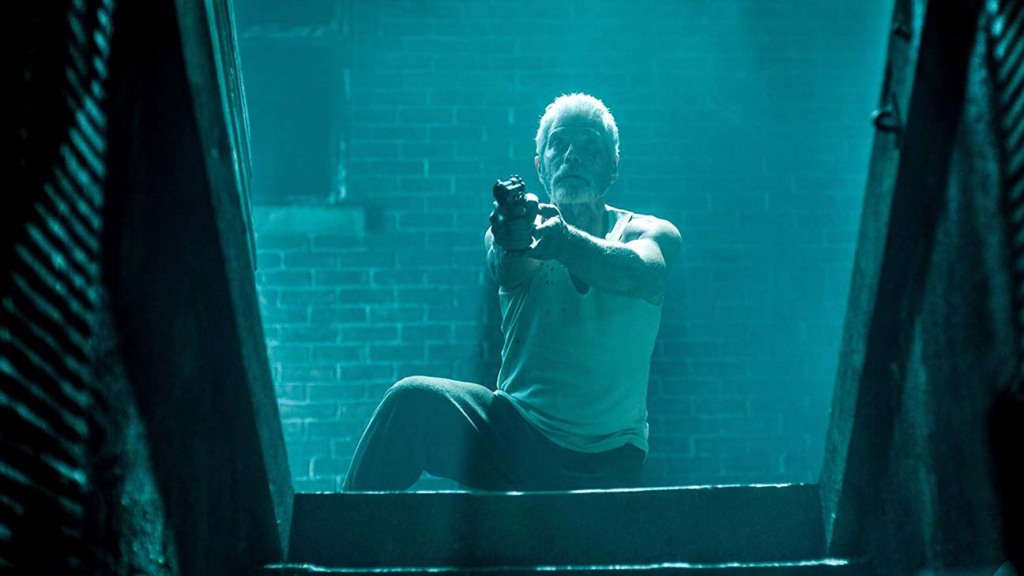 Fede and Rodo have talked about this movie for a long time. How many versions of the script you read? Or did they present it to you when it’s finally done?

We had lunch, probably in 2017 or ’18. They talked about the concept of it. I thought, “Great, write it! I’m down. I like it.” When Fede gave it to me, probably a year later, it was kind of intact. At that point it seemed in pretty good shape. I don’t know what notes were being given from other avenues. I will say that after the success of [Don’t Breathe] — there were certain aspects of the first film that some quarters were kind of anxious they be removed and Fede insisted it not be removed. A certain level of trust had been established among all the parties at this point. Having said that, it just takes awhile to get going. What I filmed a year ago is bares a great resemblance to what I read two or three years ago, for sure.

What are you looking for when you read the script?

You are wearing tank-tops, showing off your arms. Do you just stay in that shape or do you work out hard for something like this?

I work out hard, but there are gradations. For this one, I wanted him to be sinewy and gnarly. I wanted “old man strength.” But equally vital to me was the vulnerabilities and the weaknesses. I wanted there to be a certain hollowness in his chest, which I think there is. His weakness was every bit as important to the playing of this character as his strength is. He is alternately both. He’s going to live because he has the instinct to survive but that doesn’t mean he’s going to thrive. That’s a big difference between this one and preparation for the first one, which had to do with getting in ass-kicking shape.

How many dogs did you work with?

I think there were a total of three. I could never remember which dog I was working with, because I can’t see anything anyway. We worked with three dogs and couple of dog corpses — not real dogs. No dogs were hurt! I promise you.

I remember lying in the puddle, as you call it. It felt like I was lying in a swamp. I remember calling the AD over and saying, “Do you think you could move things along? Would that be possible? I’m just lying here dude.” (Laughs.) It’s uncomfortable, but that’s the name of the game, hoss. It all contributes to the general atmosphere of the whole deal.

What is life like while you are shooting this in Serbia? Are you alone and brooding in a hotel room, or did you have family with you?

My life in Serbia was from the hotel to the set and back. I have a good assistant who travels with me, who can take care of all kinds of stuff. It’s important because I forget stuff all the time. He’s on it. My family did not come because of the pandemic. They wouldn’t have been allowed. I got out very rarely. But they had it all set up well for me. I had a private gym in my hotel suite. If I wasn’t shooting I was working out or sleeping. Shut up and do the movie. I did get out because I wanted to go to Marshal Tito’s tomb. I’ve always had this respect and fascination for Tito. I like anybody who bucks Joseph Stalin. I had photographs of that.

In this movie, The Blind Man acknowledges his sins, which was surprising. How did you decide to play that level of introspection?

It was certainly a discussion, not a point of contention, but a discussion, between Fede, Rodo and myself. That is conveying the truth of this film, of the character. I welcomed it. He has locked away so much. He would be the first to admit he is a monster, if he was admitting anything. But he’s not admitting it most of the time, because it’s locked. It’s as inaccessible as that box in the basement. It’s not useful for survival to go there. And then at the end, when things are slipping away from him, he has the epiphany as the end approaches. And she allows it. She makes it possible for him. She forgives him. I tend to see this film in cosmic and mythic terms, but I do understand that in Christianity, redemption is possible until the last possible moment. No one is truly a lost soul, which is one of the reasons I find some of the controversy about him, “Is he allowed to do this? Can he behave in a heroic fashion?” — I find it strange. I want to say, “Well, you’re not a very good Christian if that’s what you feel.” (Laughs.) Because up until the last moment, salvation is possible, just by asking for it. Now — I don’t want to go there. This is not a Judeo-Christian kind of movie. But Phoenix, our mythic Phoenix, she forgives him and she tells him he’s her father and that she loves him. That unlocks it for him. 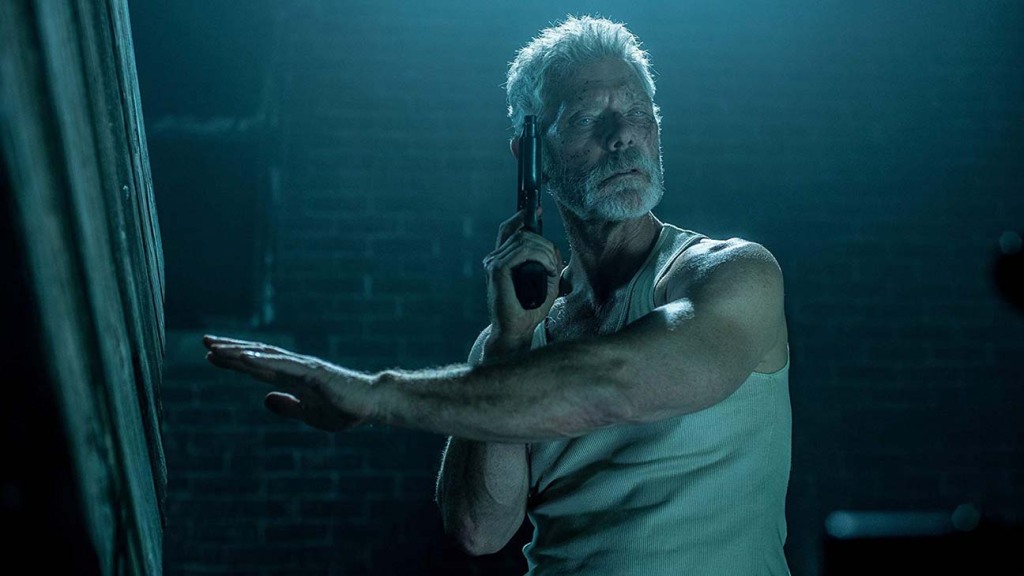 Was that a moment you knew would be a challenge?

It was one of many. We might have shot that the same day I gouged the guy’s eyeballs. You tell me which one is cooler. Listen, it’s all a day at the office.

When you are working with Rodo or with James Cameron on Avatar, how do you know you’ve given them what they want. Do they tell you in different ways?

Cameron will kind of snap something or go “I’m good. You need another? Because I’m good.” Usually there have been 18 or 22 takes at this point. (Laughs.) Rodo is his own version of that. He’ll go, “I don’t know if we can do better than that. Do you want to do another?” I’ll go, “No, let’s move on.” If I need another I ask.

Was there a sequence that when you read it, you knew “this is going to be quite a challenge.”

The water. I read that and that clearly was a show piece. I began to think of it as my Esther Williams water ballet kind of deal. The way they set that up and the way they shot it was so artful. When I was reading it, I wasn’t sure how we were going to do it. I wasn’t quite sure that I even was buying in when I first read it. Not only did it work, it’s one of my favorite, if not my favorite sequence, in the film. The lighting and where the camera is, the shot selection, editing, everything in that scene really turns me on. I think it’s really cool.

Did you have any contact with producer Sam Raimi?

No, but I know he digs the film. I’m a great admirer of Sam, but I’m not sure he did us any favors when he said, “This is the greatest sequel I’ve ever read in my life.” (Laughs.) I’m going, “Now we’re screwed.”

Way to raise the expectations!

Exactly. I take him at his word and I hope he still fills that way. I’m pleased to be associated with him, because he’s made his share of really terrific movies.

Are you prepared to say goodbye to this character? There’s always a chance of more, right?

I never say goodbye to my characters. You close the script and you put the script up on the shelf where they are all lined up and you kind of keep it in your heart and see where the chips fall down. They are doing three new Exorcist films with my dear friend Ellen Burstyn. She did it in ’72. God bless it. So never say never. About 25 years from now when I’m starting to get old, I’ll definitely be ready to do the Blind Man again, to resurrect him.