“You are feared by the worst evil in the world: Hell. All of hell fears you.”

Those words were uttered by DOOM Eternal game director Hugo Martin, who describes the demon slayer in the upcoming first-person shooter game as an “uncompromising” character. “That’s what makes him so appealing,” he tells The Hollywood Reporter on Friday, midway through a media-only demonstration of the game by publisher Bethesda Softworks. “I think we would all aspire to be so uncompromising and direct; he’s not rude, but he doesn’t have to be polite.”

Martin, who played classic games like Freeway and Kaboom! as a kid, before moving onto Goldeneye in college, studied automotive design early in his career and worked in advertising, film and animation prior to dedicating himself to games.

He describes himself as a “big film buff” in addition to the more predictable label of “hardcore gamer,” telling THR that he drew inspiration for DOOM Eternal from the charm of 1987’s Evil Dead 2. “That was a big touchstone for us, when you look at something like that, there’s the perfect balance between gore and slapstick humor. It’s not really taking itself too seriously.”

Noting that the Evil Dead franchise became what it is with its second installment, Martin declares, “I think this our Evil Dead 2.” 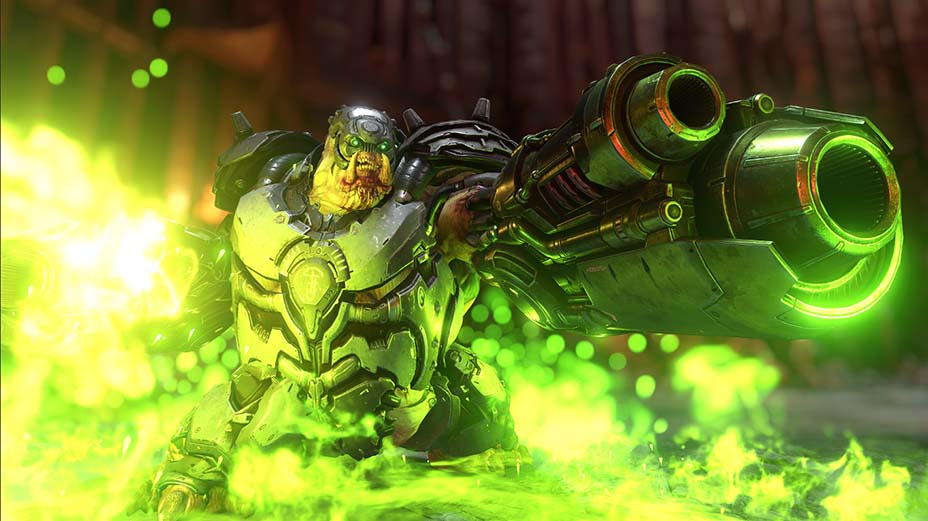 He goes on to mention well-known pop culture characters such as the Terminator and serial killer e from the Halloween franchise, or simply “a character who’s not a jerk, but doesn’t really give a shit,” as references that spoke to the kind of confidence he was looking for the doom slayer to embody.

And when the goal is to make a difficult jump, then twist and turn to land another move immediately after, while being hit with fiery balls and maintaining aim on the target in front, an endless supply of courage and self-assurance is indeed necessary.

Players familiar with the long-running franchise — this title is a direct sequel to 2016’s DOOM — will not be surprised that the game thrusts players into a fast-paced environment that resembles a slick zombie slasher film and requires mastering the skill of stealth to not get repeatedly beaten down by the various enemies within.

Amidst the action, which offers a steep challenge even at the “easiest” difficulty mode, cut scenes are incorporated seamlessly, with the world and characters opening up to share the very detailed lore. If academically inclined, you can read every page. If not, you can simply move on.

The basic premise of DOOM Eternal, which sees an ancient warrior battling demonic forces of hell, is “ridiculous,” according to Martin, yet he clarifies that the game is executed with sincerity. “Everything is done with a wink and a smile,” he says. “So I’d say it’s more mischief and less malice.”

Noting that the game is hyper-violent, Martin explains that the doom slayer is never tasked with killing people; only demons. “I have kids, and if it was anything but that, I really feel like it would get disturbing,” he says, adding that there is no nudity or cursing involved.

Throughout the game development, Martin was conscious about ensuring the violence was there for a reason. “Every action that the player takes has a purpose, for example using the sticky bomb to take out the weak points,” he shares. “What we do is we think of the guns like tools, and the demons and the situation you’re in is like the problem. You want to use the right tool for the right job.”

Of the enemies, which are plentiful and full of attitude, Martin explains that certain creatures are more vulnerable to certain weapons in order to motivate the player to weapon switch more often. “[There is a] higher risk reward with weapons, so [for example] the rocket launcher is stronger, but shoots slower and does more self-damage, so we want you to respect the powerful weapons and keep the resources low, so that you always have to be considerate with every shot you take,” he says.

There are fun elements incorporated into the action, such as when you do the glory kills to the Cacodemon, a “balloon sound” occurs when you pull his eye out. “It’s all meant to be in good fun,” Martin emphasizes. “It has that Saturday morning cartoon vibe to it.”

Recognizing that the video game industry is still in its infancy (only 50 years old), Martin expresses awe at the scale of games such as [upcoming] Cyberpunk 2077 and [2018 release ] God of War that have “fully realized universes in them with characters and story and mechanics.”

Comparing the engaging experience of playing a game of this magnitude to a sci-fi epic like Blade Runner, Martin knows that he could either watch that film for two hours, or be in [the world of] Blade Runner for 200 hours. As a creative person, the latter is something he cannot pass up.

Looking ahead to the next phase of games, Martin concludes, “I look to the future of all the amazing games that are coming out, and I just think it’s a really exciting time to be a developer and a gamer.”