The director behind films including Moon, Source Code, Warcraft and Mute posted a teaser video in which he ponders what the subject of his next film should be in a rhyming-poem format.

“One for them or one for me? Studio or wee indie?” he says in voiceover as viewers see Jones with his back turned to the camera watching a couple of monitors. “Shall I make a comic book movie, a Marvel film, perhaps DC? Image, or Dark Horse maybe?”

After some more pondering, he concludes, “Yes, one from the Megaverse, now let me see. Who, oh, who, should it be?” as he takes off his hat to reveal a blue mohawk, similar to that worn by Rogue in the comic book series. The screen fades to black as the words “If that’s not enough of a clue….” appears.

He followed that up Monday with a tweet confirming this is his next project.

So who is Rogue Trooper?

“Zarjaz New Future War Story!” ran the banner across the top of the cover for the 228th issue of British comic anthology 2000 AD, teasing the arrival of Rogue Trooper. “Zarjaz” was a word that only made sense to the 2000 AD faithful — it meant “excellent” in the alienspeak of the comic’s mythology — but it wasn’t incorrectly used in this context; from that first seven-page installment in 1981, the future war dynamics of Rogue Trooper captured the hearts and minds of the target audience for the comic, and launched a property that continues to this day.

Co-created by Watchmen’s Dave Gibbons and writer Gerry Finley-Day, the high concept behind Rogue Trooper is remarkably simple: An ongoing war between two human factions — the Norts and the Southers; the Civil War references weren’t particularly subtle, although to all intents and purposes the Norts are essentially space Nazis — has become centered on Nu Earth, a planet so destroyed by the conflict that soldiers can only survive with the assistance of breathing apparatus and “chemsuit” armor. Seeking the edge, scientists from Southers’ “MilliCom” created a breed of seemingly unstoppable clones, called Genetic Infantrymen — G.I.s for short — only for all of them to be massacred upon their arrival on Nu Earth. Only one survived, with a new mission: Find the traitorous Southern High Command general that betrayed the G.I.s, and kill him.

There was a twist to the formula, however; a narrative trick to help Rogue (as he became known) offer exposition to readers without having to talk to himself all the time. Although Rogue was the only surviving G.I., he was accompanied on his mission by three fallen comrades, because he had rescued their “biochips” — essentially, a computer chip with their personalities on it — and implanted them in his equipment, giving him a talking gun, backpack and helmet to crack wise even when the chips were down. The three supporting characters would prove to be a significant part of the series’ appeal. 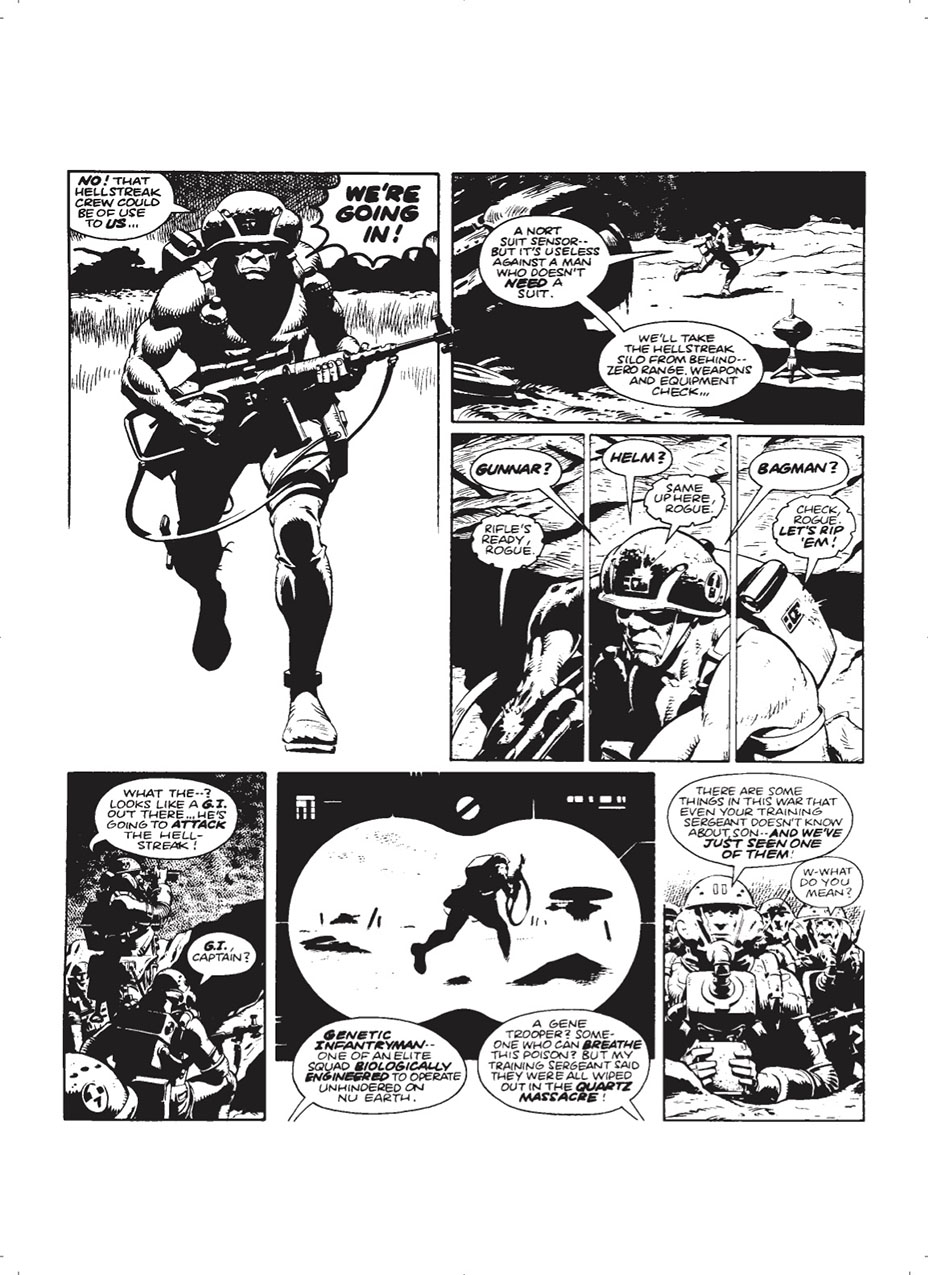 For years, Rogue and his talking equipment searched for the figure who became known as the Traitor General, only occasionally distracted by Norts (who would, underscoring their Axis inspirations, scream “NAIN!” as they were ruthlessly gunned down) or other events that would underscore the dehumanizing aspects of space war. The strip was an enjoyably contradictory mix of hyper-masculine action and “War is Hell” reflection, enlivened with occasional intrusions advancing the larger mythology or featuring more heavily obvious science-fiction elements. Both Gibbons and Finley-Day left the strip eventually, but other creators who worked on its initial incarnation subsequently included Alan Moore and Preacher co-creator Steve Dillon.

By 1989, however, Rogue Trooper was in a state of disrepair; the Traitor General had been uncovered and a subsequent direction — that saw Rogue attempt to assassinate the figures responsible for keeping the war going — had failed to inspire readers and creators alike. The decision was made to reboot the concept from scratch, with Dave Gibbons returning to write a story that came to be called “The War Machine” — a refresh that removed the talking equipment, gave Rogue a name finally (Friday) and made over the strip as a darker, more downbeat entity. (Will Simpson’s painted artwork helped this, considerably.) 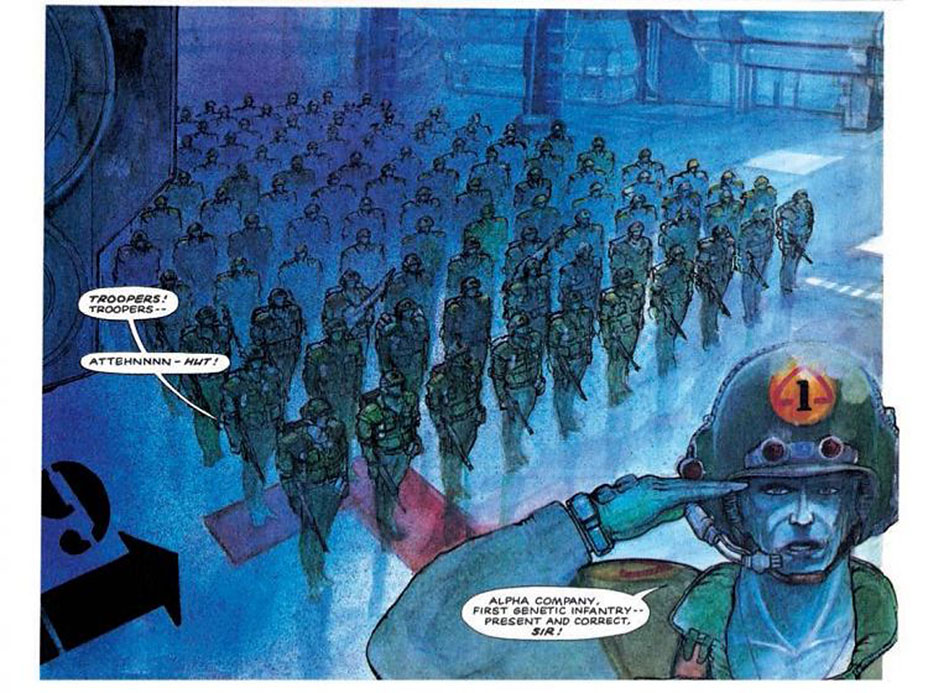 Unfortunately, subsequent storylines failed to build on the foundations laid by “The War Machine,” and Friday essentially vanished by 1996. That wasn’t the end of the Rogue Trooper concept, however; the following year, 2000 AD debuted a new series called Mercy Heights, which featured a Genetic Infantryman called Tor Cyan. Across the next five years, that strip and its sequel, Tor Cyan, would reveal the strip to take place in the same universe as the original incarnation of the Rogue Trooper concept, and prove to be a continuation of the property.

With Rogue Trooper himself now relegated to occasional appearances, Tor Cyan would lead the way for the expansion of the strip’s universe via spinoffs and sequels. It was followed by The 86ers, about a squadron of fighter pilots on Nu Earth; Jaegir, told from the point of view of a member of the Nort military; and Hunted, which revisited the original Traitor General storyline from the point of view of the General himself. The three latter series share one thing in common: writer Gordon Rennie, who almost single-handedly has kept the property growing for more than a decade at this point, complicating the simplistic morality of the original with something more political and ambiguous without undoing or rewriting what was originally created more than 30 years earlier. 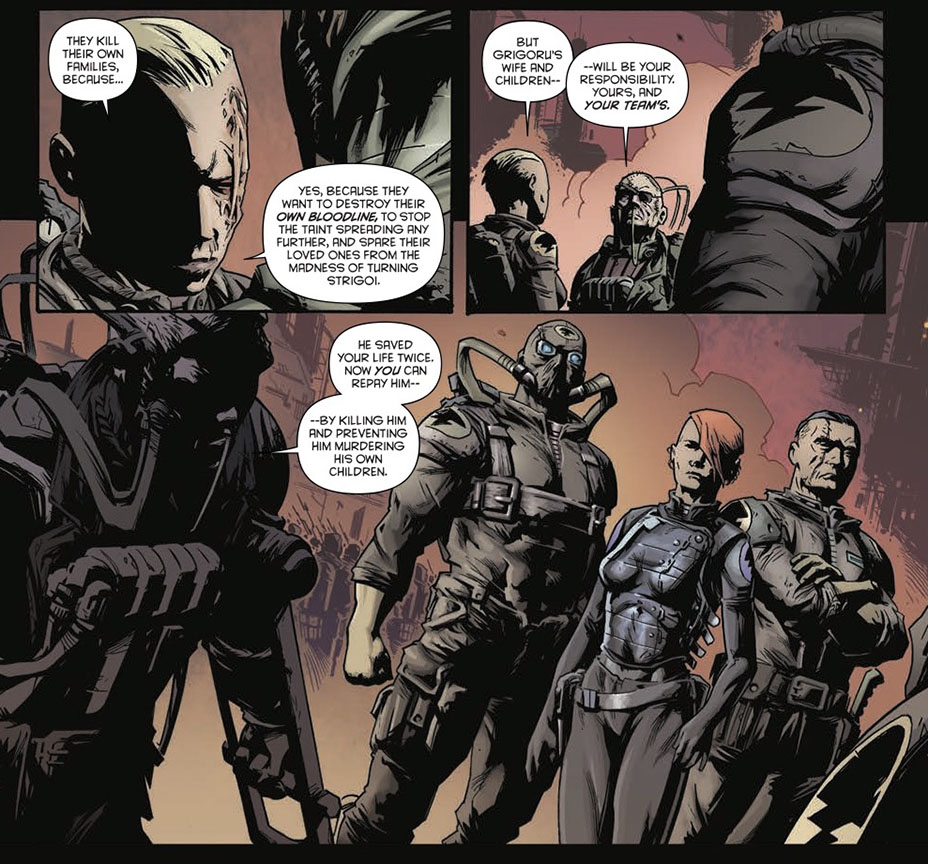 Whether or not the movie Rogue Trooper that Jones will create is going to model itself after the very first comic, the “War Machine” reboot or the more complicated mythology as it current exists across multiple series remains to be seen, but one thing is certain: If done right, this could be something unlike any other comic book movie out there.