Ed Skrein is leaving the Hellboy reboot after an outcry over his casting.

The actor, who is known for playing the villain in last year’s Deadpool, joined the cast of the Hellboy reboot last week and was set to play rugged military member Major Ben Daimio, who in the comic books is Asian. Some on social media objected to the casting, calling it another example of Hollywood whitewashing a character. And after a mounting outcry, Skrein has decided to leave the project, sharing the news Monday on Twitter.

“It is clear that representing this character in a culturally accurate way holds significance for people, and that to neglect this responsibility would continue a worrying tendency to obscure ethnic minority stories and voice in the Arts. I feel it is important to honour and respect that. Therefore I have decided to step down so the role can be cast appropriately,” the British actor wrote in a statement. “Representation of ethnic diversity is important, especially to me as I have a mixed heritage family. It is our responsibility to make moral decisions in difficult times and to give voice to inclusivity. It is my hope that one day these discussions will become less necessary and that we can help make equal representation in the Arts a reality.”

Conversations about whitewashing have come to the fore over the past year after projects including Ghost in the Shell and Doctor Strange cast white actors as characters who were Asian in the source material, but this is the first time an actor has exited such a high-profile project in response to public criticism. Skrein swiftly began receiving praise online after making his announcement.

'Ghost in the Shell': 4 Japanese Actresses Dissect the Movie and Its Whitewashing Twist

David Harbour (Stranger Things) is starring in the Hellboy reboot, which is based on the demonic hero from comic book creator Mike Mignola. Game of Thrones director Neil Marshall is helming the project. Ian McShane is playing the hero’s adoptive father, while Milla Jovovich is portraying a medieval sorceress who wants to destroy humanity.

Harbour thanked people for speaking up with their thoughts, tweeting: “Hey internet. Thank you for your voices. An injustice was done and will be corrected. Many thanks to @edskrein for doing what is right.”

Producers Larry Gordon, Lloyd Levin, Millennium and Lionsgate also released a statement Monday in support of Skrein’s decision: “Ed came to us and felt very strongly about this. We fully support his unselfish decision. It was not our intent to be insensitive to issues of authenticity and ethnicity, and we will look to recast the part with an actor more consistent with the character in the source material.”

Here is Skrein’s full statement announcing he is leaving the project: 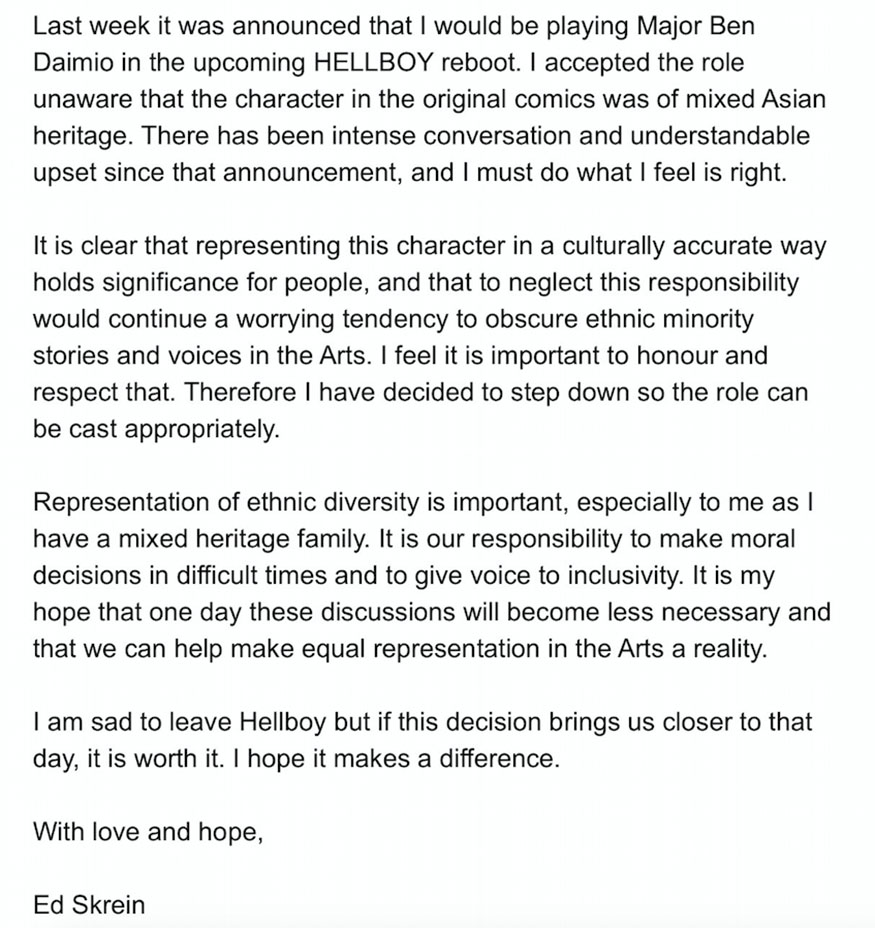 Rebecca Ford contributed to this story.