As the 10-year anniversary of Scott Pilgrim vs. the World approaches, many fans will be remembering the quirky characters and endearing romances, some fleeting and others with staying power, as well as action sequences bursting with frenetic energy, quick glances from here to there, and injections of personality in every physical move where evil exes are battled.

Michael Cera and Aubrey Plaza, who morphed into the characters of sweet and slightly naive, dabbling musician Scott Pilgrim and fierce waitress Julie Powers remember all the fun, too, and of course, the chaos of the cult film, which turns 10 on Aug. 13. Though the $60 million movie bombed at the box office with $47.6 million globally, it remains a cultural touchstone for its legions of fans.

On the phone from the U.K., filmmaker Edgar Wright recalls that Scott Pilgrim was one of the only projects he’s done where the project came to him — almost everything else has been self-generated. He first heard of the property in 2004 at a pre-release, industry screening for Wright’s Shaun of the Dead at Raleigh Studios. Adam Siegel and Jared LeBoff from Mark Platt Productions approached him, describing the project, based on Bryan Lee O’Malley’s comic, as “John Hughes meets Kill Bill.” Says Wright, “I think that’s a pretty accurate description of the movie.”

Wright goes on to say that, not only did O’Malley’s artwork pull him in with such humor and sense of structure and composition, but the premise of an action movie dealing with emotional baggage grabbed him, too.

Wright impressed Cera with how much work he put into Scott Pilgrim, even before cameras rolled.

“Edgar is very obsessive about his projects,” recalls Cera, adding that before production was even close to getting started, he had basically described the entire movie to the actor, who was in his early twenties at the time. There were storyboards, animatics, music cues, fight sequence demos and more. On set, Wright would set off air cannons himself and have exploding lightbulbs everywhere. “His enthusiasm is very infectious,” says Cera. “He’s exactly what you want in a director.”

Plaza was similarly drawn in by Wright’s creative process, though there was some confusion upon their initial encounter. “I had a funny first interaction with him,” she tells THR, explaining that she happened to be in Los Angeles for a few days around the time that casting director Alison Jones, who had cast her in Funny People and Parks and Recreation, recruited her for the audition. “It was so last minute, it was like today or tomorrow, for this new Edgar Wright movie, and of course I was like, ‘absolutely,’ recalls Plaza. “I’m not prepared at all, but I will be there.”

After a few times performing the scene, Plaza detected a British accent. “And then he was like, ‘You know that I’m the director,’ right?’ I was like, oh my god, no, I didn’t know,'” she remembers with a laugh. Of the audition, which took place so randomly and suddenly, Plaza says she was in the right place at the right time.

Wright does not remember that particular part of their first encounter, though he calls the cast of Scott Pilgrim “an embarrassment of riches” and recalls that while reading the comic books, one of his reasons for wanting to do the film was how much fun it would be to cast. “There was the opportunity with that particular story to really do something where you could have a new generation of talent — the age of the characters in the books was really young.”

Noting that there weren’t many adult or parental characters in the film, Wright likens it to watching a “20-somethings playground” as the oldest person in the movie was Jason Schwartzman, who turned 30 just weeks before the film opened. “It creates an interesting feel where, I don’t think you really question it when you watch the movie, it’s like, we’re in this big city and there’s not a single adult in the movie.”

Cera compares the shoot, which was almost a year long, to a summer camp that gave him a motivation to get in shape. “We would all wake up in the morning and do training,” Cera remembers. “Beat the hell out of our bodies, then later in the day we’d be rehearsing again.”

For Wright, fight training was one of his favorite recollections, too — because he would participate. “I have this thing where I wouldn’t make the actors do anything that I wouldn’t do, so if there were any rigs, like flying up in the air, I would do it and sometimes video myself, or do it in front of Michael.” Of the training classes, Wright remembers working out at 8 in the morning with the main cast, even those who weren’t in any fight scenes, like Kieran Culkin. “The kids who weren’t in the fight scenes felt left out that they weren’t doing any of the training, so they just came along for the hell of it just to train. It was so fun.”

Wright later adds, “Seeing Michael and Chris Evans doing push-ups together is just… this is why you get into the business, for these, sort of, beautiful moments.”

There were times when it got to be overwhelming for Cera, especially toward the end when all the physical sequences and bigger set pieces were stacked together. “It was exhausting, but in a really liberating way when you’re working on something that feels very big with a lot of people working on it and a lot of components. It’s like doing a puzzle, a 5,000-piece puzzle on your kitchen table.” Calling it a “joy” to work on the entire time, Cera says he went through a big separation anxiety as soon as the film wrapped.

Cera was probably glad to be able to return to blinking, though. As the actor describes, there were lots of insert cuts in the movie — she looks at him, he looks at her — and in those moments he was encouraged not to blink because it became very noticeable. “If it’s a one second moment and there’s a blink in it, it’s not as cool,” says Cera.

“It was this idea of making it look more like live-action animation,” says Wright, “people would look much more animated.” He clarifies that blinks can be taken out digitally, but this was one of many techniques they tried out on set. “I think I got the nickname ‘the blink nazi,’ he says with a laugh. “It’s a funny thing that when you do it, it creates a very interesting presence.”

Cera, now 32, feels there has been a lot of luck in his life so far. “When I was a kid, I wasn’t really good at anything other than performing,” Cera recalls, adding that he was bad at schoolwork and sports. The underdog mentality that he’s sometimes been linked to may come from those childhood days, but also from his time on Arrested Development, the cult comedy TV series that was canceled at Fox in 2006 only to be revived years later by Netflix. “We were always very low rated and barely surviving as a show,” Cera says. “That’s a weird state to live in.”

Plaza is 36 now and names Janeane Garofolo — the first comedian she saw live in Allentown, Pennsylvania during her high school years — as one of her standup heroes. She remembers meeting Powers in her mental headspace during the movie. “I walked into the audition room and I didn’t feel like I had to do anything, I was just 100 percent there. I didn’t have to try. I understood the humor of it immediately.”

Then there’s the fact that Plaza’s life was not too far away from Powers at that time. She was living in Queens, New York, and “constantly getting fired from these waiting jobs,” recalls the actress, adding that, working as a barista, she often opened a soda shop in Tribeca at 5 a.m. and served drinks to less than pleasant business men.

Plaza says she wasn’t known for having a dry sense of humor or having a deadpan acting style back when she was working as a sketch comedian and improviser in New York, but it quickly became her signature when auditions for various projects all required that style of comedy. “But I think Julie Powers was the most aggressively angry version of that deadpan, sarcastic character.” 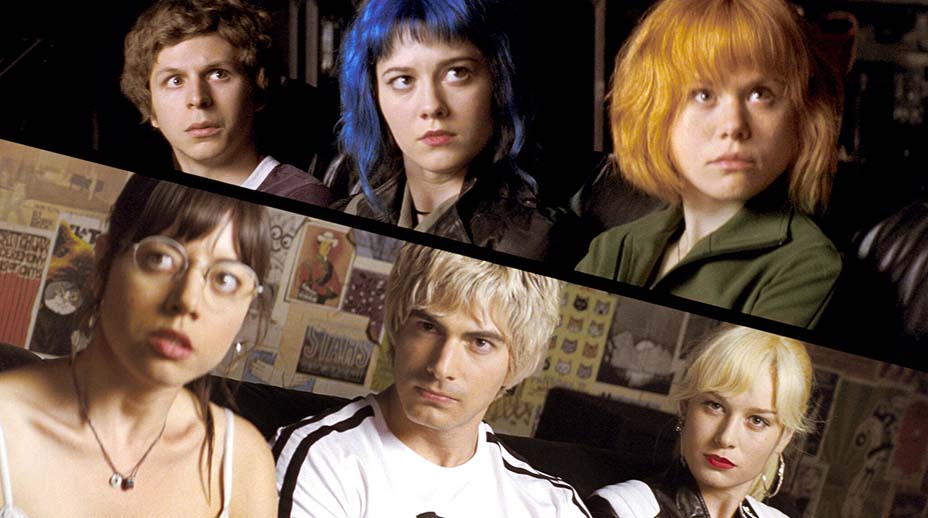 While Cera didn’t relate to Pilgrim on a personal level — because he was so heightened and inhabited a stylized world — there are some people who do carry the character around with them on a daily basis. “I was walking down the street in Manhattan and this guy called after me, and he rolled up his sleeve and he had a Scott Pilgrim tattoo on his arm,” recalls Cera, adding that the tattoo immortalized a scene where Pilgrim draws a doodle of Ramona when he’s trying to figure out where she is. “This guy had a tattoo of that on his biceps, it was pretty cool.”

Responses to Powers as a character have also been rather intense in the fan community. “My earliest memories were being in airports and having people recognize me and people wanting me to be mean to them or wanting me to yell at them,” says Plaza. “Now looking back it’s really funny because it’s kind of like, I could get away with being mean to anyone I wanted because they liked it.”

Reflecting on the production, Wright says that everybody “worked their socks off” and became very close. He mentions that, in the press, most of the attention over the years has always talked about the music, stunts and the cinematography. “But I think the other thing that’s really extraordinary is the production design — so insanely detailed — by Marcus Rowland. And then also, Laura Jean Shannon’s costumes I think are really great, so specific. We worked really hard on the color coordination and the idea of different people having different colors.” He goes on to say that, between the production design and the costumes, palette control was a main focus in terms of what character was wearing what outfit and what should or shouldn’t be on the set at the same time.

“It [was] a very special time for me making that movie,” says Wright. “Then, in 2010, it felt like a bit of an anomaly amongst other studio movies, and now it feels like even more so. I think we were lucky to get it greenlit in 2009 but I can’t imagine that that specific movie would get made now. It just doesn’t seem possible. I feel like it feels a bit like you’re watching some kind of unicorn or something.”

As for how Pilgrim and Powers would fare during a pandemic, the actors anticipate different trajectories. “I think he would not have a good time,” says Cera, likening Pilgrim to a completely irresponsible “hyper puppy.” Plaza acknowledges that while quarantining would be a “nightmare” for Powers, she would also be “rolling through the Zoom calls,” organizing drive-by birthdays, virtual parties and blowing up her social media with constant updates and videos…

… quite different to Plaza’s actual experience of the real pandemic, which she likens to “one long psychedelic trip” where time has deviated from its linear path and it feels as though its “pulsing.” Which is, perhaps, also an accurate description of the fast-paced adventure of Scott Pilgrim. 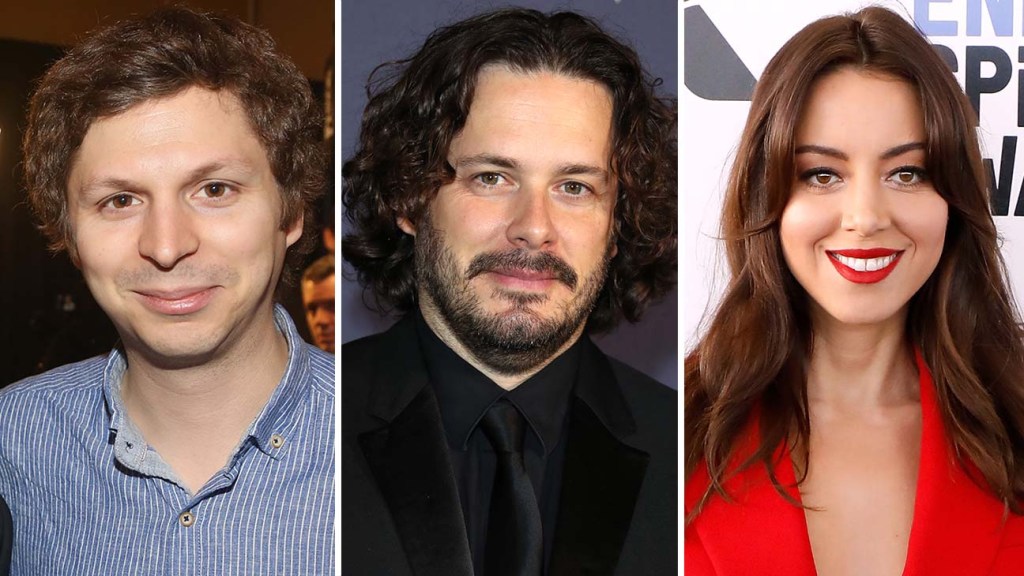