Six strangers. One objective. A setting laden with lord-knows-how-many pitfalls scattered across lord-knows-how-many rooms. Such is the stuff of Adam Robitel’s new movie, Escape Room. It’s also the stuff of Vincenzo Natali’s cult classic Cube, a gory, nihilistic carnival ride through a lethal maze that periodically reconfigures its own layout. Bad enough that one wrong move means taking a splash of acid to your mug; having your friends stumble back over your faceless corpse after wandering in circles for hours just rubs salt in the wound. (Not that you care. You’re already dead!)

Whether you’re proving conjectures, calculating velocity, brewing beer or figuring out when you can safely drink your morning coffee without scorching the roof of your mouth, formulas matter. They matter when you’re making movies, too, especially if you’re steering the wheel on a genre picture: An action film, for instance, or a revenge film, where the hero, after suffering hardships and travails and occasional gruesome injury, inevitably takes on and subsequently takes out the villain. That’s a solid blueprint; all anyone has to do is plug in the proper variables and presto: they have a working movie. It might not necessarily be good, but at least the thing has a running engine.

Formulas appeal to moviegoers on account of familiarity; tracing the basic outline of a film sight unseen means gauging whether or not the film tickles viewers’ fancies. Formulas appeal to those assembled on the opposite side of the lens, too, or else no one would insist on relying on them. And in horror, formula is key. Every genre likes formula, of course: Action, thriller, science fiction. But horror being (arguably) the most well populated of genres — the most ubiquitous — formula reads as considerably more important as an explanation for its longevity.

Take the most basic, the most staple, of horror formulas, the “cabin in the woods” movie, where a group of characters either visit or end up stranded in an isolated location and fall victim, one by one, to whatever evil dwells there: Say, American Gothic, or The Evil Dead, or Severance or Cabin Fever. Or take the slasher formula, another horror staple, and which happens to have plentiful crossover with “cabin in the woods” films: Friday the 13th, Burning, The Strangers, Iced.

Try imagining horror without these movies as building blocks of the canon, then think about the sample size. Eight movies alone doesn’t scratch the surface. There’s a certain kind of pleasure derived from watching helpless, hapless folks struggle to avoid adding to burgeoning body counts; there’s macabre delight in the endless, ingenious ways a person can be violently offed. If there wasn’t, that category of horror would have died out ages ago.

Formula means everything in horror, but formula means putting up with look-alikes and rip-offs that far outnumber the good, the better and the best the genre has to offer. Anyone can make a horror movie. Making horror doesn’t take much more than a few arms, some hands, a garbage bag full of loose bills and spare change and creative thinking. Looking for a reasonable facsimile for human entrails? Buy bacon from the local butcher. Need fake blood? Grab some corn syrup, water, cornstarch and red food coloring from the pantry and mix it all together. Shooting a zombie movie and in the market for makeup? Raid your sister’s vanity. You don’t even have to shell out for a camera if funds are tight: You just have to have an iPhone. 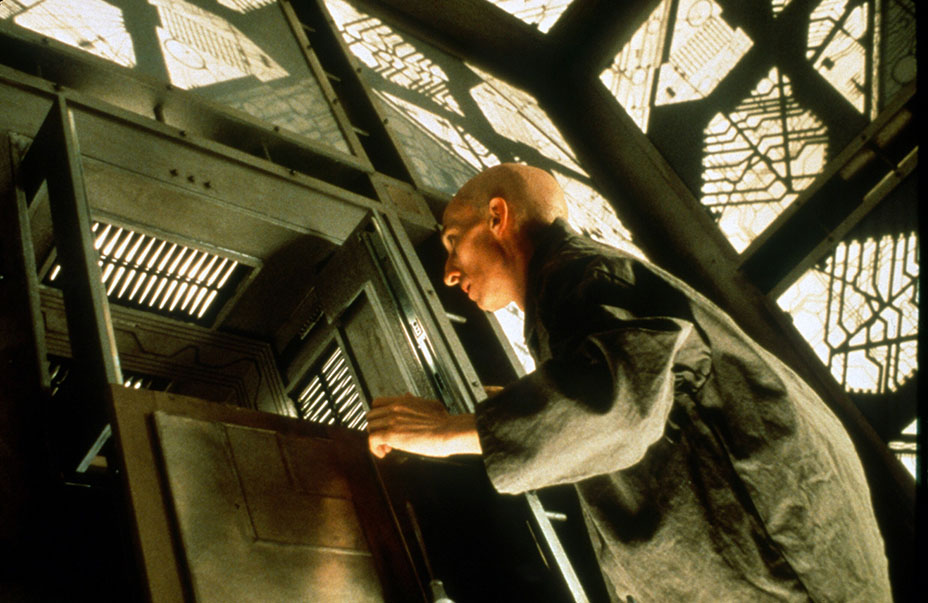 Robitel had more resources at his disposal than that for filming Escape Room, of course, not least of all the formula perfected by Cube, unintentionally mocked by two atrocious Cube follow-ups, liberally borrowed from by the Saw franchise between 2004 and 2017. (Natali himself also sorta remade his own movie in 2003’s Nothing, which is neither as good as Cube nor as bad as Cube 2: Hypercube and Cube Zero.) With a few pronounced differences, Escape Room hews closely to Cube‘s example: Zoey (Taylor Russell), Ben (Logan Miller), Amanda (Deborah Ann Woll), Mike (Tyler Labine), Jason (Jay Ellis), and Danny (Nik Dodani) all walk into a building, and they have to deduce and investigate and work together to save their skin. They each have traumatic backstories. One of them is also a bad guy in waiting — but which one?

In Cube, Quentin (Maurice Dean Wint), Leaven (Nicole de Boer), Worth (David Hewlett), Holloway (Nicky Guadagni), Rennes (Wayne Robson) and Kazan (Andrew Miller) all go through a similar ordeal, except they have no idea how they got there, and the audience has no idea who’s running the show. Robitel pulls back the curtain. Natali hangs blackout shades over the windows. And yet, discrepancies aside, the two films play out more or less the same: Characters get locked in room, traps go off, one character gets dead, the rest get out with their lives, rinse, repeat.

“What a fraud,” you might say. Not so fast! Escape Room does indeed walk in the footsteps of greatness, but we’re not exactly living in a moment of “peak Cube clones,” which makes the substance of Escape Room feel, if only thanks to timing, fresh. But “fresh” isn’t the same as “good.” Ultimately, Escape Room reminds us that horror needs formula, but emphasizes that formula is delicate: Tinker with it too much, and the equation goes awry. The film gives its antagonists a face, gives them a motivation right out of Hostel, and indulges in far too much set-up to sustain the mystery that makes Cube so effectively chilling. Movies need formula to function, but formula can’t function on bad filmmaking mathematics.