A couple of days before production was set to begin on Hell or High Water in late May 2015, Ben Foster showed up at director David Mackenzie’s New Mexico apartment and stuck an electric drill in his own mouth. An immersive actor — to portray Lance Armstrong, he once ingested performance-enhancing drugs — Foster had decided to chisel a chunk of his front tooth in order to play his latest role, a hot-tempered ex-con who, in CBS Films’ $12 million neo-Western, goes on a bank-robbing spree with his brother (Chris Pine) across the West Texas plains.

“I had pre-ordered a drill from Amazon [and sent it] to David’s apartment in Albuquerque,” says Foster. “I said, ‘I’m going to take down my tooth.’ He said, ‘Great!’ I got out the drill, and we were laughing about it. I took out my buck knife and shaved my beard off into a handlebar [mustache]. Maybe we had a few cocktails, I’m not telling.”

In Hell or High Water, the realism extends all the way to its co-star’s grin.

Written by Sicario scribe Taylor Sheridan, the film takes the audience on a Bonnie and Clyde-style road trip through some of the most economically depressed backwaters of the contemporary Southwest, as Toby and Tanner Howard, two mismatched siblings who’ve run into hard times, rob a string of Texas Midland Banks in order to pay off overdue loans on the house their late mother left them — loans owed to the Texas Midland Bank. In a parallel narrative, Jeff Bridges plays a soon-to-retire Texas Ranger who trades avuncular ethnic barbs with his Native American partner (Gil Birmingham) as they pursue the robbers across a bleak landscape still reeling from the 2008 economic crash. Although it came out in theaters in August, months before the election, in some ways the film captures the current Trump-ian zeitgeist more accurately than any of the election polls did.

“There was an opportunity in this film to take the pulse of Middle America, looking at where the nerves and the fault lines are,” says the director, who’s actually Scottish. “It was us trying to tune into America now.”

Sheridan was living in a cramped Hollywood apartment with his wife and 1-year-old son when, in 2011, he wrote the film’s script, then titled Comancheria. The former actor had just left his three-season gig as a regular on FX’s Sons of Anarchy to pursue a career as a screenwriter — his screenplay for his drug trafficking drama Sicario still was years in his future — and what he wanted to write about most was the place where he grew up. “At the time, Texas was experiencing the worst drought on record, and wildfires were blanketing the state,” he says. “Families that had been ranchers for 100 years had to sell off to the point where the auctions stopped accepting cattle. It was the end of a way of life.” 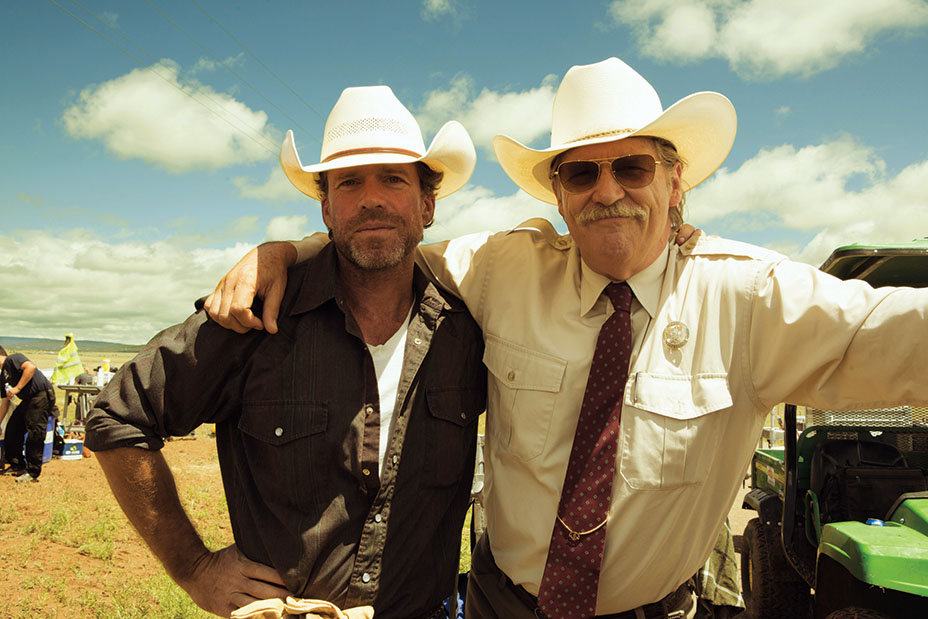 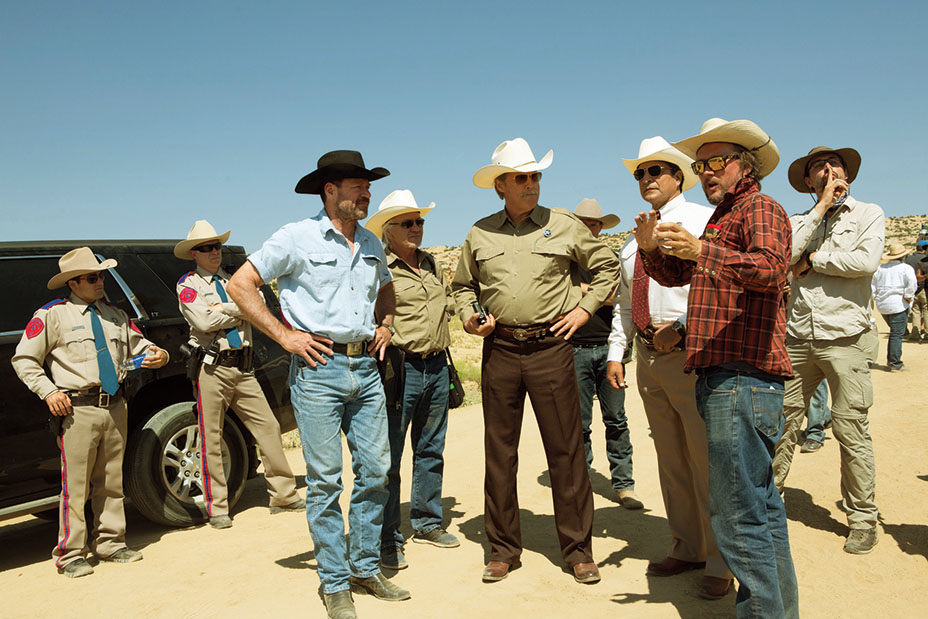 Comancheria ended up on the 2012 Black List of Hollywood’s best unproduced screenplays, which is how it wound up on producer-director Peter Berg’s reading list. Berg signed on to produce and brought the script to Sidney Kimmel Entertainment that spring.

That is where it sat for two years, until SKE production president Carla Hacken got involved. “They were having trouble casting it, they wanted to make it for too much money, it was going down a path where I could see it would not coalesce into being a movie,” recalls Hacken. After the title was changed — partly because of an industrywide inability to pronounce Comancheria — producer Julie Yorn (who made the Chris Pine-Denzel Washington vehicle Unstoppable) was brought on to finally get the project off the ground. Their first move was hiring Mackenzie, a Scotsman whose only experience shooting stateside was the little-seen 2009 Ashton Kutcher sex comedy Spread. “I didn’t care that he was an outsider,” says Hacken. “I thought he would make [the movie] more interesting. He read the script and said, ‘I have to do this.’ “

Pine was next to come aboard, in spring 2015. For the Star Trek actor, it was a rare opportunity to stretch. “I could do something different,” he explains. “I could play a man of few words and try to embody the stoicism of that Western archetype.” There was just one problem: He had a previous commitment to play Captain Kirk in Star Trek Beyond, which would start shooting in summer 2015.

That meant rushing into production on Hell or High Water. There were just five weeks of prep, barely enough time for Foster, who signed on shortly after Pine, to deface his smile with a drill. “I’m a contractor,” he notes. “I’m hired to build a guy. That’s how I view my work.”

Racing against Pine’s hard-out window, the filmmakers quickly assembled a crew and scouted locations in Texas and New Mexico (where much of the movie was shot to take advantage of tax incentives). “We wanted to have this timeless space where everything had been forgotten, a world left behind,” says cinematographer Giles Nuttgens. Then they structured an accelerated 37-day shooting schedule, often working long hours over six-day weeks. 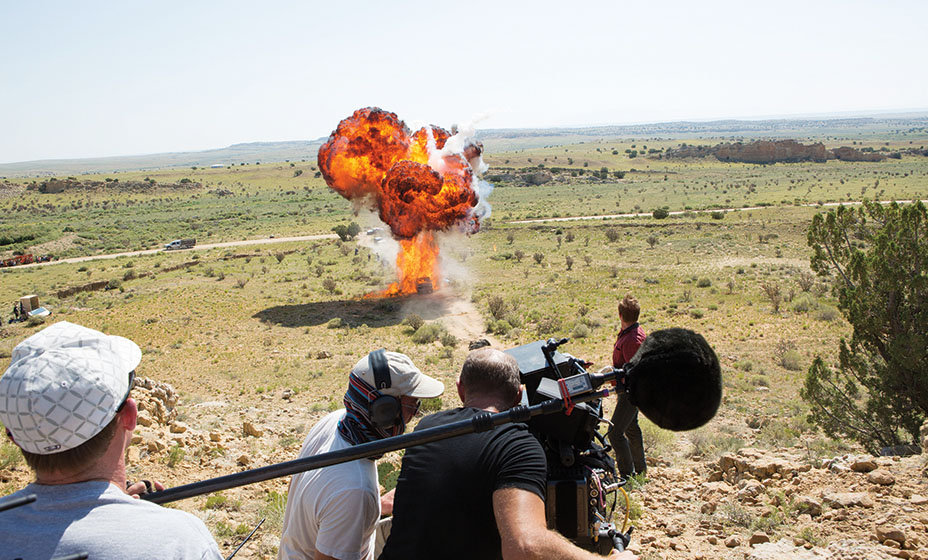 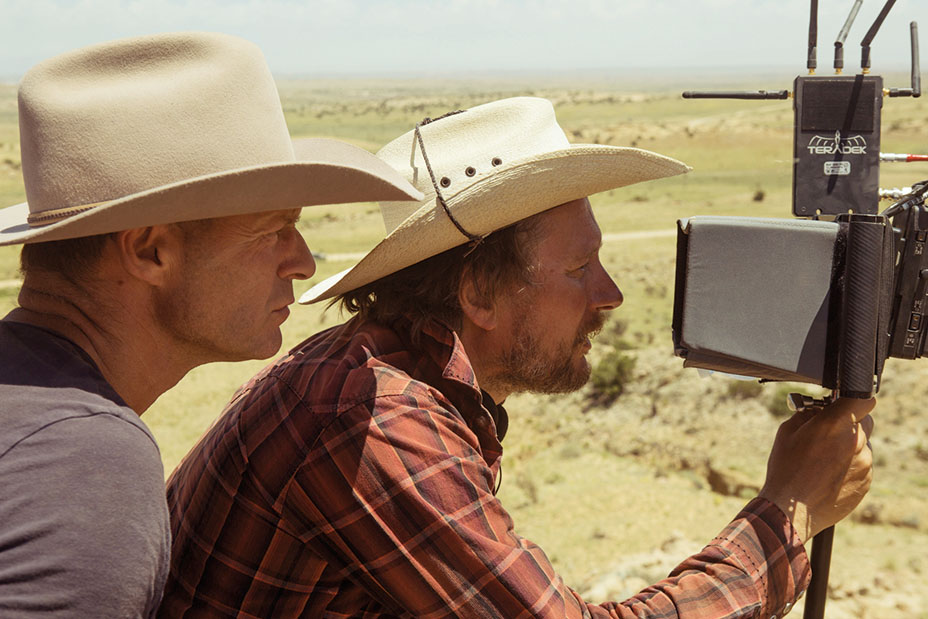 For Mackenzie, the time crunch was an opportunity in disguise. He shot much of the movie on the fly, filming outdoor scenes with existing light, keeping to a bare-bones crew and having the actors — including 67-year-old Bridges — perform their own stunts whenever possible. To streamline even more, he dispensed with such traditional production fixtures as a script supervisor, monitors and even a clapperboard. “I don’t like to be overprepared,” says the director. “This is not a sausage factory. A lot of the things you’re supposed to do are not that useful.” At times, there were some close shaves, like when they shot a high-speed Camaro chase scene down an alley with Foster doing his own driving. “The camera missed hitting a telephone pole by inches,” remembers Nuttgens. “And Chris is like, ‘This is f—ed!’ But you certainly can’t get that element of realism in a formalized film structure.”

While they filmed, editor Jake Roberts assembled footage into rough cuts and screened them for the crew during weekly cast and crew gatherings, which came to resemble family barbecues, with Bridges and Birmingham strumming guitars and singing songs. “We did Dylan, The Beatles, stuff like that,” recalls Bridges. “Playing together is kind of what you do when you’re acting. You harmonize.”

When Hell or High Water was released by Lionsgate in August, it accomplished the seemingly impossible — it united blue-state and red-state audiences. Critics in the coastal bubbles gave it raves, while ticket buyers in the heartland — and particularly southwestern states like Arizona, Nevada and Texas — lined up in bigger numbers than anyone expected. It ended up grossing $27 million, the biggest specialty box-office haul of the year.

Foster, though, wasted his money on that drill. When he arrived on the set for the first day of shooting, the producers insisted he have his broken tooth capped. Determined to get into character one way or another, he came back to the set the next day with yet another interesting grin. “Rather than get it back to normal, I had the tooth extended a little bit, made it extra-long,” he says. “And I had it yellowed.”