On Sept. 24, with just 44 days to go before the Nov. 6 midterm elections and a $60 million hill to climb, Florida gubernatorial candidate Andrew Gillum did what nearly every serious Democratic candidate running in this election cycle has done: He boarded a plane and headed to Hollywood.

In the ensuing 24 hours, the 39-year-old Tallahassee mayor, who stunned the country with his surprising primary victory (he trailed in the polls just weeks before the election), would traverse L.A., stumping for money at six entertainment industry fundraisers in a single day.

“Y’all are a generous state,” joked Gillum, an unabashed pro­gressive who was speaking to a crowd of about 50 at the first of those events — a $250-a-plate breakfast held at a private residence in Hancock Park, co-hosted by a Gen Z-focused PAC called OMG WTF. Later, Gillum would attend an event hosted by Laura Wasserman, wife of sports executive Casey Wasserman. Gillum wrapped up his whirlwind tour at a decidedly non-millennial event: a $5,000-a-plate dinner in the Hollywood Hills with guests Byron Allen, Jeffrey Katzenberg, Jane Fonda and Norman Lear. The evening fundraiser alone netted his campaign $500,000, according to a knowledgeable source. Not bad for a day’s work.

Surprisingly for a candidate who has been compared to Barack Obama, not a single news report was published about the trip — by design: The stigma of taking “Hollywood money” can still be a liability in many home districts, especially in red or purple states.

Given the byzantine ways in which money is raised in politics these days, it’s nearly impossible to say exactly how much the entertainment industry has contributed this cycle. According to the Center for Responsive Politics, the media industry (which includes Hollywood) had pumped nearly $21 million into House and Senate races as of June. Another $18 million is expected to be raised for state races, according to the Campaign Finance Institute. When the full figures are reported later in October, one source predicts they “will blow away” money raised in previous midterms. Those figures, however, don’t tell the complete story. Whereas in previous years the lion’s share of Hollywood money raised would go to the Democratic Congressional Campaign Committee, in this cycle the money is being spread out across dozens of individual candidates and a variety of PACs that can obfuscate where their money comes from. 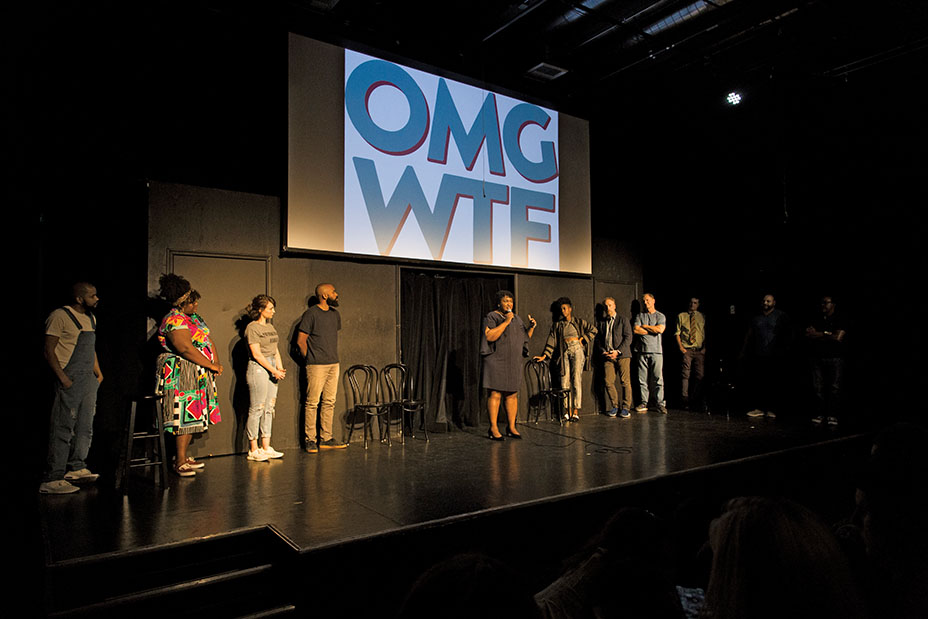 But what has made Hollywood’s lead-up to the 2018 midterms unique is how that money has been raised — and by whom. Interviews with political consultants and donors suggest that a younger, more diverse class of political players from the worlds of television and film has emerged and is ready to challenge the old order. President Trump’s victory over Hillary Clinton “was like the five stages of grief — shock, tears, disbelief, anger and denial,” says Andy Spahn, a longtime political adviser to mega fundraisers including Katzenberg and Steven Spielberg. “But that grief quickly turned into resolve.”

What followed has been unprecedented political activism, much of it at the grass-roots level. Email inboxes of donors, agents and executives have been flooded with invites to support candidates whom no one had previously heard of in districts that many couldn’t find on a map. It’s not uncommon for 10 political events to be happening in a single day.

The talent agencies, sensing a new level of angst among their clients, jumped in. While most agencies have had groups that deal with social and political causes, two firms created departments as a direct response to the Trump administration. In 2017, Endeavor launched a political action committee and brought in Amos Buhai to oversee it. Meanwhile, ICM Partners hired political strategist Hannah Linkenhoker. “For the last six election cycles, it’s really been the same crew of donors, which has been very male-heavy, who always got the first calls and the face time with the candidates, ” says Linkenhoker. “But things have changed so much in the last two years.”

Hollywood activism long has been depicted as a club controlled by a handful of powerful white men: Katzenberg, Spielberg, Lear, David Geffen, Haim Saban and Bob Iger are the names most often mentioned. But a new generation of power brokers is ascendant, including J.J. Abrams and his wife, Katie McGrath, cited for their personal donations and bundling skills; Shonda Rhimes, who held a get-out-the-vote rally at USC’s Galen Center on Sept. 28 that drew 10,000 people; CAA’s Darnell Strom, who has hosted events for Nevada congresswoman Jacky Rosen and Arizona congresswoman Kyrsten Sinema; and former Spotify executive Troy Carter, who held three fundraisers for Maryland gubernatorial candidate Ben Jealous (Carter also was a fundraiser for President Obama).

“One of my best friends called me back in 2007 and said he needed me to write a check for this guy from Chicago,” says Carter. “I wasn’t really engaged in politics prior to that.” He credits legendary music executive Clarence Avant for activating him and Katzenberg for providing guidance. “Jeffrey is someone I learned a lot from. He introduced me to a lot of senators and members of Congress.”

On the talent side, singer John Legend and his wife, Chrissy Teigen — both masters of social media — repeatedly were mentioned by those interviewed as up-and-comers (“They’re fucking John and Yoko right now,” says one donor). Same for actress Tracee Ellis Ross, who has been lending her platform and star power to the Swing Left campaign, a progressive organization aimed at flipping the House. Chelsea Handler also has earned her stripes hosting events for candidates like Jocelyn Benson, the Democratic nominee for Michigan secretary of state. 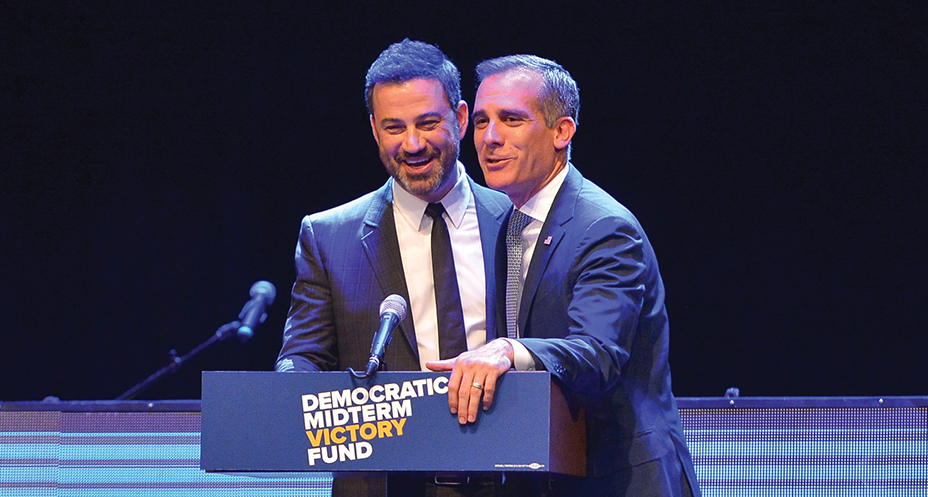 Obviously, part of the reason for the baton-passing is age. Of the aforementioned old-guard execs, only Iger and Katzenberg are under the age of 70 (both are 67), while Lear is 96. But age is only part of the story.

The Trump administration also has coincided with industry changes that have helped push a growing cadre of actors and creators of color to the political forefront thanks in part to their financial might: Rhimes, for example, isn’t simply successful, she is one of the most well-compensated showrunners of all time. But there also is a cultural component. The triumph of Marvel’s Black Panther and the ascension of black creators including Kenya Barris, Ava DuVernay, Issa Rae, Ryan Coogler and Barry Jenkins has opened the industry’s eyes to the wider upside of diversity. This in turn has had a profound effect on the makeup of Hollywood’s political scene. While the moguls who write six-figure checks are still mostly white and male, campaigns now realize that the optics of who organizes an event can be as valuable as the money raised.

“You’ve seen the growing up of Hollywood political activism in the last two years,” says Los Angeles Mayor Eric Garcetti, who has been tipped as a potential presidential contender in 2020. “It has gone from the symbolic to the strategic. So it’s no longer just ‘find me a star for a fundraiser’ or just tweet something but organize, educate and learn.”

For the past year, Garcetti has been leveraging his ties to Hollywood’s donor class to help out-of-state candidates, visiting places like South Carolina and Iowa (both early primary states, it should be noted). Garcetti says the 2016 election humbled the town, which now realizes that power lies in understanding places that are nothing like California. “Since Hollywood always saw itself as ‘special,’ they always thought talent was enough — that was their magic dust,” he says. “But they now recognize that can rub people the wrong way. More importantly, it comes up short when you need the mechanics, the money and the organizing to win.”

This year’s election also is set against the backdrop of the #MeToo movement. For years, Harvey Weinstein was a prolific fundraiser for Democratic Party candidates, and his exposed predations would prove to be an enormous public embarrassment for the party. Since then, the #MeToo movement has toppled other top industry leaders, like Leslie Moonves. This, according to some experts, has set the stage for a new “look” for the face of Hollywood’s activist community.

“The middle-aged white male is in retreat,” says Republican pollster Frank Luntz (who has been critical of Hollywood activism). “You are witnessing the dissolving of the old hierarchy, and the new one will be younger, hipper and more female.”

When New York congressional candidate Alexandria Ocasio-Cortez, who labels herself a Demo­cratic socialist, came through town in August, she didn’t meet with any of the industry’s established big-money donors. Some view that move as proof that the progressive-vs.-centrist schism within the Democratic Party, which has bled into calls for elders like House Minority Leader Nancy Pelosi to step aside, is also playing out in Hollywood fundraising.

“It’s a really good wake-up call for the Democratic Party,” says Ben Sheehan, the 33-year-old founder of OMG WTF, which focuses on Democratic nominees in Republican-controlled swing states (Ohio, Michigan, Georgia, Wisconsin, Texas and Florida; thus the PAC’s acronym). What Sheehan, a former head of talent at Funny or Die, finds offensive is the high-priced, cordoned-off exclusivity that has long been the price of entry to become a political “insider.”

OMG WTF’s events strive for price points that are “inclusive” (usually around $100 per ticket and sometimes free). “For a long time events have seemed like these stuffy, chardonnay-sipping parties in the backyards of fancy homes,” he says. “I think those types of events are going to become the minority.” 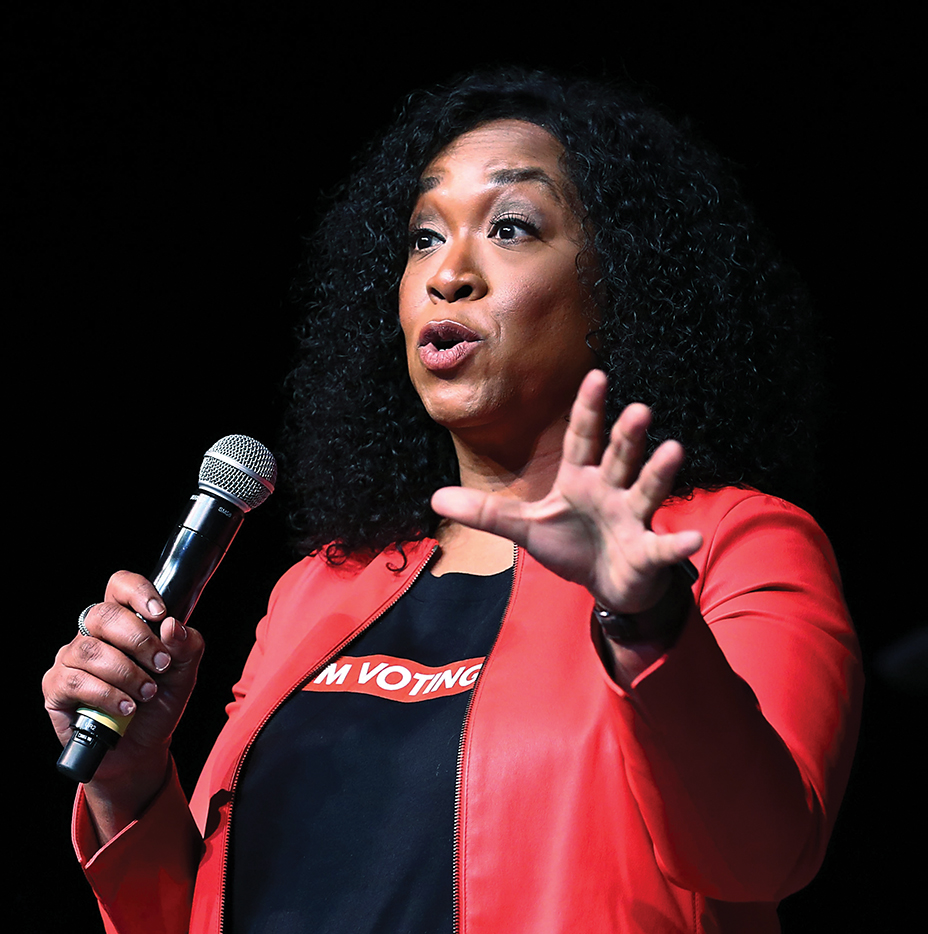 The optics of having millions of small donors rather than a handful of large ones is obviously preferable. But in reality, the issue is not so black-and-white, contends Spahn. “Back in 2007 and 2008, there was tremendous emphasis on President Obama’s use of social media to attract a huge number of small donors. But remember, the first major event held for him was hosted by Spielberg, Katzenberg and Geffen, which raised $1.5 million, gave him instant credibility and helped to put him on the map — so both are important and will continue to be.” On Oct. 3, his firm, Gonring Spahn, threw a $5,000-a-plate dinner for Joe Biden that was attended by Paramount’s Jim Gianopulos and Sony Pictures’ Tom Rothman and co-hosted by Katzenberg; it raised $125,000. Other big-ticket events organized by Gonring Spahn in recent weeks have raised millions.

So maybe the new reality is somewhere in the middle. Over the past eight months, the Hancock Park home of writer Christy Callahan and her husband, MGM Motion Picture Group chairman Jonathan Glickman, has been a revolving door for out-of-state candidates raising funds. They have hosted affordable (under $500) events for Gillum, Texas Senate candidate Beto O’Rourke, and Texas congressional candidate Colin Allred, to name a few.

Callahan says that a defining difference of the current climate is that donors are no longer seeking a quid pro quo for their efforts. “It used to be that you would want to cash in a chit somewhere — whether that was an ambassadorship or some other appointment. People used to be in it for the prestige,” she says. “I literally don’t care about any of that, and most of the people I know don’t either. I think people are just wigging out, and this is how they are dealing with it.” 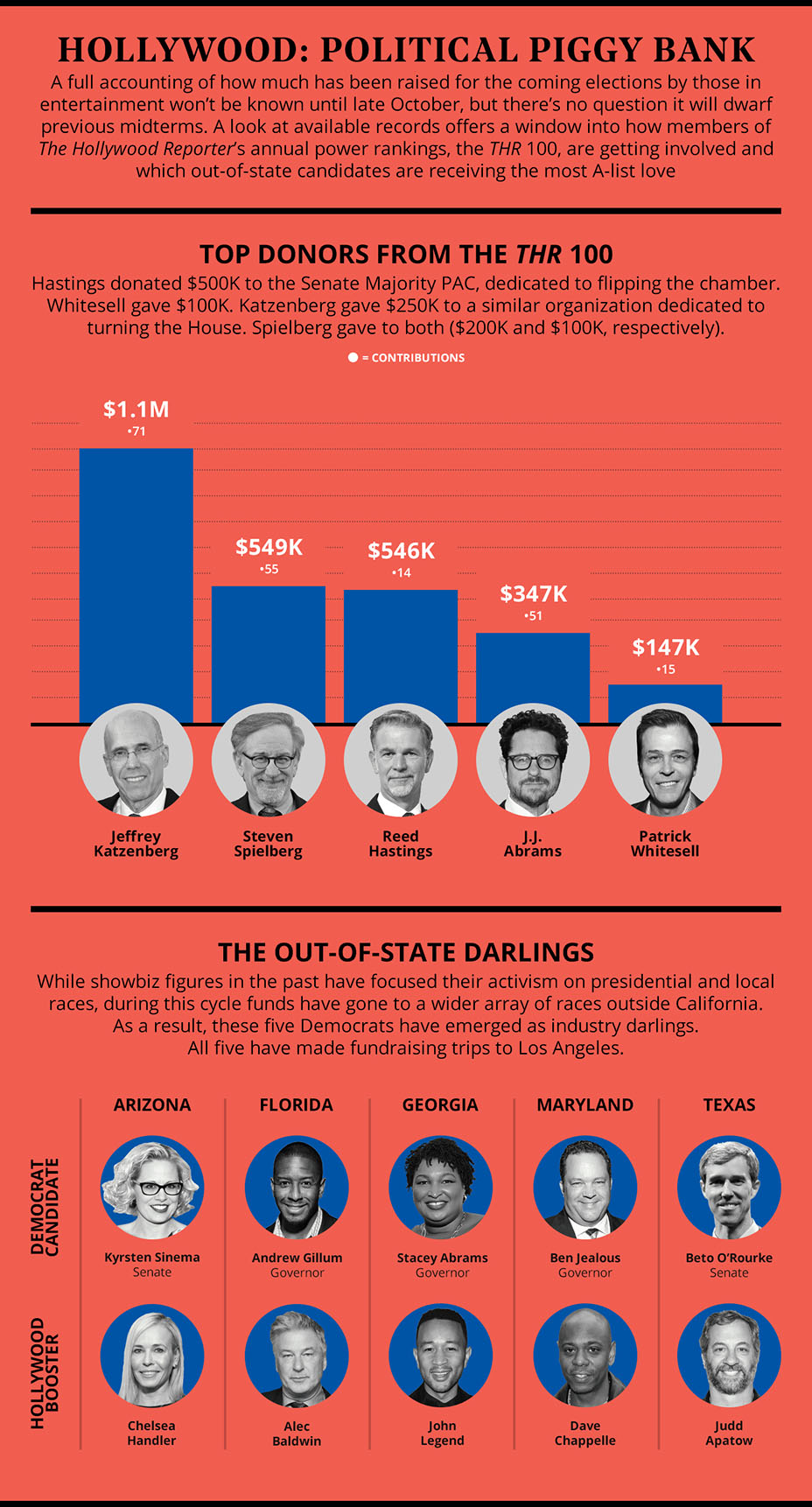