So far, Freddy Giorlando hasn’t caught COVID-19— but it’s already ravaged his life. The actor, whose credits include a small role on HBO’s Vinyl, is no longer working as the front-of-house manager at Gracie’s Pizza in West Hollywood or promoting at Koreatown nightclub Break Room 86. Meanwhile, his parents back in New Jersey both lost their own jobs to the pandemic — his mother was employed at a make-up counter, his father as a truck driver — and his younger brother, a fashion student in New York City, was briefly hospitalized when he had a panic attack after he was let go from his own position at a retail store.

“It’s trying, tough times,” says Giorlando, the father of a 12-year-old son. “I’m just relying on unemployment, and whatever stimulus package that goes through, to sustain me out here, to be able to keep the roof over my head.”

Amid the spread of the novel coronavirus in the United States, the entertainment and hospitality industries have taken a financial nosedive, with the restaurant business set to lose an estimated $225 billion in the next three months and Hollywood shedding an estimated $20 billion or more by March. In Los Angeles and New York, all restaurants, bars and clubs were closed between March 16 and 17, while entertainment productions have shut down en masse worldwide since at least March 12. Given the interdependence of the two sectors, “it’s a domino effect between both industries and a real economic burden for both industries at the same time,” says Joshua Chaisson, the co-founder and vice president of employee advocacy group Restaurant Workers of America.

The double whammy has been staggering for the demographic that exists at the intersection of Hollywood and hospitality. “It’s not just that our restaurant went away,” says actor Jeremy Cohenour, who’s recurred on Penny Dreadful and is a server who lost his job at Off Vine, a pre-theater mainstay for those visiting the adjacent ArcLight and Pantages. “It’s that both of our industries are gone. Plus, we’re worried about our families getting sick, often thousands of miles away. We feel like we’re extras in a disaster movie.” Adds fellow Off Vine server Michael Reiser, a voiceover actor with whom Cohenour is partnered in a now-quieted self-taping business: “It’s become a weird balance of taking things day-by-day and not knowing what the future holds.”

In recent days The Hollywood Reporter has spoken with more than two dozen people affected by the dual, symbiotic devastation. Since L.A.’s closure of restaurants, bars and nightclubs on March 16, the tables have already turned on servers. (The UCLA Anderson Forecast expects job loss to reach 100,000 in the leisure and hospitality sector in California alone once the pandemic crisis takes its course.) Among the assistance efforts now underway, Mozza owner and chef Nancy Silverton has led her few remaining staff in feeding out-of-work L.A. hospitality workers through the just-launched Restaurant Workers Relief Program. One hundred fifty out-of-work servers, bartenders, dishwashers, busboys and others lined up for lasagna and salad, as well as diapers, toilet paper and toothpaste on the first evening of operation, March 19.

For many, however, the lack of work and other opportunities is a source of deep anxiety. David Gunning, an actor whose résumé includes bit parts on Blue Bloods and NCIS, has been a bartender at West Hollywood industry favorite Craig’s for six years. He and his wife, who’s been managing Vivian, the restaurant at Beverly Hills boutique hotel the Avalon, are both out of jobs. (Gunning, no longer a server, is still working at Craig’s, assisting with its takeout business.) They worry about getting sick, as well as providing for their daughter. “Now there’s no income coming in,” he says. “Where does that put people who may be in a dire situation? There’s definitely a lot of fear.”

Actor Evan Charest, who’s landed roles in J. Edgar, The Big Bang Theory and Bosch, is the beverage director and co-owner of Melrose Ave. wine bar Severance. Before COVID-19, he was planning a second outpost. “We had furniture ready to go,” he says.

Now Charest’s had to lay off his 15-person staff, nearly all of whom are pursuing careers in entertainment. “If this goes on much longer, it’ll be the end of nearly every independent restaurant and bar in Los Angeles,” he says. Like other operators, he’s pivoting to delivery as a stopgap, and looking for assistance from the U.S. Small Business Administration.

Servers filing for state unemployment benefits know that the assistance won’t be much of a cushion. “When you’re working a job that’s so dependent on tips, your actual wage is low, so when you do file for unemployment, your benefit is jack shit,” says actor Willie James Warren Jr., a father of two young girls and laid-off mixologist at downtown L.A.’s Red Herring, owned by Ryan Murphy Productions president Alexis Martin Woodall. (The pandemic also cut short a gig at Warner Bros. doing background work on Joel Coen’s Macbeth: “It had been such a blessing.”) Independent contractors, moreover, like caterers, typically don’t qualify for unemployment at all. “I don’t even have that option,” says actor-screenwriter Aaron David, a caterer at Thousand Oaks’ Stonefire Grill. “Thank God my wife is still getting paid through her teaching because [otherwise] we would really be in a bad spot.”

Then there’s the self-generated calling cards, slipped beyond reach. Brooke Becker, who’d been employed through the app Truffle as a front-of-house brand ambassador for the Universal City sports bar General Admission, until both the technology company and the hospitality business closed shop, saw a nearly funded low-budget feature film she was producing postponed indefinitely — mere weeks before it was to enter the casting phase. It’s a psychological thriller about a woman whose loved ones are infected and replaced by otherworldly doubles. Becker, who was set to star, finds it “ironic that this infection has come along and made it impossible.” She’s acutely mindful of the film’s working title: The Delusion.

For some, the all-encompassing existential dread of the moment is, paradoxically, its own strange relief. “My life is always shrouded in uncertainty — usually I have this anxiety that I’m not seeing a certain solution in what I’m trying to achieve, like maybe there’s a headshot I should get, or a web series I should do, that might be causing a slowdown in my progress,” explains Ben Jacobs, manager at Brentwood’s executive-favored Bar Toscana, who’s landed small roles in productions like Netflix’s The Killing. “But that’s eliminated right now. Now, there’s no solution. When everything is totally fucked it weirdly circles back to a calm. I’m fucked, everyone else is fucked: What else am I going to do?” (He’s currently holed up at his family’s farm in Vermont, considering construction work, having driven across the country immediately after Bar Toscana shut down.) 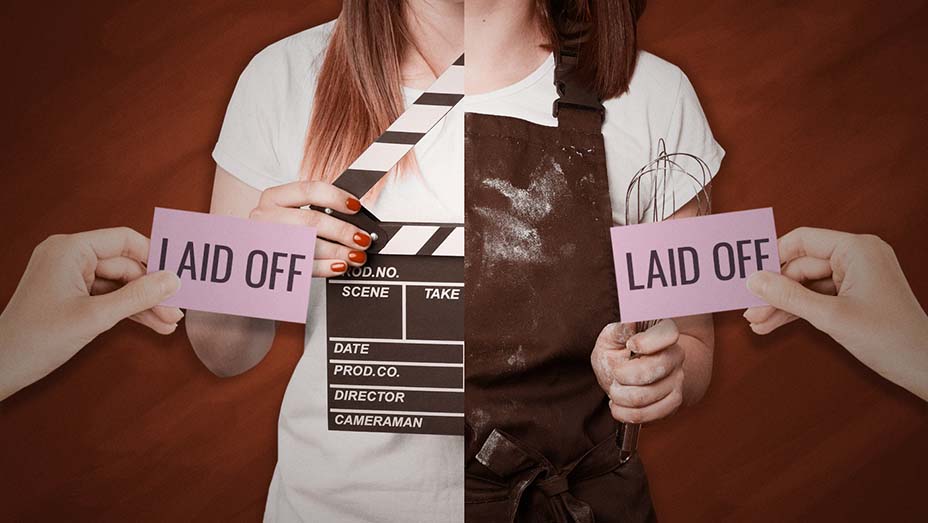 Likewise, actress Gina Manegio — a now-former server at the Sunset Strip’s BOA Steakhouse and Sherman Oaks’ Wood & Water — ironically felt “so relieved” after L.A. Mayor Eric Garcetti’s order mandating hospitality sector closures. “I mean, I’m terrified. Like, how am I going to pay rent? But at the same time, it’s just such a frightening time that I don’t really want to go in public,” she says, alluding to the necessarily direct and physically close nature of interaction endemic to the restaurant business. Similarly, she now has more free time given that four out of her five gigs (she’s also a Zumba instructor and an audiobook narrator) have been put on pause. “Getting assigned to stay home right now is kind of nice,” she says.

Actor Matthew Pitner, a server at West Hollywood brunch spot Hugo’s, was working toward producing a project about female arm wrestlers with a local theatre company. Now he’s attempting to rework it into a streaming event. “Creatively, it’s sort of exciting and frustrating — all the projects we were going to produce and direct, we have to switch them up because we’re all quarantined.”

For others, however, that pause comes with its own creative anxieties. As established industry names like Anthony Hopkins and Gal Gadot are taking advantage of a captive audience to produce feel-good videos for self-isolated fans, “I’m definitely nervous about letting it pass me by,” says former Catch LA server and actor Michael Litchfield — who just filmed a commercial for a major fast-food brand that has yet to be released. “That adds a whole other level of anxiety to the level of anxiety from the quarantine.”

Some hospitality workers have taken on new positions at their restaurants as the businesses shift to different takeout and to-go models in an effort to survive the government restrictions. The income is small compared to their usual wages, explains actor Spencer Levin (he recently guest-starred on Adult Swim’s Black Jesus), who’s spent the past three years at Hugo’s West Hollywood. But the goal is to help keep places afloat, both out of loyalty and to ensure that there are still viable businesses to work at after the shutdown order is lifted. Besides, wonders actress Jeana Mamer, a server and sommelier at Craig’s, “Where do you look for work when everyone is out of work?”

Of course, certain areas of the economy are booming in the midst of the crisis, including food delivery and grocery stores, and some workers THR talked to have begun making inquiries. Abie Irabor, a server at Silver Lake’s All Day Baby and an actor who has appeared on Chicago P.D., has looked at returning to babysitting and teaching to get her through this period. However, “that’s very saturated with teachers who are trying to find babysitting gigs, too” given school closures, she says. “I think it will just take a little bit longer than normal to find something.” (She and hourly coworkers have organized a GoFundMe called the All Day Babies Relief Fund to request financial assistance during this period.)

For Catch LA’s Litchfield, the dearth of work opportunities in the COVID-19 era has led to some soul-searching about the precarity of paycheck-to-paycheck gig work. “I question if I shouldn’t have made different academic and professional decisions a long time ago,” he says.

While many servers THR talked to were still hopeful the shutdown would be brief, hospitality owners’ own forecasts were grim. “Six to 12 weeks is what my partners and I are guessing it is — and for the community, that’s devastating,” explains Lee Maen, founding partner of the well-established Innovative Dining Group, which furloughed roughly 1,000 people. IDG’s West Hollywood restaurants (including ROKU and BOA) include, by his estimate, a front-of-house staffing mix that’s “60 to 70 percent in some way involved in [pursuing] entertainment.”

Giorlando, like most of the Hollywood aspirants THR spoke to for this coverage, remains resilient, tapping into the same glass-half-full perspective required to persist through even the normally perilous experience of attempting to make it in the industry. He reframes the setbacks as opportunities: Now that he’s temporarily forced off “the grind,” he’s focusing on his personal projects: a period-piece short about a greaser falling in love, a web series collaboration with friends about adulthood. “In this time of quarantine, what are people doing?” he said. “They are turning to entertainment. So, the best thing I can do — we can do — is create.”

Hollywood Guilds Tap Emergency Funds for Workers, But That May Not Be Enough