More than 10 million tourists flock to Hollywood’s Walk of Fame each year, but in the early morning hours of Oct. 27, James Otis wasn’t there to snap a selfie. The political protester instead wielded a sledgehammer and pickax to obliterate Donald Trump’s star. “I thought if I took that symbol away, it would help a lot of people understand that what Trump said [about Latinos and other groups] wasn’t right,” Otis told THR. His pulverization, which netted international headlines, quickly was followed by work to repair Trump’s star.

But most damaged stars, many bearing far more of the cultural symbolism Otis cited, receive lesser treatment: One-fifth of the 2,500-plus stars are in disrepair after decades of neglect, THR has found. Longtime Hollywood Chamber of Commerce president and CEO Leron Gubler acknowledges this figure matches a city review conducted in the 2000s. Neither he nor any other Walk steward disputed THR’s findings.

“It’s troubling,” says Oscar-nominated actress Terry Moore (1952’s Come Back, Little Sheba). “We earned our stars.” Adds Don Murray, who debuted opposite Marilyn Monroe in 1956’s Bus Stop: “If I were a member of the chamber, I would hope I’d be bothered.”

Actor Tab Hunter also points a finger at the chamber. “The Walk of Fame is a registered trademark of the Hollywood Chamber of Commerce,” he says. “They must be raking in the bucks. I wonder what they’re doing with it.”

Indeed, the disrepair is hard to reconcile with the roughly $1 million in annual revenue that the chamber — which selects honorees and stages the ceremonies at which stars are bestowed — appears to generate from the Walk. Along with the two dozen or so new stars added annually, each of which comes with a $30,000 “donation,” licensing fees — from key chains, shot glasses and T-shirts sold in local tchotchke shops — amount to “six figures” annually, says Gubler.

The degradation of the Walk is far from new. In 1986, the head of the chamber noted that decay had begun a decade earlier, as the neighborhood itself went into decline. (The official’s plan at that time was to fund a significant restoration, to the tune of $500,000, funded with an extensive merchandising pact that saw 170 celebrities, from Kirk Douglas to Charlton Heston, agree to allowing products bearing their starred names to be sold at local souvenir shops.) Yet even as gentrification has swept through the surrounding blocks in recent years — Charlize Theron sold her multimillion-dollar penthouse in a renovated loft building at the southwest corner of Hollywood and Vine earlier this year — the Walk remains a wreck. 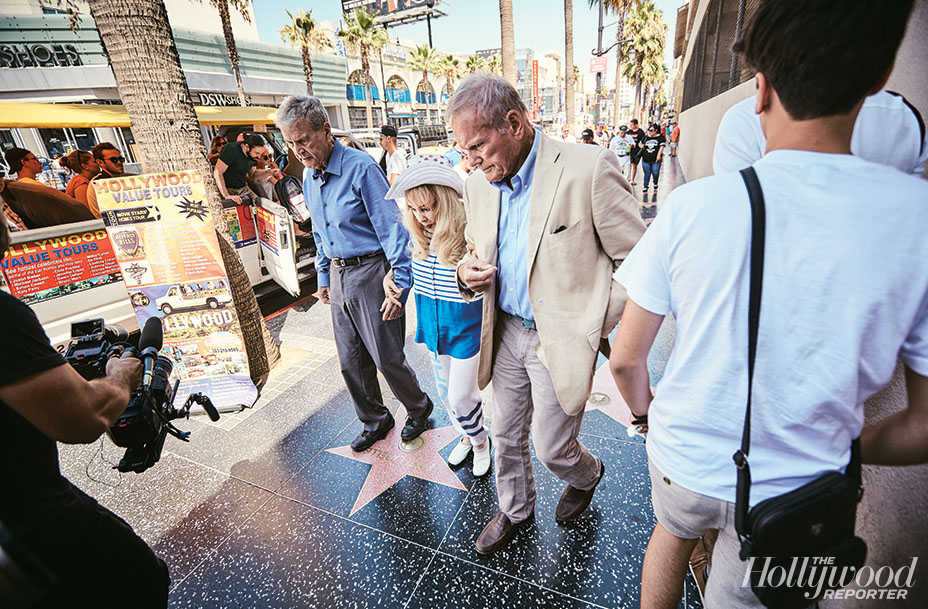 With the Walk of Fame, first rolled out in 1960 as a civic boosters’ gimmick (the selection committee included DeMille, Samuel Goldwyn and Walt Disney), merit never has been the key criterion: George Clooney and Diane Keaton are among the top names absent, while stars honoring radio DJs proliferate. A new star almost always is donated by a studio, network, record label or other corporate patron and usually is timed to a release — Quentin Tarantino was inducted during his 2015 Hateful Eight Oscar bid, and Lee Daniels’ ceremony is slated for Dec. 2, with his Fox series Star to premiere 12 days later. Still, even as the transactional nature of the honor generates the occasional eye roll, the Walk retains its status as a global tourism draw and atavistic shrine to the sparkle of Hollywood. The stars’ metamorphosis into public gravestones has been consecrated by TV news crews’ invariable rush to seek out shots of the commemorative flowers placed by the chamber-affiliated Hollywood Historic Trust as soon as an honoree passes away. “It’s almost a morbid thing, its memento mori quality — people carefully walking around Cary Grant and then walking right over the stars who’ve faded away to anonymity,” says CalArts urban and media historian Norman Klein, the author of The History of Forgetting: Los Angeles and the Erasure of Memory.

Half the donation for each star ostensibly is earmarked for maintenance, yet Jeff Briggs, a veteran member of the Hollywood Historic Trust, which is responsible for preserving the Walk, concedes the allotment “isn’t exclusively spent on repairs,” with some going toward uses “consistent with the mission,” such as streetscape holiday lighting. The chamber is not required to itemize expenditures as a 501(c)(6) nonprofit.

Made from pink and black terrazzo pavement, stars are supposed to be installed to stringent specifications. Terrazzo, marble chips mixed in concrete, is brittle; subpar workmanship can exacerbate its fragility. “People haven’t done it the right way at times,” says Ted Lambros, head of Alhambra, Calif.-based Arcadian Flooring Co., which has done restoration work on the Walk. “There hasn’t been a prioritization of craftsmanship if you’re having so many of these problems with excessive cracks. The terrazzo in front of Clifton’s Cafeteria on Broadway [in downtown Los Angeles] is decades older than the Walk and in great condition because it was laid well.” (Complete star restoration costs $5,000 to $10,000.)

Independent terrazzo diagnostician Fritz Iselin, who consulted with the chamber on repair work a decade ago, found the concrete underbeds serving as the base of the Walk to be often uneven. “The original slabs were not smooth,” he says. “They weren’t done perfectly flat.” The Walk’s primary installer for decades, Top End Constructors, did not respond to THR‘s repeated requests for an interview. 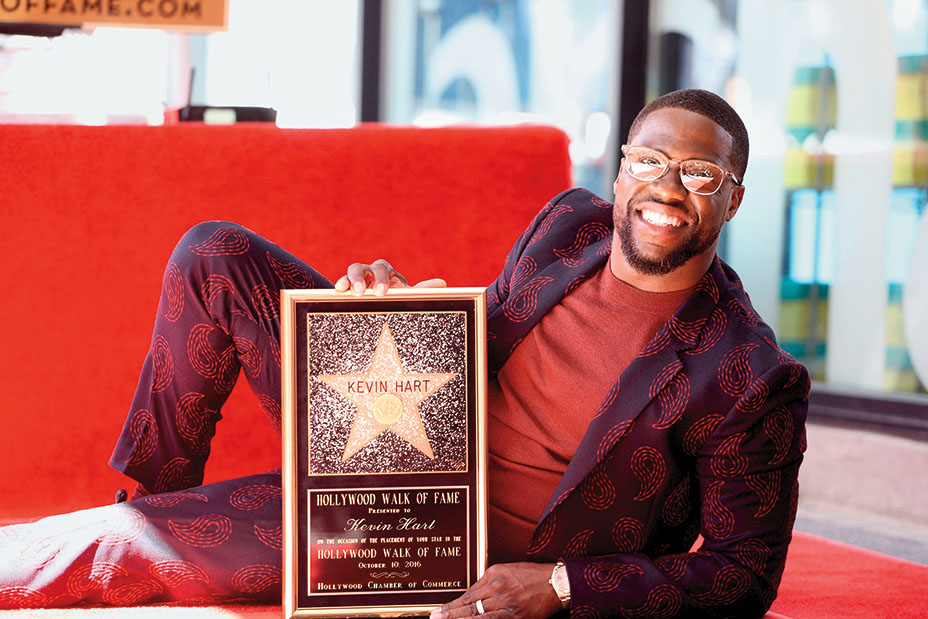 The trust has adopted a passive strategy in handling repairs. Its modus operandi over the past two decades has been to wait for private developers — particularly deep-pocketed corporate ones such as the CIM Group (behind the Hollywood & Highland Center) and HEI Hotels & Resorts (responsible for the W Hotel complex) — to move forward with their projects and thus incur the responsibility for restoring the adjacent post-construction sidewalk themselves.

While the city bears no responsibility for sidewalks (by law it’s the property owners’ responsibility — unless outsourced, as with the Walk, to a property owners’ association), various budget-strapped municipal departments have occasionally anted up small amounts. The county’s Metropolitan Transportation Authority, after causing havoc while building the subterranean Red Line, meanwhile laid out $1.5 million. The local Community Redevelopment Agency agreed to contribute $500,000 — but then California Gov. Jerry Brown vaporized CRAs statewide in a 2011 fiscal move. In handling repairs, the trust prioritizes serious damage, such as trip-and-fall hazards that could trigger lawsuits; everything else is “a judgment call,” says Briggs. “Is it purely cosmetic? Is it an offense to the honoree? If it’s kind of a hairline crack, that’s not something we’re going to spend money on. If it’s a missing letter, a missing emblem, we’ll fix that.” 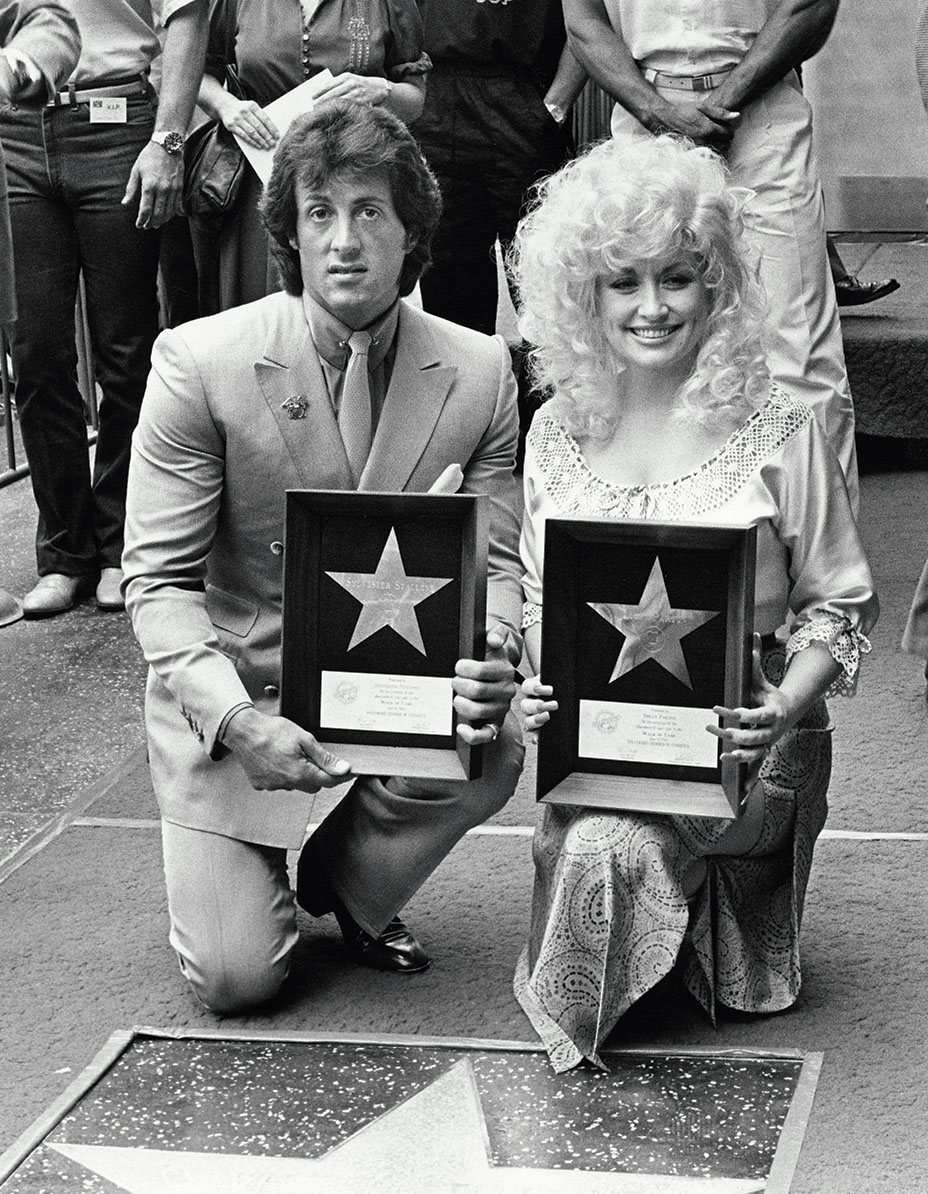 The trust’s apparent inability to secure public funding — Briggs claims “we are looking at grants” — is puzzling to some. “There’s a perfect opportunity for the trust to team with the city to obtain funding at the county or state level to make improvements,” says Deborah Murphy, founder of pedestrian advocacy group L.A. Walks. “The Walk functions as a transportation corridor as well as a cultural corridor. There are places to look, the [National Endowment for the Arts] included.” The trust has a similarly ineffectual history with fundraising; no effort has been made to appeal to the public or entertainment businesses. (Perhaps, in the latter case, because the chamber already extracts support from those same commercial entities to “sponsor” the stars in the first place. Noted a skeptic at one major studio to THR in 2012, “I don’t see us in a hurry to pony up.”) 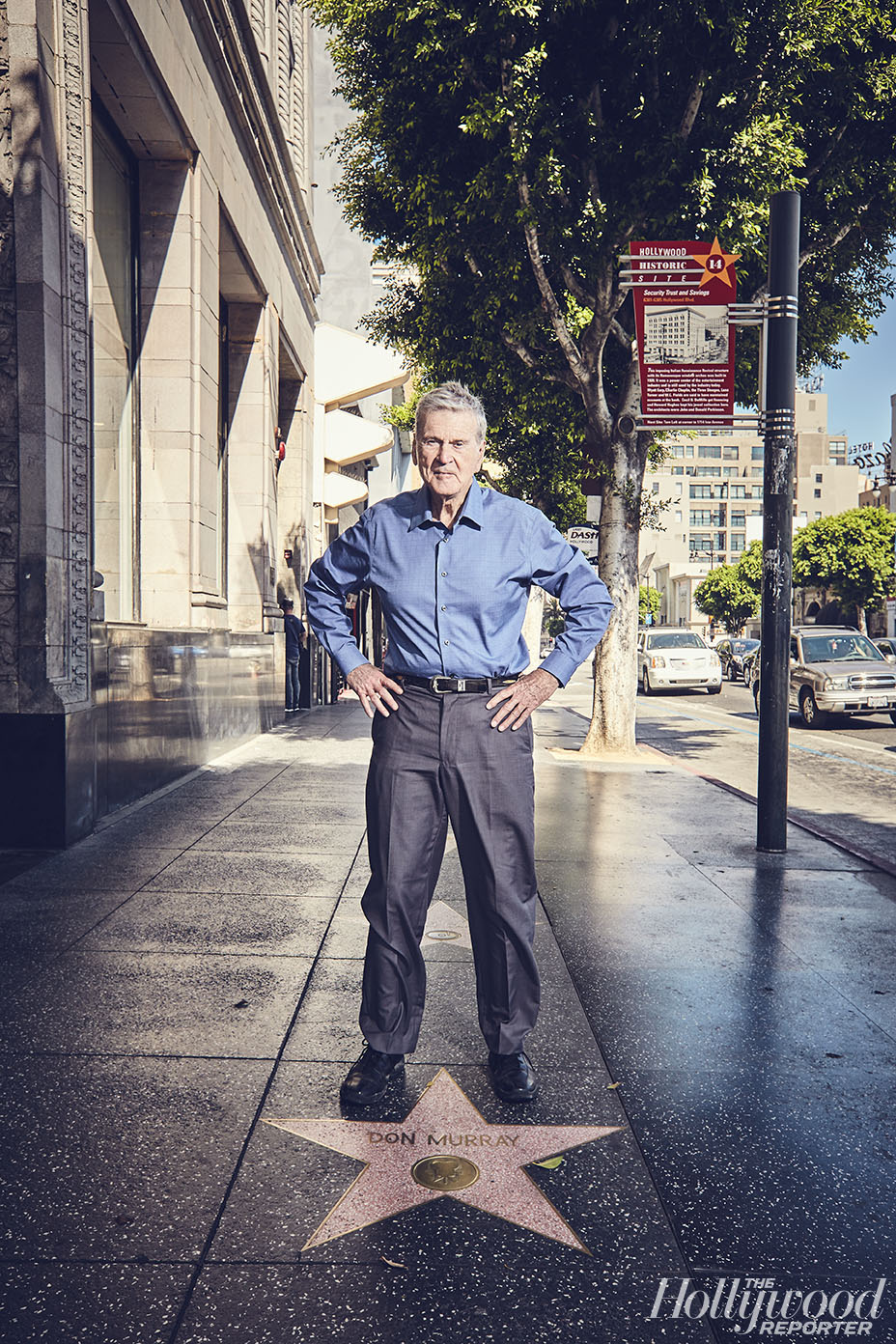 In fact, the only achievement of note has been a fizzled yet still technically ongoing chamber campaign begun in 2010 to raise $5 million for repairs by enlisting Hollywood-oriented lifestyle brands to open their wallets in exchange for their own logo-bearing engravings adjacent to the Walk. (Absolut Vodka and L’Oreal have been the only takers so far, doling out a combined $1 million.)

Repair pleas often come from honorees — or their loved ones and colleagues. “They may have passed on years ago, but those close to these people watch these stars like hawks,” says Gubler, who mentions that the family of Michael Landon — the Bonanza and Little House on the Prairie actor who passed away in 1991 — was upset for years that his Vine Street star kept cracking due to the roots of a nearby ficus tree. (It’s since been removed.) 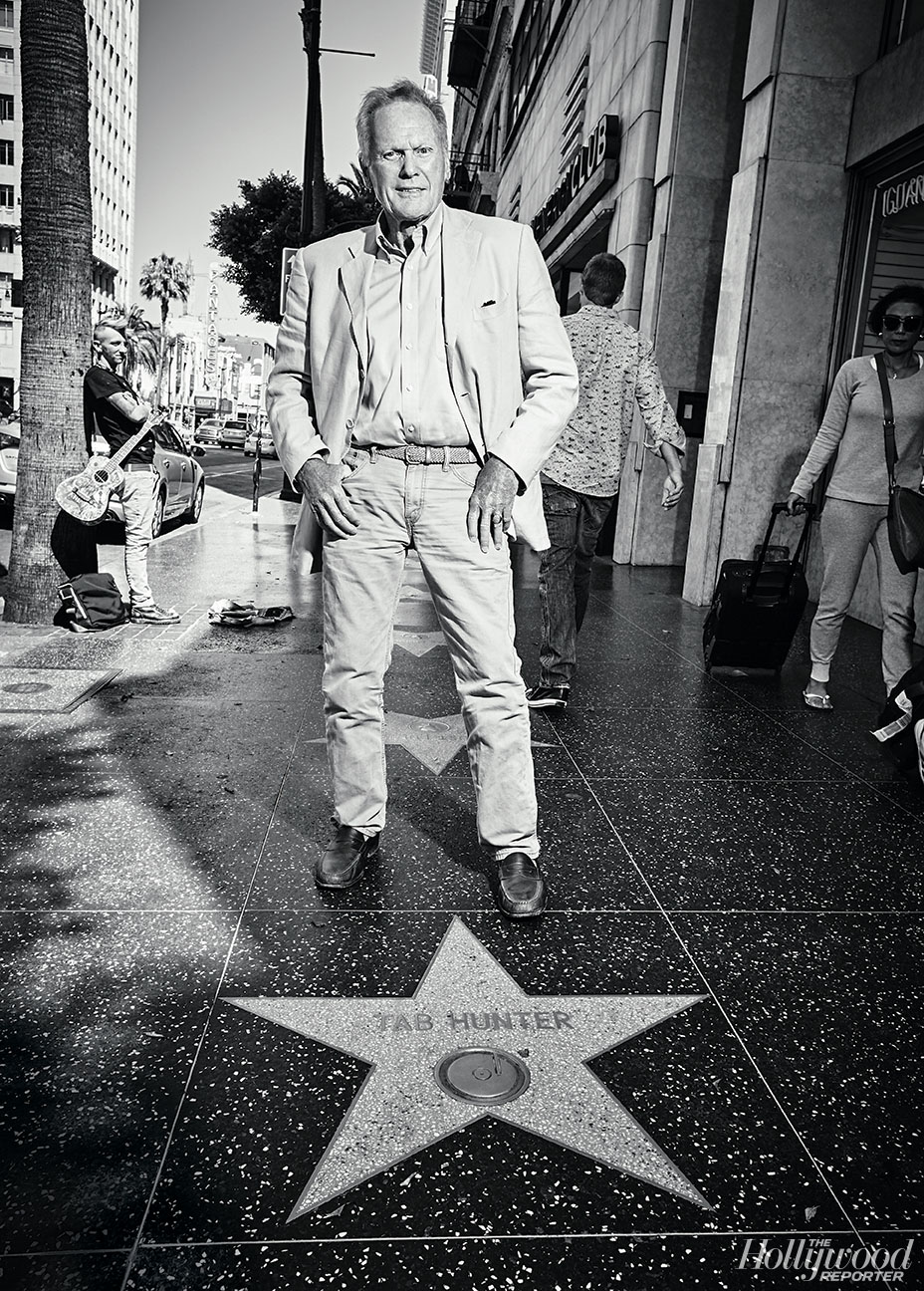 Regardless of the scope of the challenge of maintaining the Walk, preservationists agree it’s the prerogative of those in charge to meet it. “There is an expectation that designated historic-cultural monuments be appropriately maintained,” says Ken Bernstein, manager of the Department of City Planning’s Office of Historic Resources. Adds Christy McAvoy, founder of conservation nonprofit Hollywood Heritage: “There is definitely a responsibility on the part of the stewards of a historic landmark to keep it in repair. And the more public the landmark, the higher the usage — as with the Walk of Fame — the higher the stewardship challenge.”

But experts maintain that the Walk of Fame’s shabbiness is apropos. “People travel to see Hollywood Boulevard, and their fantasies and expectations are always going to be out of scale with reality,” says USC professor Leo Braudy, author of The Frenzy of Renown: Fame and Its History. Adds Stephanie Reich, an urban designer with the city of West Hollywood: “The cracks in the sidewalk contribute to the right sense of glamour and grit. If all of the stars were perfect, it would take the edge off of Hollywood Boulevard. It’d be Beverly Hills.”

Scott Feinberg contributed to this report.

A version of this story first appeared in the Dec. 9 issue of The Hollywood Reporter magazine. To receive the magazine, click here to subscribe.