Loung Ung was 5 years old in 1975 when the soldiers marched into her city. “That day, they were smiling,” says the human rights activist. “People were screaming, ‘The war is over! The war is over!’ I didn’t know we had been in a war. But they were wearing black shirts and pants, and that was different for us because Cambodia is a very colorful culture; we’d wear bright colors. My first thought was, ‘If they are so happy, why are they all in black?’ ”

Ung found out quickly enough, much to her regret, as these seeming liberators began to torture and kill anyone considered a threat, including artists and intellectuals and, ultimately, her father, a military police officer. “Over the next three years, eight months and 20 days, I would come to understand why they were in black,” she says.

It took decades before Ung was ready to tell her story in her 2000 memoir, First They Killed My Father: A Daughter of Cambodia Remembers. And not even she ever expected to see her book made into a movie, let alone one helmed by Angelina Jolie. (The film is now on Netflix and is Cambodia’s foreign-language submission to the Oscars.) 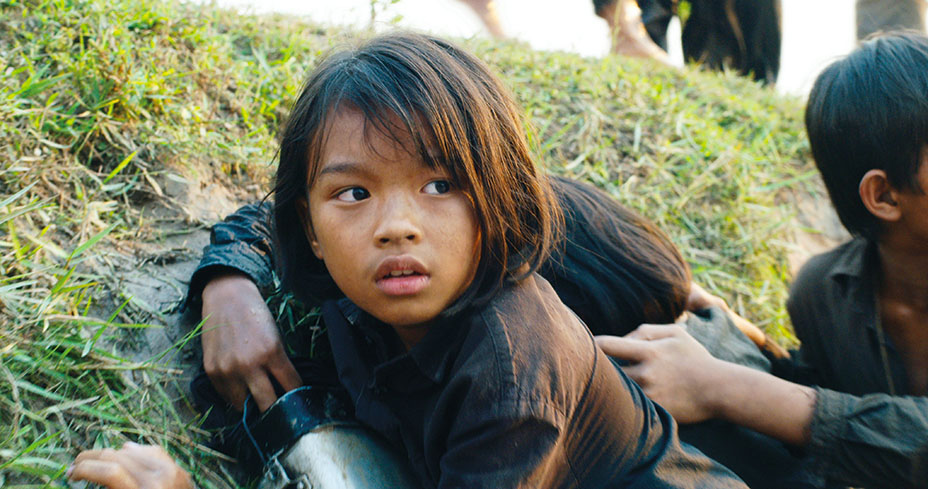 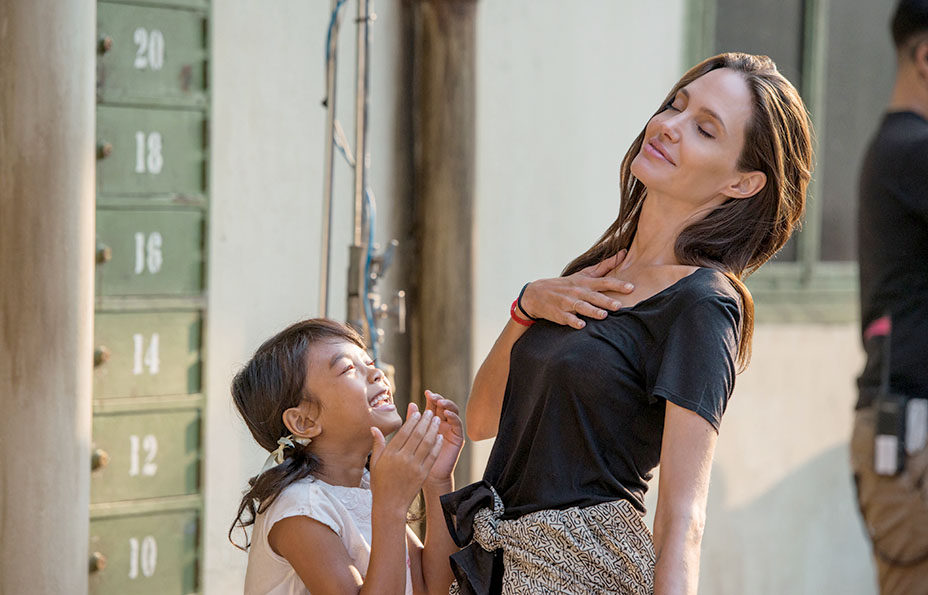 The actress happened to be in Cambodia filming her first Tomb Raider movie when Ung’s memoir was published, and Jolie called her out of the blue. The women met in the city of Battambang, where Jolie now has a home and a nonprofit organization. “We [were working] on returned refugees and de-mining,” says Jolie, 42, noting that land mines were left scattered across the country after the Khmer Rouge’s fall in 1979. “We would meet with different schools and victims. And at one point, we said, ‘Let’s go into the countryside and see and learn.’ “

The companions took off on motorbikes, wading through streams, where Ung “taught me how to do a leech-check and catch frogs,” recalls Jolie. At one point, they were trapped by a monsoon and took shelter in hammocks under trees. “We spoke [deep] into the night,” says Ung. “And I was very struck when [Jolie mentioned] wanting to adopt a Cambodian child and asked how did I feel about that.” 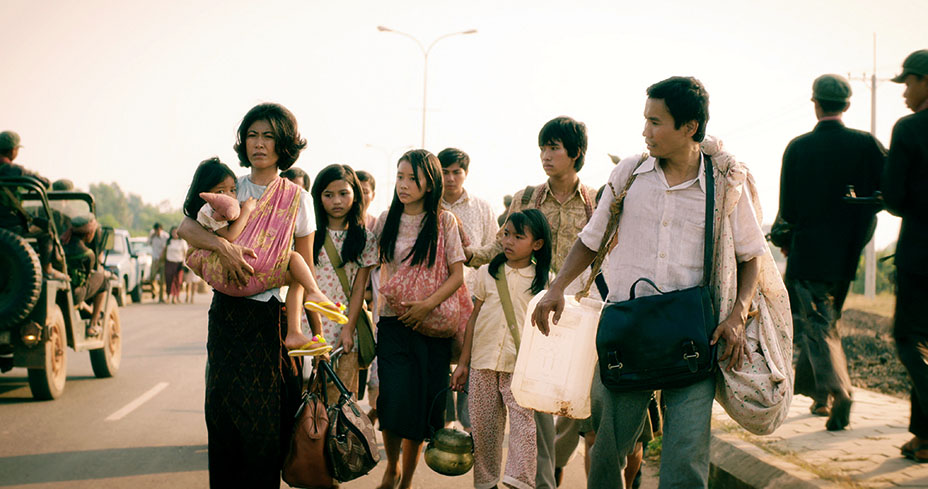 Their time together, as well as Jolie’s incipient love of Cambodia and her decision to adopt a baby (Maddox Jolie-Pitt, now 16, is a producer of the film), paved the way for Jolie to turn Ung’s memoir into a movie. But at this early stage, she admits, the notion of directing hadn’t crossed her mind. “I was raised to be an actress,” she explains. “There wasn’t ever a thought of, ‘You should be a director.’ Even in my very progressive family, my brother was encouraged to go to directing school, and I was encouraged to act.”

After her first venture behind the camera with 2011’s In the Land of Blood and Honey, however, she “realized I really enjoyed directing, and then I thought of what’s important to me, and it was Loung’s book.”

Still, after the two had collaborated on the screenplay, Jolie delayed filming, determined not to shoot until Maddox was prepared to embark on that journey by her side. Instead, she went on to direct 2014’s Unbroken and 2015’s By the Sea, until, well into his teens, Maddox told her he was ready. At that point, she called Netflix chief content officer Ted Sarandos and asked him for the funding. “I thought it was going to be $12 million or $13 million,” she says, “and it ended up being $22 million,” some of it covered by Jolie herself. 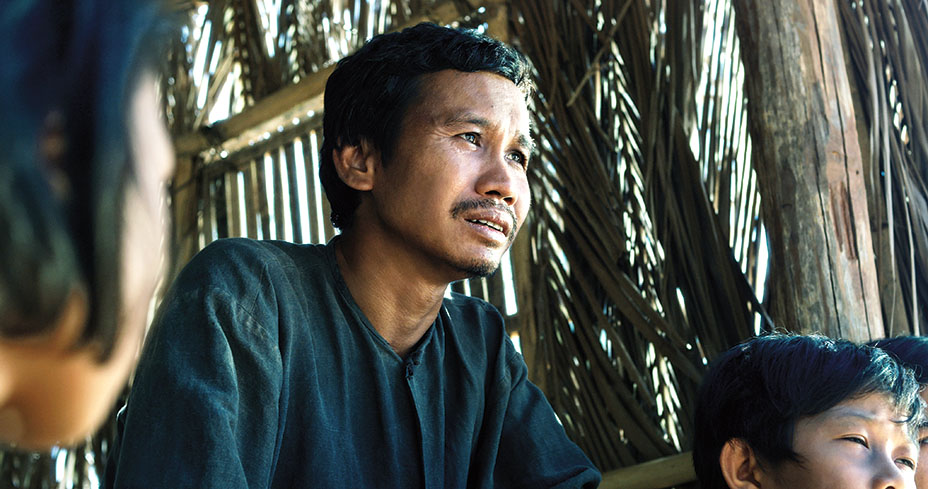 In November 2015, a 50-day shoot got underway in Cambodia, with Battambang standing in for Phnom Penh. Jolie was helped by local producer Rithy Panh, whose archive of documents and photographs proved invaluable, as did his memories of being a teenager during the Khmer Rouge years, when it came to providing details of life back then. “For instance,” says production designer Tom Brown, “people who had been handed over to the Khmer Rouge kept a spoon around their necks, because they never knew when they were going to eat. And people were told to go into the country to find vegetable dyes to take all the color out of their clothes and make them black. That’s in the movie.”

Details were one thing, logistics another when it came to filming in a country without a cinematic infrastructure. Equipment had to be shipped in from Thailand; extras hired, as many as 3,500 per day for the big scenes; rice fields were planted at different stages to convey time passing; special schools needed to be set up for the children; and some areas had to be swept clear of land mines. 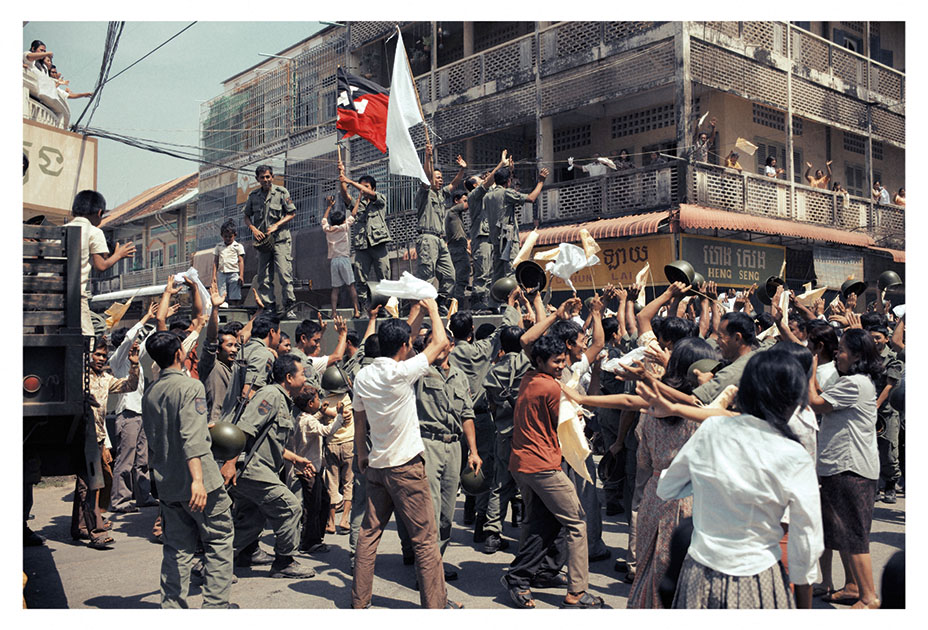 Then there were the reptiles and insects. “Tarantulas and snakes,” remembers Jolie. “We killed some snakes and ate some. That’s part of the culture; there’s a really good bug restaurant.” She and her family even learned how to cook reptiles.

Some key members of Jolie’s crew fell into place at the last minute, including Oscar-winning director of photography Anthony Dod Mantle (Slumdog Millionaire). His first job: “We had to [figure out] how to maintain this point-of-view idea,” he says, referring to Jolie’s wish that the movie at all times give the sense of experiencing the world through a child’s eyes. “The idea was to develop a small rig, which I could hold on one wrist in quite a stable way and do agile camera moves.” 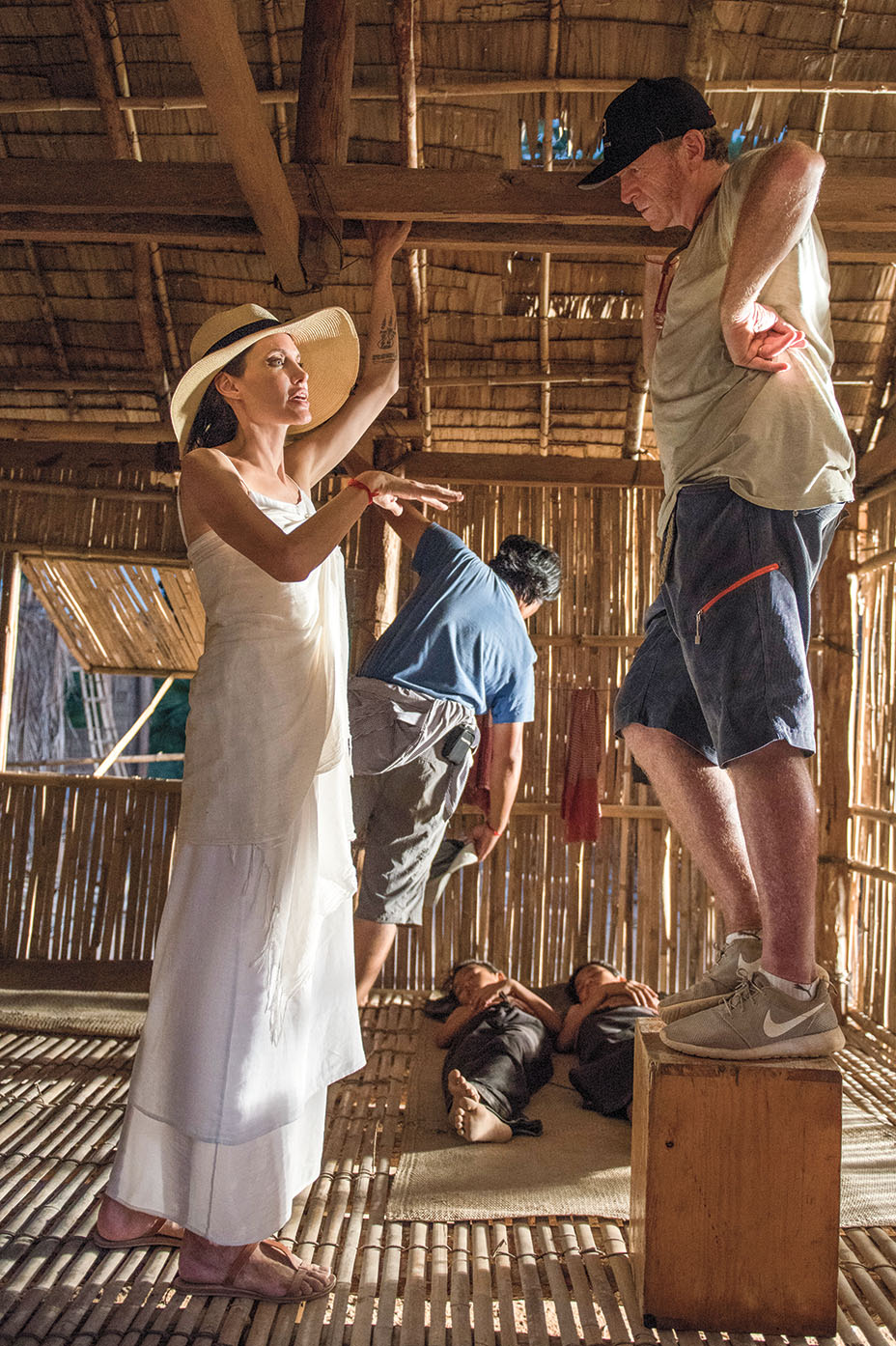 Filming in a jungle meant sickness undermined the best-laid plans. “We were shooting in immense heat, and there were people fainting, going down, vomiting,” says Mantle.

Just as hard as the physical challenges were the emotional ones. “A lot of the older people were victims of the war,” notes Jolie. “We realized early we needed a therapist on set.” She was acutely aware that many of the locals were not used to seeing film crews; some mistook the fictional for the real. “You had scenes where you had masses of Khmer Rouge soldiers with weapons walking down the street,” she says. “We had people fall to their knees, even though we tried to [warn them].” 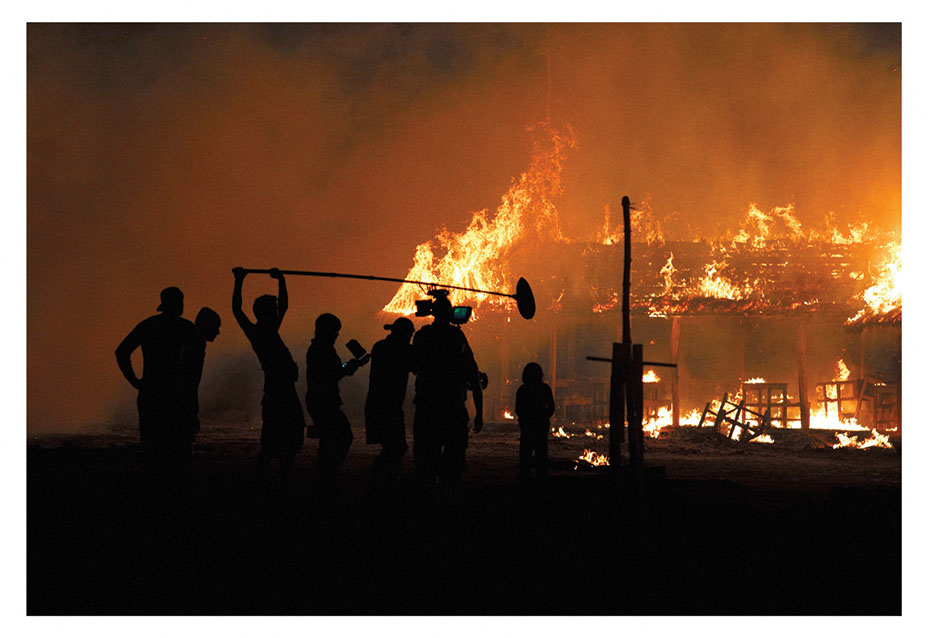 The director was anxious about how Sareum Srey Moch, a 9-year-old local girl cast as the young Ung, would handle some of the emotional scenes. “I told her, ‘Don’t ever make yourself laugh, don’t ever make yourself cry,’ ” says Jolie. “I want you to just listen and be, and you can never do anything wrong.” (Those interviewed for this article strongly rejected the claim that any children were emotionally exploited, as a Vanity Fair article alleged.)

For Ung, who had lived the story now being filmed, there was only one moment when her emotions ran away with her. “Surprisingly, it wasn’t the scenes of war,” she says. “The scene that tore me apart was the family sitting down for dinner. In my culture, every time you have a group celebration, you leave empty plates for the family members there in spirit. And then, to see a scene like that, where the family was just together around the same table, it was almost as if they came back to life.”