Next month, Dark Horse Comics will release the last comic work from Anthony Bourdain. It’s a collected edition that features previously unseen material from the late writer and chef, alongside horror stories he co-wrote with author and editor Joel Rose, who also contributes an extended dedication to his collaborator and friend.

The expanded version of Anthony Bourdain’s Hungry Ghosts — originally published in single issues earlier this year — reimagines the Japanese tradition of Hyakumonogatari Kaidankai with a particularly spooky twist, as a group of chefs tell a series of stories linked by the common themes of the supernatural and food, each illustrated by artists like Vanesa Del Rey, Francesco Francavilla and Paul Pope. Of course, like all good ghost stories, there’s a twist in the tale.

Heat Vision spoke to Rose about the origins of the book, his long relationship with Bourdain, and how the chef first approached him about an interest in comics.

Hungry Ghosts feels at once like a classic horror comic, complete with “hosts” telling each story, and also something that fits entirely into the life and career of Anthony Bourdain, with the humor and personality of each of the chefs coming across in each of the stories. What was the origin of the series? Did you and Anthony share a love of things like EC Comics or Tales From the Crypt?

I grew up on EC Comics and Tony loved them. That was the belly of the beast for us, where we wanted to live. The Crypt Keeper, the Old Witch — we were paying homage [in Hungry Ghosts]. Tony came to me with the idea. All the comics Tony and I worked on were his ideas. We had a good time working together. Pure fun for both of us. 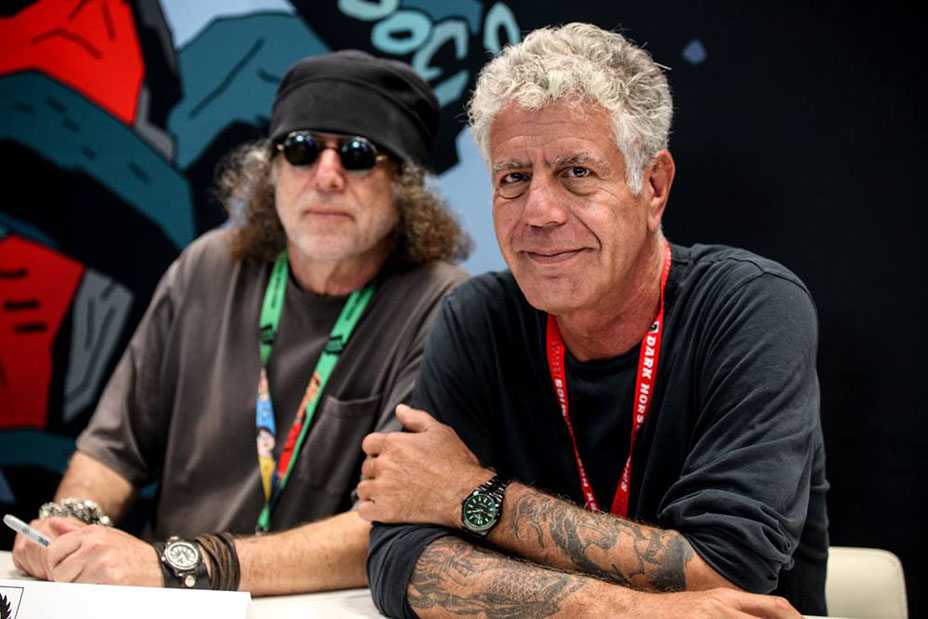 This was your third collaboration with Anthony Bourdain, following the two Get Jiro! books for DC Vertigo. How did the two of you originally hook up, and what was the collaborative process like between the two of you?

Not the first time I’m telling this story. I had this magazine in the ‘80s, Between C and D. It caused a stir. Tony sent me a submission, pages from a comic book he was writing and drawing. I sent him back a rejection letter saying the drawing sucked, but the writing was OK. Next thing I know this tall dude in chef whites, a little high from just having scored, shows up at my door. We were friends ever since. When we first met, he had no confidence. He wanted it, but didn’t know how to go about it. He was a natural writer, especially when he didn’t think about it. That’s how we worked together. A burst from me, a burst from him. We went back and forth. No pressure on either of us.

Without meaning to be too cynical or maudlin, what do you think you learned — and vice versa — from working with Bourdain? Are there things about your work that you can see his influence in?

We were friends. We’ve been through a lot. Where it ended up will always be a mystery to me. His influence on me? I remember being in L.A. for a book con, walking through the halls at the Coliseum or wherever, this was before anything crazy had happened to him, and he told me he was reading a book on how to be funny while public speaking. He said, use a lot of words that begin with K. I guess I’ll never forget that.

There’s such a variety of artists whose work shows up in Hungry Ghosts, reflecting the different stories being told. Did you know who was drawing each story ahead of time, and write toward the artist? The Paul Pope story, in particular, feels very Paul Pope-esque.

It worked both ways. Some of the stories we just wrote, looked for the artist afterward. But you’re right about the Paul Pope story. We wrote that with Paul in mind. One of the world’s great comic book artists, Paul did all four covers of Hungry Ghosts, and we definitely crafted this story, “Boil on the Belly,” for him. It’s the story of a mouth, at first mistaken for a blemish, that turns insatiable. It was the last story finished for the book and we thought Paul’s work on it alarmingly perfect. 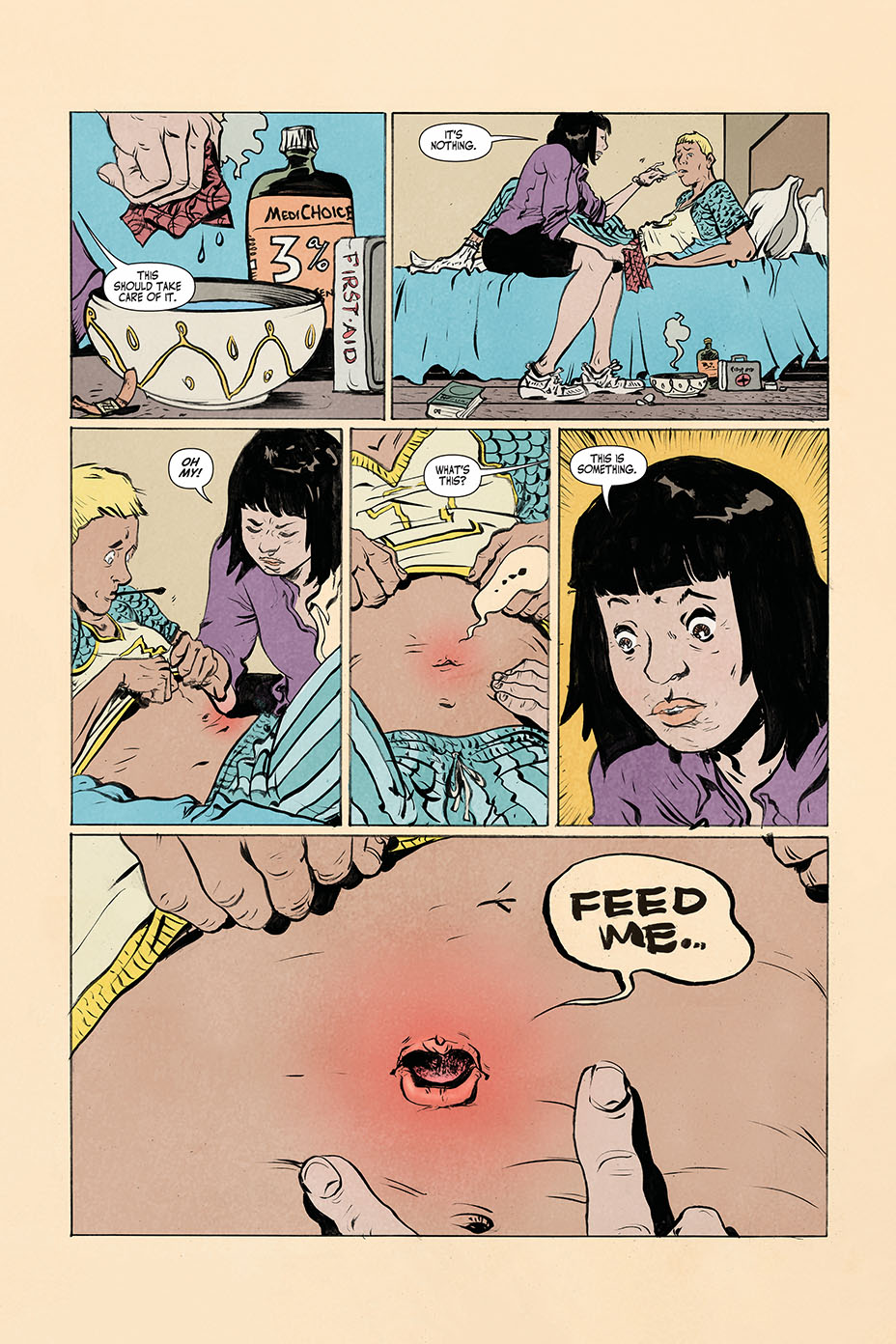 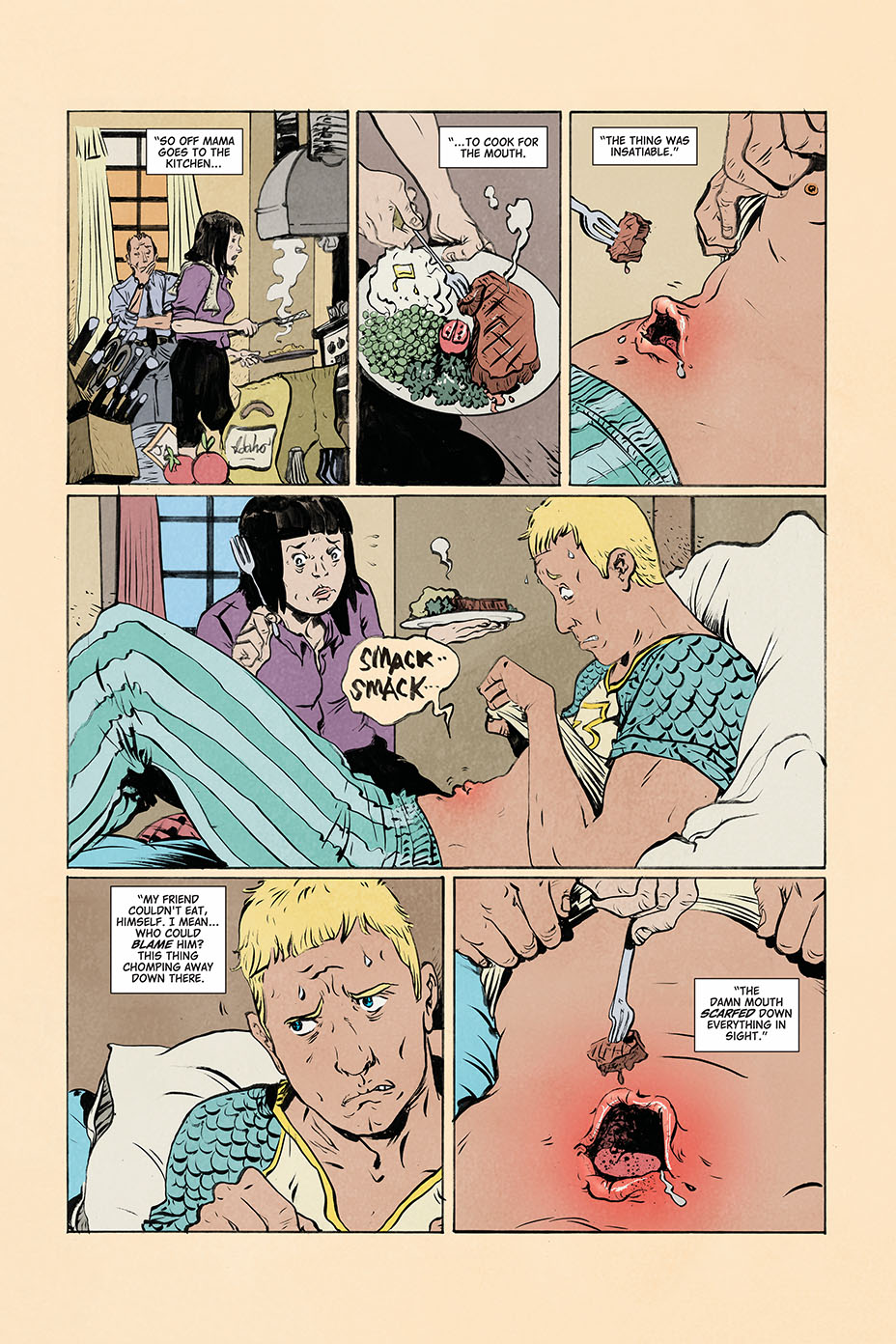 Hyakumonogatari Kaidankai, 100 Candles, was a samurai game, a test of courage. Tony told me about it with a lot of excitement. He had been on my case for a long time, wanting me to do Jiro, but this time I bit right away. I went to Lafcadio Hearn, his 1904 book, Kwaidan, and I was off to the races, down the rabbit hole to join Tony in another world.

Recently a friend put me onto the 1964 film Kwaidan, directed by Masaki Kobayashi, and a tweet by Guillermo del Toro in praise of the film. Del Toro tweets of the film’s “painterly beauty,” the “tremendous sense of loss.” The film is four stories and Hearn is credited as co-writer. I found it just as del Toro described it. To see it visualized this way, with the “perfect Takemitsu score, to which del Toro also alludes, was to bring me to a strange place. Astonishment, admiration, surely. Like Hearn, Kobayashi opened the door and invited me over the threshold, to let me see what I had seen, and to see it again anew.

You obviously worked in comics prior to working with Bourdain; do you have plans for new books already in the works?

Aside from loving comics as a kid and stealing a lot of them from the local candy store in order to get to read them, I got into comics pretty much by accident. Andy Helfer at DC contacted me. He had heard somewhere that the no-wave film director Amos Poe and I had an unproduced screenplay, La Pacifica, that was supposed to be pretty good. He asked me if I wanted to do it as a graphic novel for a new mystery imprint at DC. I did it, wrote the script, and he offered me a job editing the imprint. While I was there we did History of Violence, Road to Perdition, good stuff, but the line didn’t make it.

The great benefit was that was where I met Karen Berger. I brought the idea for Jiro to her, the idea for Hungry Ghosts, we work together really good.