The premise behind AHOY Comics’ new series Ash & Thorn may seem familiar on its surface: a protector is chosen to keep the world safe from supernatural threats, guided by an expert to watch over them and train them. There’s one difference, however: Lottie Thorn, the chosen one, is 80 years old.

Created by writer and editor Mariah McCourt (True Blood, Fables, Emily & The Strangers) and artist Soo Lee (Charlie’s Angels vs. The Bionic Woman, Mine!), Ash & Thorn is a series that re-examines some well-traveled ideas and finds new, unexpected directions to explore — but don’t mistake it for an outright parody.

The Hollywood Reporter talked to McCourt about the series, its influences, and the unexpected importance of pie recipes — no, really — accompanied by an extended preview of the first issue, courtesy of the publisher.

There’s something amazing, and amazingly immediate, about the high concept of “What if Buffy the Vampire Slayer, but she’s 80-years-old.” You’ve worked on the Buffy the Vampire Slayer property in the past — well, the Angel property, technically, at IDW Publishing — so I’m wondering: How direct was the inspiration for Ash & Thorn?

Ash & Thorn is, I hope, a very obvious homage and poke in the prophetic ribs to stories like Buffy. I love those stories, they were very influential for me, and they subverted tropes in their own way, with humor and horror and thoughtfulness. I wanted to take some of that, especially the “Chosen One,” and give it another spin, where it’s not about the horrors of adolescence or youth, but the experiences of age and the assumptions we have about what a hero is, does, looks like, etc.

I’m not being at all subtle about it and my intention from the first was for people to recognize the influences, tropes, and concepts I was using. And then hopefully be engrossed in how we subvert and play with them.

Talking about how you’re playing with expectations, one of the things I really liked about the book is that you’re not just playing the idea for laughs — there’s no “Oh, she’s supposed to do acrobatics, but she’s old!” punchline. How important to you is it that people understand that, while this is obviously a fun book, it’s not a book that’s making fun of older characters?

One of the things that I hope is really clear about the story is that we’re not making fun of older folks. While I get that the concept might imply that, that was never what I found funny about it or why I wanted to explore older women as protagonists in a horror/hero/humor story.

The characters are very self-aware and even self-deprecating, and there are elements about getting older that make the kind of physical heroics expected of a story like this more complicated, but that’s not really what heroism is anyway. Being able to punch really hard or jump really high is fine but in and of itself doesn’t make a hero. A hero is about character, about will, about doing what’s right and protecting those who are more vulnerable than you, and so much more. There’s heroism in small acts and big acts, in kindness and compassion.

In my life, older women have been the heroes, the activists, the artists, the people I’ve looked up to. So that’s where these characters came from.

I enjoy that Lottie subverts the expectations of a chosen one by being… well, not particularly into the idea, but also not refusing it outright, either. Ash & Thorn feels like something that’s well aware of the tropes, but not ready to lean into them. Is this your tastes as a reader coming into play here: wanting something that builds on genre, but does something new with it?

Lottie is kind of everything I’ve wanted to see explored in a “chosen one”. She’s 80, she’s an artist, she was a teacher and is still an activist in her community. She’s retired and wasn’t expecting or looking for a new adventure, especially not an apocalyptic one. But she rallies because that’s who she is. She doesn’t give up or give in, and she isn’t trying to “find herself” because she knows who she is.

She’s different than a younger character because she has a lifetime of experience to pull from; she’s not a teenager or just barely an adult, when your sense of self is still developing. So her arc is very different, about a different kind of attitude towards heroism and doing the right thing, when you thought you were “done” with that kind of thing and discover you aren’t. She’s subverting some obvious tropes just by being a “chosen one” in this context, a role generally given to the young, and by not coming from a background that we usually see for someone considered heroic. All of that is deliberate and, I hope, something new and different for readers.

There’s a suggestion in the first issue that things aren’t going right, or at least operating within traditional parameters, at least insofar as Lottie Thorn’s selection as the protector — or even Peruvia’s seeming inexperience with her own role. It suggests a level of world building that’s only hinted at — something also echoed in the scene in the underworld elsewhere. How deep have you gone in terms of planning the world(s) of Ash & Thorn?

Even though you don’t see it all, there’s a ton of world building in Ash & Thorn behind the scenes. I needed Lottie and Peruvia to feel grounded in something like our reality so that the shifts are believable and unsettling in ways familiar and not so familiar.

I use a lot of cosmic horror elements in this series and it gets progressively weirder the further we delve into the mythology and specific types of magic. The universe in Ash & Thorn is struggling, it’s having a meltdown or a mid-life crisis, and there’s a lot we haven’t seen yet that plays out over the full series and into the next, should we get a second “season”. There’s a reason baking and home arts are magical and important in the series, for instance!

Because you mentioned it — there are recipes in each issue of the series! AHOY had been running extras in their single issues for awhile, but the idea that the creative team of the book is basically offering up suggested taste pairings for their story feels really new. Have you been waiting to bust out the gingerbread recipe for awhile, and this felt like the best option to do so?

Beyond getting to tell this story at all, I’m so grateful to AHOY for the support and having so much with the series. Including recipes — and they’re all real — was so much fun. Baking features a lot in the series for both character and thematic reasons and it’s something I personally enjoy a lot. It’s not something you get to really share in horror comics, what kind of pie or cookie would go best with your monster or your hero, so I’ve really enjoyed picking the recipes that fit each issue the best. Each issues’ recipes are, in fact, story and theme relevant. And that’s not something I ever thought I’d get to do for a comic I wrote.

It’s not just that you’re writing the recipes; they’re illustrated by Soo Lee, the artist on the series, as well; talk about Soo’s contribution as the co-creator and artist on the title. What did she bring that surprised you? What would have been different had she never gotten involved?

I feel so lucky to have an artist like Soo, with colors by Pippa [Bowland], on this book, but humor/horror is difficult to convey. Without the right balance of tones the humor will fall flat or the horror will be silly. Soo handles that perfectly, weaving in and out of those elements like it’s second nature. Without her on the book I don’t think all the weird, eclectic tropes and themes and emotional nuances would work together so well. 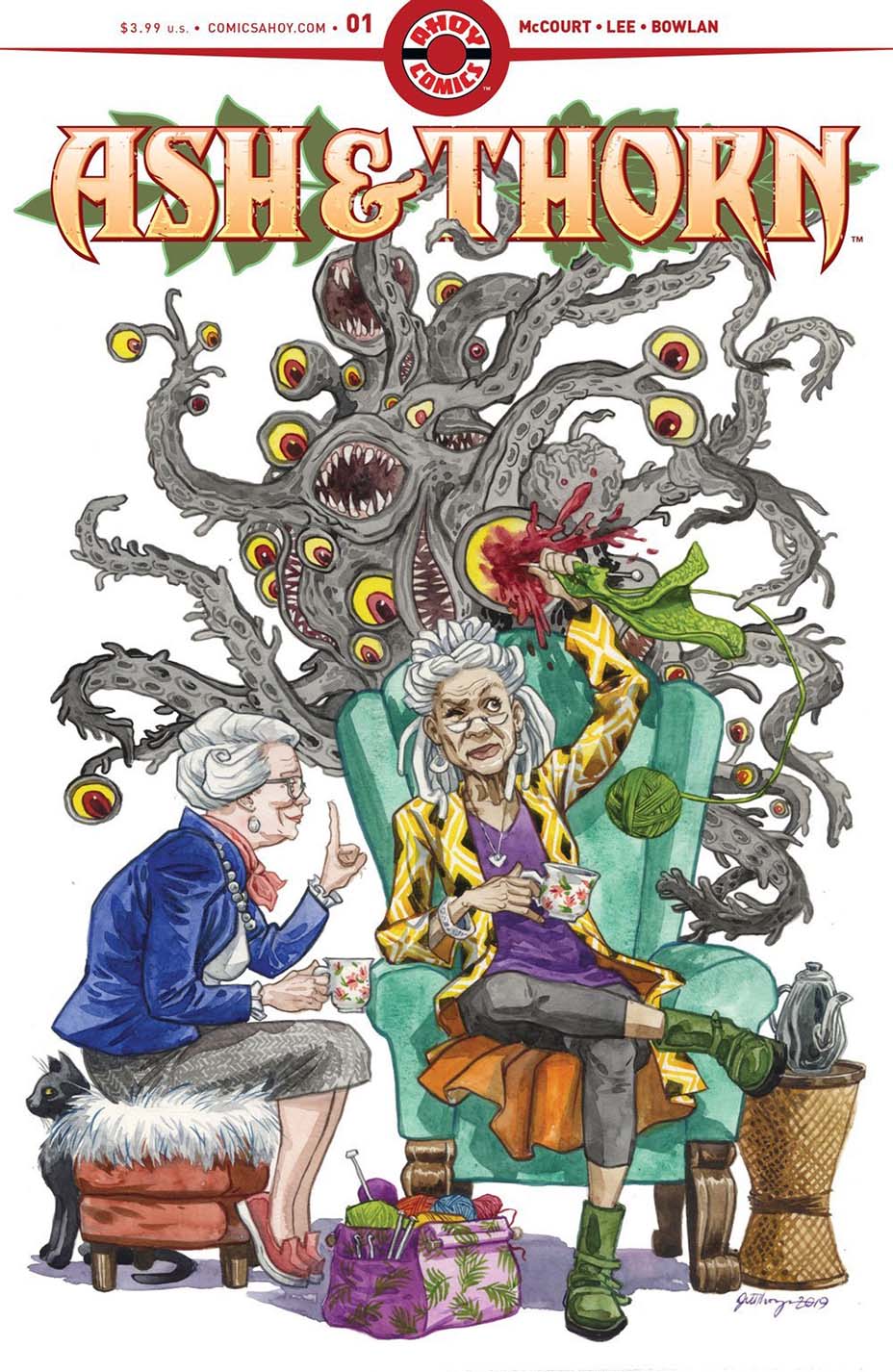 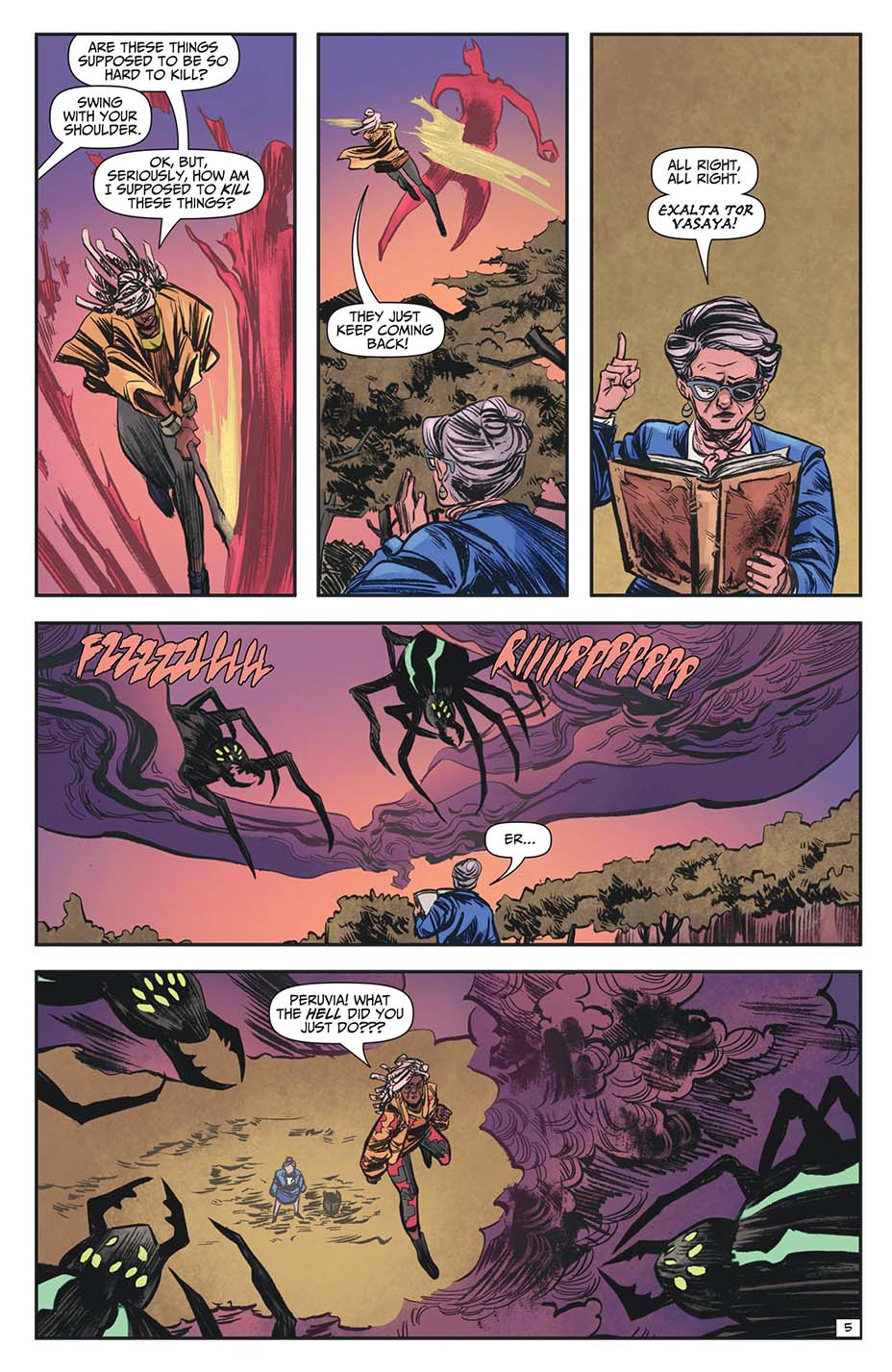 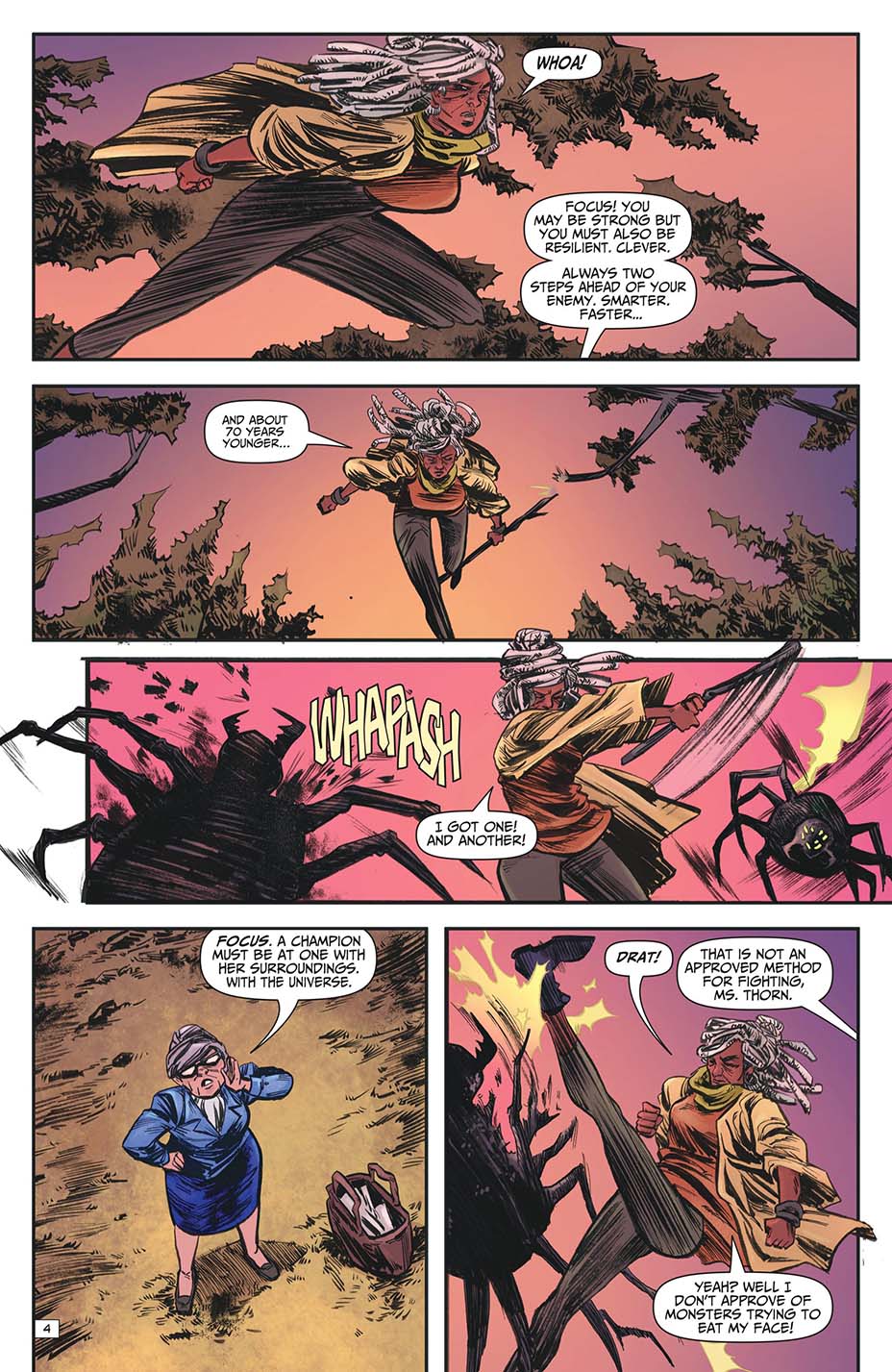 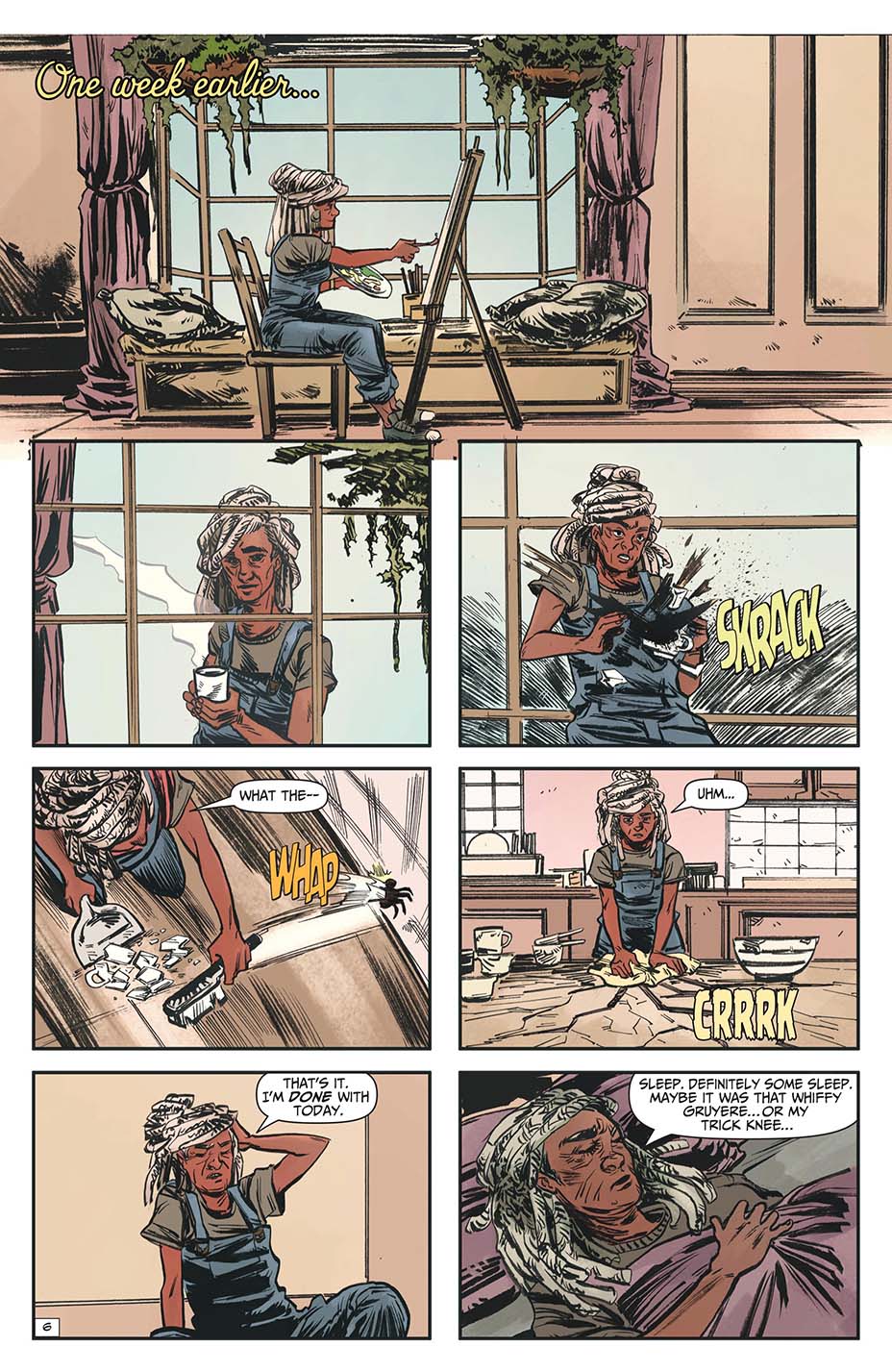 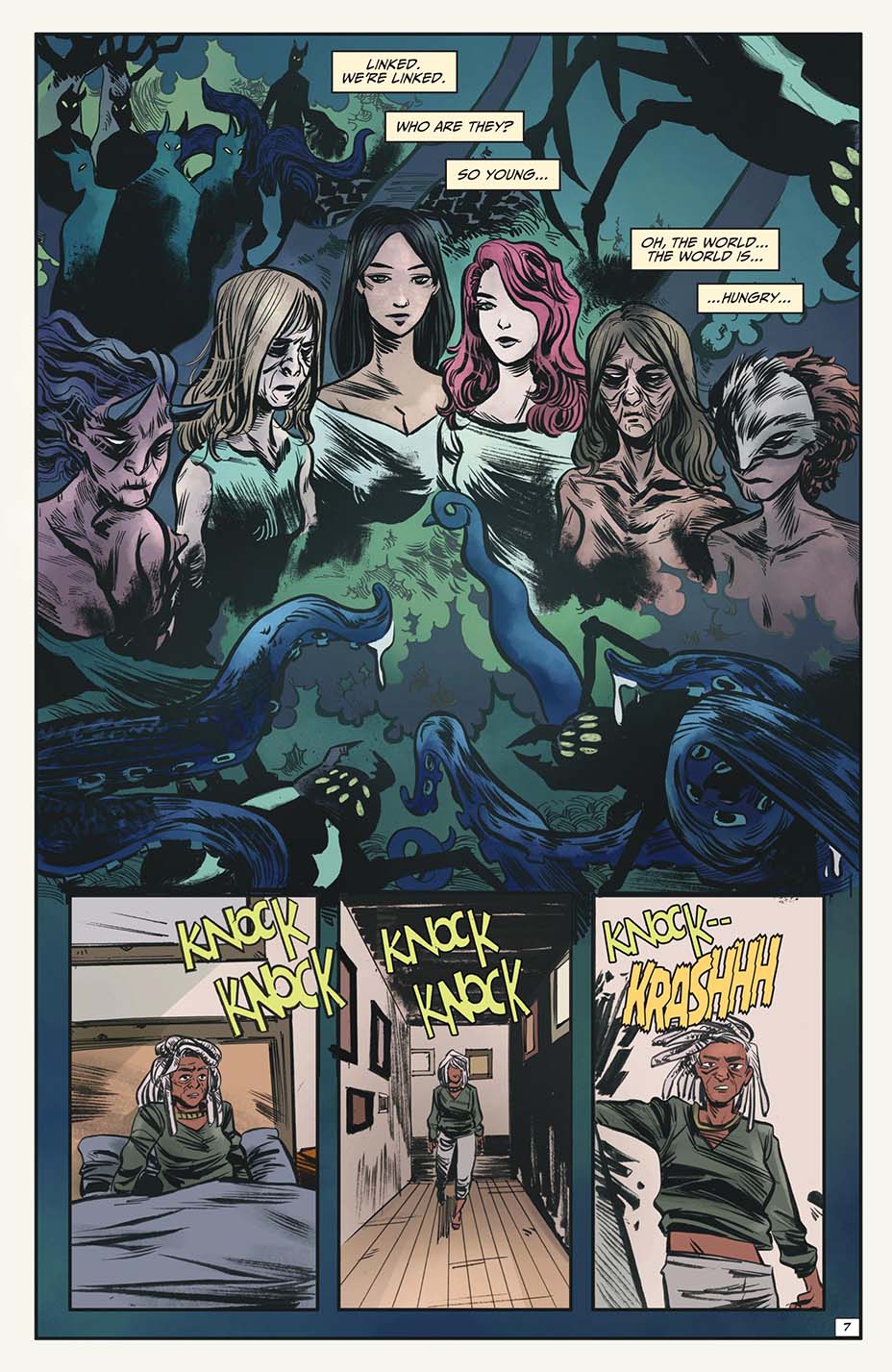 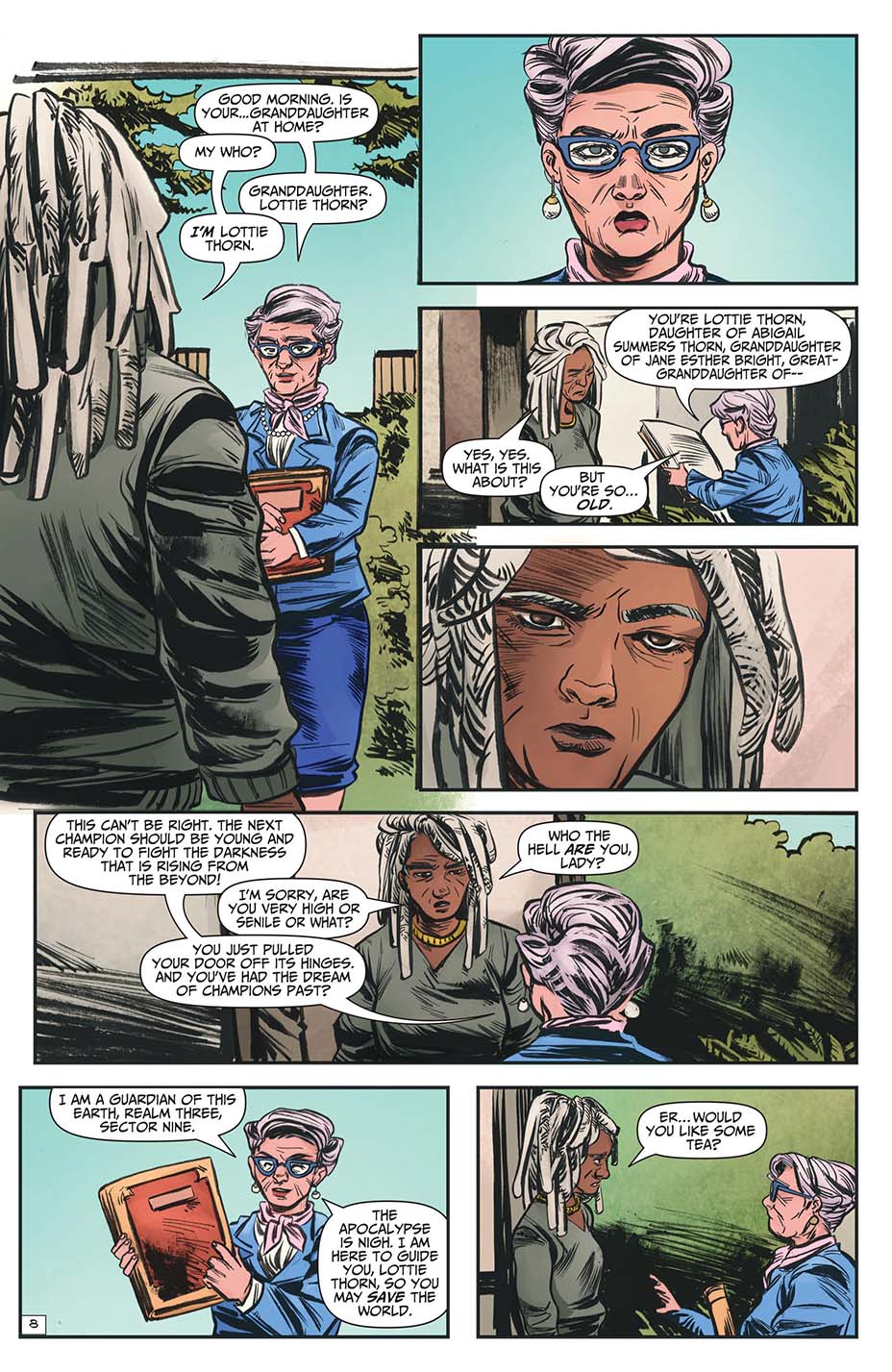 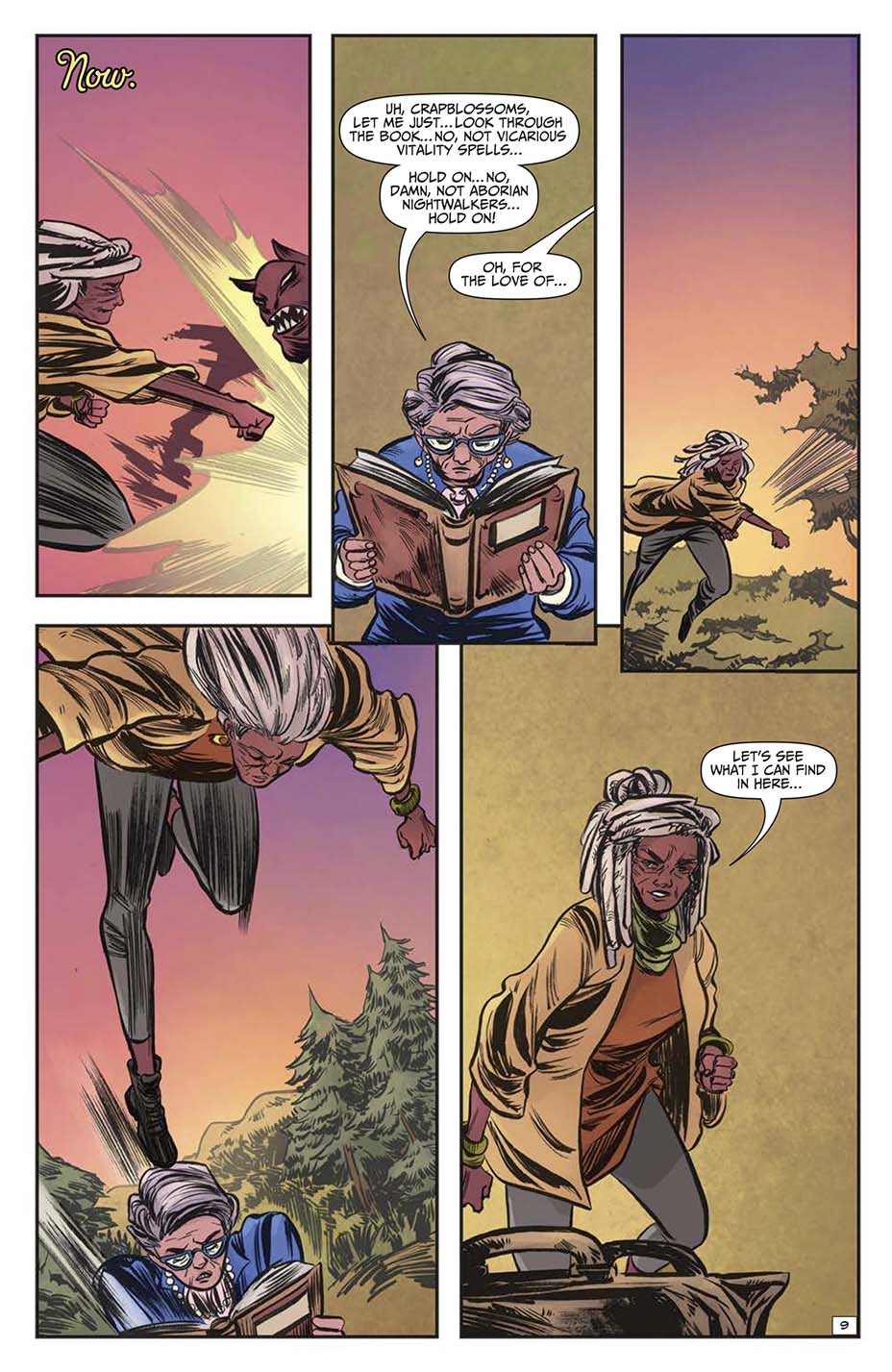 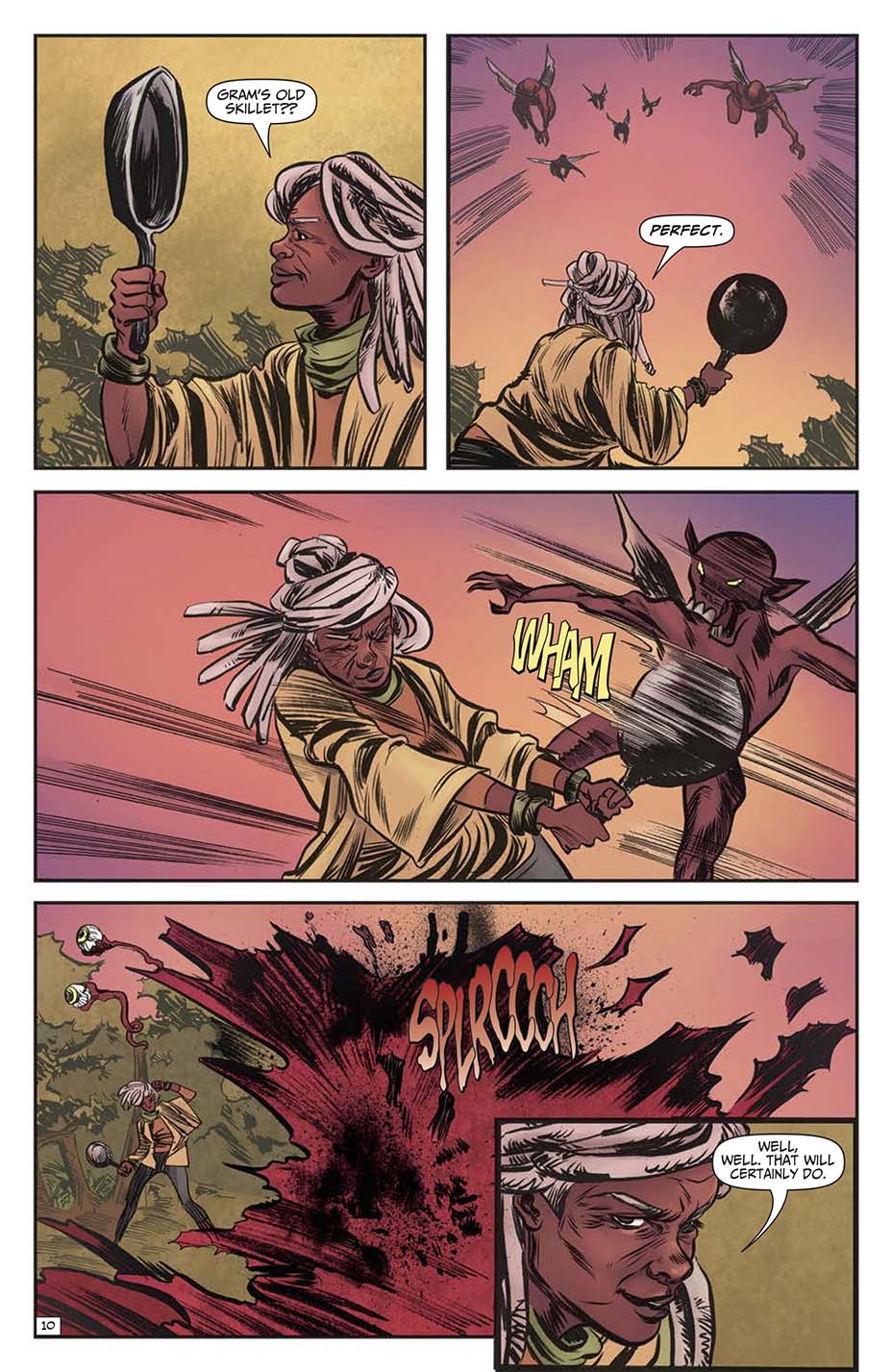 Ash & Thorn No. 1 is available digitally and in comic book stores today.