For many, the name Barbarella conjures images of Jane Fonda floating across the screen in the camp, iconic classic from the 1968 movie. In reality, the character had existed years earlier, being created by French cartoonist Jean-Claude Forest for V Magazine in 1962.

The comic book exploits of the intergalactic agent caused quite a stir at the time, thanks to the then-groundbreaking sexual nature — in actuality, heavy innuendo — of the stories, being decried as pornographic in some quarters and held up as figureheads of the sexual revolution in others. Almost six decades later, American audiences will have a chance to decide for themselves thanks to a new edition from Humanoids, with dialogue from Bitch Planet’s Kelly Sue DeConnick.

William G. Borchert, Emmy-Nominated Screenwriter of 'My Name Is Bill W.,' Dies at 89

Ahead of the new book’s release on Oct. 20, The Hollywood Reporter talked to DeConnick about her work on the book, the peculiarities of translation and adaptation work, and the strengths of the comic book medium as a whole. (A preview from the book, one of two volumes of the series DeConnick has worked on, follows the interview.)

Barbarella is something that most people know from the 1968 Roger Vadim movie, more than Jean-Claude Forest’s original comic, even though there had been an English language version of that in the past, before you worked on this new translation.

What I did was basically just revisiting it from a little bit of a more contemporary perspective: trying to maintain the author’s intention, but just update the verbiage and that sort of things.

I think you’re underplaying what you did, because you did two things that I think are really interesting, and I kind of wanted to ask you about both of them. Firstly, you gave Barbarella more agency — she’s very passive in the original, or in the original English translation, at least. You give her more agency; she’s more present. Things don’t happen to her. She was very much an object in the earlier English language version.

It’s such a tricky job, this job of whatever it is that that we do. You know, anybody can do a translation, but language is not math, right? And so there is no one-to-one. I did a ton of Japanese manga adaptations, and I’m comfortable with the term adaptation because it feels like, “okay, all the cards are on the table,” right?

There will be frequently in like the otaku community be a lot of discussion about, “well, did you read it in a literal translation?” and there’s an implied authenticity. What the fuck is a “literal translation”? You can’t do a word to word; there’s subjectivity in language, there just is. This is not an exact science. You have to intuit some of what the author’s intent was, and what you’re trying to do, if you do it well.

Ideally, your hand is invisible, and it doesn’t read like your style. That’s the goal, so my goal is to not go in and make all of these things sound Kelly Sue wrote them, right? The goal is to go in, do some research outside of the actual text, look at what you think is — as near as you can determine and intuit — what their intention was, and try to get the same reaction from the reader in English as they were looking for from the reader in their native language. That is how I approach it anyway.

And in updating the language choices, we weren’t trying to remove it from the period in which it was written, but rather to remove a layer of disconnect provided just by that time. So that was the goal. I mean, even though I do certainly prefer female characters to have agency, I don’t know why! (Laughs.) But even though that is certainly what I prefer in everything that I read, my goal wasn’t to come in and provide what wasn’t there.

But I think that was his intention. I think he was trying to write a “modern, liberated woman,” you know, who had command of her sexuality. But I think that at the time, the language and the dialogue that we were sort of comfortable with, wasn’t where we are now, so what was really progressive for the time doesn’t read progressive now. I was trying to, not change it so much as restore that. Does that make sense?

Yeah, and that actually ties in with the other thing that I think is fascinating is Barbarella is such a weird book.

Delightfully! I think anybody who’s seen the movie and thinks they know what Barbarella is…! Like, oh, baby.

And you write into the weird, which is what I love. You lean into it, in a way that I think a lot of other people might have tried to, I don’t know if normalize is the right word, but sort of tone it down or trying to explain it more. You literally just lean into it.

Isn’t that the joy of comics?

No, it is. But I do think that, especially for a work that is — I mean, Barbarella is a wonderful comic, but it also feels very much of a time. It’s a dated work.

You’re clearly enjoying that it is weird, you’re embracing that and your dialogue makes it clear: “this is great, it makes no sense, it’s ridiculous.”

You know, that might be a product of where we are right now with comics. Where I have a growing concern that we are losing this thing that makes us valuable.

Yes. No, let me not say medium, let me say as an industry, because I think what it is a medium is unchangeable, in that the medium is infinitely flexible. Well, perhaps not infinitely, but almost.

The thing is, you know, as we are becoming parts of larger corporate families, they buy us up because of our value. Because we’re innovators. And we are innovators because we are fast and cheap, and so we can afford to be experimental, we can afford to blow off traditional three act structure as often as we like, to try to reinvent it, to play with the differences between how time is portrayed in a comic. Our medium is so unique in the way that we use physical space to communicate time.

I have made the argument so many times that I think comics, which are so often identified with high action because of the dominant genre, and because of the lack of budgetary constraints — you know, you can draw whatever you want, it costs the same — I think the thing our medium does better than literally any other is stillness. The only one that can come close is the poem. There’s nothing that can can convey stillness, quietness, loneliness — like, three panels where nothing changes, but the light. Only we can do that.

I’ve gotten a little bit off of my thread here. But I think that what’s happened is these bigger companies have bought up comic publishers, and they see us as sort of, well, they should see us as R&D, but they don’t. They see us as intellectual property machines. They don’t value the right things, they don’t know what they bought.

And so we are becoming more about protecting pre-existing intellectual property, or generating potential franchises, than we are about innovating story. And that’s the value in what they bought, they bought something amazing. And if they only understood that, they’d stop trying to kill it. (Laughs.)

Oh, that’s a bitter laugh. Barbarella, as weird as it is, is a great demonstration of that, because Barbarella is weird, and it doesn’t make sense.

But it’s full of ideas!

And there’s, like, a million different books in those little ideas all throughout the pages.

It follows Forest’s interests. It goes wherever he wants to go next, which is something that comics can do in ways that other media can’t, at least as easily.

Yes, yes. But less and less. Because it’s because there seem to be exterior forces that are trying to make comics into proof of concept for movies.

Were you a fan of Barbarella before you took on this job? Was this something that you’d read?

Yeah, I only had read the first one, I had never read the second. I saw the movie, I think when I was in high school, or junior high…? My mom never policed anything that I consume, which is kind of great, actually. I’m not sure if that’s really bad parenting or really good parenting, but it worked out for me. I really do think my mom was like, “oh my god, you have to see Barbarella.” My mom sent me to see Rocky Horror, you know? She was always very like, “oh, no, have fun, is this is for young people. Go be a young person,” you know. So, anyway, I saw the movie and it was like, “well, that was bugfuck,” but I loved the look of it.

I think I had a hunger for something like, a — this is an odd comparison, but I think you’ll follow me — something like a James Bond for women.

Sure. That’s what Barbarella is. It’s James Bond in Space.

Something where she is the adventurer. She is the cool one. I think actually Modesty Blaise — but none of the adaptations — do the James Bond thing a little bit better than Barbarella, but I think that was the appeal of it for me at the time.

I did not read the comic until I was older. I didn’t know [the movie] was based on a comic at first. And then when I got this gig was when I read the second comic, and then I was like, “oh my god!” I love the second one so much. Because it’s everything that the first one is only more so the first one becomes progressively weirder as well. The first starts in the sort of, you know, very much of its time very mannered storytelling, and just gets progressively stranger as it goes on.

The book is definitely many times weirder than the film. And the film is strange! I really enjoy it, and I don’t enjoy it just as candy. There’s a lot there.

Was it fun? Was it a fun project to work on?

Oh, it absolutely was.

When I think of you, I think of Bitch Planet, I think of Pretty Deadly — I think of you doing your own work for want of a better way of putting it. I know that you’ve done work Marvel, you’re currently working for DC on Aquaman, but I think of you as someone who creates and writes your own concepts, so when I see you adapting Barbarella, I imagine it being almost a vacation in a strange way.

It was gleeful. Although I will say, I do remember kind of laughing at myself again in the second volume because of the sadness that hits her. I was affected by it. I felt it. And I remember being like, “oh, my God, you need sleep!” But, I think that that’s a testament to for us that, you know, Forest created a character I believe as a joke, but he ended up making something weird and wonderful that has a life. She has a soul. She has a truth about her at the middle of all of that insanity. 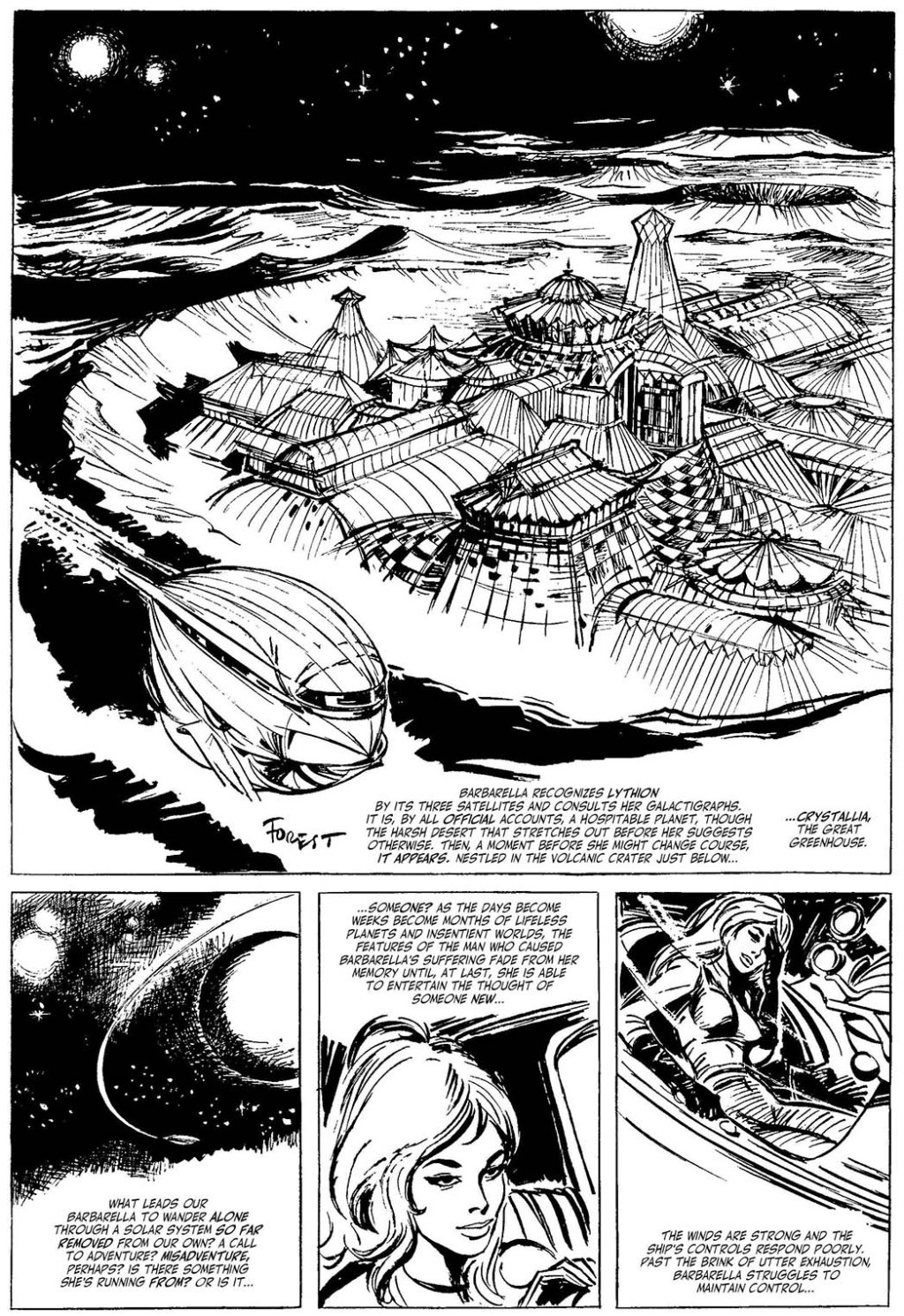 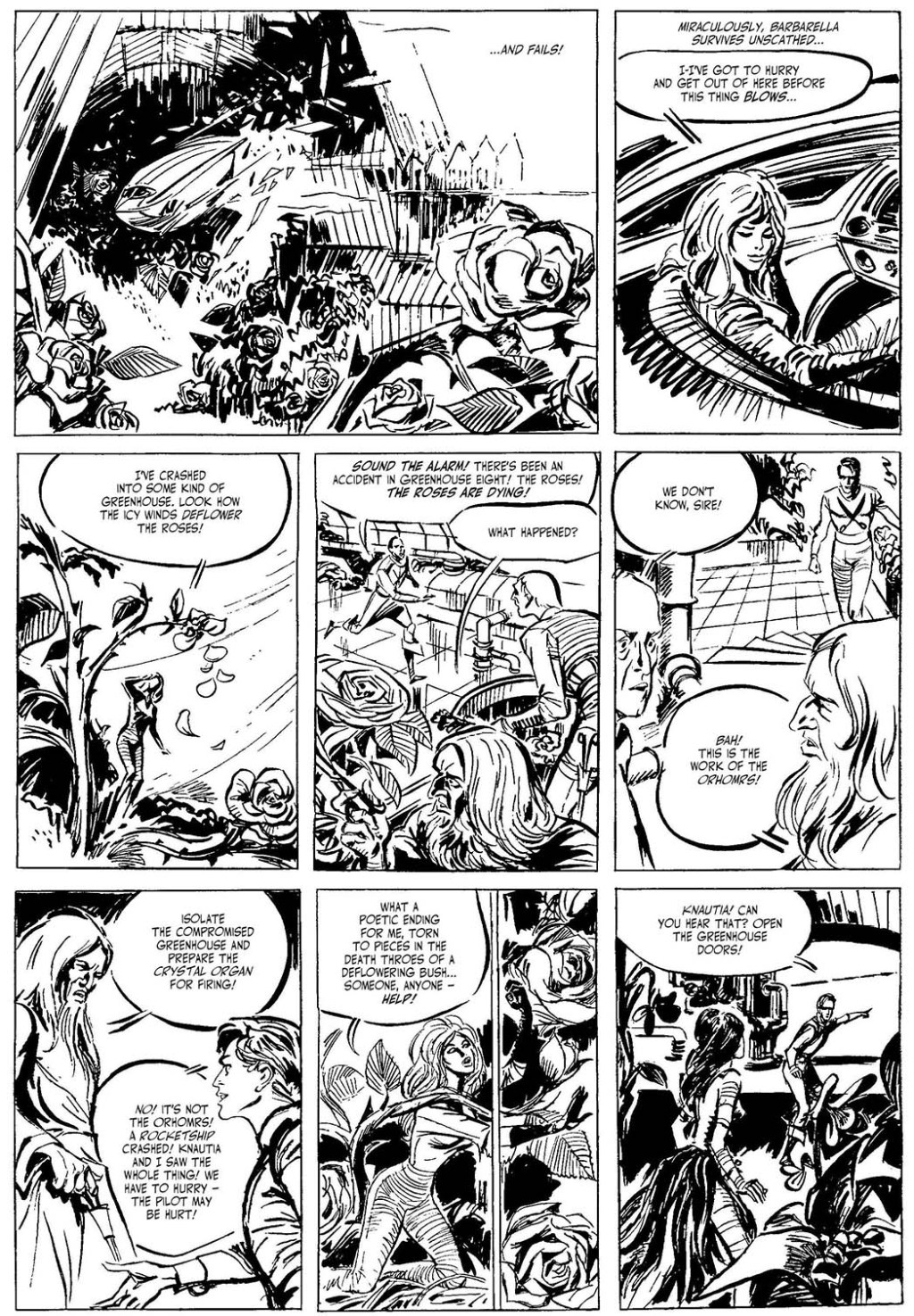 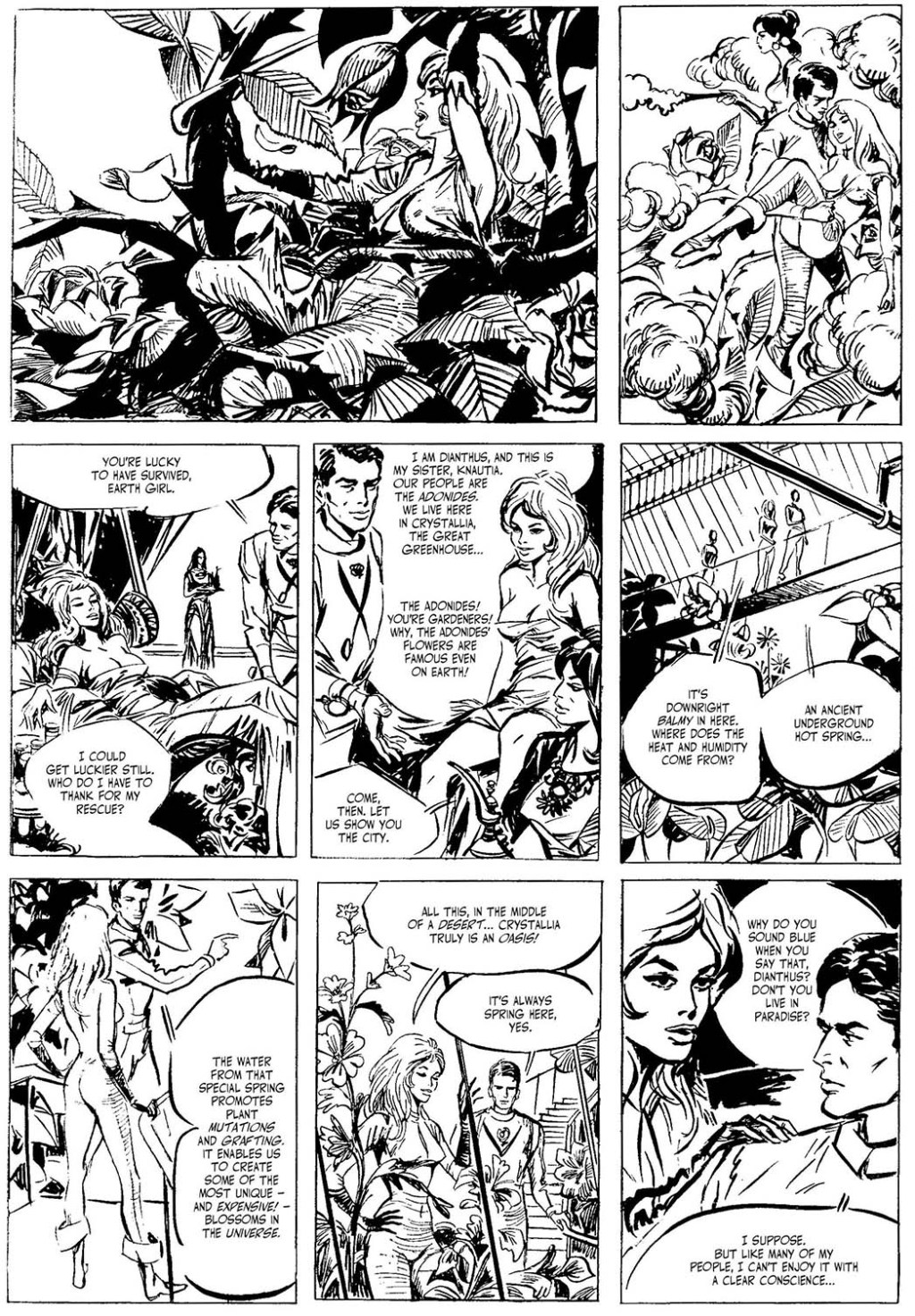 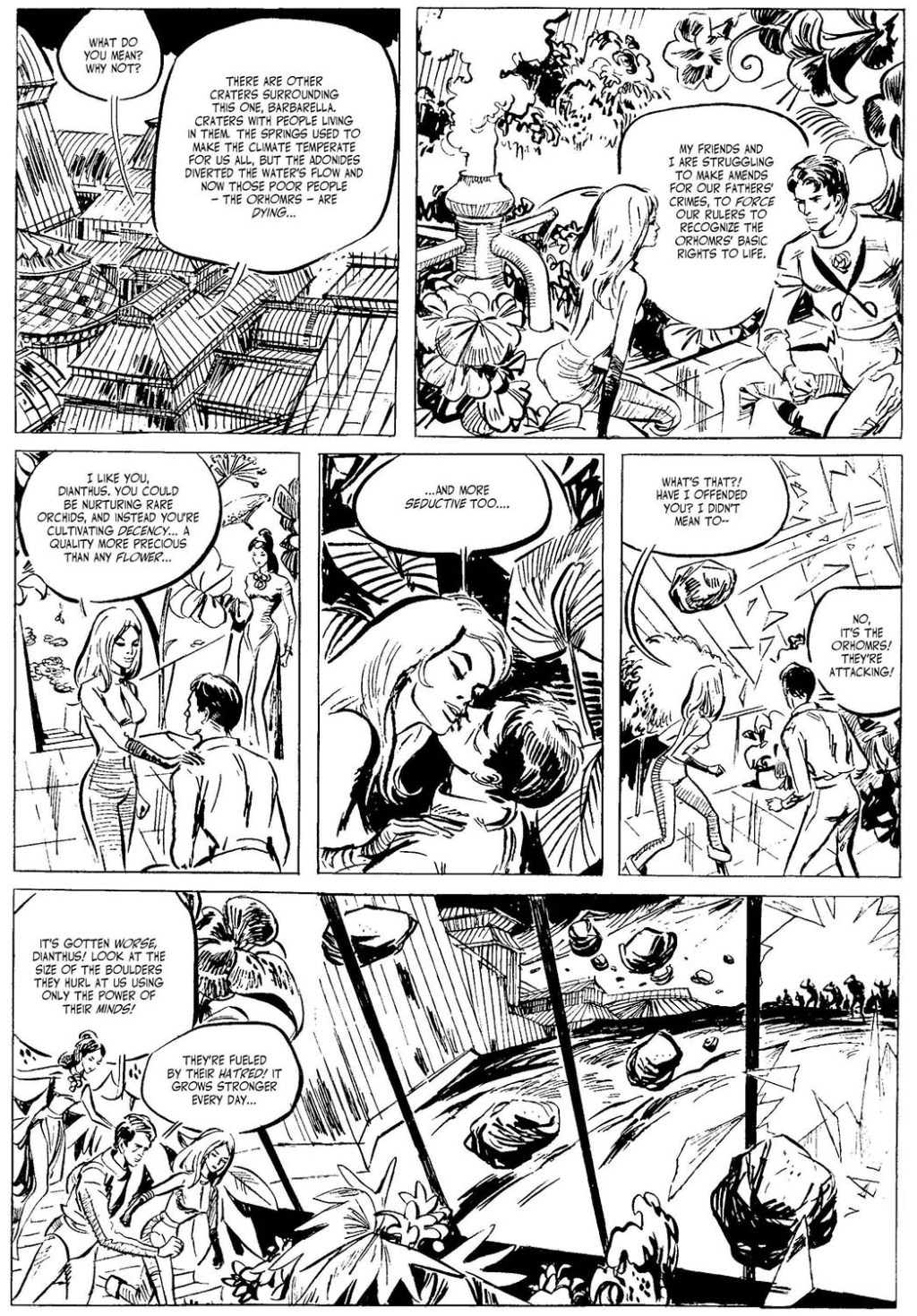 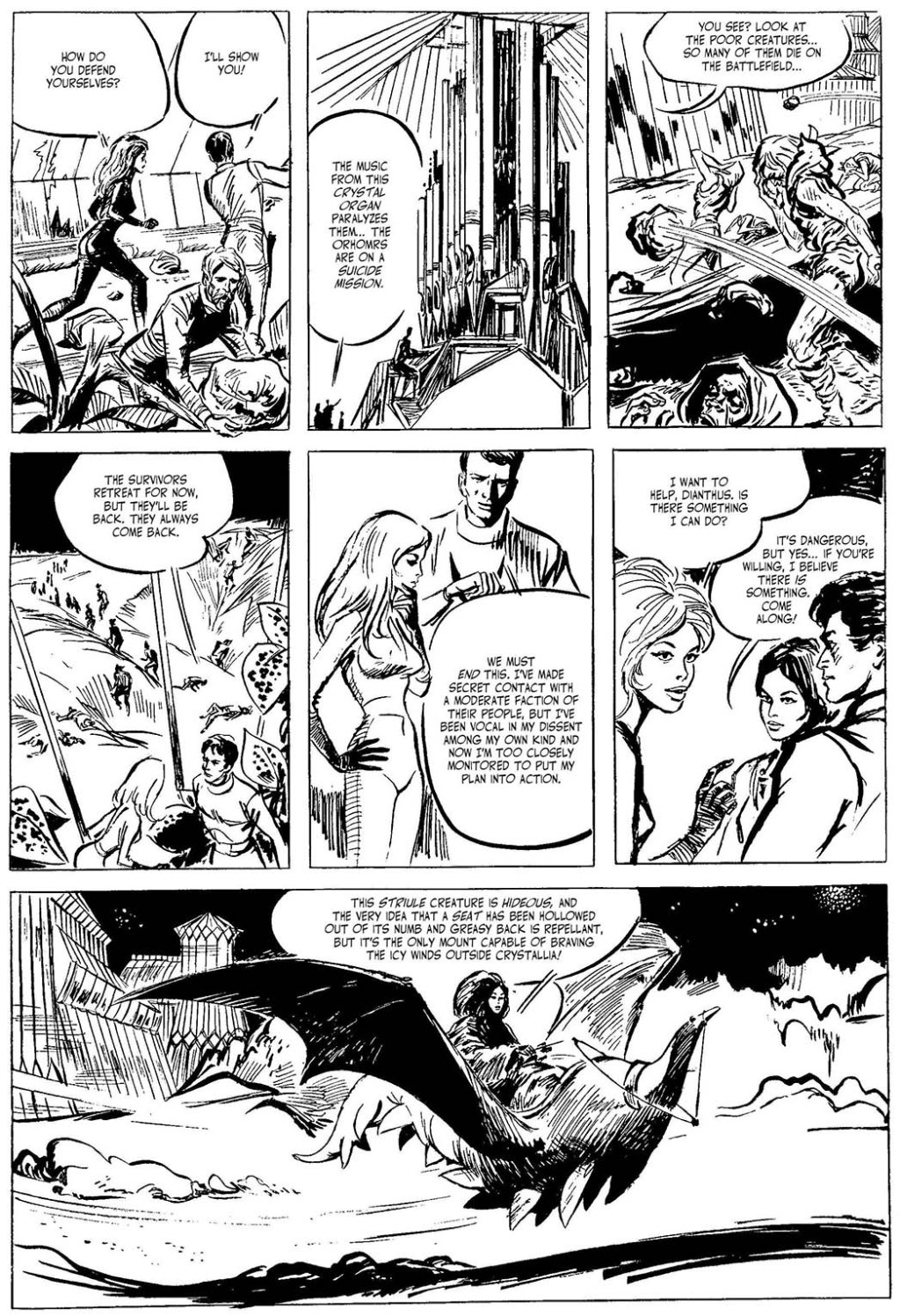 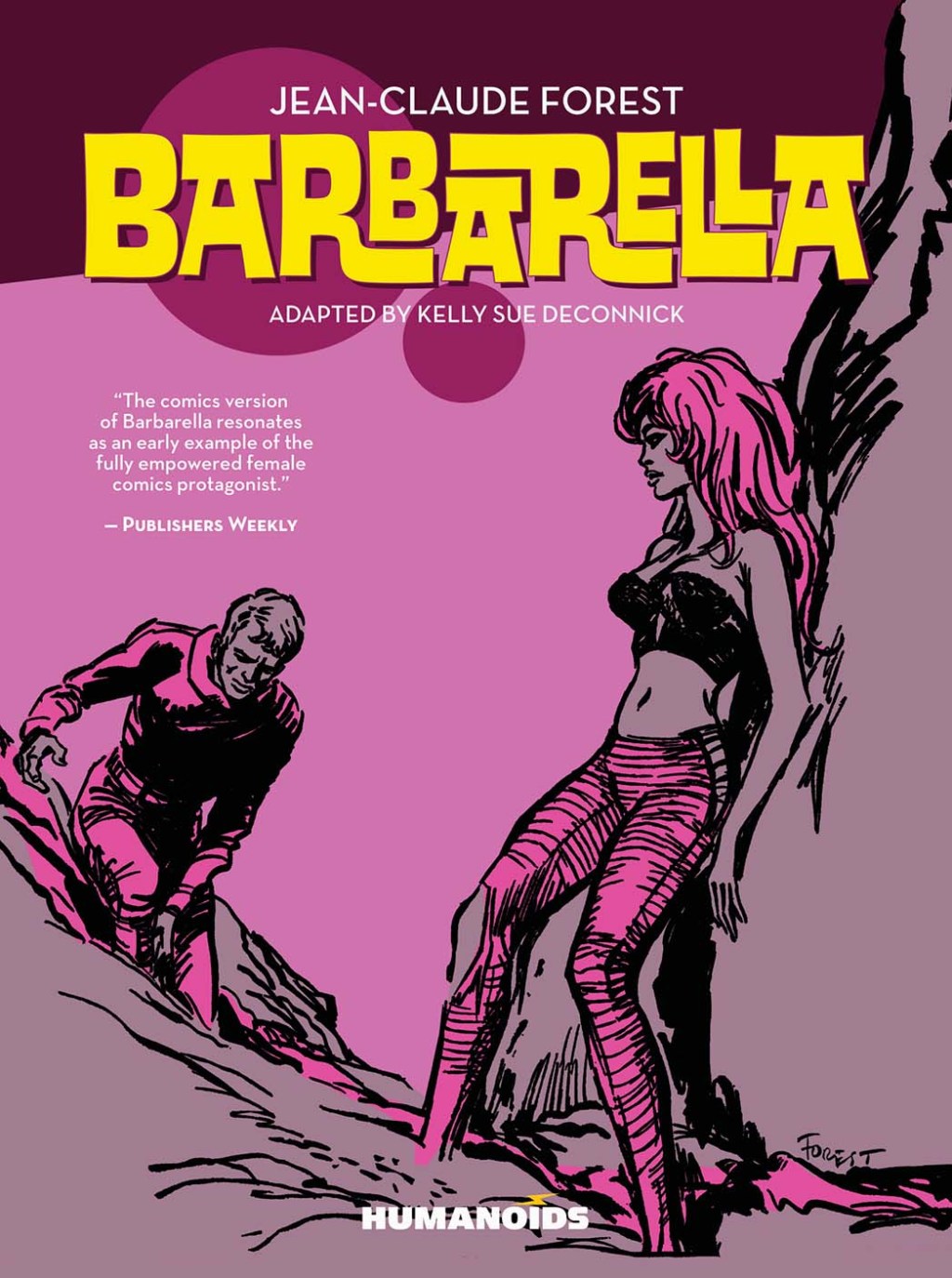