Continue to The Hollywood Reporter SKIP AD
You will be redirected back to your article in seconds
Skip to main content
February 18, 2020 2:25pm
Logo text

[This story contains spoilers for Birds of Prey.]

When Margot Robbie first picked up Harley Quinn’s baseball bat in 2016’s Suicide Squad, Birds of Prey star Ella Jay Basco wasn’t allowed to see the movie since she was just 9 years old. Now, three and a half years later, Basco is Harley Quinn’s sidekick in Birds of Prey, which still feels like a dream to the 13-year-old actor.

Much like Harley Quinn, Basco’s Cassandra Cain finds herself in the cross hairs of Roman Sionis (Ewan McGregor) after she pickpockets a diamond of great importance to him. The actor was well-prepared for this moment, since most of her training was related to pickpocketing.

“A magician from The Magic Castle came, and he taught me the culture of pickpocketing and how to pickpocket,” Basco tells The Hollywood Reporter. “During some of my scenes, he was my coach and trainer to really make sure we got a clean shot of me stealing.”

She even practiced her newly acquired pickpocketing skills on her uncle — Hook actor Dante Basco.

“When we had some family parties while I was shooting, I stole a wallet from my Uncle Dante, and he was freaking out,” Basco recalls. “It was cool because I realized I now had this skill.”

In a recent conversation with THR, Basco also discusses her first reaction to landing the role of Cassandra Cain, referencing Leon: The Professional and rehearsing being the “hot potato” during the film’s many action scenes.

I just watched Margot’s Hot Ones with you, and I don’t think I’ve seen someone suffer like she did on that show. How many wings did you end up eating on-/off-camera?

(Laughs.) I only ate one wing at the very end. I felt so bad for Margot; she ate like 10 wings. And Margot doesn’t even like spice, which is super crazy. Yeah, I only ate the hottest wing out of all of them. It was definitely intense.

To illustrate how quickly things change, what do you remember about the first time you saw Margot’s version of Harley Quinn in 2016?

I think I was about 8 or 9 years old, and since Suicide Squad was PG-13, I wasn’t really introduced to it until later in life. But, I totally saw the Halloween costumes. I remember going with my uncle [Dante Basco] to a Comic-Con, and that year, everybody was dressed up as Harley Quinn. Everywhere I’d look, there were so many different versions of Harley Quinn. Now, to be with Harley Quinn — it’s crazy. 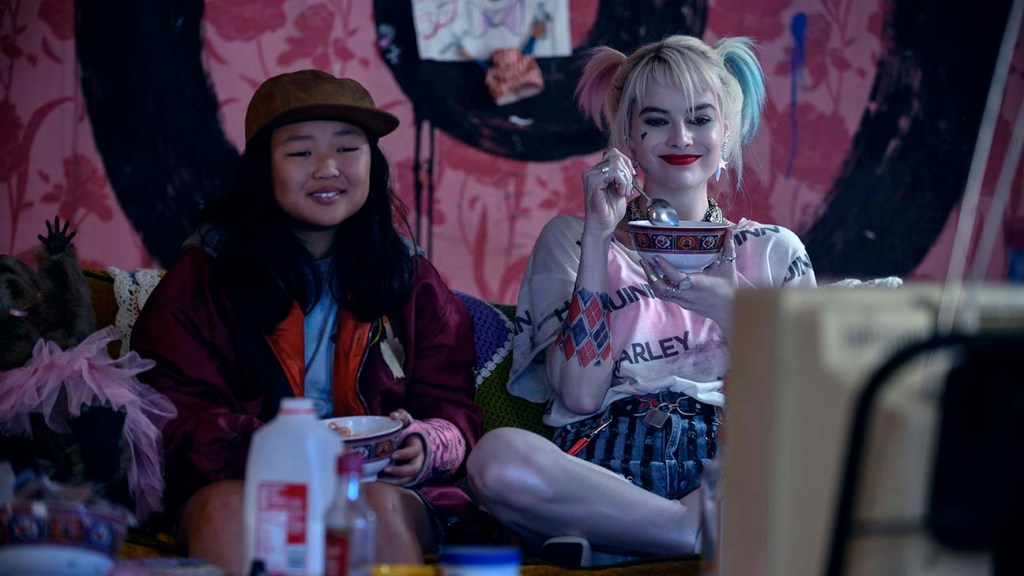 Yes, you are Harley’s sidekick and the focus of every character in Birds of Prey. Have you been on cloud nine since you first got the role?

I’ve absolutely been on cloud nine this entire time. It’s felt like one long dream, and I’m so sad that it has to end. This whole experience has been such a ride.

Was the casting process a six-month saga, or was it relatively quick?

The casting process, for me, was maybe a month long. I did chemistry reads with Margot and Jurnee [Smollett-Bell], and then a couple weeks after that whole monthlong process, they finally called with the news.

How was the news delivered to you?

Actually, my agent called, and as I was coming home from school, my parents were videotaping me, which I thought was the weirdest thing ever until my agent told me that I booked the role.

Obviously, your agent called your parents first so they could record the moment.

Definitely. My mom told me that when she got the call in her office, she started screaming like crazy and banging the table. She just couldn’t believe it.

Was your initial reaction something similar?

It was completely different. I was sitting in the car after school as my parents were videotaping, and I was kind of shaky. I honestly thought my parents were pranking me. (Laughs.) I couldn’t believe it. I wasn’t running in the streets, but it was that subtle, freaking-out, shaky, screaming-in-your-head kind of moment for me.

Who was the first person you told?

That night, after my parents told me, we had a big party to tell my entire family. They had no idea; I didn’t even tell my siblings until that night. It was super hard for my mom because she can’t really keep secrets. (Laughs.) So, that was when I told my entire family, and a couple months after, I told some of my friends at school. Then, the word just spread.

How did you make sense of all the Cassandra Cain material as you formed your version of the character? Did you pull bits and pieces from different storylines?

That reference makes a lot of sense the more I think about both films.

Thank you. It was actually Margot’s idea.

Did you have a pickpocket coach on set?

I did! That was actually the majority of my training. A magician [Roby Sobieski] from The Magic Castle came, and he taught me the culture of pickpocketing and how to pickpocket. During some of my scenes, he was my coach and trainer to really make sure we got a clean shot of me stealing.

Have you tried those skills around the house with your family or friends?

Yes, I actually did. When we had some family parties while I was shooting, I stole a wallet from my Uncle Dante, and he was freaking out. It was cool because I realized I now had this skill. 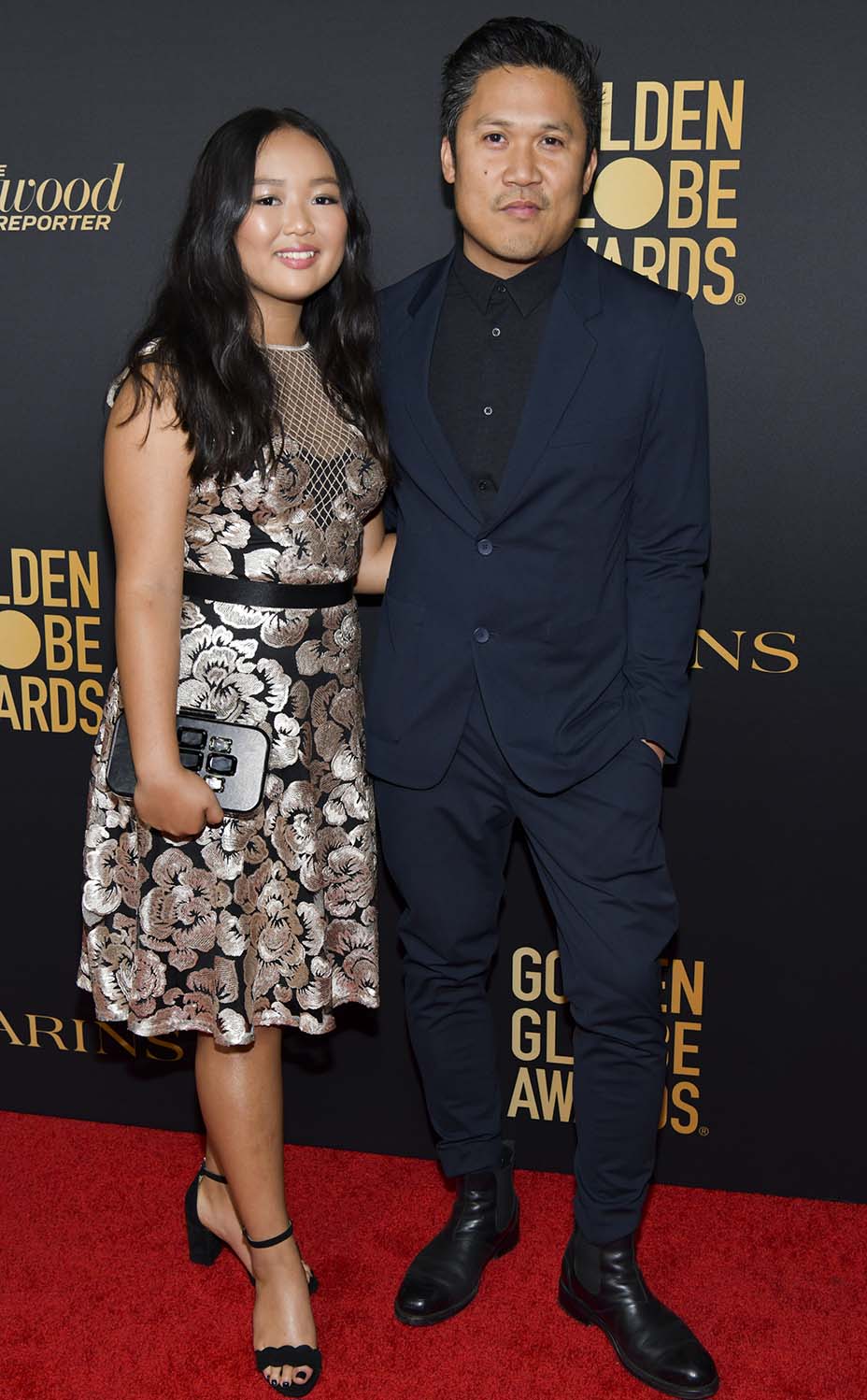 Speaking of Uncle Dante, did he give you any advice since he knows exactly what you’re going through?

He did! He understands me because he was a kid actor in this big family business. He pretty much told me to “just be 13” and to not let anyone tell me different because I’m still a kid. … He really just told me to be true to myself, be myself and make sure that I’m heard.

Did they have to remake Cassandra’s arm cast every day, or did it slide on and off?

When we first made the cast in the props department, they made it slightly bigger so it was easy to slip on and off. The cast is meant to be her container where she stores all of her jewels. She’s not actually injured; it’s just something she uses to help her steal and pickpocket.

Did you have to learn Margot’s choreography with her, since you would weave in and out of certain fights?

I did! We did some stunt training, and I did a lot of the rehearsals with Margot, as well as the other girls. I was the hot potato in a lot of those stunt scenes, being passed around from one person to another. So, we rehearsed a lot with Margot, the stunt team and my stunt double, Marissa Labog, who’s amazing, too.

The big fight at Booby Trap had you wandering across the battlefield as everyone fought around you. Did that sequence take a long time to get right?

We shot that whole scene for multiple days, up to weeks. We broke it down into parts and did different parts each day. That’s the scene that I want my friends to see most. It’ll be super cool for them to see how hard I worked on this project through all the crazy stunts.

Did you get to slide under that bad guy’s legs during the evidence room fight, or did your stunt double do that?

What were the particulars of the dynamite stick scene in the minivan?

That scene was shot for about two days because Margot and I do a lot of talking in that scene. So, we did about half of it one day, and the other half the next day. Cathy (Yan) and I really talked about how Cassandra Cain would react to certain things like that. It was either she was cool with it because she’s tough, or “what the heck?” because she’s still a child.

Was there a dog at Harley’s apartment that they made to look like a hyena? Or, was it CG?

It was both. They brought in a big German Shepherd, but Margot would sometimes have to pretend that there was a dog there — even though nothing was there. I think they blended the two together with some CGI for the dog’s face.

Did pieces of Black Mask land on you during the pier explosion moment?

No, that was a bit of CGI. I remember one day when we did that scene, the stunt double flipped over the pier, and they had this big water explosion. Then, they CGI-ed the whole thing, which was really cool to watch in person.

Since Margot transforms into Harley Quinn, to the point where she seems possessed by her, did you ever catch yourself admiring her performance in the middle of a scene?

Totally! That pretty much happened every day. Half the time I’d forget that she is Margot because I’d look at her and think, “Oh my God, I’m next to Harley Quinn.” I really admired her accent, costume and entire performance.

Were you an egg sandwich fan before this movie?

Yeah, that was interesting in and of itself.

Cassandra ends the movie as Harley’s apprentice, and she even dresses like her. Did you get to help pick out Cassandra’s new wardrobe?

Erin [Benach], the costume designer, is so smart and talented. We picked out the outfit together, what we liked and didn’t like and what fit well for the movie. We also decided that Cassandra needed a big jacket to hide her stuff, and things like that really helped while I was acting.

That last scene was really fun because that outfit was something shinier and more polished than what Cassandra normally wears. Every day, I wore the same outfit, so that day felt super different.

Since you shot in the spring, did you have to miss a lot of school in order to shoot the movie?

I did miss a good chunk of school, but I actually had a studio teacher on set, who helped me gain back that work.

Did you come back in September for the extra action scenes they shot?

I did! I was actually there for the majority of reshoots.

Based on everything that you read, is there a Cassandra Cain storyline that you’d love to perform someday?

I’d love to perform Cassandra Cain as the official Batgirl, or as the world’s greatest assassin, or even working with Oracle. This movie had more of Cassandra Cain’s origin story, and to see her live her life in Gotham would be super cool.

Lastly, what was the most surreal moment during this press tour?

Going to Brazil felt like a rock concert. The fans went crazy over anything we’d say. I had such an adrenaline rush, and that was the real moment when I realized that this was happening. It felt like we were The Beatles and all the fans were a bunch of 16-year-old girls. (Laughs.)

Birds of Prey is currently in theaters.