Prior to executing one of the biggest action sequences in Bloodshot, where multiple cars crash in a tunnel and Vin Diesel (playing a no-mercy killing machine) identifies his trembling target, first-time director Dave Wilson spent a weekend watching Russian dash cam footage for inspiration. They are “not pleasant,” he tells The Hollywood Reporter, prior to the film’s release. “[But] there was one where a bakery truck crashed into the side of a building and all this flour spills out. It was visually arresting. I wanted to make a whole scene like that, and it also fit into the iconic Bloodshot [comic book colors]: red and white.”

The result is one of the more eye-catching moments in Sony’s Bloodshot, the new superhero film based on the Valiant Comics character.

Since one can’t shut a working tunnel down for two weeks, the construction team built a tunnel-like set in South Africa, Wilson’s home country and where the majority of the movie was filmed. “It was tricky because there’s multiple lighting scenarios in there, and the reset time to comb all the flour down; lots of air hoses and ventilation systems,” explains Wilson, adding that they couldn’t actually use flour because it’s flammable. “It was a lot of fun.” He quickly clarifies: “It was very unpleasant, but I usually find that those filming situations bear the most interesting visuals.”

Those visuals tell the story of the changes slain soldier Ray Garrison (Diesel) goes through. In order to carry out the killing assignments of Dr. Emil Harting (Guy Pearce), Garrison is re-animated by nanotechnology with healing superpowers, which take the form of nanobots in his bloodstream. In deciding upon their look, Wilson, formally the creative director of Blur Studios with Deadpool’s Tim Miller, again danced between the pleasant and unpleasant.

“I always knew I wanted two modes; one was a cellular mode where [they] would seal up and, much like a red blood cell, move through his body throughout his circulatory system,” says Wilson. “But then they obviously needed to move independently and be able to heal him, so they would open up and crawl around. The big thing was, I didn’t want them to look like pleasant things everyone would want inside of them. I wanted them to be unpleasant, alien-like insect things in your body doing all sorts of unsavory things.”

As a longtime fan of science-fiction novels such as The Forever War, Snow Crash and The Stars My Destination, Wilson used that lens to approach the project as a whole. “What attracted me to the character was this idea of the illusion of choice, especially in the face of rampant technology as we’re faced with today,” Wilson says. “The idea that in the technology company, there is some logic beyond our control that distills a world of choices down to an itemized menu that we use to maintain some semblance of agency in our lives. I felt like the character was very much a personification of that dilemma.”

Referencing comic book artist Jeff Lemire’s run of the Bloodshot comics and fleshing out the material, Wilson goes on to say, “That memory manipulation and the fabrication of his past was very much [there], and it was a matter of tapping into a technological understanding that all of us are faced with.”

Growing up, Wilson was greatly influenced by movies such as Roland Emmerich’s Universal Soldier and Paul Verhoeven’s Robocop and Total Recall, in addition to “every movie that Tony Scott made.” Says the director, “From a filmmaking style, how he infused drama and character into action films, I always loved the way Tony told his stories.”

Wilson entered the directing field after deciding that “the lonely author thing was too daunting” and having an affinity for computer effects. “I remember when I went to college, I told my student advisor: ‘I want to make movies, but with visual effects and computer animation and interactive entertainment.’ He was like, ‘That doesn’t even sound like a career, son.'”

Wilson got his first job in animation following an introduction to Sharlto Copley when he was about 19. “He and Neill Blomkamp were good friends,” Wilson says of the actor and the director, both fellow South Africans who would go on to make District 9 together. “Neill had left behind a treasure trove of fully animated, robot rebellion shorts he had done, and I thought, ‘I can do this.’ And I went down this animation rabbit hole for 20 years, only to have emerged to make Bloodshot. For me, it was never about animation, it was about finding the medium to fit the story.” 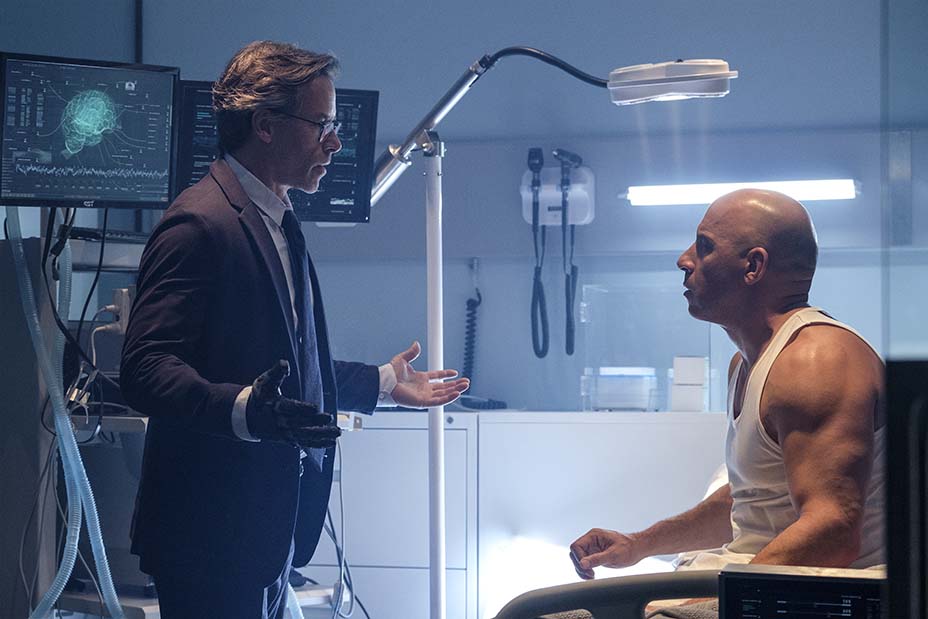 Of his first love, science fiction, Wilson references authors Michael Crichton and Daniel Suarez, noting that they have a “wonderful way of presenting the plausible what-if scenarios to our reality. Both have this incredible ability to wrap thought-provoking subjects into a cinematic, entertaining adventure.” Considering the adaptation of such robust material, he says, “One should be so lucky.”