Captain Marvel won big over the weekend with $455 million globally, the biggest launch for a female-fronted movie of all time, and perhaps one that was aided by one key innovation: how it treats its lead character.

When it comes to presenting underrepresented demographics in a major mainstream release (i.e., a blockbuster around not-a-white-guy), there are two fundamental approaches: emphasizing similarity and emphasizing difference. Basically, do you just treat the protagonist like you would a white male hero but cast an actor who ticks different demographic boxes, or do you choose to deem differences from the Hollywood default as significant?

So, for a female superhero, is she “one of the guys,” or do you make the fact she’s a woman a really big deal? When it comes to women kicking ass and taking names, mainstream media has consistently leaned heavily toward the latter approach.

Natasha Romanoff/Black Widow (Scarlett Johansson) was the MCU’s first female Avenger. Even the name Black Widow indicates a uniquely feminine sort of danger. In The Avengers (2012), she gets the call that it’s time to assemble the not-quite-yet team while prying military secrets from nondescript shady types in a slinky black cocktail dress. She lets them capture her to loosen their tongues by lulling them into a false sense of security, but after hearing from SHIELD Agent Phil Coulson (Clark Gregg), she quickly turns the tables on her captors, disposing of them with ease — and stopping to grab her stilettos on the way out. Her strengths are depicted with a uniquely feminine edge, and her insecurities are too. In attempting to build on her character in Avengers: Age of Ultron (2015), she is given a will-they-won’t-they romantic subplot with Bruce Banner (Mark Ruffalo) and a backstory that reveals a key element of her hesitancy to pursue her feelings: she was sterilized as the part of the abusive spy training she underwent as an adolescent. The film implies that she feels unworthy of a fulfilling romantic relationship because she is incapable of having the children that would traditionally be the endgame.

Elsewhere, Warner Bros. and DC’s Wonder Woman tells the story of how an Amazon from an all-female society takes on a war being fought almost exclusively by human males, one of her defining characteristics being her deeply caring, nurturing nature. On HBO’s Game of Thrones, Daenerys Targaryen (Emilia Clarke) is the mother of dragons. Looking to Disney’s Mulan or Eowyn’s Lord of the Rings “I am no man” subplot reveals similar patterns.

Captain Marvel’s greatest innovation is that, in this regard, it takes the road less traveled. Carol Danvers (Brie Larson) does not save the day because she is a woman; she saves the day and happens to be a woman. While Captain Marvel makes a point of depicting various cultural touchstones of everyday sexism — being told to smile more, recurring (and consistently baseless) accusations of being over-emotional — nothing about Danvers is pitched as uniquely “feminine,” and that’s kind of the point. 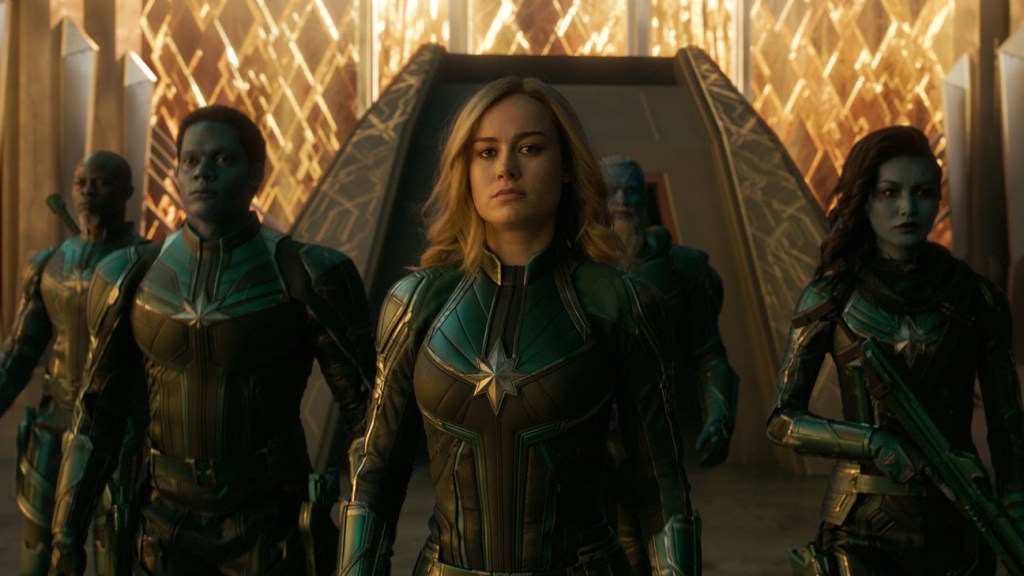 As a member of the Kree military Starforce team, Danvers wears practically the exact same uniform as commander Yon-Rogg (Jude Law) and all the other team members, regardless of gender — no special cleavage-revealing neckline modification, and for once, no high-heeled boots. There is nothing uniquely feminine about her fighting: no seduction, no contortionist acrobatics, no snapping men’s necks between her thighs. Her ability to listen to Skrull leader Talos’ (Ben Mendelsohn) side of the story and have a change of heart about her former enemies is not credited to a particular feminine capacity for empathy — if anything, it plays out like Tony Stark’s change of heart regarding weapons manufacture after finding himself at the wrong end of a Stark Industries missile in Iron Man.

In the final showdown with her former Starforce colleagues, Danvers comes into her full powers after destroying the Kree implant on her neck, realizing that what she had been told was for her benefit was actually designed to hold her back. Her full capabilities unleashed, she quickly overpowers her former colleagues to the tune of No Doubt’s “Just a Girl.” Much like “Just a Girl,” the message of the scene is not about women being powerful in some kind of uniquely feminine way, but about breaking free of societal restrictions that specifically hold women back.

Captain Marvel is a superhero origin story, the most popular subcategory within one of cinema’s most popular genres. By fitting into a tried-and-true basic formula and refusing to turn its biggest deviation from the standard — having a female protagonist — into a plot device, the film is an inevitably familiar viewing experience.

Watching Captain Marvel feels like seeing something you’ve seen before, and that’s exactly what makes it new and exciting.