In the fall of 2018, just two weeks before the start of production on Bombshell, Jay Roach was scouting a location at The Huntington Botanical Gardens in San Marino, California, with some 50 members of his crew and executives from Annapurna when his cellphone rang. “I get a call from my agent saying, ‘Don’t say anything because we don’t want everyone to panic, but your studio’s out,’ ” Roach says. “I looked around and realized that our executives on it didn’t even know.”

For the previous eight months, Roach and Bombshell‘s producer and star, Charlize Theron, had been in intensive preparations to shoot the timely movie about the women of Fox News who brought the sexual harassment case that toppled former CEO Roger Ailes. Now the project, with its star-studded cast of Theron as Megyn Kelly, Nicole Kidman as Gretchen Carlson, John Lithgow as Ailes and Margot Robbie as a fictional aspiring anchor at the network, seemed doomed. Megan Ellison’s Annapurna, which had backed Bombshell at $32 million, was in a cash crunch and was dropping it, creating a scenario where the tricky-to-schedule cast might be impossible to reassemble. “I panicked,” says Theron. “If we pushed just one week, the whole movie would have fallen apart.” 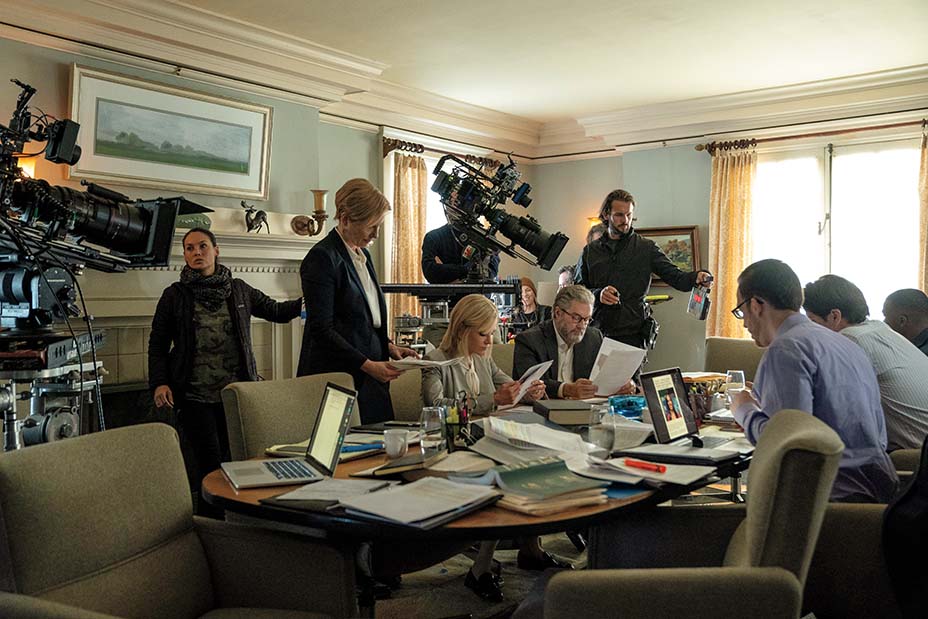 That panic passed quickly, however, and Theron hit the phones. Within six hours, she secured financing from her Tully backer, Bron Studios, which allowed Bombshell to stay on schedule, and within 10 days, the movie had a new studio, Lionsgate. Which is how Bombshell, arriving in theaters Dec. 13, became the first major Hollywood movie to emerge from the #MeToo movement.

Ironically, sexual harassment was a subject Theron had sworn off years ago, after making 2005’s North Country, a movie about female miners that barely caused a ripple at the box office ($25 million worldwide). “Nobody gave a shit,” Theron says. “And it kind of just made me go, ‘OK, I’m never making a movie like that again.’ ” But in the summer of 2017, two months before the Harvey Weinstein stories broke, Theron read Charles Randolph’s Bombshell script. “My walls were up, but it was so good, and so contemporary,” Theron says.

Randolph, who co-wrote 2015’s The Big Short, zeroed in on the idea of writing a script about Fox News after reading coverage of Ailes’ downfall in 2016. “I’m always looking for characters who have a strong and unusual internal conflict,” he says. “You have this entertaining arena and [the Fox News characters] are fun, engaging, contradictory, complex people who could take us on a journey in a way that we could start by laughing at them, a little bit. And then we start to laugh with them and then we start to really identify with them.”

When Theron read Randolph’s script, she asked Roach, with whom she had been working on an unproduced TV project, for his input. Roach, who had directed ripped-from-the-headlines HBO movies like Recount (2008) and Game Change (2012), responded with enthusiastic notes, including on how the film could be a warts-and-all portrayal of Kelly, unwittingly talking himself into a job. “It’s a tough decision to jump into a film about women’s empowerment, as a man,” Roach says. “I remember telling her that I wondered if a woman shouldn’t direct it, and she said, ‘Yeah, we thought about that, but there’s something about the way you’re talking about this that I feel like you have the right point of view.’ “ 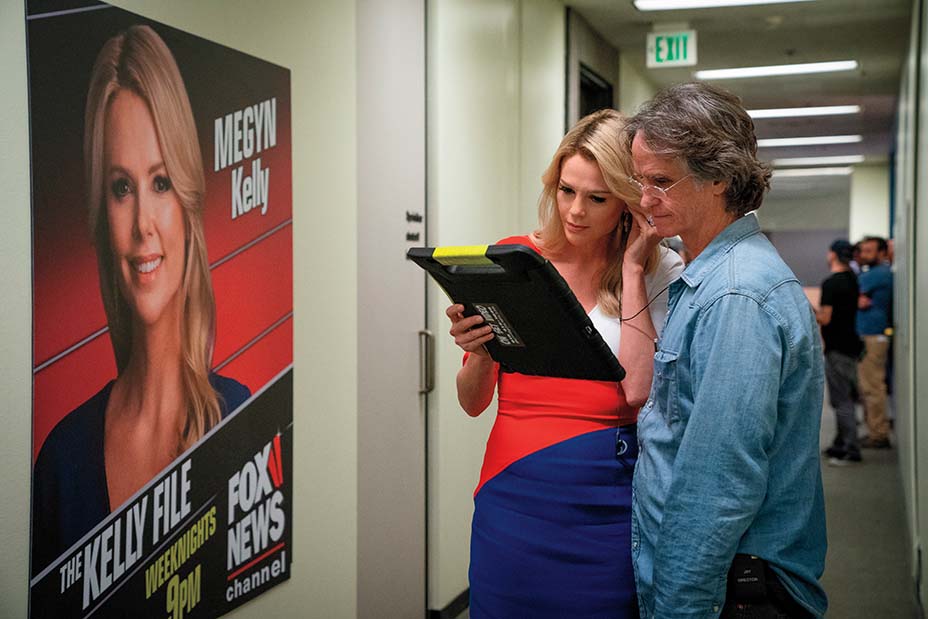 As preparation, the filmmakers read women’s affidavits about being subjected to sexual harassment at Fox, and spoke with former Fox News women, though neither Carlson nor Kelly participated in the film. Theron also worked with a dialect coach to master Kelly’s distinctive alto voice. “Roger pulled Megyn aside once — she talks about this in her book — and he said to her, ‘You need to slow down and enunciate,’ ” Theron says. “She really builds a lot of sounds around her words based on Roger’s advice. And the deeper voice is a show of strength. For her, it’s important to come across very strong.” At one point during preproduction, Theron so stressed her vocal chords while attempting to reproduce Kelly’s sound that she couldn’t speak for three weeks. 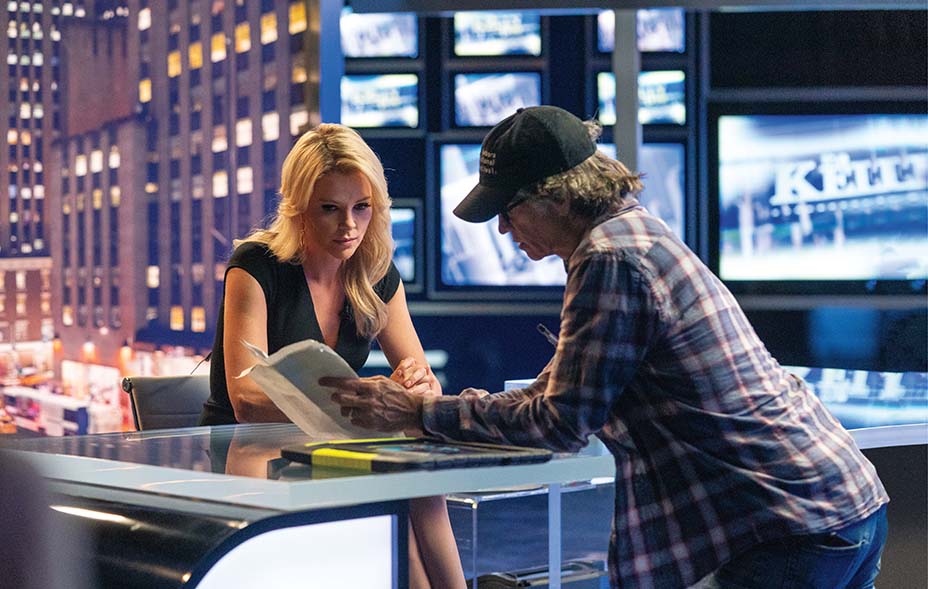 Theron’s striking physical metamorphosis — along with Kidman’s and Lithgow’s — came with the help of makeup artist Kazu Hiro, who won an Oscar for transforming Gary Oldman into Winston Churchill in 2017’s Darkest Hour. For Theron, Hiro sculpted several silicone pieces, including two to make the actress’ wide eyes appear more like Kelly’s heavy-lidded ones and one to give her more of Kelly’s angular jawline. “I tried to learn what makes Megyn Kelly look like Megyn Kelly, and to apply that characteristic of her face to Charlize’s face,” Hiro says.

Costume designer Colleen Atwood re-created what she calls Ailes’ “good girl but with a wink” aesthetic for on-air talent — body-hugging sheath dresses, jewel tones, towering stiletto heels. “[Ailes] had a clever kind of intuition about what people would notice — and especially, obviously, men,” Atwood says. “He branded that look in a way.” 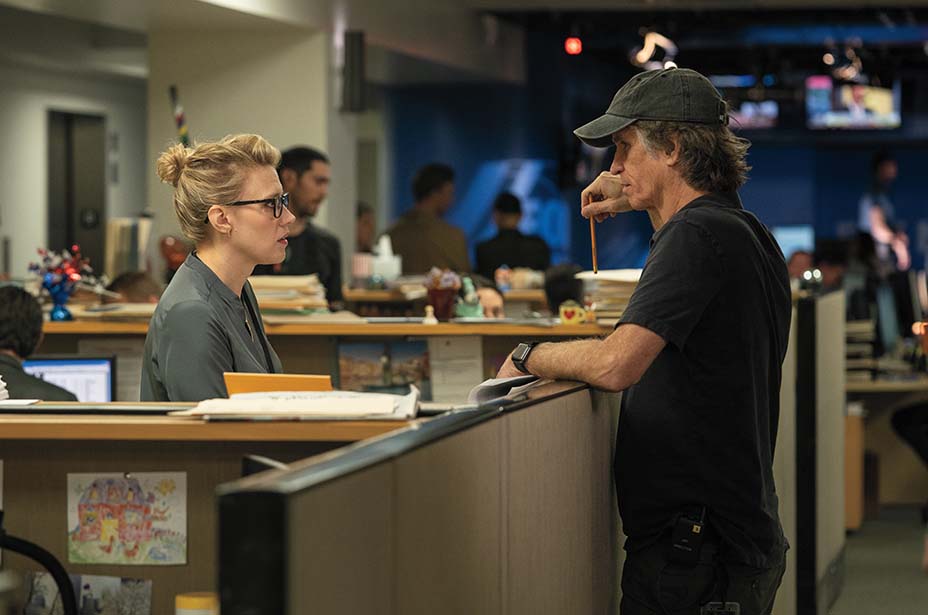 Production designer Mark Ricker built painstaking replicas of Fox News’ studios inside the former Los Angeles Times offices in downtown L.A. Because Fox didn’t participate, Ricker relied on what he calls his “moles” inside the company to help re-create the spaces, as well as photography he found online, including selfies Fox News hosts took in their offices and makeup chairs. One unlikely source of inspiration was foot-fetish sites, where fans had shared pictures of female Fox hosts in high heels that revealed details of their surroundings. “Ninety-eight percent of the people who see the movie aren’t going to know what the inner offices look like, but the other 2 percent of the audience will be the ones who worked there, and they will know,” Ricker says. “I just wanted them to think, ‘Oh my God, how’d they get it so right?’ ”

Throughout the film, Bombshell relies on news footage from Fox obtained via fair use. One detail crucial to Roach was that the dozens of monitors playing in the background showed news footage accurate to what would have taken place on the day the scene is set. Accomplishing that required the creation of an unwieldy planning document the filmmakers dubbed the “Meg.” “It was just such a megalodon of material, to be able to every day go, ‘What are on all these two dozen monitors, how much of that is archival footage, how much of this is stuff we’re generating from our actors?’ ” says Roach. 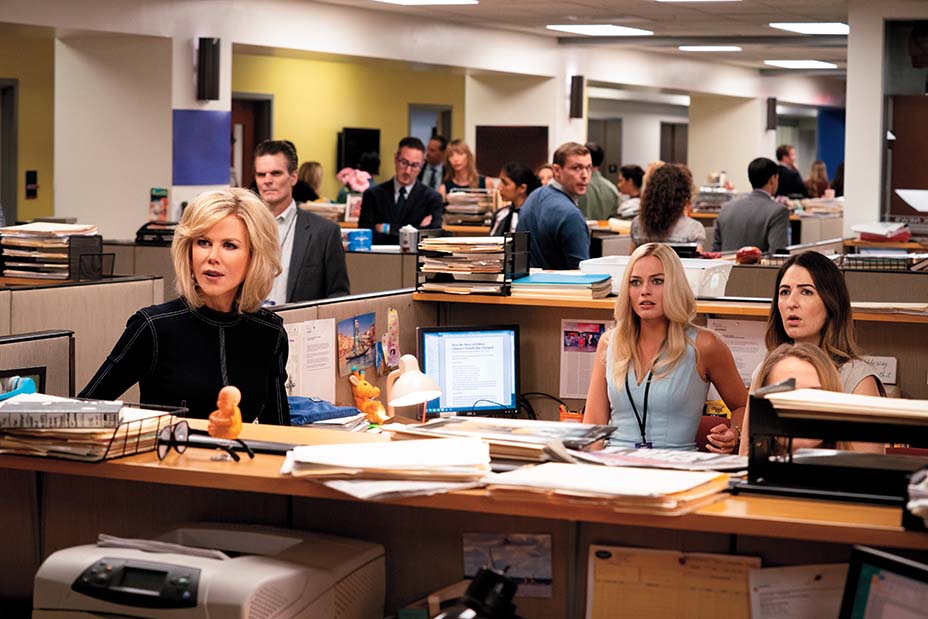 Two months into editing, Roach began screening early cuts for audiences. “The point was not to have the audience tell us how to cut, but to see what’s the right way to tell this story,” Roach says. One thing that was cut, though, were scenes that broke the fourth wall, a device Randolph had used to explain the mortgage crisis in The Big Short but which worked less well with the emotional material in Bombshell. “We started realizing that the issues didn’t want to be explained as much as they wanted to be experienced,” Roach says. “The note we were getting was, ‘Show us what it means, show us how it feels.’ “

Early reactions from some who worked at Fox during the Ailes era have been a mix of awe and discomfort over the film’s uncanny re-creations. “They captured the buzzy pace of that newsroom as well as the pervasive paranoia that existed under Roger’s watch,” says Alisyn Camerota, who now works at CNN and is played in the movie by Tricia Helfer. “There were times that I was transported back to my time there.”

The film’s ending, which contains a winking reference to Carlson’s NDA with Fox News, took on a relevance the filmmakers never anticipated in October, when the issue of the secrecy clauses returned to the news. Amid criticism of the network stemming from Ronan Farrow’s book Catch and Kill, NBCUniversal announced it would release employees from their confidentiality agreements. “We didn’t know Ronan Farrow’s book was going to come out and trigger all this stuff about NDAs,” Roach says. “We just felt that bringing the story back to Gretchen and all the risks she took was the right way to remind people what was at stake for her. A year before the Harvey news broke and the #MeToo movement really exploded, she was really jumping off on her own.”