Claire Foy is having a very good 2018. She’s been the lead or co-lead on three very different films, working with three very different directors, and has managed to craft singular, distinctive performances in each film. This past spring, she starred in the iPhone-filmed Steven Soderbergh thriller Unsane (a film that’s didn’t do well with critics, but not because of Foy’s performance); last month, she starred as the intelligent and feisty wife of astronaut Neil Armstrong in Damien Chazelle’s First Man. And now, Foy’s got herself a true starring role as the punk Swedish hacker Lisbeth Salander in Sony’s big-budget revival The Girl in the Spider’s Web. Foy again is able to create a distinct performance, even while taking over for another actress, even if the film itself fails the character.

Spider’s Web, despite not featuring any castmembers from David Fincher’s 2011 adaptation of The Girl With the Dragon Tattoo, is a follow-up to that story where Lisbeth Salander teamed up with journalist Mikael Blomkvist on a decades-old cold-case investigation. Years later, Lisbeth is still hacking into and destroying the lives of powerful men who do wrong by the women in their lives; in her introductory scene, Lisbeth strings up a smug Swedish CEO and transfers most of his millions to his battered wife. However, she’s moved on from Mikael (Sverrir Gudnason) — still jealous of the fact that the journalist would rather have a dalliance with his magazine editor Erika (played now by Vicky Krieps of Phantom Thread) — until she’s forced to ask for his help when she gets in too deep while trying to steal missile-guidance software from the American National Security Agency.

As depicted both in Fincher’s film and in the original books written by Stieg Larsson, Lisbeth Salander is a fascinating, multidimensional character. She has a secret well of tenderness masked by her outward and fierce appearance, and she’s also able to attract men who either see themselves as potential saviors or potential aggressors. As depicted in Spider’s Web, though, most of Lisbeth’s complexity is sanded down, turning her into a proto-superhero more than a real person. Her introduction is a perfect example of this shift: through director Fede Alvarez’s stylish cinematography, we first meet the Swedish CEO as it’s carefully revealed that he’s just beaten up his wife, and is trying to wave it off as a bout of insecurity. The CEO is then drawn out of his kitchen to a cavernous living room when the power in his house goes out. When he turns the lights back on, we see that Lisbeth is waiting for him. Specifically, she’s waiting for him to step in the right place, so she can set off a trap akin to an animal being caught in a rope trap in the woods. It’s meant to be viscerally triumphant when Lisbeth transfers his money to the wife, but it’s awfully hard to imagine how much planning had to go into getting this trap ready.

Another truly ridiculous example comes later in the film. By this point, Lisbeth is on the run and has enlisted the aid of an America NSA agent, Needham (Lakeith Stanfield, the best part of this movie). But first, she has to help him break out of Swedish police custody at the Stockholm airport. She hacks into the system, traps a cop in another jail cell, then opens Needham’s cell to let him escape. Once he’s walking through the terminal, Lisbeth hacks into the airport PA to have him walk to a specific gate, where she’s left him a burner cell phone and a blackjack. She calls Needham on the phone and guides him through a few hallways and secret doors; eventually, she leads him directly to her, at the same moment that another cop has her at gunpoint. Cue Needham taking the blackjack and knocking the cop out. The amount of planning that would have to go into this kind of escape is, frankly, utter nonsense. (She’d have to have known the cop would not only hold her at gunpoint, but do so right where and when Needham would arrive, which is…an almost omniscient amount of forethought.) 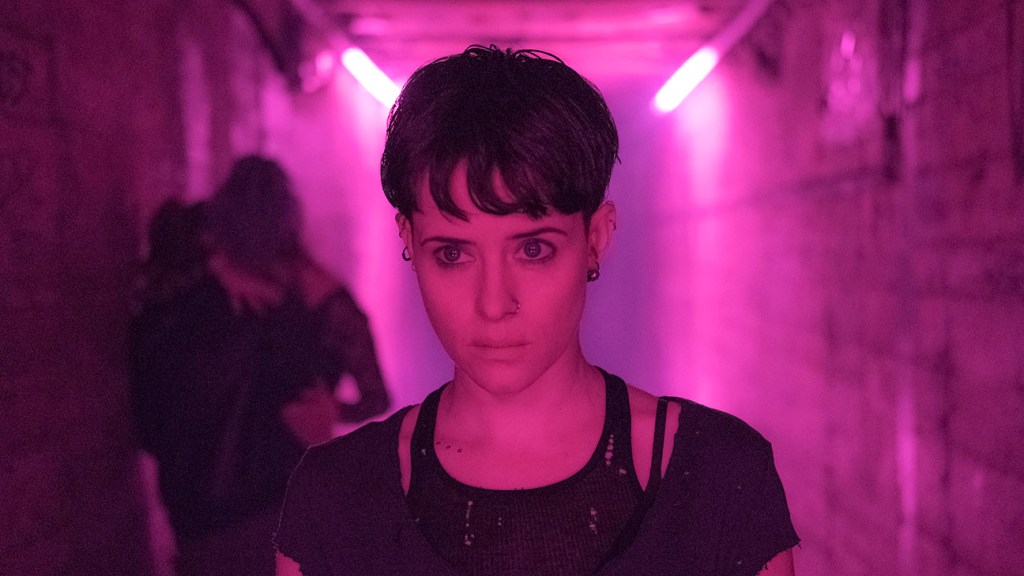 To be clear, none of this is a criticism against Foy herself, who does as well as she can with a nonsensical script. She’s almost able to sell the emotional side of Salander as well; as is foreshadowed in the pre-credits scene with a young Lisbeth, most of the criminal activity in the film is being guided by her long-lost sister Camilla (Sylvia Hoeks). Since it’s been decades, Lisbeth has suppressed her emotions about her sister, except when she sees random parents comforting their children and she looks very wrought with sadness. Foy does her best with this arguably silly emotional beat, even if the screenplay goes to that well a few times more than is necessary.

Foy’s displayed an almost chameleonic ability in her very different performances this year at the movies. Whatever else can be said of her work in Unsane, First Man and The Girl in the Spider’s Web, Foy’s not doing the same thing over and over. That she’s as believable as a Swedish hacker as she is as Neil Armstrong’s wife is a testament to her talent. The shame about Spider’s Web isn’t that the entire cast has been replaced, but that actors like Foy are working with such weak material beneath their capabilities.

New 'Girl': Claire Foy Opens Up on Politics, Fears and Her Dark Journey From The Queen to Lisbeth Salander