Gary Oldman had been asked to play Winston Churchill before. There was the time in 2014, for instance, when his longtime manager and producing partner, Douglas Urbanski, pitched him his own homegrown idea for a movie about the portly, cigar-chomping U.K. prime minister. But Oldman said fat chance. “How the hell was I going to do that?” asks the slender 59-year-old actor of playing such a larger-than-life figure. “It was never going to happen.”

Until, that is, it did. Oldman, wearing what may be the most masterful fat suit and prosthetic chubby face ever created for the movies, plays Churchill in Darkest Hour, which opened in select theaters Nov. 22 from Focus Features, ahead of a Dec. 22 wide release. Of course, Churchill has been depicted on film and TV before — most recently by John Lithgow in Netflix’s The Crown but also by Albert Finney, Brendan Gleeson, Bob Hoskins, Rod Taylor and even Christian Slater (see 2004’s Churchill: The Hollywood Years). But never before has he been brought to the screen by such a pedigreed team of filmmakers, with virtually everyone involved in the project having at one point been nominated for an Oscar. Along with Oldman (a nominee for 2011’s Tinker Tailor Soldier Spy), there’s Working Title producer Eric Fellner (a five-time nominee whose first film, 1986’s Sid and Nancy, launched Oldman’s career), screenwriter Anthony McCarten (a nominee for 2015’s The Theory of Everything) and Joe Wright (who made 2007’s Atonement, which earned seven nominations although somehow missed getting one for best director). Never in the history of cinema have so many statues been almost awarded to so few.

Jada Pinkett Smith Hopes Will Smith, Chris Rock Have "Opportunity to Heal" and "Reconcile" After Oscars

Darkest Hour is actually the culmination of two Churchill biopics that were percolating in England in 2014. While Urbanski was trying to coax Oldman into his project, McCarten had been pitching Fellner a script that focused on the tense five weeks of 1940 leading up to Britain’s entrance into World War II. Fellner, it turned out, had long wanted to make a Churchill movie and bought McCarten’s draft. Then, in early 2015, he called Urbanski and suggested an alliance. “He said, ‘Let’s not compete,’ ” remembers Urbanski, who quickly agreed to the partnership. After all, if anybody could convince Oldman to play Churchill, it’d be the producer who once cast him as Sid Vicious. “He was like a dog with a bone,” says Oldman of Fellner’s constant nagging about the part. “He wouldn’t let it go.” 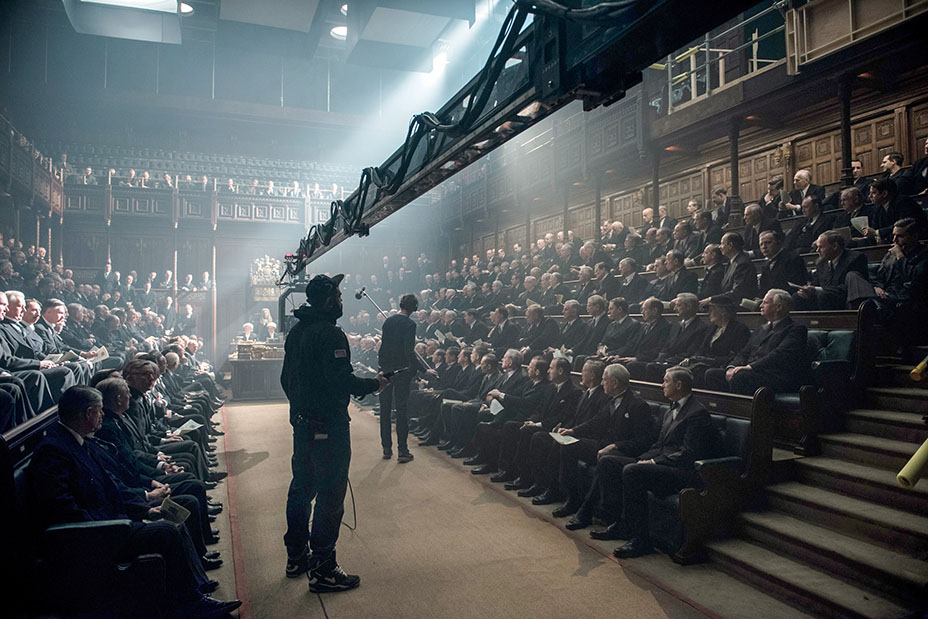 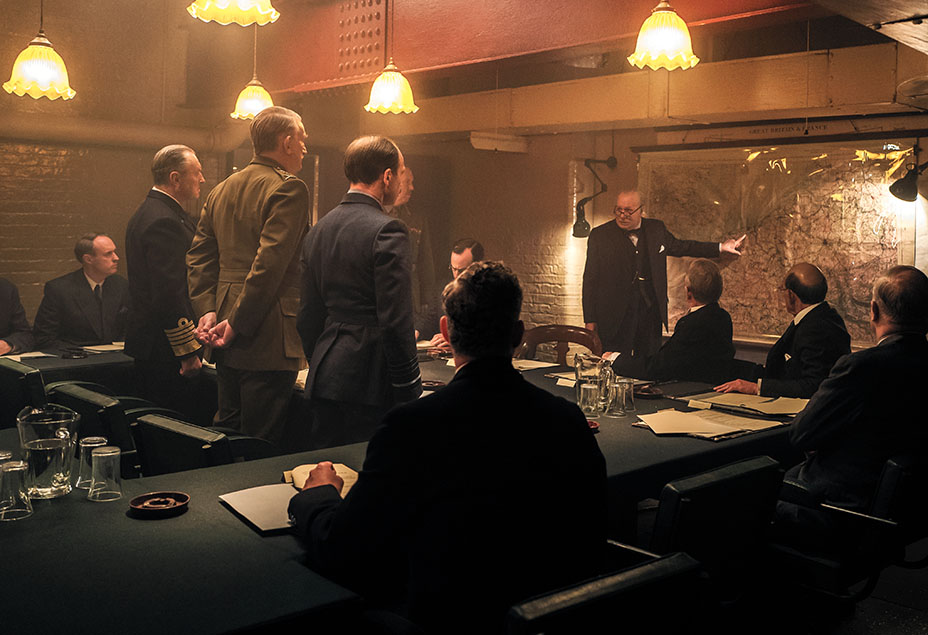 After filling out the rest of the cast — Kristin Scott Thomas as Churchill’s sharp-witted wife, Clementine; Lily James as his long-suffering secretary, Elizabeth Layton; Ben Mendelsohn as King George; and Ronald Pickup as Neville Chamberlain — Fellner and Urbanski brought on Wright, who had never directed Oldman but had met him in 1997, when Wright was an art student. Wright was somehow invited to a screening of Oldman’s first and only attempt at directing, Nil By Mouth, and briefly chatted with the actor afterward. “I shook Gary’s hand and was totally starstruck,” he says.

But there remained one giant problem: how to give Oldman Churchillian girth. Gaining that much weight for the role was out of the question; Oldman didn’t want to risk his health. Then the actor remembered having met famed prosthetics artist Kazuhiro Tsuji some 15 years earlier, when Oldman was briefly attached to Tim Burton’s Planet of the Apes remake. Just the man for the job, Oldman decided — except Tsuji had retired from film in 2012, at the ripe age of 43, four years after creating his masterpiece (reverse-aging Brad Pitt in The Curious Case of Benjamin Button), and had been devoting himself to sculpture. Oldman personally visited the artist’s studio in L.A. and pleaded with him to make a fat suit. “He said that if I didn’t, he wouldn’t play the part,” says Tsuji. 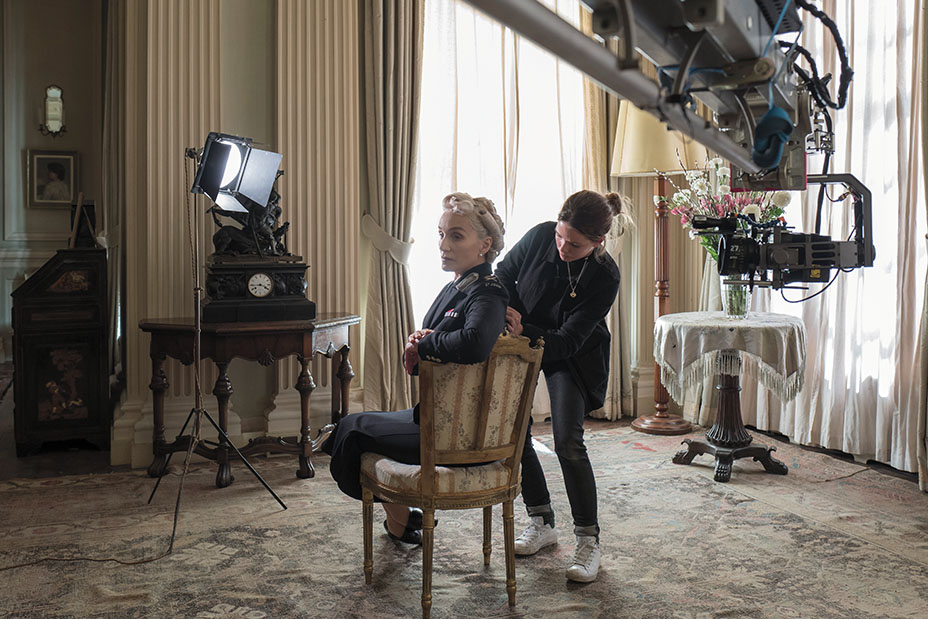 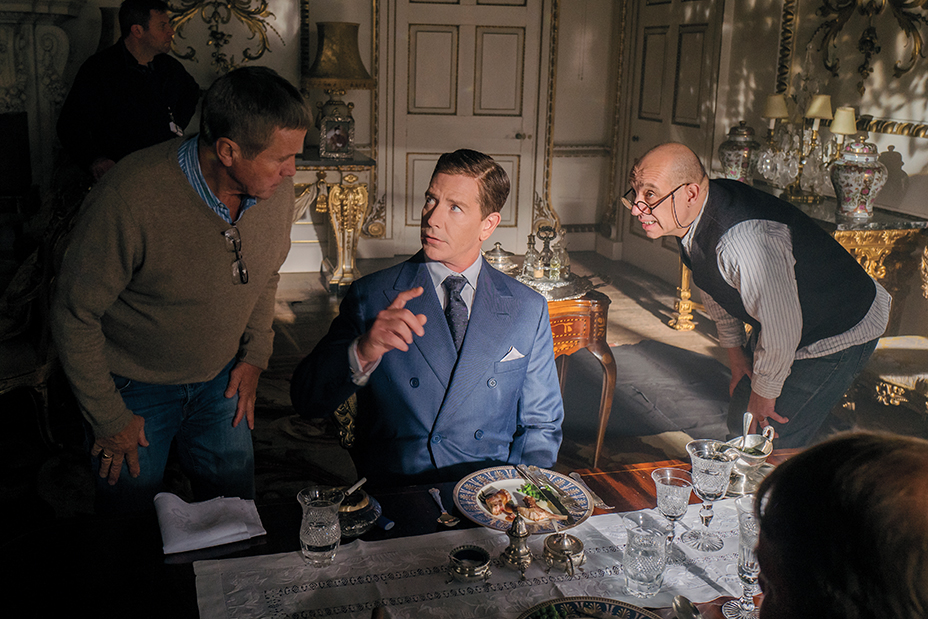 So, over the summer of 2016, Oldman and Tsuji labored to create Winston Churchill out of silicone, foam and spandex. Early versions were disastrous. “It was like Gary Oldman and Winston Churchill had a love child,” remembers Oldman. “And it wasn’t pretty.” But eventually Tsuji was able to fashion a mattress-padding suit and silicone face mask. The whole outfit weighed only about 14 pounds, left the actor with enough agility to act out Churchill’s energetic gestures and was so eerily realistic that it could fool a World War II expert. When a historian came to the set to give a talk to the cast, he spotted photographs of Oldman as Churchill tacked to a wall and mistook him for the real thing. “He said, ‘These look very interesting. Where did you find them?'” recalls Scott Thomas. “We said, ‘It’s not Winston; it’s our Gary!'” Darkest Hour‘s four-time Oscar-nominated cinematographer, Bruno Delbonnel, couldn’t believe his eyes, either. “I was searching for Gary Oldman, but the only place I could see him was in the eyes,” he says. “It was like seeing Churchill with the eyes of Oldman.”

By the time production kicked off in the fall of 2016, getting Oldman in and out of his body suit and face mask – with the help of makeup specialists Lucy Sibbick and David Malinowski – had become a well-rehearsed art form. But it was still one that required roughly three hours, 45 minutes before a shoot and 45 minutes after, giving the actor a gruelling 17-hour average day over his 48-day schedule.

Shooting took place on location in London outside the actual prime minister’s residence on Downing Street. “We had our Winston going into the very door that the real Winston Churchill would walk in and out of,” says Fellner. The subterranean war rooms under the Treasury building, where much of the interior action takes place, were re-created on a soundstage at Ealing Studios. “[It’s] a maze-like environment where you never quite know where you are,” says production designer Sarah Greenwood (four Oscar nominations, including 2009’s Sherlock Holmes) of the set. She says she used Hitler’s bunkers in 2004’s Downfall as a counterpoint, but while the Fuhrer’s underground lair was depicted as stark and authoritarian, Greenwood made Churchill’s shambolic and grimy. “The classic British way of doing something,” she notes.

Oldman spent hours listening to Churchill recordings to nail his cadence and watched old newsreel footage to master his bearing. He also studied a few of Churchill’s most famous oratories and then, for some of the film’s pivotal scenes, delivered them in front of 500 extras in the House of Parliament set at Ealing. “It was electric,” Fellner gushes of Oldman’s version of Churchill’s “blood, sweat and tears” speech, recalling how the extras gave Oldman a standing ovation after the first take. Oldman himself describes the moment as “a benchmark in my own career.” 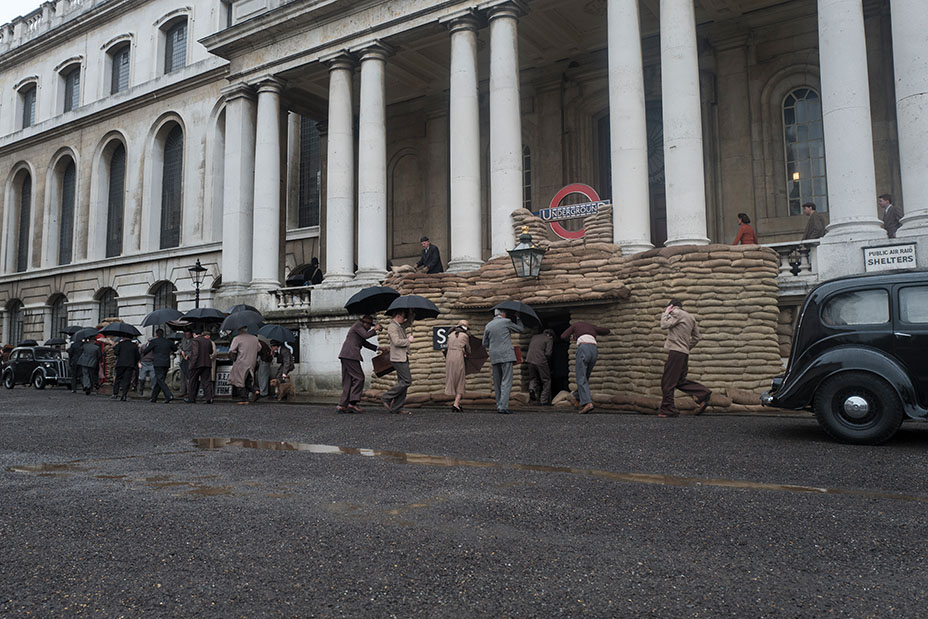 Still, there was one aspect of playing Churchill that made Oldman sick to his stomach: the cigars. During the production, he puffed so many of Churchill’s beloved Romeo y Julieta Cubans (at least 400 of them, at $50 a pop, with $20,000 of the film’s $30 million budget literally going up in smoke) that he was all but turning green under the prosthetics. “I got serious nicotine poisoning,” says Oldman. “You’d have a cigar that was three-quarters smoked and you’d light it up, and then over the course of a couple of takes, it would go down, and then the prop man would replenish me with a new cigar — we were doing that for 10 or 12 takes a scene.”

As far as Wright’s concerned, though, the poisoning was a small sacrifice to make for the greater good. “It’s Winston Churchill,” he says. “You can’t have Winston Churchill without a cigar.” 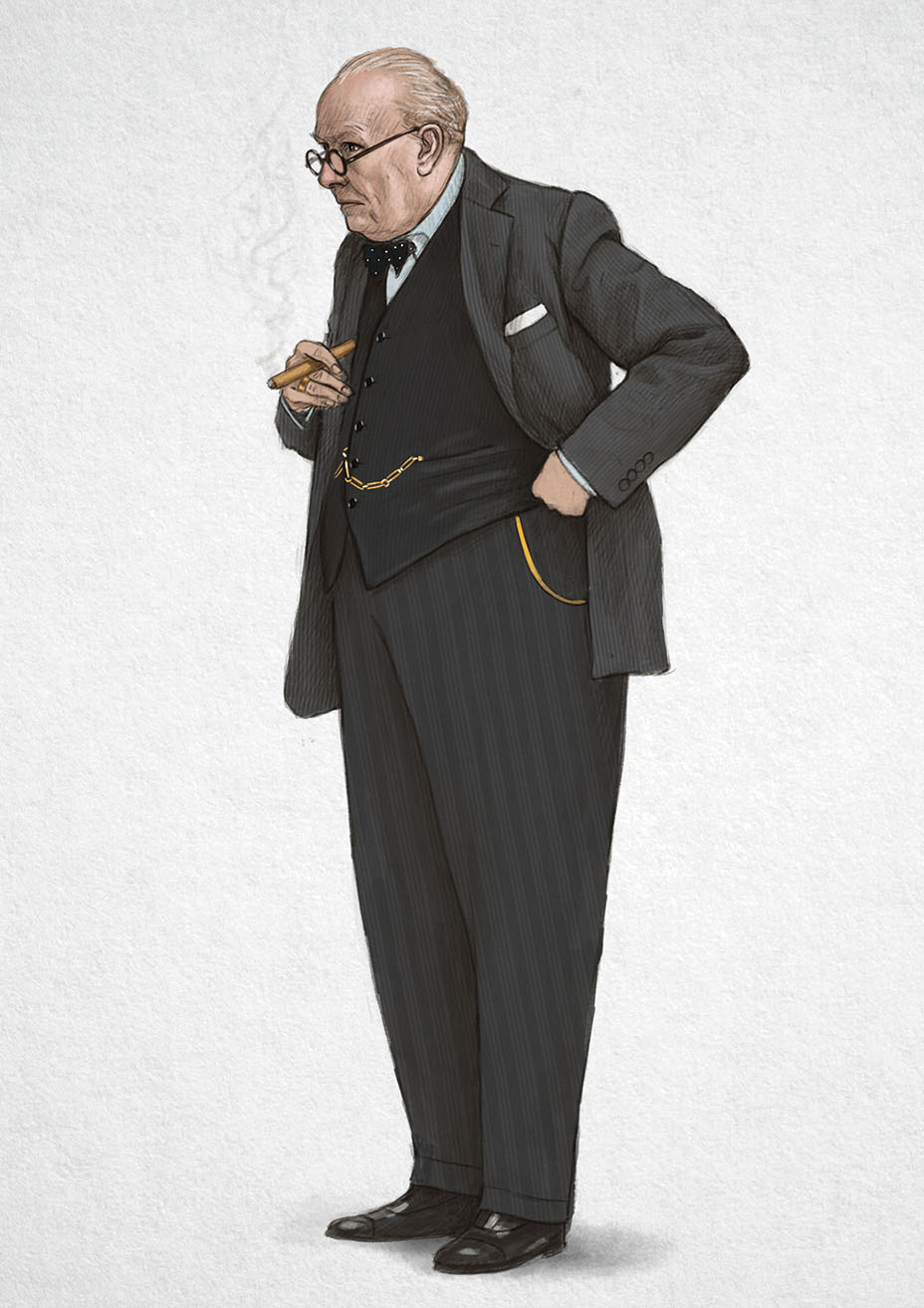 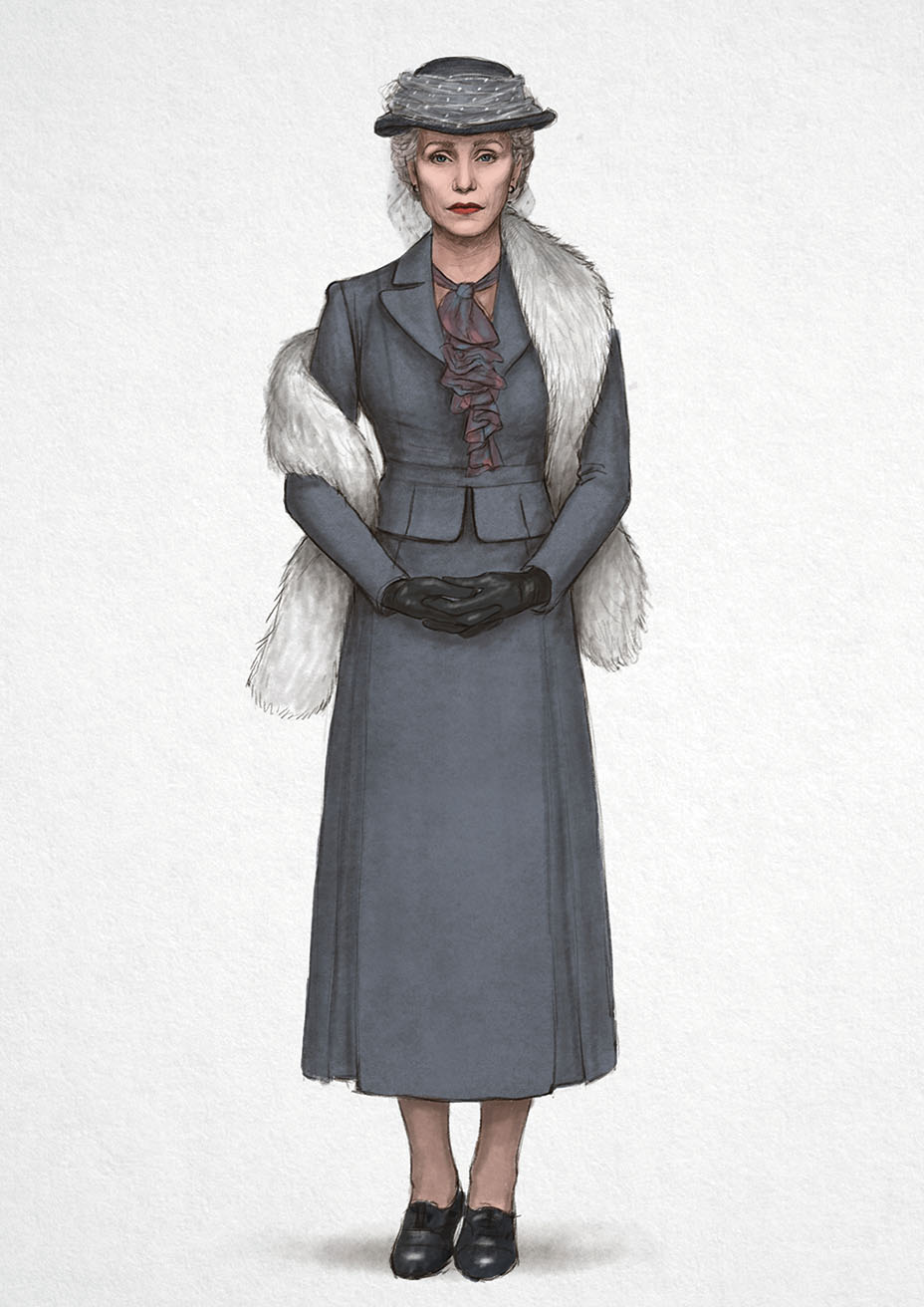 BRITS BOW TO HISTORY, BUT OSCAR MAY YAWN
Portraying an English king, queen or prime minister sometimes gets awarded stateside, but it’s a slam dunk at the BAFTAs back home in Britain

Gary Oldman can start passing out cigars — if recent British history is any guide, he’s a sure thing to win a BAFTA for his portrayal of Winston Churchill in Darkest Hour. An Academy Award, however, is still a question mark.

Not surprisingly, actors portraying historical British figures have a home field advantage when the highest film honors in England are given out every February at London’s Royal Opera House, even when Oscar hopes have fizzled on this side of the pond. Cate Blanchett won a BAFTA for 1998’s Elizabeth but got beat at the Oscars by Gwyneth Paltrow in Shakespeare in Love; Dame Judi Dench received a BAFTA for her Queen Victoria in 1997’s Mrs. Brown but lost the Oscar to Helen Hunt in As Good As It Gets; and Nigel Hawthorne won one in 1994 for King George II in The Madness of King George but lost the Oscar to Tom Hanks in Forrest Gump.

Of course, it’s possible Oldman’s performance is that rarest of transatlantic turns and wins both. The last time that happened, Meryl Streep starred in 2011’s Iron Lady, playing the second most famous PM in British history (after the one Oldman’s playing).