Universal Pictures unveiled the first major trailer of this year’s San Diego Comic-Con on Friday with a full look at M. Night Shyamalan’s highly anticipated Glass. Shyamalan, a filmmaker known for his clever twists, delivered his greatest one yet at the end of 2016’s Split. The James McAvoy starrer was revealed to be a follow-up to Shyamalan’s Unbreakable (2000) and went on to gross $278.5 million worldwide on a $9 million budget.

Shyamalan’s plans for a concluding chapter became clear after Split’s success, and moviegoers were rewarded with the knowledge that a trilogy many once believed would never come to fruition would finally be complete. While Unbreakable wasn’t met with the instant success of his previous film, The Sixth Sense (1999), Shyamalan’s deconstruction of the American superhero/villain complex by way of an intricate and restrained thriller has become a cult classic over the years. In the midst of the current explosion of superhero movies, Shyamalan’s films are more prescient than ever. Uniting the casts of Unbreakable and Split, Glass sees Bruce Willis, Samuel L. Jackson, James McAvoy and Anya Taylor-Joy team up for what may be Shyamalan’s most complex film yet. 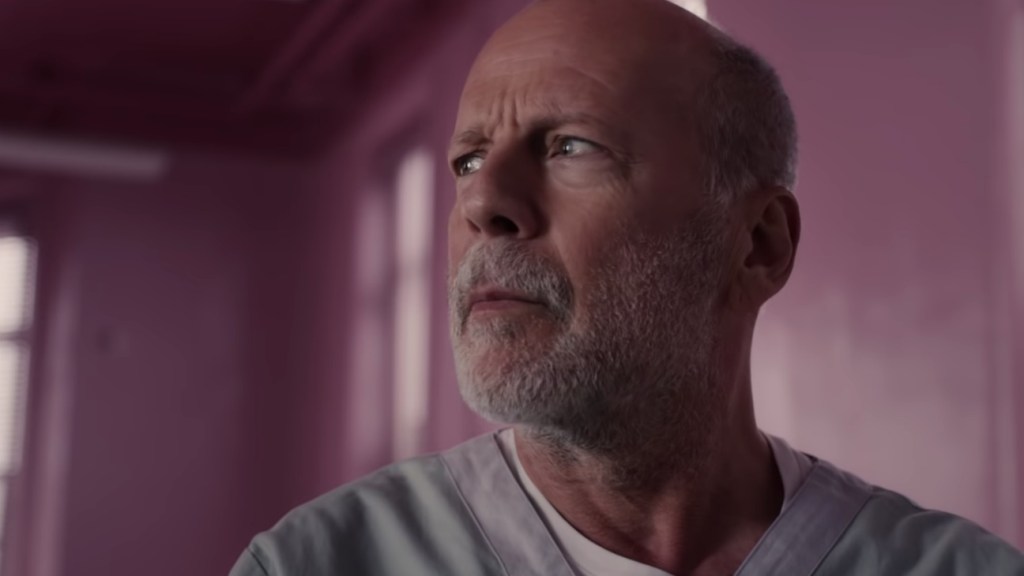 True to form, Shyamalan’s trailer opens by grounding us in the real world. The film’s stakes are introduced by a character new to Shyamalan’s world, Dr. Ellie Staple (Sarah Paulson), a psychologist who specializes in treating patients with delusions of being superheroes and villains. She says that it’s a growing field, and we learn that her patients are none other than Elijah Price (Samuel L. Jackson), Kevin Wendell Crumb (James McAvoy) and David Dunn (Bruce Willis). When we last saw Crumb and Dunn, both men were free, seemingly headed toward an inevitable conflict with each other. How they end up in the care of Dr. Staple remains to be seen. Given that Shyamalan is known for his aesthetics and telegraphing his themes through visuals, it’s worth noting that Crumb is placed between Price and Dunn, not only highlighting Split’s placement within the trilogy, but also Crumb’s psychological predicament of being caught between heroism and villainy as a result of his multiple personalities. 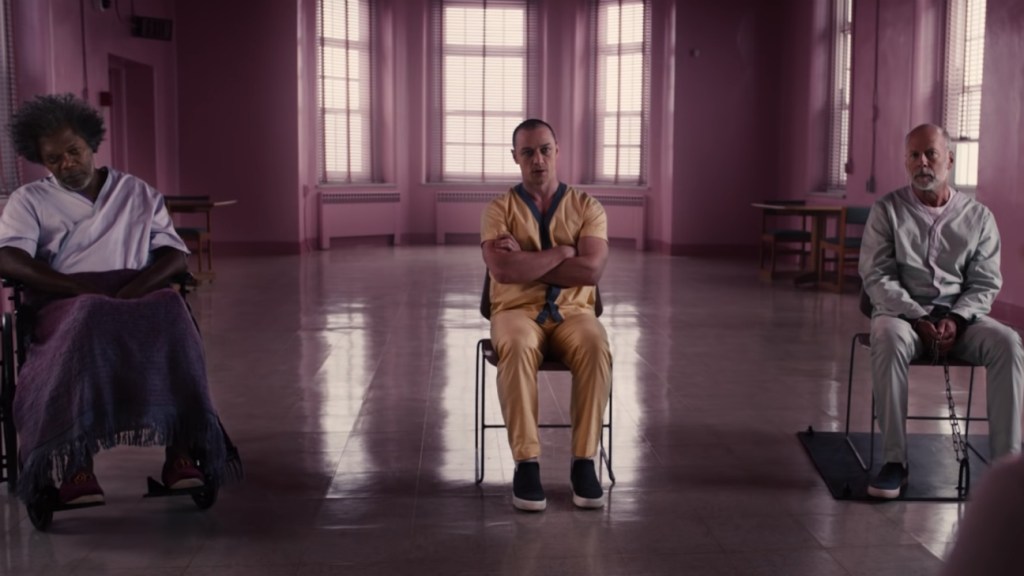 In the years since the events of Unbreakable, David Dunn has furthered embraced his role as a costumed hero, a job he describes as being “in security.” It will be interesting to see whether Dunn has only been going up against crooks, or if he’s encountered others with special abilities and an awareness of their roles within the dichotomy of comic book morals. Despite his belief in his abilities, which he refers to as feelings, Dunn has kept a low profile — his rain poncho giving him a spectral appearance that allows him to keep to the shadows, rather than exist in the same limelight as the comic book superheroes Price told him about. Still, given his role as “protector,” and the emergence of others with abilities, it will be fascinating to see how Dunn evolves over the course of the film and whether the world can embrace him out of the shadows, and provide him with a moniker that lives up to his heroic efforts.

Dunn’s nemesis, Elijah Price, aka Mr. Glass, reveals that he’s been waiting for the world to see that they exist. While the trailer doesn’t provide many hints into his master plan (and you know he has one), he does position his meeting with Crumb as the bad guys teaming up. If Unbreakable and Glass were two parallel superhero and supervillain origin stories, then Glass is the sequel in which the villain comes back more powerful and with a second villain in tow, and the hero is faced with losing everything. Shyamalan seems to not only be playing with comic book conventions, but sequel conventions as well. While comic books and superhero sequels usually have us expecting an outcome where the hero wins, the fact that this is titled Glass gives us reason to pause. If superheroes and villains existed in the real world, who would come out the victor?

Kevin Wendell Crumb, aka the Beast, appears to have continued his crimes of kidnapping young women, which presumably leads to his meeting of Price and Dunn. Several new personalities are also revealed in the trailer, which will further create the sense of unpredictability that worked so well for Split. We get glimpses of several action sequences in which Crumb battles Dunn, but we also witness what may perhaps lead to a more interesting revelation as his former victim Casey Cooke meets with him, seemingly pleading with him. Perhaps, Casey, through her empathy instead of Dunn’s brawn, may be able to save Crumb, and offer a better outcome for where he’ll ultimately fall on the hero and villain spectrum. 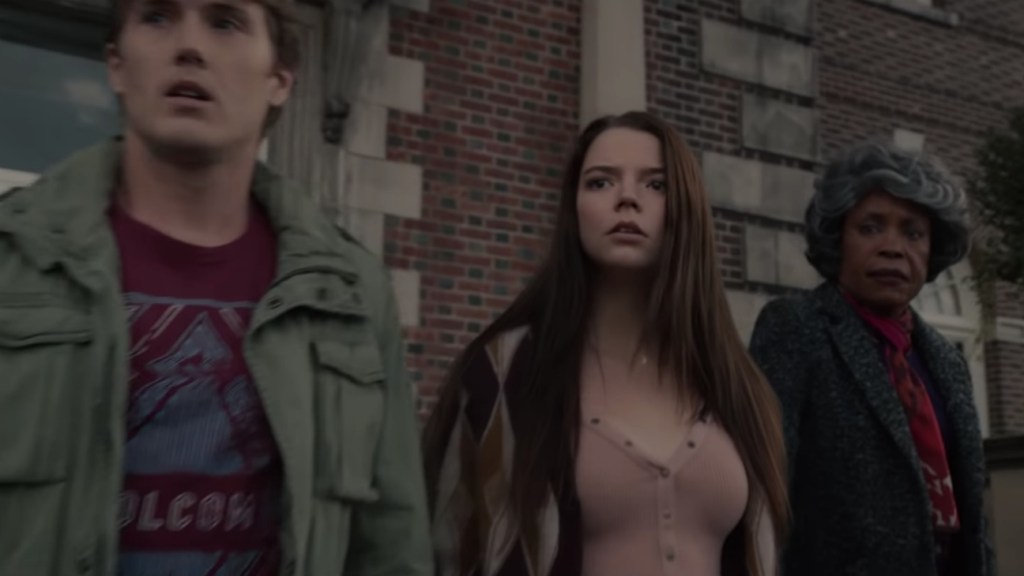 While the film’s marketing may naturally focus on Dunn, Price and Crumb, the film’s other trio — Casey Cooke, Dunn’s son Joseph (Spencer Treat Clark) and Price’s mother (Charlayne Woodard) — may ultimately play the most important role in establishing the future of this world. So much of comic book canon is focused on legacy, those who pick up the torch of hero and villain and continue the fight. Casey Cooke, whose name is alliterative like David Dunn, may be positioned as a sidekick and eventual superhero a la Robin. Joseph Dunn’s fate may not be as clear, as he is seen at a comic book shop, with neon signs reading “Heroes” and “Villains” shown above his head at different points, setting the character up for an inevitable decision. Price’s mother, who has remained nameless, is also in an interesting position in that many superpowers are inherited. Does Elijah’s mother perhaps have a similar genius-level intellect that could set her up as a Professor X-like mentor to Casey? Glass is said to be a conclusion, but going by Split’s box office, the eternal nature of comic books and the hints Shyamalan seems to be dropping, perhaps this film’s greatest twist will reveal that this is only the beginning.