There’s something monstrous in the heart of America — literally. In Grendel, Kentucky, an upcoming series from upstart publisher Artists, Writers & Artisans, the Beowulf story gets updated and transported to Kentucky in the 1970s, with the result being something quite unexpected, and more than a little unsettling.

Written by Jeff McComsey (American Terror, Flutter), with art by Tommy Lee Edwards (Mother Panic, Marvel 1985, Batman), Grendel, Kentucky is described by the publisher like this: “For two generations, the rural hill town of Grendel, Kentucky has honored its Faustian bargain with the monster living in its abandoned coal mine: a human sacrifice every season in return for agrarian prosperity the likes of which this rocky region had never before seen (including its greatest cash crop: the dankest weed in the land). When one town elder breaks this pact, Grendel’s only hope is that its prodigal daughter will return home to face down the creature of her nightmares-and bring her all-female biker gang with her.”

Grendel, Kentucky is the latest launch from AWA, the publisher founded by former Marvel executives Bill Jemas and Axel Alonso. The Hollywood Reporter spoke with Alonso, and series co-creator McComsey, about the new title.

I don’t want to start with the generic “where do you get your ideas from” question, but it’s not as if the mixture of contemporary rural America and a retelling of Beowulf, or at least a story that takes its inspiration from it, is the most immediate idea. How *did* this come together?

Jeff McComsey: I remember reading somewhere that when the monster Grendel first attacks King Hrothgar’s shield hall in Beowulf, it’s the prosperity of Hrothgar’s kingdom that provoked the monster. He was jealous that they had it so sweet, while he lived in a swamp. I think it was that that led me to this idea of a quiet little fiefdom in Kentucky where a town had found a way to stay out of the coal mines that consumed all their neighbors. The town of Grendel is a Marijuana farming community when our story begins. Although Grendel Kentucky is set in 1971, I like the notion of old economy vs. new economy already being alive and well. As coal jobs become fewer and fewer in 2020 while the untapped revenue of legal weed sits on the horizon, it’s very easy to imagine Kentucky towns making the same decision Grendel does today.

Axel Alonso: When Jeff pitched a reworking of Beowulf in the hills of Kentucky, he had my immediate attention. Beowulf happens to be one of my favorite stories, and I’m hard-pressed to think of a book that’s been more influential to my creative career than John Gardner’s Grendel, which retells that tale from the monster’s perspective.

In many ways, Grendel, Kentucky is a series that intentionally plays with expectations, especially when it comes to its main protagonist, Marnie, who feels wonderfully three-dimensional almost immediately, and entirely complex — leader of an all-female biker gang, simultaneously ready-to-fight and surprisingly tender, and arguably the key to the entire story. Notably, she’s a character at odds with the male-dominated world she exists in. Why Marnie, as opposed to a character readers might more traditionally expect to find in a story like this?

McComsey: Marnie’s addition to the story for me was the point where it became something more fun than just a Southern fried retelling of Beowulf. I loved the idea of this badass biker woman having to return home and face things she hasn’t confronted since she was a little girl. To put oneself in that position, that takes a different kind of grit than we see with your standard male protagonist. Marnie is a tough woman in a tough world, but as we find out she also happened to be raised by kind, decent dope farmers who didn’t make a fuss over her being a girl doing boy stuff.

Alonso: Exactly. Our Beowulf is an outlaw biker-chick and Grendel, Kentucky’s prodigal daughter. When her surrogate father is found ripped to shreds outside an abandoned mine, she is compelled to return home, where she must confront a monster from her past that still has a hold on her. This is her story.

McComsey: Also, she’s one of a few 6’3” blonde characters I’ve created on the off chance I ever bump into Gwendoline Christie in an airport.

Grendel, Kentucky, feels like a good example of what AWA’s Upshot imprint does as a whole: genre works that are mainstream in appeal, but at the same time aren’t the kinds of stories other publishers are necessarily doing a lot of (if at all). Axel, you mentioned being pitched the central idea — how fully formed was the series before AWA’s involvement?

McComsey: Somewhere around my studio is a post-it note that says “Kentucky Beowulf” on it. I was asked to pitch something for AWA and remember digging it out.

Alonso: At AWA, we want our stories to span — and blend — all genres. We want to deliver compelling hooks and accessible, entertaining stories that defy genre expectations.

McComsey: I would say what I brought to AWA was a seedling of an idea that with help from Axel and Mike Coast became a healthy sapling. From there, Tommy and John [Workman, letterer] came on board and turned it into a mighty oak, just to beat the tree metaphor to death.

You mentioned Tommy Lee Edwards, Jeff, and — the series is wonderfully atmospheric, with Tommy’s art, especially his colors, really doing a lot of heavy lifting at times. Despite this being “a monster story,” it’s something filled with an understated menace, at least in the first two issues. Are you setting us up for a particularly gory climax, or are you of the feeling that things are more scary and unsettling when they’re quiet and threatening?

Alonso: Once Tommy Lee got on board, there was a huge tonal shift. The story got covered in soot and soaked in Jack Daniels. And the monster got to be something really nasty.

McComsey: One of the words I think we threw around a lot when I was first outlining Grendel, Kentucky is “Grindhouse” and I think, in particular, the last two issues deliver on that. We are setting the stage for some gnarly fights. Tommy’s very good at drawing the mayhem and all beats in between.

Getting these Grendel pages from Tommy Lee Edwards and John Workman in my inbox is a rare treat I will sorely miss when this is all wrapped up.

Grendel, Kentucky launches digitally and in comic book stores Sept. 2. Below, Edwards’ cover and interior artwork from the issue. 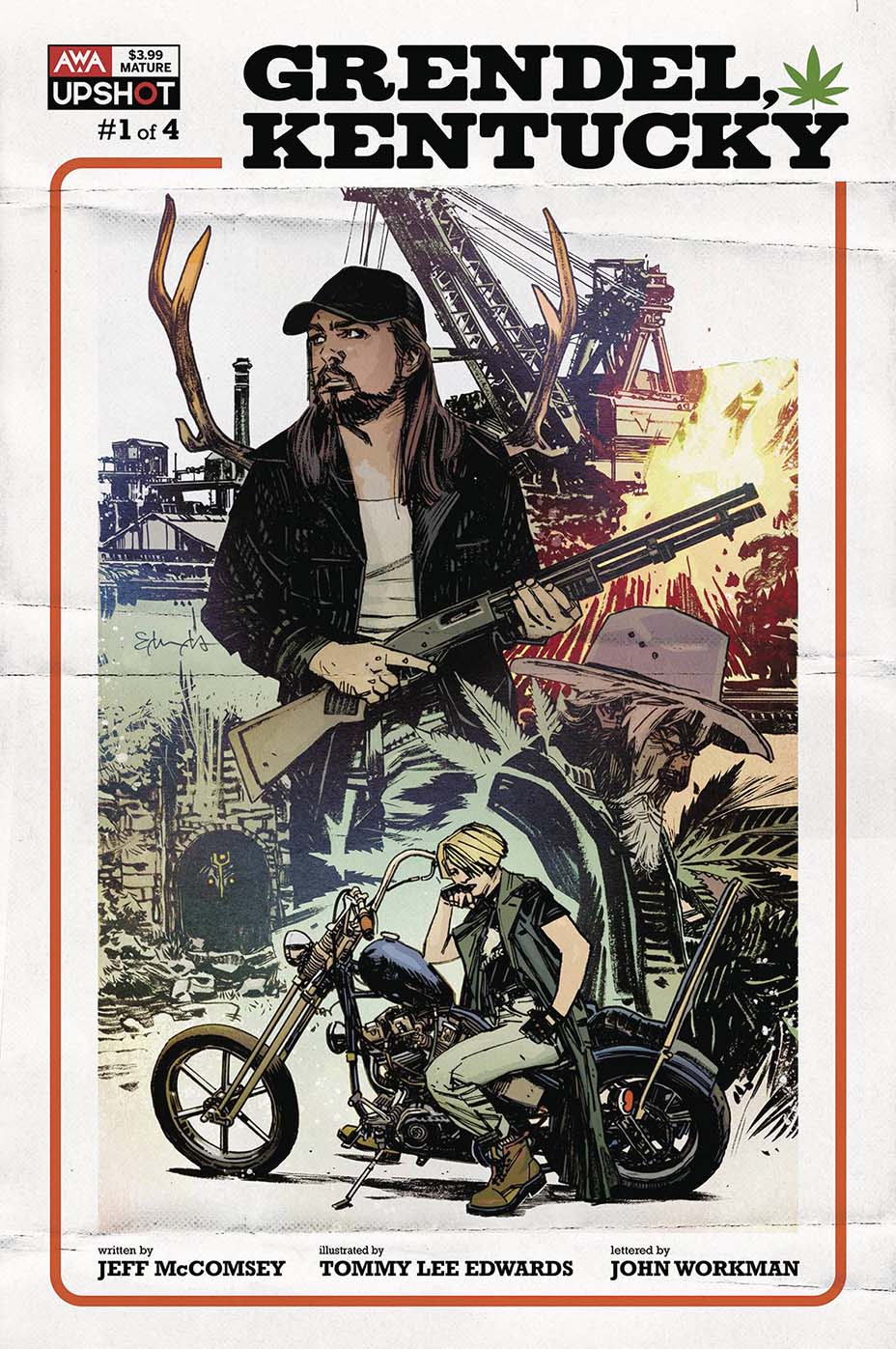 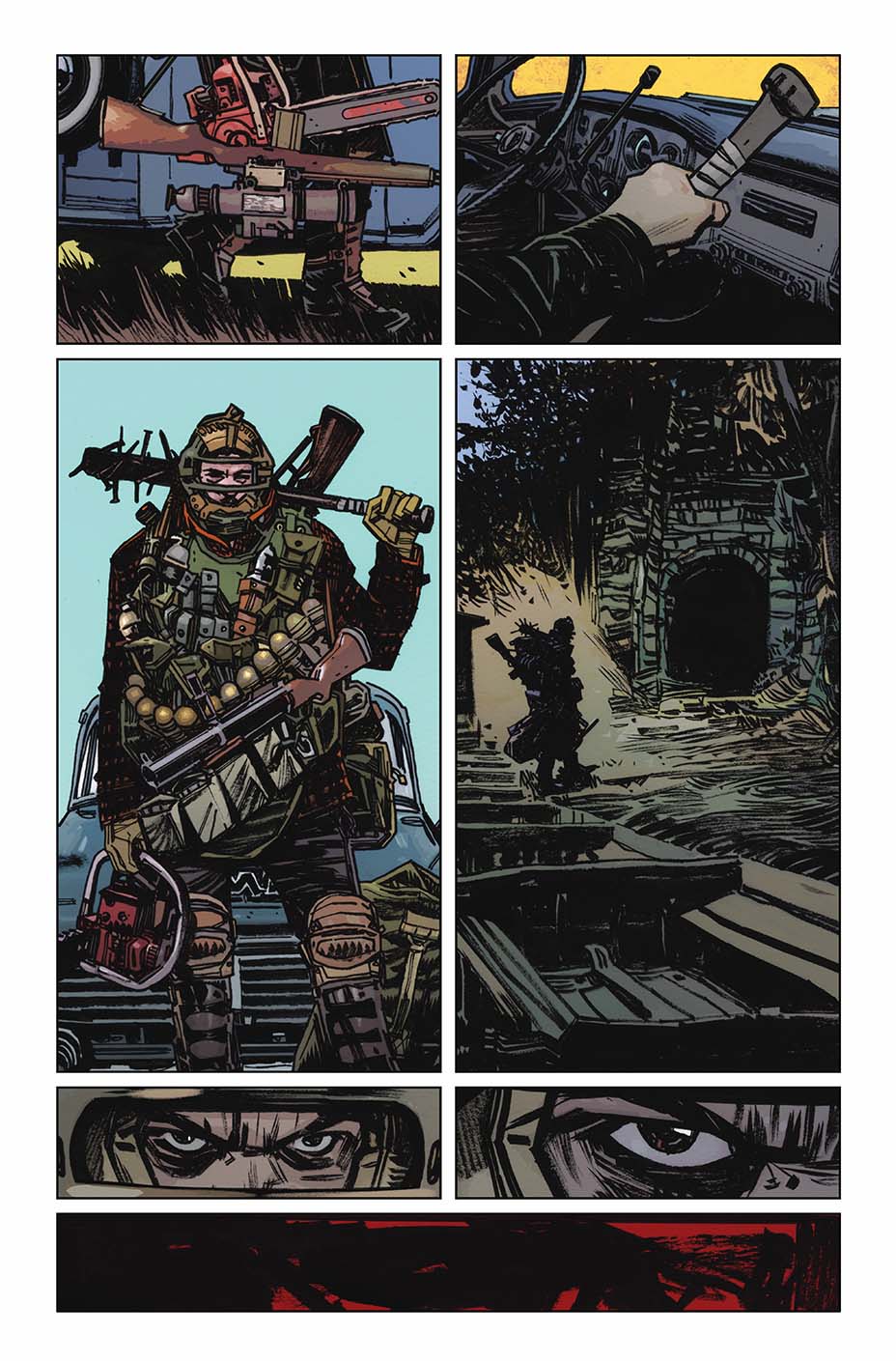 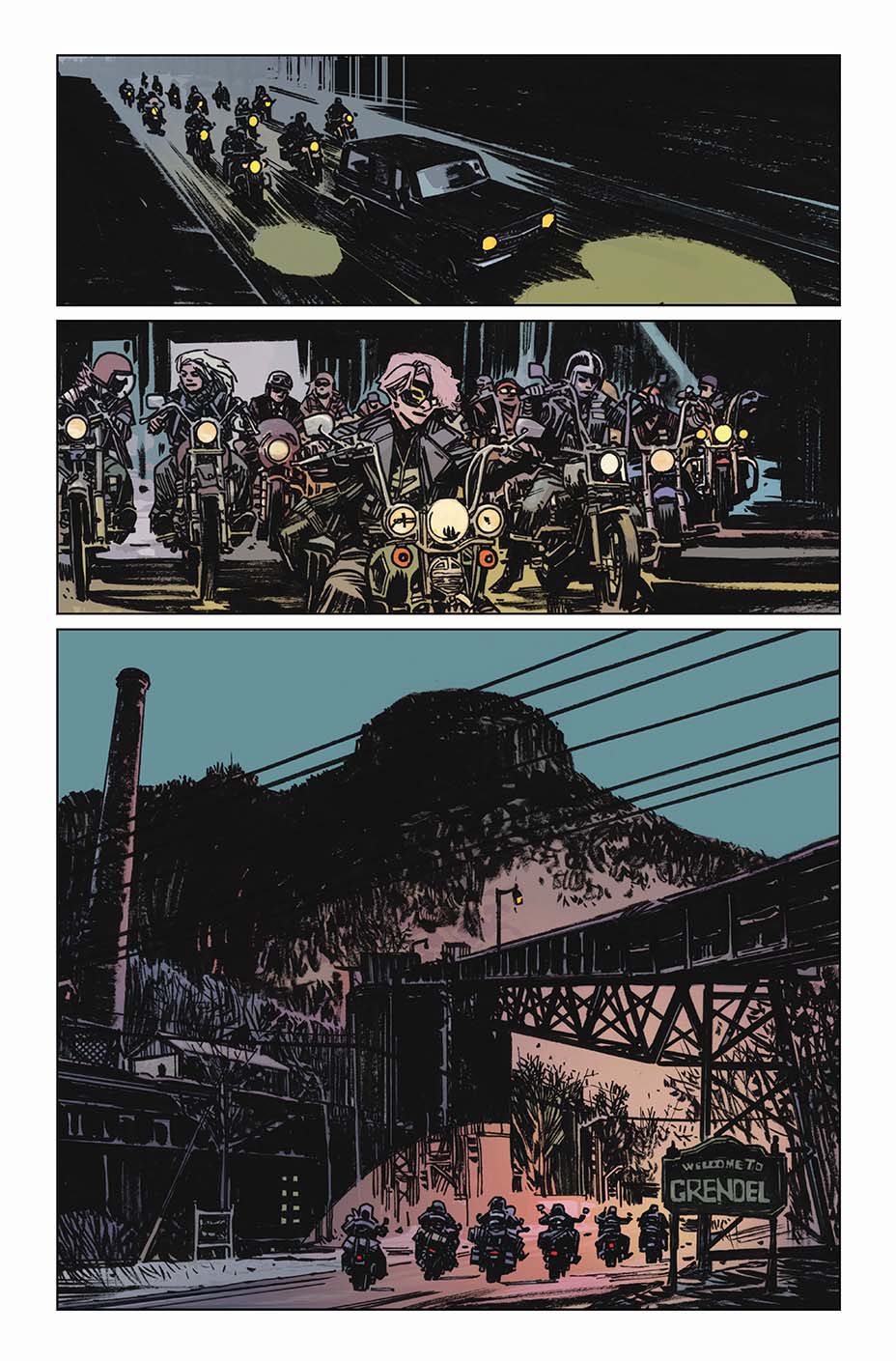 More information about Grendel, Kentucky can be found here.