The slasher makes his way up the drive-way. Mask hiding a history of missteps, he walks with purpose, an overwhelming desire to terrify. He makes his way to the front door, and hesitates before knocking. He moves around to the side of the house and peeks in. There are half a dozen supernatural presences, their frames intersecting with the promise of cinematic universes, there’s a social thriller showing off its Oscar, and a newcomer with a badge that says “not a horror movie” looking at the award enviously, and in the corner there’s a clown counting his stacks of money. The slasher returns to the door but doesn’t knock, not yet. He knows his time is coming, and that once he steps through that door into that house of horrors, he’ll have to have something new, something to turn heads back in his direction after so many years.

We’re in an interesting time in the history of horror movies, arguably the most interesting time. The genre has been embraced in a way that its position as the black sheep of cinema has softened and become gray. Horror fans know that their genre is too often an easy target for critics, so much so that even directors of horror films have distanced themselves from the genre, coming up with other labels for their films so as not to slum it with the horror crew. But we’re seeing a revived critical appreciation for horror films, particularly ones that don’t establish themselves as potential franchise starters from the onset. Films like The Babadook (2014), The Witch (2015), Get Out (2017), mother! (2017), A Quiet Place (2018) and Hereditary (2018), have served as reminders, not without controversy, for the general public that horror is and has always been a social barometer for our times. These recent films, which offer a kind of tasteful artfulness befitting their awards season appraisal, make it easy to love horror because they strike an emotional chord that’s so honest it hurts. They’re lofty, ambitious and made by filmmakers who take every opportunity to openly reveal their films’ thematic relevancy. These are films that have bucked the trend of horror appealing mostly to niche audiences and young adults. This is horror domesticated, house-trained and welcomed with open arms. But what happens with the horror just outside our door? Those terrors we’re no longer keeping a close eye on?

The slasher movie is almost as far away from domesticized horror as the genre can get, perhaps only beaten by cannibal films and torture-porn on the way to the outhouse of critical consideration. Slasher movies, and their reliance on formulas and teenage characters, are a far cry from the kind of originality and adult-minded horror we see in films like Hereditary. Despite our nostalgia for all things ’80s, outside of niche circles, slasher movies haven’t been able to make the transition to mainstream in quite some time. Despite responses that often label the ’80s as the best decade for horror movies, a time when a slasher movie came out on an almost weekly basis, the response to new slasher movies, even great ones that offered pointed closure on the cycle of ’80s slasher sequels, like Scream 4 (2011) and the recent The Strangers: Prey at Night (2018), have been tepid at best. As a sub-genre, slasher movies are often regarded as a step backwards in the evolution of horror, despite their ability to be fun. Whether it’s a result of audience burnout from the cycle of ’80s remakes that defined so much of early 2000s studio horror, or whether supernatural horror is more appealing because it highlights our inability to have control over the world, something that runs parallel to our political climate, slasher movies have been cast off to the fringe. But while it’s been residing there, it’s also been evolving, picking up our social changes, and becoming if not prestigious then at least something that could have real staying power in a few years’ time. The slasher movie is reviving right under our noses, but are audiences invested enough to show up for it? 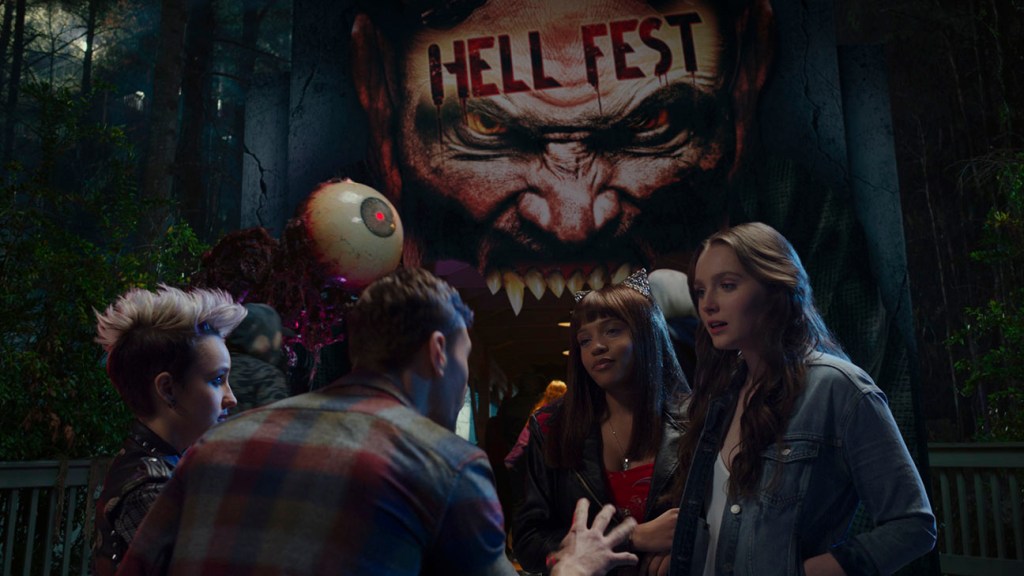 Last month saw the release of CBS films’ Hell Fest, which opened with a little over $5 million on its $5 million budget. Although a strong opening for a modestly budgeted film, the turnout was at the same time disappointing for those hoping for a revival of the slasher genre. It for all intents and purposes checked all the boxes that those requesting a return of slasher movies have been clamoring for — an R rating, clever kills, neat production design and a killer, “The Other” with the possibility to become a new icon. But it also had something else as well: a rejection of the formula that shames young adults for their decisions and morality. The list of rules in a slasher movie, highlighted by Wes Craven in Scream, demand a kind of puritanical behavior set in order to ensure survival. It’s these rules that allow the victims to merely become the deserving dead in a kill count and the killer to become a kind of hero, a parental boogeyman that scares kids straight.

But Gregory Plotkin’s Hell Fest takes an interesting approach in that the group of friends in the film are all likable. Sure, they drink, and are at times harmlessly belligerent, but there’s not an asshole among them. It’s the first slasher movie in a long time where every character in the group is not only likable, but they like each other. So when The Other begins his killing spree, the deaths have meaning beyond their shock value — they tap into our sense of empathy. This isn’t to say that the film doesn’t have its tropes or that it’s some lofty art house slasher film. It’s not. But it taps into something distinctly modern in its intentions to not only make these characters endearing but to also avoid placing any blame on them. Horror has always been a genre with feminist leanings, but so many of the ’80s slasher films and feminist readings that prop up the idea of the final girl are founded on the idea that one girl must be pure and the rest are covetous, cruel and cheaters. There’s an odd and often uncomfortable sense of slut-shaming in slasher movies from the ’80s to the 2000s that relies on pitting women against each other. Hell Fest, even when its opening suggests it may go that route, avoids that and instead puts women together and allows for their reliance on each other to give them an edge. 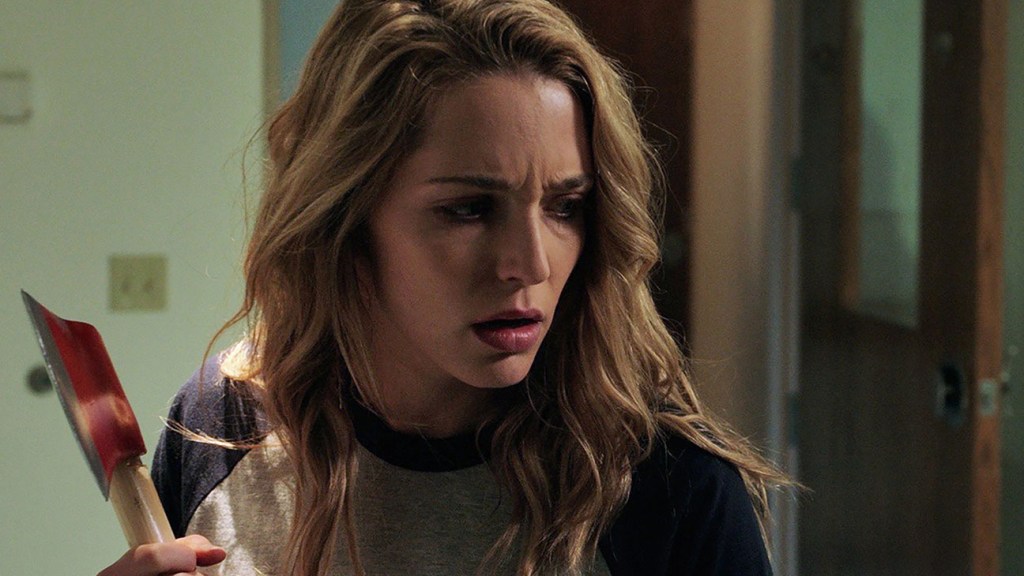 Last year’s Happy Death Day, managed to land a solid box office take, $122.6 million worldwide, and get a sequel greenlit on its PG-13 rating, also had an interesting approach to the slasher conventions. While its Groundhog Day-esque time travel element was its biggest selling point, Happy Death Day does create an interesting avenue for redemption for the lead character who in any other movie would be the girl viewers hoped would be killed first. Like Hell Fest, there’s a throughline in Happy Death Day that encourages empathy and asks viewers to side with the characters rather than the killer. It’s a slasher movie that presupposes individuals’ ability to change, and that the morals of young people are not the defining traits by which they’ll live the rest of their lives. Slasher movies, so many of which, are founded on grudges and revenge, are embracing themes of forgiveness, not through the killers themselves, but through the presentation of the characters’ arcs.

But even the lack of forgiveness is beginning to be presented in a new way. Panos Cosmatos’ Mandy can be looked at as a deconstruction of the slasher movie. The director revealed to RogerEbert.com that Nicolas Cage’s portrayal of woodsman Red Miller was partly inspired by Jason Voorhees, in Friday the 13th Part VII: The New Blood (1988) no less. “One of my favorite things in the film … I gave him Friday the 13th: Part VII to watch, in light of his character’s last third of his arc. I’m happy that there’s a very brief moment where he’s specifically homaging a thing that Jason does in the film,” Cosmatos said. The perspective is an interesting one to consider when looking at the movie because Red’s revenge story is very much a slasher movie from the perspective of the killer. The key beats of the slasher movie, particularly Friday the 13th are there: A mysterious man living in the woods, who loses the love of his life when a group of drug-using, sex-enthused “hippies” come crashing into his life. Red kills each interloper one by one, while surviving death-defying situations himself, resurrected each time with the same drive for vengeance. Mandy, at least in this interpretation, is the slasher movie unmasked, and yet another example of the subgenre’s evolving sense of empathy, this time for the killer. 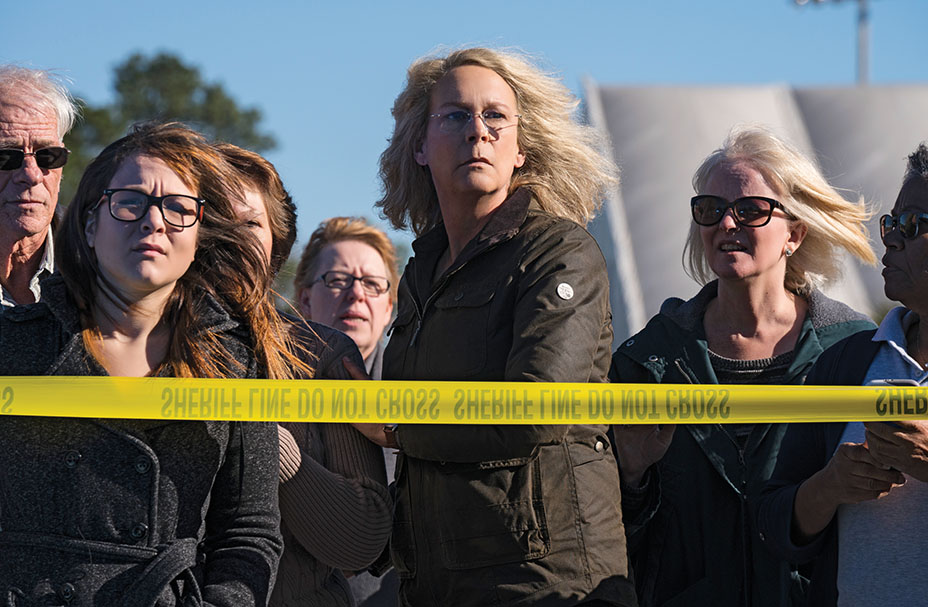 The true test of the slasher movie’s continued relevancy and evolution will come on Friday, when Michael Myers returns to theaters in David Gordon Green’s Halloween. Eschewing the story of teenage babysitters, Halloween looks like it will pick up some of the domesticated aspects of modern horror in its aim to tell a story about adults. But it’s impossible to fully extract Michael Myers from the slasher movie subgenre, so the biggest question facing the film is not only what a brand like Halloween will do for the future of slasher movies but how it will help further the subgenre’s evolution.

There’s little doubt that audiences will show up on opening weekend to see Michael Myers once again face off against Laurie Strode, but whether there’s an audience beyond that remains a mystery. Although there’s finally been some forward motion on the long-stalled Friday the 13th property, perhaps Halloween will prove to be the tipping point that makes it happen? But established icons like Freddy, Jasonand Michael are easier to fill seats for than new properties. If the slasher movie is going to truly make a comeback it has to be one where new franchises, which have no preconceived notions on what should happen, are allowed to thrive as well. Halloween could be the film that brings the slasher movie back into the house, where it can stand alongside Get Out and Hereditary in the parlor, or become a franchise trend-setter alongside It and The Conjuring films. Or it could simply remain just outside the window, the slasher still shifting in the dark until it manages to find a way back in with a message that we need to hear until it hurts.

New 'Halloween' Bets That Nothing Else Matters But the Original