[This story contains spoilers for Happy Death Day 2U]

Happy Death Day 2U — a sequel to Happy Death Day, the tongue-in-cheek 2017 slasher hit that’s essentially a combination of Groundhog Day and Scream — simultaneously is and isn’t better than its predecessor. For better and worse, Happy Death Day 2U was seemingly made with the goal of addressing, expanding and improving on the original film’s formula. Some of these intentions are broadcast to viewers before the film even begins, with a trifurcated version of the Universal Studios logo. This is a cute and knowing wink at viewers who have already seen Happy Death Day, a film that kicks off with a time loop-style visual tic that stalls and restarts the Universal’s pre-credits logo sequence twice before allowing this scene to fully play out (for the third time). Now, in Happy Death Day 2U, the Universal logo rolls three times across three vertically-separated rectangular segments. It’s a fun gag, but only if you know that you’re being offered a secret handshake.

Writer/director Christopher Landon’s Happy Death Day 2U offers fans of the first film plenty of fan service in canny, immodest portions. Remember that protagonist’s catchphrase? Or that other one’s dark secret? How about this one supporting character’s defining quirk? If you can remember it, this film probably has a callback to it. The fact that Landon assumes that viewers have a certain foundation of knowledge is refreshing given how much hand-holding most horror filmmakers do in sequels in order to ingratiate themselves to the widest possible audience.

Really, the biggest difference between Happy Death Day and Happy Death Day 2U is that the makers of the latter film assume viewers already know who their characters are, what sort of emotional stakes ground their actions and how the series’ central storytelling conceit works: a mysterious Groundhog Day-esque time loop forces college victim/co-ed Tree (Jessica Rothe) to relive the same day over and over until she can solve her own murder. And by assuming that viewers already get certain tropes and characters — most of which are quickly re-introduced through expository dialogue and/or flashbacks — Landon frees himself and his collaborators up enough to improve on the first movie’s deliberately schematic formula. In that way, Landon — more than Happy Death Day screenwriter Scott Lobdell — also encourages greater audience participation/engagement in Happy Death Day 2U, since Landon’s scenario strays farther from the first film’s Scream-like meta-slasher narrative than Lobdell’s does.

Happy Death Day is, for the most part, exactly what it looks like: a playful slasher movie that uses a Groundhog Day-like premise to stretch out (instead of move beyond) the slasher sub-genre’s tropes. The only major difference between Happy Death Day and Scream — beyond their respective tones, influence and effectiveness — is that Happy Death Day was made about 20 years after Scream. Neither Happy Death Day screenwriter Scott Lobdell nor Scream writer Kevin Williamson broke the horror movie mold when they called attention to “the rules” of the slasher genre; really, they both tweaked those rules (and in equally novel and entertaining ways). Still, if anything sets Happy Death Day apart from other post-Scream slasher films, it’s that Lobdell not only assumes that his audience is hip to the slasher genre’s tropes, but is also inherently interested in deconstructing (rather than repeating) the slasher formula. Unfortunately, Happy Death Day doesn’t go far enough towards that end, though it works pretty well as a sci-fi-enhanced whodunnit. 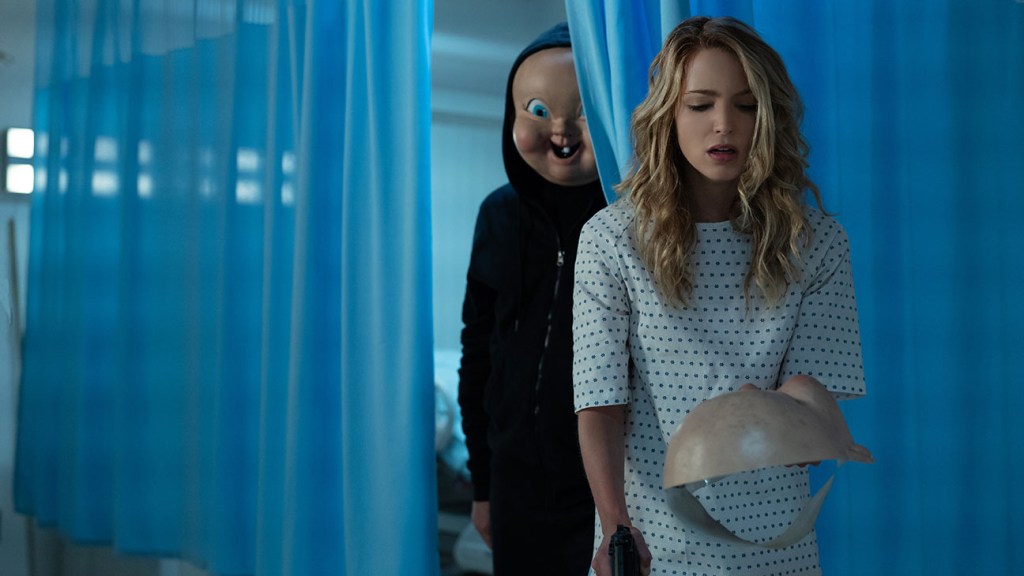 The first Happy Death Day does not, however, work nearly as well as a meta-reflexive horror film since most of the conventions that Lobdell toys around with are, even before 2017, already so shopworn and retrograde that simply pointing them out doesn’t accomplish much. The most obnoxiously expressed of these conventions has to be Lobdell’s needlessly exaggerated depiction of Tree and her fellow sorority sisters at Kappa Pi Lambda. The Kappas are led by Danielle (Rachel Matthews), a hatefully shallow antiheroine who, in the first film, reflects the worst aspects of Tree’s superficial character. Danielle’s main interests are: partying, dieting and hooking up with boys. She talks like a stereotypical Valley Girl and is only really worried about how she looks on camera, who’s looking at her and what she can do to keep her audience’s attention.

Tree isn’t much different at the beginning of Happy Death Day, which gives her story a faintly unpleasant arc. When we first meet Tree, she is wasted, has woken up in a stranger’s bed and soon complains about how shabby her accommodations are: “Am I in a dorm room??” Minutes later, Tree throws out a homemade cupcake that her seemingly loyal and relatively modest roommate Lori (Ruby Modine) made just for her: “Too many carbs,” Tree says with a cartoonishly insincere shrug. Mind you: Tree first throws out that cupcake long before anyone in the film suspects that Lori is responsible for Tree’s repeated murders. Tree’s character may improve over time, but she still basically has to overcome her glaring dumbness. Which is a great look for a post-Scream horror film: making fun of your heroine because, uh, she’s a dumb blonde? Really?

Like it or not, Happy Death Day is as moralistic as a regular ol’ slasher movie, right down to Tree’s superficially expressed lady problems, namely: her fears of pregnancy (with a married man) and her catty frenemy relationship with Lori. The fact that Lobdell ties both of these ideas together at the end of Happy Death Day makes that film’s ending doubly gross: we not only learn that Tree’s would-be killer isn’t (as she, and therefore we, are led to suspect) being manipulated by the very-married Dr. Gregory Butler (Charles Aitken), but rather by Lori, who apparently has the hots for Gregory, too? So … unlike slasher films, which generally make a spectacle of the gruesome (but arousing!) murders of sexually active women, Happy Death Day pits two women against each other because one is having sex, while her killer wants to have sex. What a twist!

Thankfully, Happy Death Day 2U is better than Happy Death Day in other ways. For starters: Rothe, who capably out-acts weak material in Happy Death Day, gets to do a lot more than just sigh, groan and strut across Bayfield University’s campus. That’s mostly because Happy Death Day 2U has a busier (though not necessarily more complicated) plot: Tree inadvertently stumbles into a parallel universe after a quantum mechanics-related experiment goes wrong. Rothe’s revamped heroine is also much more fun to watch in Happy Death Day 2U since Landon upgrades Tree — and Phi Vu’s Ryan, the other standout character (and performance) in the first Happy Death Day — in order to give viewers more of what they (understandably) liked about the first movie. It also helps that Danielle’s dialogue is not, in Happy Death Day 2U, merely a reflection of her Valley Girl personality, but rather a more general clueless-ness (even if the scene where she pretends to be a blind foreign exchange student in order to distract Happy Death Day 2U‘s mustache-twirling Dean is easily the sequel’s worst scene). Still, what matters most about Happy Death Day 2U‘s characterizations is: Tree isn’t just eliminating suspects, but is also constantly dealing with her own emotional baggage. Finally: Rothe gets to play a protagonist worth caring about!