It’s 8:20 a.m. on a recent Thursday in Brentwood, and Heidi Fugeman Lindelof is rearranging granola parfaits and lox platters. “I’m always in the mood to talk about reproductive rights,” says the activist and wife of TV and film producer Damon with a laugh, as TriStar president Hannah Minghella and producer Amy Baer file into the living room, where photos of the Lindelofs with such high-octane politicos as the Clintons, the Obamas and Nancy Pelosi pepper the built-in shelves.

This gathering is not about snagging a selfie with Hillary. The 30 women — members of a Westside PAC called the Los Angeles Women’s Collective, co-founded by ICM Partners political strategist Hannah Linkenhoker — have shown up before heading to their office or studio lot to talk policy issues with Maya Rupert, senior director at the Center for Reproductive Rights. As Rupert ticks off threats to Roe v. Wade, guests roll their eyes and groan. Everyone is fired up.

A heady movement of Hollywood women has been flourishing across Los Angeles since Donald Trump won the 2016 election — and operating on a parallel track alongside the more publicized Time’s Up. Call it kitchen-table activism: Some, like Lindelof and Sony Pictures Animation president Kristine Belson, meet at private homes on the Westside or in Hancock Park on weekend nights to postcard for Democratic candidates like Katie Hill for California’s 25th district congress seat; others take over local community centers to brainstorm ways to support racial justice.

While top Hollywood executives, creatives and wives are members and leaders, these are mostly small, neighborhood-based groups, not boardroom-powered programs (i.e., Universal Pictures chairwoman Donna Langley serving on the board of Vital Voices, which seeks out women leaders to invest in) or star-packed events (Demi Moore and Connie Britton hosting New York Sen. Kirsten Gillibrand’s May 31 reception at Eric Buterbaugh Gallery) or high-profile media powwows (Willow Bay, wife of Walt Disney chairman and CEO Bob Iger, leading a #RaiseYourVoice conversation with guest Sheryl Sandberg at the February 2018 Makers Conference). Many of these groups don’t even have websites. Still, the drive to organize, raise money and make change is palpable at these intimate industry gatherings across town. 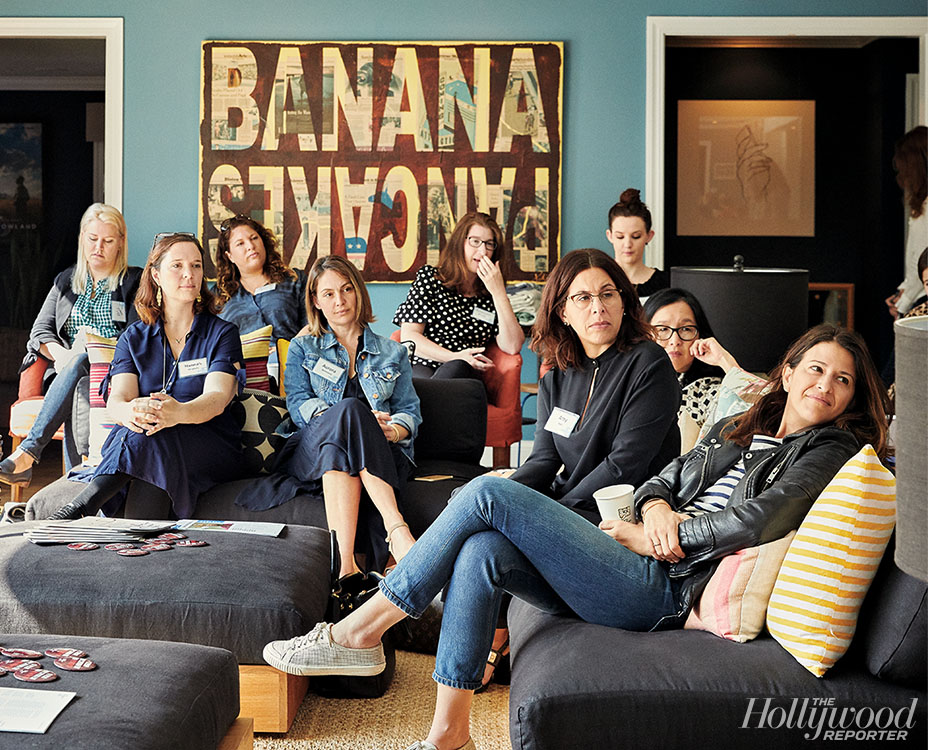 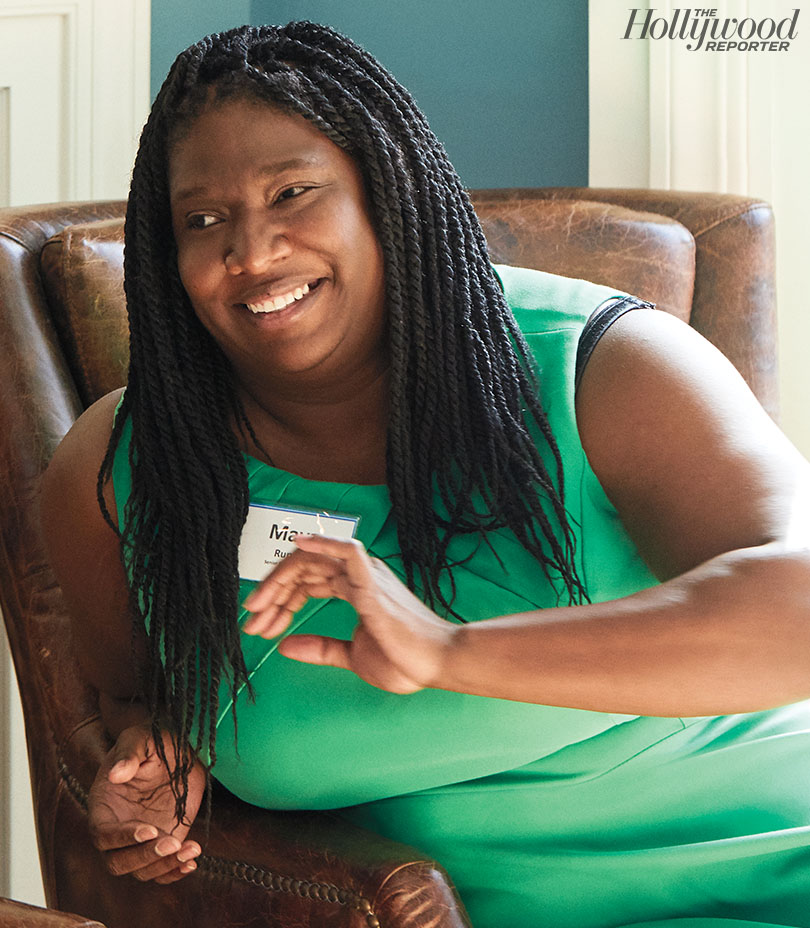 “In my 30 years of working in L.A., I haven’t seen this level of excitement and activism,” says political campaign strategist Lara Bergthold, principal partner at the issue-driven communications firm Rally and executive director of the Lear Family Foundation. “Women in the entertainment industry are educating themselves about the fundamental aspects of democracy rather than just writing checks.”

At one of the bimonthly Women’s Forum meetings at the Hancock Park home of Marina Black (husband is Batman v Superman: Dawn of Justice screenwriter David Goyer), the scene is equally intense. Pizza boxes from Jon & Vinny’s are open on the kitchen island; bottles of rosé sit on ice atop the bar. Tonight, Christina Reynolds, a vp at D.C.-based Emily’s List, is urging guests to support female candidates like Stacey Abrams for governor of Georgia or California’s Nanette Barragan for U.S. representative. Following an off- the-cuff Q&A heightened by a few F-bombs, the 40 women discuss a call to action: adopt a female candidate, make a campaign donation, post on social media to spread the word. “Right now, it’s: How do you pick one issue over the other? We’re all more focused on the crazy person who’s tweeting out of the White House every day,” says Sony senior vp Gloria Hann, who after the 2017 Women’s March co-organized Women’s Forum, which includes actress Lizzy Caplan and Laura Dern’s producing partner, Jaywalker Pictures’ Jayme Lemons. 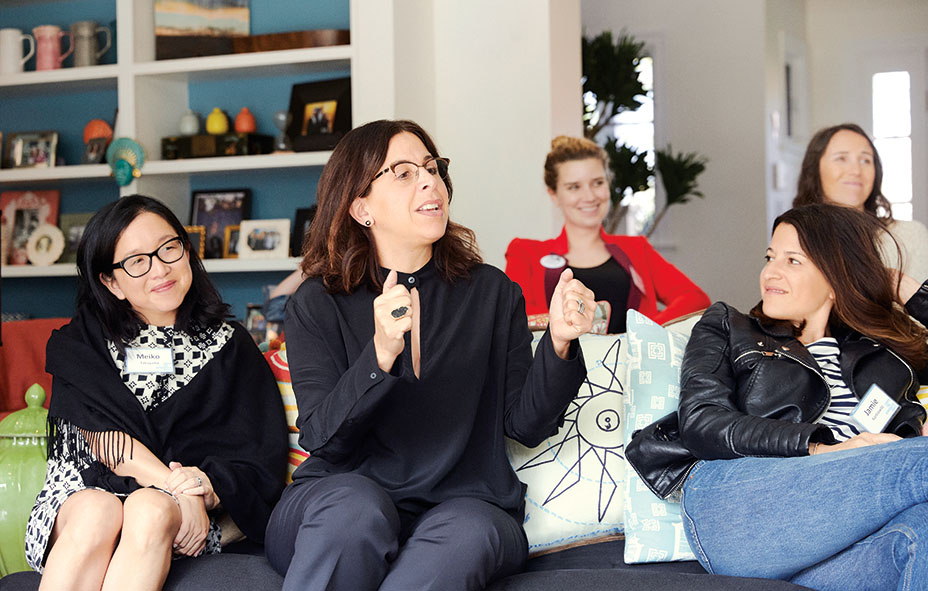 Many of these groups were born out of post-election dismay. The group Feminists in Action sprang from a Facebook message from former Inside Amy Schumer head writer Jessi Klein that read: “Anyone want to get together and cry?” They did. More than 100 women showed up to a community center in Silver Lake on a Sunday night in November, and they continue to meet every other week. “I love feeling like I am part of something, but I also appreciate that other members constantly remind us of why we’re there,” says Grace and Frankie actress June Diane Raphael. Since its inception, FIA has raised more than $65,000 with Bake America Great — funds that went to Black Lives Matter and Planned Parenthood — and canvassed to flip San Diego County’s Congressional District 49, up for grabs in the June 5 primary since January when Republican Darrell Issa retired.

Designated Survivor casting director Liz Dean, along with musician Inara George and TV writer Rina Mimoun, formed the group Take Back the 9th, referring to Nov. 9, 2016, the day after the election. “If there’s going to be a gift that Trump has given us, it’s that we’ve all been activated. The biggest challenge is hearing the news every day and wondering, ‘What else can I be doing?'” says Dean, whose group has hosted speakers like Indivisible co-founder Ezra Levin and gatherings to campaign for candidates like Hiral Tipirneni, the Democratic running to represent Arizona’s 8th Congressional District. 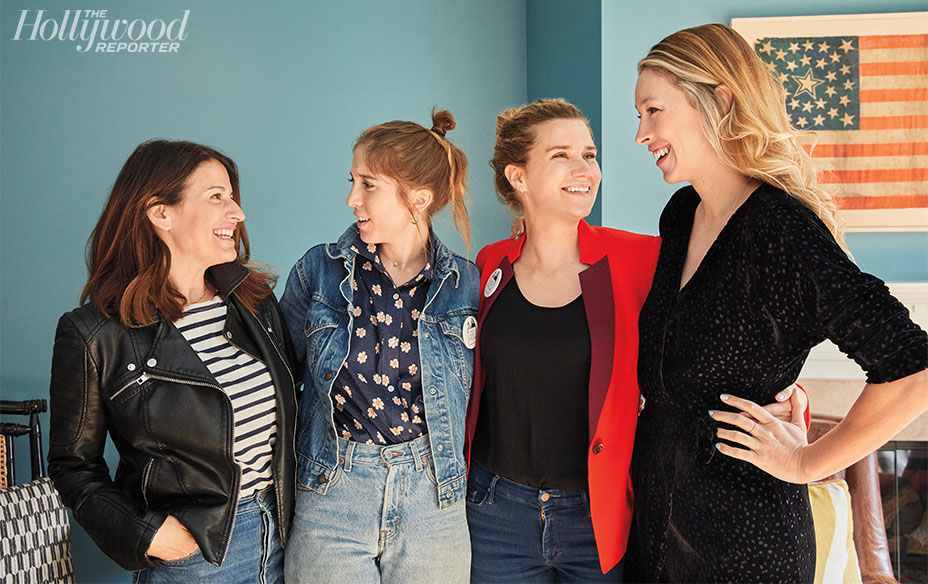 Group organizers say industry skills and, of course, connections, help further their political agendas. Thanks to countless casting auditions, Dean excels at connecting with strangers and organizing. (“I’m good at telling people what to do,” she jokes.) TV writer Jennifer Levin, who heads an unnamed group that includes Belson, sends out a profanity-strewn, often hilarious political newsletter that gets forwarded to dozens of industry friends, including Glow executive producer Jenji Kohan. And when women including Annapurna TV’s Sue Naegle and Gotham Group CEO Ellen Goldsmith-Vein — of the group March On — co-organized a fundraiser in March, they were able to tap major talent. “Hmmm. You all look like really good people with good hearts to me,” said a smiling Tiffany Haddish from the Comedy Store stage at the event, where she headlined with Maz Jobrani and Pod Save America‘s Jon Lovett. Lindelof thinks that Hollywood creatives could be doing more: “I watch these ads for the NRA and my jaw is on the ground. We have incredible talent in this town. I’m not saying we have to scare the shit out of people. I’m just, ‘Hello, why are we not writing ads for our causes?’ “ 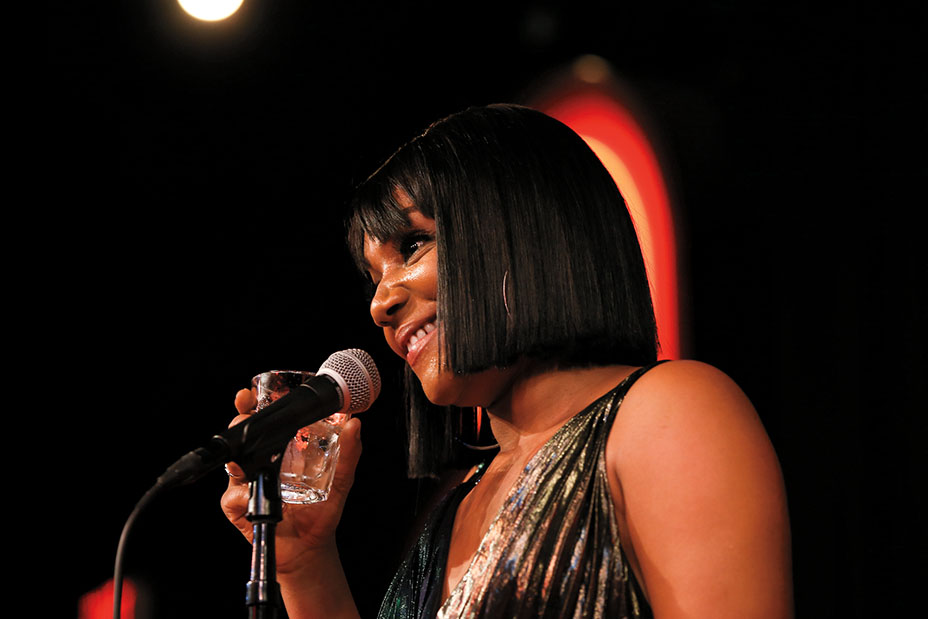 March On — with showbiz divorce attorney Laura Wasser; Imagine Television president Samie Kim Falvey; and Kristin Hahn, writer of the Jennifer Aniston starrer Dumplin’ — relies more on constant communication than face-to-face meetings. “A lot of the women are traveling around the world all the time, so we email,” says founder Lindsay Berger Sacks of the group, which has contributed to more than 23 congressional and senatorial candidates and political committees.

Ultimately, what has grown out of this grassroots momentum is another way for Hollywood women to connect. “It’s so refreshing to meet people not because of what you do professionally but because of what you are doing politically,” says comic Laura Mannino, who co-founded anti-gun lobbyist group Drain the NRA after the Las Vegas mass shooting in 2017. Her network boycotts companies affiliated with the gun lobby like TrueCar, which stopped offering a discount to NRA members in February.

And when it comes to political activism in L.A., the future, apparently, is truly female. No male advocacy groups surfaced after numerous inquiries during the reporting of this article, though men definitely attend events and write checks. “We women have it in us to juggle a million things and get them all done,” offers Hann by way of explanation. Lindelof sees it this way: “Men are just so used to running the show, and we are the ones who are constantly having to fight for our rights.” 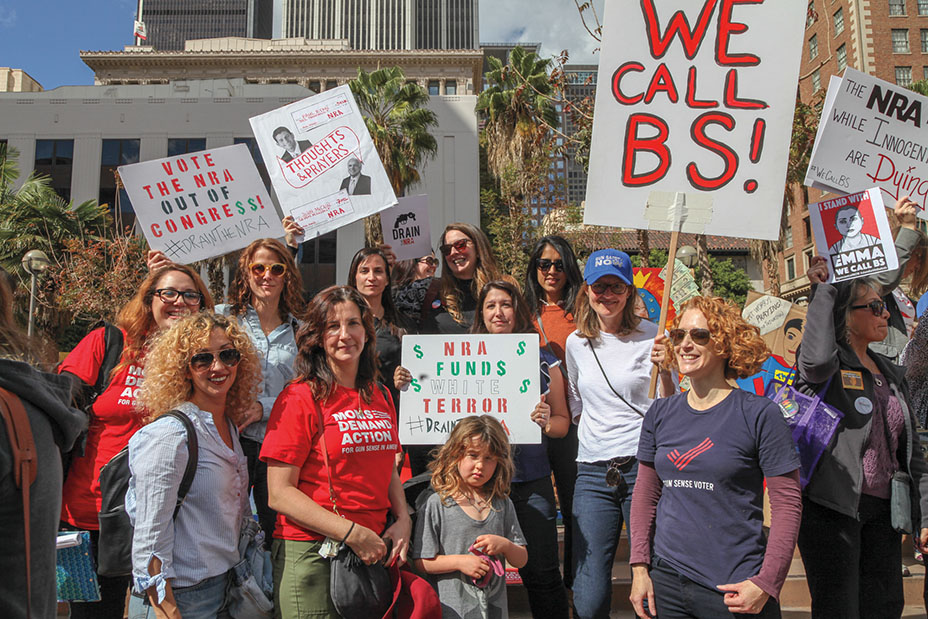 A verson of this story first appeared in the May 30 issue of The Hollywood Reporter magazine. To receive the magazine, click here to subscribe.