For five months, Margot Robbie spent four hours a day, five days a week, learning to ice skate, becoming obsessed with the sport. “I was honestly terrified that I wouldn’t be able to pull it off,” says the 27-year-old Australian actress. “We were just a few weeks from shooting, and I was still struggling to find my outside edges. I just thought I was never going to get them, and then, one day, it just clicked.”

In I, Tonya, Robbie plays the most notorious figure in figure skating history, Tonya Harding, the young ice queen from Portland, Oregon, who became a tabloid sensation when her rival at the 1991 World Championships, Nancy Kerrigan, was forced out of the competition after getting whacked on the knee with a baton. It became the most scandalous act of sabotage in the history of the sport.

“I was grateful we had the freedom to go as far with these characters as we did,” says Robbie of the skating enemies. “If anyone had invented them, I think they would have been tempted to be more subtle. But real life isn’t subtle — real life is crazier than what we see in films.” 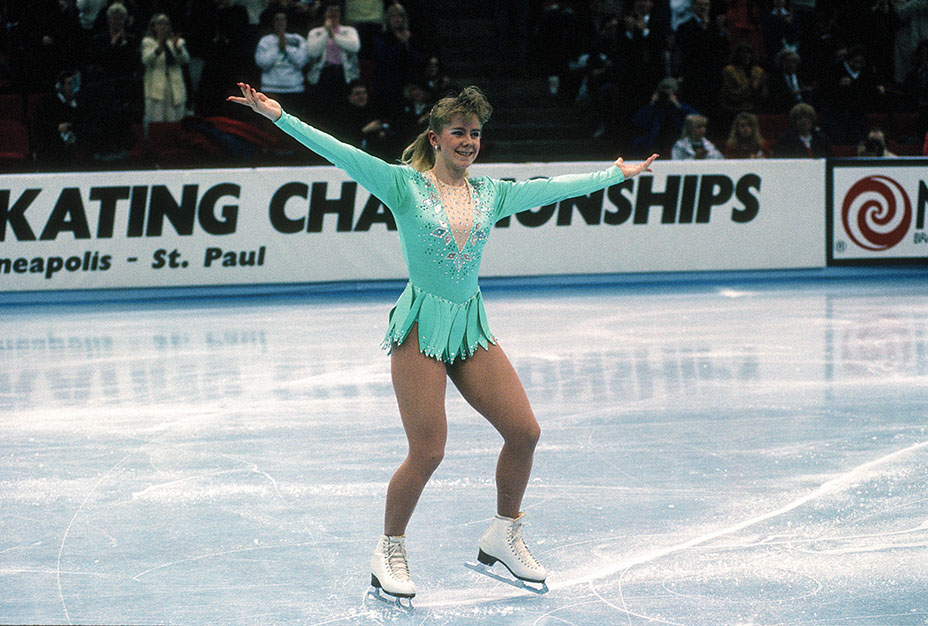 The idea for a Tonya Harding feature came to screenwriter Steven Rogers (best known for such romantic comedies as P.S. I Love You and Kate & Leopold) one night in 2014 while channel surfing with his niece, who forced him to watch an ESPN documentary on the Harding-Kerrigan affair. He was hooked from the first triple Salchow jump. Unbridled ambition, out-of-control greed, bitter jealousies and a media frenzy that rivaled O.J.’s — what wasn’t to love? But instead of sympathizing with the victim — the graceful, elegant Kerrigan, whose career was destroyed by that whack to the kneecap — Rogers found himself rooting for the trashy blonde whose then-husband, Jeff Gillooly, was behind the attack. Indeed, Kerrigan (played by Caitlin Carver) barely gets any screen time in I, Tonya. “The thing that bothered me is that [Harding was treated] like a punchline by the media,” says Rogers. “It was the first time [the media] cared less about being accurate than about filling the space, which is now an epidemic.”

Rogers tracked Harding down in Sisters, Oregon, and met with her for hours, sharing his ideas for a movie about her life. After she signed over her life rights, he went searching for her ex-husband, who changed his name after the scandal and fell off the media radar. “His story and Tonya’s stories were wildly contradictory,” Rogers says of Gillooly. “I thought, ‘That’s my in! I’ll put all the sides on the screen and let the audience decide.’ “

Rogers’ “he said, she said” format includes faux interviews with Harding and Gillooly (played by Sebastian Stan) telling conflicting versions of the events that are then spliced throughout the film (Harding claims she was unaware that Gillooly had orchestrated the attack, hiring a friend to baton Kerrigan’s knee; Gillooly insists the plan was just to scare Kerrigan, but it spiraled out of control). But more than the media did at the time, Rogers’ script digs deeper, exploring Harding’s tough blue-collar upbringing (her mom, played by Allison Janney, beat her as a child) and abusive marriage to Gillooly (who also beat her), while also focusing on Harding’s socioeconomic disadvantages in what was traditionally considered an upper-middle-class sport.

When the script was done, Rogers sent it around town, including to several independent producers, figuring the material would have better luck as an indie. One of those companies was LuckyChap Entertainment, a production house launched by Robbie and her then-boyfriend, Ackerley, neither of whom, being Australian and British, respectively, had ever heard of Harding. “We read it and went down a Wikipedia hole,” says Ackerley. “It was just such a crazy story with such amazing characters.”

At the time, Robbie was best known for her role opposite Leonardo DiCaprio in The Wolf of Wall Street and as Harley Quinn in Suicide Squad, but she was itching to show a wider range. Still, she hardly seemed a natural fit. “There were concerns,” admits Bryan Unkeless, who also had been sent a copy of Rogers’ script and had signed on as a producer. “Robbie is Australian — can she do the accent? Can she make the physical transformation?” Rogers, though, knew right away that Robbie could work: “There was this intensity behind Margot’s eyes,” he says. “And when I’d interviewed Tonya, she’d had that same intensity when she’d talk about landing the triple axel.”

After Robbie was cast, Janney signed on to play Harding’s acerbic mother, LaVona Golden, who became famous during the scandal for giving media interviews while wearing a raccoon coat and keeping a pet bird on her shoulder. It was an easy choice; Rogers, a good friend of Janney’s, had written the part for her. Casting Gillooly, Harding’s first love, was more challenging. “It wasn’t easy to find someone who would be able to find that balance of being very violent and yet have some semblance of humanity,” says Unkeless. They chose the actor who plays Winter Soldier in the Avengers films. “I must have read the script 60 times,” says Stan, who walked around New York listening to Rogers’ interview with Gillooly to get his voice right.

The producers brought on Craig Gillespie (Lars and the Real Girl) to direct. “We never wanted to make a movie pointing a finger at these people or having a joke at their expense,” says Ackerley. “The comedy of the movie comes through the madness of situations they found themselves in. Craig understood that straight from the start.”

For the actors, prepping for the film took different forms. While Stan grew a mustache, Robbie spent hours and hours on the ice, training with choreographer Sarah Kawahara. “When you’re a kid, you’re fearless, but starting at 26 years old, I had a lot of fear,” says Robbie, who did end up with a herniated disk in her neck, an injury she got early on in her training but didn’t realize until she was a week into shooting and her arms started going numb. But by the time principal photography started in Atlanta in January 2017, Robbie was able to shoot entire sequences of Harding’s routines. And, in a testament to Harding’s rare abilities, the producers struggled to find a double who could perform the triple axels needed as part of Harding’s story. “There’s been only six women since Tonya who have done a triple axel,” says Ackerley. “Even if there was one who was doing it today, she’d be training for the Olympics and couldn’t risk doing it for the film.” They ended up using visual effects to pull off the stunt.

To add weight to the actress’ slender frame and create a more muscular silhouette, costume designer Jennifer Johnson thought about adding padding to Robbie’s costumes. But that idea got nixed. “It’s not that easy to skate with padding,” explains Johnson. “Robbie’s acting and her movement and her ability to feel comfortable on the ice were more important.” Instead, Robbie found another way to change her stature. “She had this more masculine walk — she gained muscle by somehow shifting her shoulders and her hips,” says Johnson. “It was shocking — it was really transformative.”

Financier AI Film put up the $11 million budget, just enough for a 31-day shoot (“The budget should have been double,” says Unkeless. “We had everyone working for nothing.”). The production was so rushed, there were days when Robbie and Stan were playing their characters as teens in the morning, 20-somethings at midday and in their 40s by sunset. Once, they did 20 setups in a day, a nearly impossible feat. “I kept being told by the bond company that I couldn’t do it, and I would just think, ‘I have to do it,’ ” says Gillespie. 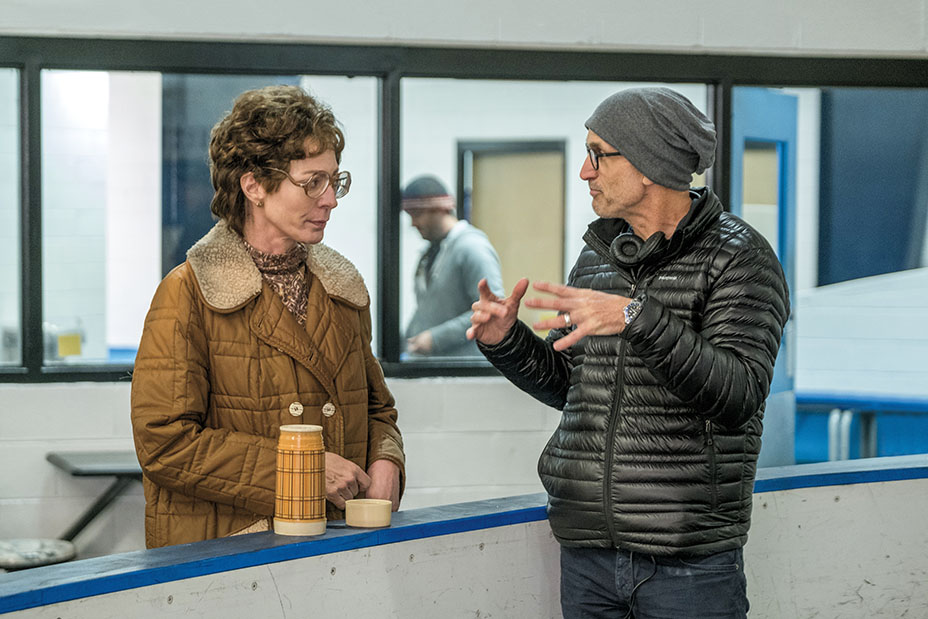 But the hardest thing to pull off, the triple axel of the production, was getting the tone right in the editing bay. The film has moments of comedy and violence, of shock and sympathy. “It’s a pretty narrow pathway to walk,” says editor Tatiana S. Riegel. “It’s a challenge to deal with domestic abuse and also have people laugh.”

When the movie had its world premiere at the Toronto Film Festival in September, it was runner-up for the fest’s only honor, the People’s Choice Award. New distribution companies Neon and 30West quickly scooped it up for $5 million and scheduled its release firmly in awards season, on Dec. 8, with a wider release set for January to coincide with the Winter Olympics.

Harding also recently saw the finished film. “There were a few things she didn’t agree with because obviously there’s Jeff’s point of view in there,” says Robbie, “but for the most part she said we did a good job.” In other words, I, Tonya, the story of two of the unluckiest skaters ever to glide on ice, nailed its landing.